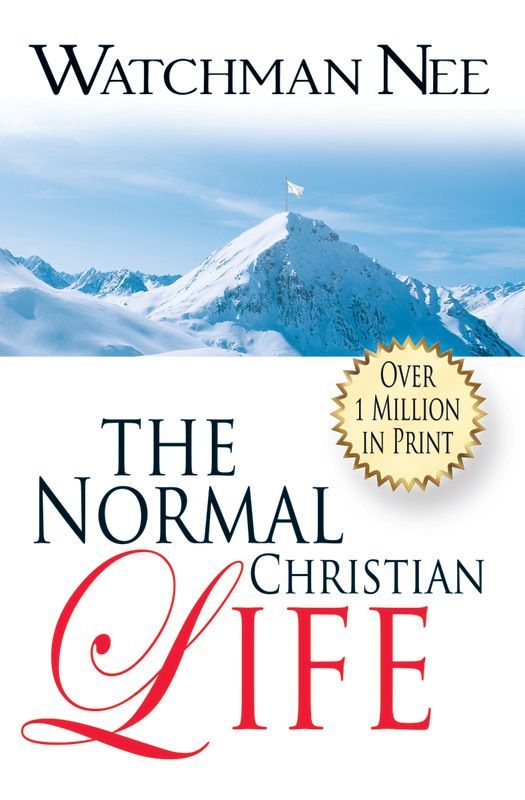 Scripture quotations are from the
American Standard Version
, 1901.

by The Lockman Foundation. Used by permission.

Scripture quotations referenced as the Darby translation are from the
Holy Bible, A New Translation
by J.N. Darby, 1890.

Variations in wording of Scripture are the author’s paraphrase.

Italics in Scripture are the emphasis of the author.

1. The Blood of Christ

2. The Cross of Christ

3. The Path of Progress:
Knowing

4. The Path of Progress:
Reckoning

5. The Divide of the Cross

6. The Path of Progress:
Presenting Ourselves to God

9. The Meaning and Value of Romans 7

10. The Path of Progress:
Walking in the Spirit

12. The Cross and the Soul Life

13. The Path of Progress:
Bearing the Cross

T
HE MINISTRY of Watchman Nee had been known in English only from transcriptions of his spoken messages in tracts and magazine articles when, in 1957,
The Normal Christian Life
was first published in Bombay and was at once accorded a widespread welcome. Compiled from such records and from private notebooks, this collection was edited in the author’s absence, and is based upon addresses originally given by Mr. Nee during and shortly after a visit to Europe in 1938–39.

From the day in 1920 when, as a college student, he found the Lord Jesus Christ as his Savior during the visit of a Chinese evangelist to his native city of Foochow, Nee Tosheng gave himself without reserve to God for work among his own people. Over the years he became widely known in China as a gifted preacher of the gospel and an original expositor of the Word, whose ministry bore remarkable fruit in individuals and in many groups of spiritually virile Christians. This book sets forth something of his personal
understanding of the Christian life toward the end of those first years of unrestricted service for his Lord.

In the twenty years that have followed, the church of God in China has passed through recurring periods of the severest testing with but brief interludes of respite. The author, together with many of those associated with him in work and witness, has had his full share of these experiences right up to the present. It is perhaps not surprising, therefore, that his ministry should come to us today with freshness and power. Many have already testified to the transformation this book has wrought in their lives through new discoveries of the greatness of Christ and of His finished work on the cross.

The demand now for a new edition has made possible a further careful revision of the text. Readers are again reminded that this is a compilation of spoken addresses and not, despite superficial appearances, a systematic treatise of Christian doctrine. It is to be approached not as an intellectual exercise, but as a message to the heart. Read thus it will, I believe, speak as from the Spirit of God Himself with challenging power.

The Blood of Christ

W
HAT IS the normal Christian life? We do well at the outset to ponder this question. The object of these studies is to show that it is something very different from the life of the average Christian. Indeed, a consideration of the written Word of God—of the Sermon on the Mount for example—should lead us to ask whether such a life has ever in fact been lived upon the earth,
save only by the Son of God Himself.
But in that last saving clause lies immediately the answer to our question.

The apostle Paul gives us his own definition of the Christian life in Galatians 2:20: It is “no longer I, but Christ.” Here he is not stating something special or peculiar—a high level of Christianity. He is, we believe, presenting God’s normal for a Christian, which can be summarized in these words: I live no longer, but Christ lives His life in me.

God makes it quite clear in His Word that He has only one answer to every human need: His Son, Jesus Christ. In all His dealings with us, He works by taking us out of the
way and substituting Christ in our place. The Son of God died instead of us for our forgiveness; He lives instead of us for our deliverance. So we can speak of two substitutions: a Substitute on the cross who secures our forgiveness and a Substitute within who secures our victory. It will help us greatly, and save us from much confusion, if we keep constantly before us this fact: God will answer all our questions in one way and one way only, namely, by showing us more of His Son.

Our Dual Problem: Sins and Sin

We shall take now as a starting point for our study of the normal Christian life that great exposition of it which we find in the first eight chapters of the epistle to the Romans, and we shall approach our subject from a practical and experimental point of view. It will be helpful, first of all, to point out that this section of Romans naturally divides into two and has certain striking differences in the subject matter of its two parts.

The first eight chapters of Romans form a self-contained unit. The four and a half chapters from 1:1 to 5:11 form the first half of this unit and the three and a half chapters from 5:12 to 8:39 the second half. A careful reading will show us that the subject matter of the two halves is not the same. For example, in the argument of the first section, we find the plural word “sins” given prominence. In the second section, however, this is changed, for while the word “sins” hardly occurs once, the singular word “sin” is used again and again, and is the subject mainly dealt with. Why is this?

It is because in the first section it is a question of the sins I have committed before God, which are many and can
be enumerated, whereas in the second it is a question of sin as a principle working in me. No matter how many sins I commit, it is always the one sin-principle that leads to them. I need forgiveness for my sins, but I need also deliverance from the power of sin. The former touches my conscience, the latter my life. I may receive forgiveness for all my
sins
, but because of my
sin
still have no abiding peace of mind.

When God’s light first shines into my heart, my one cry is for forgiveness because I realize I have committed sins before Him. But when once I have received forgiveness of sins, I make a new discovery, namely, the discovery of sin. I realize not only that I have committed sins before God, but that there is something wrong within. I discover that I have the nature of a sinner. There is an inward inclination to sin, a power within that draws to sin. When that power breaks out, I commit sins; I may seek and receive forgiveness, but then I sin once more. So life goes on in a vicious circle of sinning and being forgiven and then sinning again. I appreciate the blessed fact of God’s forgiveness, but I want something more than that: I want deliverance. I need forgiveness for what I have done, but I need also deliverance from what I am.

God’s Dual Remedy: The Blood and the Cross

Thus in the first eight chapters of Romans, two aspects of salvation are presented to us: first, the forgiveness of our
sins
and second, our deliverance from
sin
. But now, in keeping with this fact, we must notice a further difference.

In the first part of Romans 1 to 8, we twice have reference to the blood of the Lord Jesus in 3:25 and 5:9. In the second part, a new idea is introduced in chapter 6, verse 6, where we are said to have been “crucified” with Christ. The
argument of the first part gathers around that aspect of the work of the Lord Jesus which is represented by
the blood
shed for our justification through “the remission of sins.” This terminology, however, is, not carried on into the second section, where the argument centers now in the aspect of His work represented by
the cross
, that is to say, by our union with Christ in His death, burial and resurrection.

The Problem of Our Sins

We begin, then, with the precious blood of the Lord Jesus Christ and its value to us in dealing with our sins and justifying us in the sight of God. This is set forth for us in the following passages:

God commendeth his own love toward us, in that, while we were yet sinners, Christ died for us. Much more then, being now justified by his blood, shall we be saved from the wrath of God through him. (Rom. 5:8–9)

Being justified freely by his grace through the redemption that is in Christ Jesus: whom God set forth to be a propitiation, through faith, in his blood, to show his righteousness because of the passing over of the sins done aforetime, in the forbearance of God; for the showing, I say, of his righteousness at this present season: that he might himself be just, and the justifier of him that hath faith in Jesus. (Rom. 3:24–26)

We shall have reason at a later stage in our study to look closely at the real nature of the Fall and the way of recovery. At this point we will just remind ourselves that when sin came in it found expression in an act of disobedience to God (Rom. 5:19). Now we must remember that whenever this occurs the thing that immediately follows is guilt.

Sin enters as disobedience, creating first of all a separation between God and man whereby man is put away from God. God can no longer have fellowship with him, for there is something now which hinders, and it is that which is known throughout Scripture as
sin
. Thus it is first God who says, “They are all under sin” (Rom. 3:9). Then, second, that sin in man, which henceforth constitutes a barrier to his fellowship with God, gives rise in him to a sense of guilt—of estrangement from God. Here it is man himself who, with the help of his awakened conscience, says, “I have sinned” (Luke 15:18). Nor is this all, for sin also provides Satan with his ground of accusation before God, while our sense of guilt gives him his ground of accusation in our hearts; so that, third, it is “the accuser of the brethren” (Rev. 12:10) who now says, “You have sinned.”

Gooney Bird Is So Absurd by Lois Lowry
The Well of Loneliness by Radclyffe Hall
Taking It All: A Hellfire Riders MC Romance (The Motorcycle Clubs Book 6) by Wilde, Kati
Wild Lavender by Belinda Alexandra
Wanted with Murder (A Rilynne Evans Mystery, Book Five) by Vakey, Jenn
The Love of Her Life by Harriet Evans
Untamed Hearts (A Highland Hearts Novella) (Entangled Edge) by McCollum, Heather
The Waking (The Upturned Hourglass) by T.K. Burckhardt
Just Can't Get Enough by Hodges, Cheris
Bodyguards by Kallysten