Read The One You Fear Online

The One You Fear 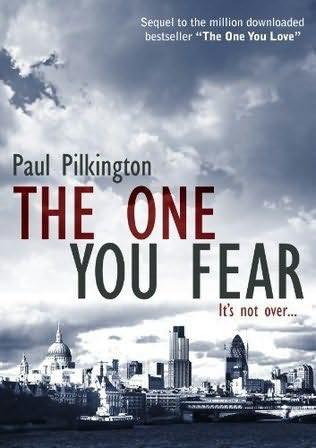 TOYF
The One You Fear

This ebook is licensed for your personal enjoyment only. This ebook may not be resold or given away to other people. If you would like to share this book with another person, please purchase an additional copy for each recipient. If you're reading this book and did not purchase it, or it was not purchased for your use only, then please return to Amazon and purchase your own copy. Thank you for respecting the hard work of this author.

Also by Paul Pilkington and available on Kindle

The One You Love

Someone to Save You

View here at the Kindle Store

For those who asked for more. And for my wonderful family.

Margaret Myers held the remote control tightly in her hand and pointed it towards the sleeping television. She pressed the stand-by button and the box sprang to life, illuminating the otherwise dark lounge. She watched, transfixed and scared, as the images played out in front of her. A policewoman, arms and legs pounding, was running down a rain-sodden street, giving chase to a man. She looked just like that girl – the one who had ruined it all with her wicked ways. The programme frightened Margaret. Programmes like that gave you funny ideas.

Two weeks ago the television had spoken to her.

It told her that she should end it all.

Margaret Myers changed channel, her hand shaking like a jackhammer. The lottery draw – this was better. She didn’t like the police programmes; didn’t like them at all.

She remembered the time when the whole family would sit down in front of the television on a Saturday night and watch the quiz shows, their dinners on their laps – herself, her husband Peter, and her dear Stephen. Back then everything was good.

But that was then, and this was now.

A man and woman had visited and told her that Peter had been arrested. He’d done something wrong. She couldn’t remember what. They wanted her to come with them, to spend some time resting in the same place they had taken her to a few weeks ago – the hospital that was full of disturbed people.

She hadn’t been fooled by their weasel words and plastic smiles. This time she wasn’t going anywhere. They thought she was stupid, or crazy, or both. But she knew what they were up to. They had taken her son and her husband, but they wouldn’t take her.

The draw was starting. She leaned forward in anticipation as the arms in the machine kicked up the balls, before sucking one up through the plastic tube and spitting it out down the chute.

And the first ball is… number twelve.

She caught her breath. Number twelve. Stephen had been born on the twelfth of December.

Again a ball was sucked up the tube.

And the second ball is… number twelve.

She blinked, shaking her head. It was a mistake. Someone had placed a duplicate ball in the machine. Why hadn’t people noticed?

And the third ball is… number twelve.

She jabbed at the controller, blackening the screen and sending the room back into darkness. For a few seconds she just sat there in the pitch black, breathing heavily, her hands curling into tight fists.

And then a noise – was it someone at the door?

At first she didn’t move, but just sat there in the darkness. Would somebody be calling at such a late hour? Maybe it had been her imagination.

But there was a definite knock this time.

Margaret Myers rose from the sofa and moved into the corridor, edging slowly towards the front door.

‘Hello. Who’s there?’ There was no answer. She grasped the door handle – but then she stopped herself. Maybe they had returned for her, to take her away to their place, and evict her forever from the family home.

They thought they were so clever.

‘Go away; I’m not coming with you. Leave me alone.’

Something was pushed through the letterbox. It fell onto the carpet, and she bent to pick it up.

She cradled the object in her hand, tears swelling in her eyes. ‘It can’t be.’

Then she grabbed the door and pulled it open.

‘It’s you,’ she said, breaking into a broad smile. ‘It’s really you.’ She threw her arms around him. ‘They said you were dead, but I always knew you’d come back to me.’

Emma Holden woke in a sweat, her head damp against the pillow. At first she didn’t know where she was. Then she remembered. She was in a luxury apartment a few miles outside the small Cornish seaside town of St. Ives, down in the far south-west of England. Dan had surprised her with the news that they were going away for a few days, from Friday until Tuesday. They’d both needed to get away from London for a while, just four weeks after the terrible events of Dan’s kidnap at the hands of Peter Myers. It had felt so claustrophobic in the capital, surrounded by all the raw, painful memories, so Emma was overjoyed at the chance to escape for a few days and release some of that pressure.

There was no reply. She reached across the double bed but Dan wasn’t there – the covers had been pulled back and, raising her head off the pillow, she saw that the bedroom door was ajar. She sat up and only then remembered the nightmare. It had been the same dream again, the third time in two weeks. Again it was her wedding. She and Dan were standing at the front of the congregation, filled with excitement and love. For a split second she turned away, and when she looked back, it was Stuart Harris next to her, smiling warmly. The service continued and when they reached the vows, first Stuart’s voice and then his face began to change. Suddenly it was Stephen Myers beside her. He looked older, but still had the same vacant stare and delusional smile. The priest announced, ‘You may now kiss the bride’ and Stephen Myers lunged at her, thrusting his mouth towards hers as she tried to fight him off.

Each time she had woken at that very same moment.

She got out of bed, went into the hallway and through into the main kitchen and living room. It was certainly an amazing apartment. The kitchen was full of top spec appliances, all of which were new – washing machine, dishwasher, oven, and espresso maker – which, by the smell of it, had just been used. The manager, who owned the majority of the apartments in the block, had met them on their arrival the previous day and explained that they had a refit in the spring.

Bright early-morning late-September sunlight was streaming through the patio doors at the far end. Dan was sitting outside on the small decking area, staring out to sea and over towards the town of St. Ives to the west. On the table in front of him was the freshly made coffee.

Dan didn’t seem to notice Emma’s approach – he was still staring into the distance as she reached him. ‘Morning,’ she said, taking the seat next to him. She noticed there were two cups of coffee on the table.

Dan smiled at her. ‘I woke up early and thought I’d try out our new machine.’ He gestured towards the cups.

‘You haven’t tasted it yet,’ he joked.

‘Actually it tastes great too, but I’ve got to admit, it was my second attempt. The first time I burned it. It was revolting so it went straight down the sink.’

‘It’s such an amazing view,’ Dan said, as they both looked out across the sea. A small fishing vessel was making its way from St. Ives towards open water. It looked so fragile, bobbing up and down on the waves like a toy. Even though it was a spectacularly sunny morning with a flawless blue sky, there was a keen wind whipping up the water into white tips.

Emma stole a glance at Dan; his short, dark brown hair was messy from sleep in the way that she always found so endearing. He still didn’t look himself. He had been injured physically during his time in captivity, but nothing too serious – mainly bruising, which had now healed. But mentally – well, Emma wasn’t sure. He hadn’t opened up yet about what had happened during those days at the hands of Peter Myers, or about how it had affected him. And although she was desperate to understand, so she could help, Emma didn’t want to press him. He needed to be ready to talk.

‘I’m worried about you,’ she said, not really intending to vocalise those thoughts.

Dan smiled sadly, as if he knew what she was talking about. ‘I’m okay, Em. It’s just going to take time to get over it all.’

Emma nodded. They were all finding it difficult. ‘You know, if you want to talk about it, if you think it would help, I’m always here for you.’

Emma snuggled into his side, as he placed a comforting arm around her. She closed her eyes, enjoying the brightness of the sun and the warmth of his body. ‘I was so scared. I thought I might never see you again.’

They stayed like that for a few minutes, just enjoying being close to one another. There hadn’t been much physical contact in the past month, but it wasn’t surprising, after all everyone had gone through.

‘How did you sleep?’ Dan asked. ‘You were tossing and turning a little.’

Emma raised her head off his chest. ‘Is that what woke you up?’

‘No. I was thinking about Peter Myers.’

She sat upright. ‘Really? What about him?’

‘I was wondering how he is.’

His admission came as a shock. They’d hardly spoken that man’s name since being reunited. ‘You’re concerned about him?’

‘Because of what happened to Stephen?’

Dan nodded, taking a sip of coffee. ‘Who knows how you’d react if you found out that your son or daughter had been murdered? Maybe you’d want to take revenge too. Maybe the anger would twist your morals, lead you to doing something you wouldn’t normally contemplate.’

‘I know it sounds crazy, feeling empathy for him – the man nearly killed Richard – but I can see how he might have got to where he is now.’

‘I don’t think it sounds crazy.’

‘He’ll probably go to prison for many years.’

Peter Myers had been charged with a litany of offences, including kidnapping and grievous bodily harm. He’d pleaded guilty to all charges, and had been remanded in custody, pending sentencing. There was little doubt that he would spend a long time behind bars for what he’d done. The sentence would surely have been longer if Richard hadn’t survived – he was currently up in Edinburgh, staying with friends and continuing his recovery and recuperation.

E. W. Hornung_A J Raffles 01 by The Amateur Cracksman
A Hint of Scandal by Tara Pammi
My One And Only by MacKenzie Taylor
The Strangers of Kindness by Terry Hickman
DeadEarth: Mr. 44 Magnum by Michael Anthony
El maestro iluminador by Brenda Rickman Vantrease
Ideal Marriage by Helen Bianchin
House of Small Shadows by Adam Nevill
Magnus Fin and the Ocean Quest by Janis Mackay
Trigger Warning: Short Fictions and Disturbances by Neil Gaiman