Read The Other Daughter Online 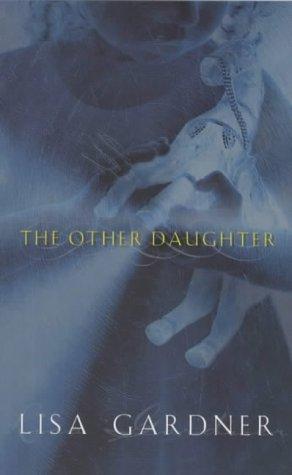 WHAT YOU DON'T KNOW CAN KILL YOU

In Texas a serial killer is executed, taking to his grave the identity of his
only child. In Boston a nine-year-old girl is abandoned in a hospital, then
adopted by a wealthy young couple. Twenty years later, Melanie Stokes still
considers herself lucky. Until...

Melanie had lost all memory of her life before the adoption, and now someone
wants to give it back. Even if it includes the darkest nightmare the Stokes
family ever faced: the murder of their first daughter in Texas. As Melanie
pursues every lead, chases every shadow in the search for her real identity, two
seemingly unrelated events from twenty years ago will come together in a
dangerous explosion of truth. And with her very life at stake, Melanie will fear
that the family she loves the most may be the people she should trust the least. 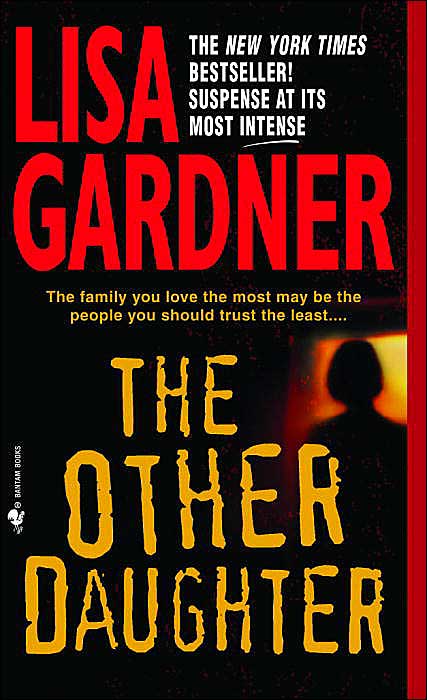 THE OTHER DAUGHTER
LISA GARDNER
Copyright © 1999 by Lisa Baumgartner

AS ALWAYS, I'M indebted to quite a few people for their expertise and patience in helping make this book a reality. Being myself, I took artistic license with a great deal of the information but tried to keep things as rooted in the real world as possible. All mistakes are mine, of course. Special thanks to:

Special Agent Nidia C. Gamba and Supervisory Special Agent John C. Ekenrode of the Boston Federal Bureau of Investigation healthcare fraud squad. I know I didn't have the space to do your job justice, but I hope you'll appreciate the fact that I tried.

Bob and Kim Diehl, former corrections officers for the Texas Department of Corrections. Not just anyone will answer e-mails from a total stranger, particularly a stranger inquiring about proper protocol for the electric chair.

The Arthritis Organization for the general information on AS and to my brother, who is living with it. The older we get, Rob, the more you are my hero.

Jennifer Carson, R.N., my dear roommate from college and one of the few healthcare professionals who doesn't mind answering all my inquiries about poisons. You've got a devious mind, Jenn, and I love you for it.

Finally, to my agent, Damaris Rowland, for riding this roller coaster with me, and to my new husband, the love of my life. I couldn't do this without you.

FANS OF THE death penalty in Texas will notice an immediate discrepancy in my novel — that a man is sent to the electric chair in 1977. In fact, Old Sparky was retired in 1964 after the execution of 361 men, and the death penalty was not carried out again until 1982, when Texas got lethal injection. Never let it be said that historical accuracy got in the way of a writer.

For the record, the Huntsville Prison Museum does exist and is an excellent source of information on the colorful world of the Texas Department of Corrections. Bonnie and Clyde are among the most famous prisoners documented there, though I like to think that Russell Lee Holmes would be worthy of similar notoriety. The Captain Joe Byrd Cemetery also exists in real life, and, yes, the day I visited it, there was a freshly dug grave just waiting for the next recipient — I was told there was another execution planned that night.

And the owl did hoot while I was there, and there was one helluva thunderstorm, and I do so solemnly swear I will never commit a crime in the state of Texas.

Outside the redbrick walls, protesters were already gathering for Texas's first execution in thirteen years. Inhumane, picket signs read. Cruel and unusual. The “Texas thunderbolt” should never have been brought out of retirement. The death penalty was capricious and irresponsible.

An equal-sized crowd begged to differ. Cruel and unusual was still too good for Russell Lee Holmes. Send him to the chair. Let him fry. Execution candidate number 362 was worth bringing back the electric chair — in fact, they should bring back hanging.

Inside the Death House, where he'd been brought just the night before, Russell Lee Holmes settled his sparse frame more comfortably on the lone bunk in his cell and ignored them all. He had watery blue eyes, a thin face, and a hunched, lean frame. After thirty years of chewing tobacco and drinking soda, his teeth were crooked, stained, and half-rotted. He liked to pick them with his thumbnail. He definitely wasn't a pleasant man or a brilliant man. What he was was quiet and, for the most part, indifferent. Sometimes it was difficult to remember just what his small, finely boned hands had done.

Maybe that's because when the sentencing judge had asked him what he had to say about kidnapping, torturing, and murdering six small children, Russell Lee had said, “Well, sir, basically, I can't wait to get me another.”

The warden arrived at Russell Lee's cell. He was a fat, barrel-chested man, nicknamed Warden Cluck due to jowls that reddened and shook like a rooster's when he was angry or upset. Russell Lee knew from experience that it didn't take much to get Cluck upset. Now, however, the warden seemed kind, even benevolent, as he unrolled the warrant and cleared his throat so the other four men in the Death House could hear.

“They're gonna fry my ass,” he said casually.

“Now, Russell Lee, we're all here to help you today. To get you through this with less fuss.”

Warden Cluck shook his head and got to reading. “It is the mandate of this court, that you, Russell Lee Holmes, shall be executed for the following crimes.”

He ran down the list. Six counts of murder in the first degree. Kidnapping. Rape. Molestation. All-round sadistic bad ass deserving to die. Russell Lee nodded to each charge. Not a bad list for the kid his mama had simply called Trash, as in “filthy white trash,” as in, “no betta than yer father, that piece of no good, filthy white trash.”

“You understand the sentence, Russell Lee?”

“Fine, then. The Father's here to meet with you.”

“I only want to speak with you, my son,” Father Sanders said soothingly. “To be with you in this time of crisis. To allow you to unburden your soul and understand this journey you are about to take.”

Russell Lee, always cordial, said, “Fuck you. I don't want to meet no pussy God. I'm looking forward to meetin' Mr. Satan. I figure I can teach him a thing or two about how to make babies scream. Don't you got a kid, Warden? A little girl…”

The warden's pudgy face had suddenly turned beet red. He stabbed a thick finger in the air while his jowls started shaking. “Don't start. We're trying to help you—”

“Help fry my ass. I'm no fool. You want me dead so you can sleep at night. But I think I'm gonna like being dead. Then I can go anywhere I want, be like Casper. Maybe tonight I'll find your little girl—”

“We ain't gonna bury your body,” the warden yelled. “We're gonna put it through the chip machine, you son of a bitch. We're gonna dice you into dust, then dump the dust into acid. Won't be no trace of your sorry ass left on the face of this earth by the time we're done with you. No fucking molecule!”

“Can't help myself,” Russell Lee drawled. “I was born to be bad.”

Warden Cluck hiked up his gray pants, jerked his head at the priest to join him, and stomped out of the cell.

His grin faltered when in the corridor, the four dead men took up the chant.

THREE-THIRTY P.M. Russell Lee got up, his last meal of fried chicken, fried okra, fried sweet potatoes finally arriving. With it came an uninvited guest, reporter Larry Digger — the warden's way of punishing him for his morning display.

For a moment the two men just stared at each other. Larry Digger was thirty years old, his body trim, his face unlined, his dark hair thick. He carried the wind of the outside world with him like a special scent, and all the men stared at him with sullen, resentful eyes. He breezed into Russell Lee's cell and plopped down on the cot.

“You gonna eat all that? You'll burst your intestines before you ever get to the chair.”

Russell Lee scowled. Larry Digger had been latched on to him like a leech for seven years now, first following his crimes, then his arrest, his trial, and now his death. In the beginning Russell Lee hadn't minded so much. These days, however, the reporter's questions made him nervous, maybe a little scared, and Russell Lee
hated
being scared. He fastened his gaze upon the meal cart and inhaled the oily scent of burnt food.

“Whaddya want?” Russell Lee demanded, digging into the pile of fried chicken with his hands.

Digger tipped back his fedora and adjusted his trench coat. “You seem calm enough. No hysterics, no pledges of innocence.”

“I was told you'd sworn off the priest. I didn't think you'd take the Jesus route.”

“No purging of sins for Russell Lee Holmes?”

“Come on, Russell Lee.” Digger leaned forward and planted his elbows on his knees. “You know what I want to hear. It's your last day now. You know there won't be a pardon. This is it. Final chance to set the record straight. From your lips to the front page.”

Russell Lee finished the chicken, smacked his greasy lips, and moved on to the charcoaled okra.

“You're gonna die alone, Russell Lee. Maybe that seems okay to you now, but the minute they strap you into Old Sparky, it won't be the same. Give me their names. I can have your wife flown in here for you. And your baby. Give you some support, give you
family
for your last day here on earth.”

Russell Lee finished the okra and plunged three fingers into the middle of the chocolate cake. He collapsed a whole side, excavated it like a tunnel digger, and started sucking the frosting from his palm.

“I'll even pay for it,” Digger said, a last-ditch effort from a man who was paid jack shit, and they both knew it. “Come on. We know you're married. I've seen the tattoo and I've heard the rumors. Tell me who she is. Tell me about your kid.”

“Why does it matter to you?”

“I'm just trying to help you—”

“You gonna bring 'em here and call 'em freaks, that's what you're gonna do.”

“So they exist, you admit it—”

“Maybe they do. Maybe they don't.” Russell Lee flashed a mouthful of chocolate-coated teeth. “I ain't telling.”

“You're a stubborn fool, Russell Lee. They are going to fry you, and your wife will never have benefits and your kid will get raised by some other junkyard dog who'll claim it as his own. Probably become a loser just like you.”

“Oh, it's all taken care of, Digger. It is, it is. Matter of fact, I got me more of a future than you do. That's what they call irony, ain't it. Irony. Good word, goddammit. Good word.” Russell Lee turned back to his cake and shut up.

Larry Digger finally left in a rage. Russell Lee tossed his leftover food, including most of the cake, onto the concrete floor. He was supposed to share his dessert with his fellow death row inmates; that was protocol. Russell Lee ground the cake into the cement floor with the heel of his right foot.

Abruptly a loud
crunch
rang down the corridor, the noise growing, swelling, into a fierce, angry crescendo. It paused, dipped low, then soared high, going from a whine to a snarl.