Read The Other Life Online 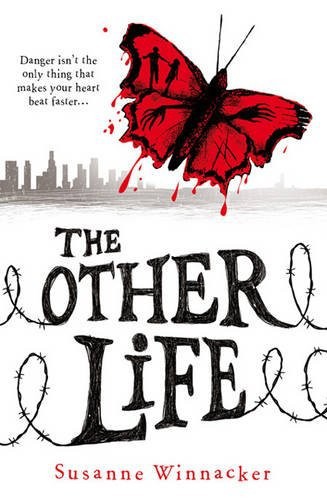 “Insanely good…
The Other Life
is a spine-chilling, gory, entrancing dystopian novel that I didn’t want to end.”

“All the best parts of your favourite post-apocalyptic books plus a healthy sprinkling of Katniss Everdeen, rolled into one action-packed zombie-fest.”

“Sucked me in right from the beginning!
The Other Life
offers a bleak and dangerous new life for a likeable cast of characters.”

“Very few authors can mix a deserted town and a deadly virus, and make you want to stay. Susanne Winnacker has done this perfectly.”

The right of Susanne Winnacker to be identified as the author of this work has been asserted by her in accordance with the Copyright, Designs and Patents Act, 1988.

The name Usborne and the devices

All rights reserved. This ebook is copyright material and must not be copied, reproduced, transferred, distributed, leased, licensed or used in any way except as allowed under
the terms and conditions under which it was purchased or loaned or as strictly permitted by applicable copyright law. Any unauthorised distribution or use of this text may be a direct infringement
of the author’s and publisher’s rights and those responsible may be liable in law accordingly.

This is a work of fiction. The characters, incidents, and dialogues are products of the author’s imagination and are not to be construed as real. Any resemblance to
actual events or persons, living or dead, is entirely coincidental.

The Other Life I

The Other Life II

The Other Life III

The Other Life IV

The Other Life V

The Other Life VI

The Other Life VII

The Other Life VIII

The Other Life IX

The Other Life X

The Other Life XI

The Other Life XII

The Other Life XIII

The Other Life XIV

The Other Life XV

The Other Life XVI

Laughter bubbled out of her.

It shrilled louder the higher she got. I pushed the swing harder, sending Mia soaring into the sky.

Tomorrow, my hands would be sore from all the pushing.

Laughter and the pale blue sky above us.

“We’ve run out of food,” Dad said as he stepped into the doorway of the pantry. He avoided looking at us, especially Mom, ashamed to admit what we’d known for a while.
We’d pretended it wasn’t happening, but we weren’t blind.

Please, not another fight.

Mom looked up from the floor of our improvised kitchen, stopped mopping and set the mop aside. I watched a little puddle of water gathering around it. Her unwashed, blonde hair hung limply down
her shoulders and back, and the look of exhaustion on her face made my stomach clench. “What are you talking about? We should have food for at least another eight months.”

It was impressive how easily the lies slipped from her lips – as if she hadn’t noticed. She wiped her hands on her flowery apron – exactly eighty-nine flowers, I’d
counted them. She stepped into the pantry. Here it came.

1,139 days since I’d heard the chatter of my friends, since I’d seen the sky.

Hands on hips, Mom glared at Dad, her brows creating a solid line of rising anger. “We stocked food for four years. You said so yourself.”

Dad sighed. He slumped against one of the shelves and ran a hand through his hair. “We must have miscalculated. Maybe we ate more than we should have.”

It always began like that: accusations and denial, followed by screaming and then crying. After that came hours of ignoring each other, and punishing silence. Today was the 996th day
they’d spent arguing.

996 out of 1,139. Not a bad rate. Or not good, depending on how you want to look at it. Only four more days and they’d reach 1,000. Maybe some kind of celebration was due. Sometimes I
wondered if they even realized how often they shouted at each other. Maybe they didn’t care. Or maybe it was their way of killing time.

“You calculated the rations! You alone!” Mom pointed an accusing finger at Dad. It shook slightly and a droplet of sweat ran down her temple, shining in the artificial light. The
generator for the air conditioning system was running out of energy. It was getting hot. I pedalled a bit faster and the air became cooler.

“You said the food would last for four years. You said so,” Mom said, her face strained. “Four years!” Her shrill tone made me cringe. Only a matter of seconds before she
would burst into tears.

Dad threw up his hands, a look of utter frustration on his face. “Well, obviously it hasn’t. The children have grown. They needed more food than we could have foreseen!” His
voice rose. It filled the small space and bounced off the sterile white walls.

1,640,160 minutes since I’d run, since the wind had tousled my hair, since I’d seen any other person apart from my family.

“Your father died six months ago. His ration should have provided enough food to make up for that!” Mom shouted.

Grandma winced, but she didn’t stop knitting. She seldom did. Her hands moved even faster, the knitting needles clicking together while she did one stitch after the other.

If we’d taken as much food with us as Grandma had taken yarn, this argument wouldn’t have happened. There was enough yarn for a decade in the pantry. My eyes flitted to our
top-opening freezer – Grandpa’s last resting place. Until three months ago, we’d stored our frozen food next to him. I shuddered and pedalled faster, ignoring the burning in my
legs. Sweat trickled down my calves.

98,409,602 seconds since the heavy, steel door had fallen shut and sealed us off from the world. Imprisoned us.

“This is our last can of food!” Mom held up a small silver tin of corned beef. “How long do you think it will feed six people? How long? Why didn’t you say anything
before? You should have warned us!”

Next came the crying. No doubt.

Mom must have noticed our lack of food weeks ago. Even Mia had asked why the shelves were empty. Mom was only looking for a reason to fight with Dad – it’d been like that for
months.

“It’s not my fault!” Dad bellowed. “Why didn’t you take a look in the pantry? If you stopped scrubbing the counters and floors every bloody minute of the day, you
would have realized it on your own!”

He stormed out of the pantry, but there was nowhere he could go. He stopped in front of the furthest wall – barely ten metres away. His shoulders shook and his right hand rose to hide his
eyes. I’d have bet on Mom, she usually cried first. And she was a loud crier. She didn’t even try to hide it from us.

Before life in the bunker, I’d never seen Dad cry. Now it was a common occurrence – generally about twice a week, but Mom was still in the lead when it came to hysterical breakdowns.
Perhaps a few more weeks and it would be a tie. If we were still alive.

Mom stood in the doorway of the pantry, the tin of corned beef in her outstretched palms like a sacred artefact. Her lips were pressed together and tears rolled down her pale cheeks. Her skin
looked like ash – no fresh air and nothing but artificial light did that to you.

The television flickered because I’d stopped pedalling, and a moment later the screen went black. Bobby turned around and scowled at me. He took out an earplug and opened his mouth. I
shook my head and gave him a warning look. His eyes flitted over to Dad, then Mom, and his brows pulled down in a frown.