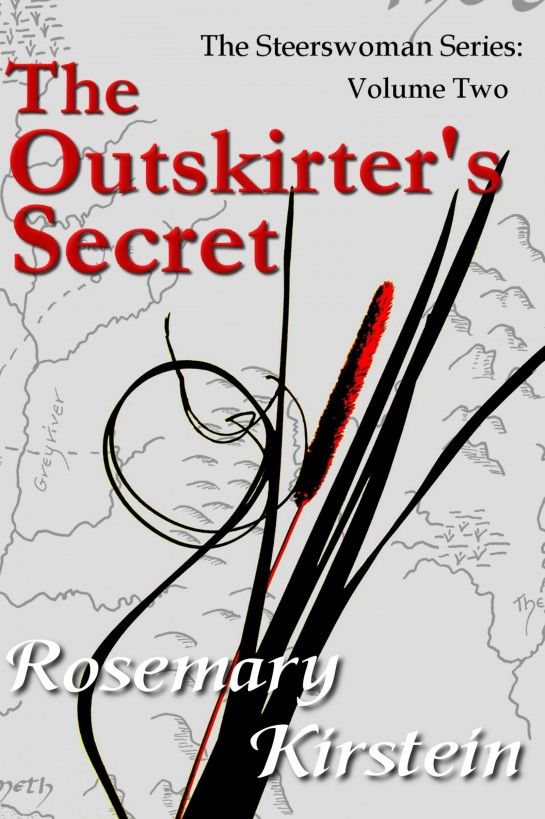 No part of this book may be reproduced, distributed,
or transmitted in any form or by any means, including photocopying,
recording, or other electronic or mechanical methods, without the
prior written permission of the publisher, except in the case of
brief quotations within critical reviews and certain other
noncommercial uses permitted by copyright law.

This is a work of fiction. Any resemblance to real
persons, living or dead, or to real events, is entirely
coincidental.

who traveled far, to a very strange
land indeed,

and to BRIAN BAMBROUGH

The author wishes to thank the following people,
whose assistance helped make this book possible:

Ingeborg and Willi Kirstein, for food, lodging, and
financial assistance; Brian Bambrough, for emotional support,
gainful employment, and advances upon wages; Shelly Shapiro, for
artistic perceptiveness, professional dedication, and personal
encouragement; Lisa Bassi, for providing intelligent critiques and
poetic inspiration; all my other friends, for their encouragement,
comradeship, and patience; and

Sabine Kirstein, for everything mentioned above, and
much more. 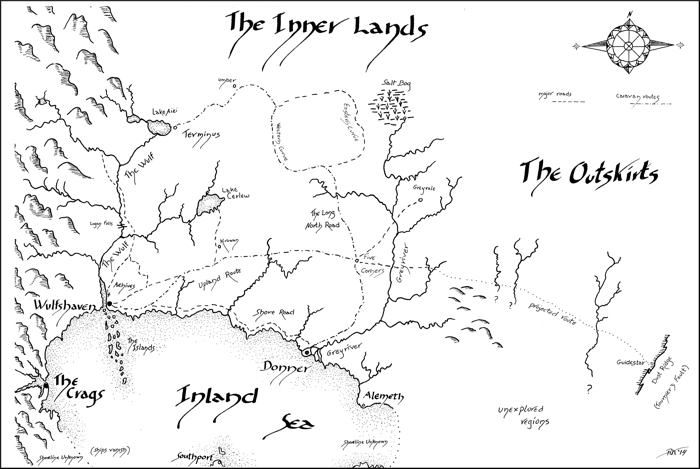 For a high-resolution version of this map online:

H
is hand
shook, and the mark he made with the bit of charcoal wavered as he
drew it: a small, lopsided cross, one arm trailing off unevenly.
The frail, dark-haired boy looked up at the faces around him. "More
than twenty," he said. His voice cracked.

At the center of the table, one stolid gray
man studied the chart with tightened eyes, then shook his head and
spoke quietly. "Twenty-four, that'll be. Two war bands." A silence
filled the room as the implications of the information were grimly
considered.

The little farmhouse kitchen was crowded,
with some thirty people, men and women, standing and sitting around
the battered wooden table. It was only the stillness of the
occupants that rendered the room bearable. There was no jostling:
Each person present was deeply engaged in thought.

The chart was crude, drawn hurriedly and with
much amendment directly on the surface of the broad table. Its
scale was large, its compass very small indeed, but to the people
in the room it contained everything in the wide world most
important.

.A small idea floated to the surface of one
slow mind. "Now, Dalen," a voice spoke up, "you've got some
Outskirter blood in you."

The crowd murmured approval, and the man
addressed replied calmly, "Some and more."

"Well, then, how will these ones think?"

The steerswoman said, "Blood won't tell you
how people think." As one, all turned their attention to the person
seated at the end of the table.

She was a mild-looking, unremarkable woman of
some twenty-four years, with sun-streaked hair and sun-browned
skin. She carried no air of command, and had neither the physique
nor the manner of a seasoned warrior. But at that moment, every
person in the room waited for her to speak, waited to risk his or
her individual fate and the fate of their village on whatever she
might be able to tell them. She was a steerswoman. A steerswoman
might not know everything, but everything that a steerswoman did
know was true.

This one, Rowan by name, had come to know a
bit about the Outskirters.

She leaned forward and studied the chart, one
hand ruffling her hair musingly, repetitively, as she thought; a
man seated beside her watched the action with a degree of
disapproving puzzlement, as if it were not quite proper for a
steerswoman to possess such a thing as an idiosyncrasy of behavior.
She ignored him, and sat considering the lay of the land as
depicted, testing distance, timing, movement in her thoughts. "With
only two war bands," she began abstractedly, "chances are they're
both from the same tribe. That's a disadvantage for you, because
they're accustomed to working together. If you manage to kill one
leader, his or her replacement will be well known to the other
band, and their cooperation won't falter." She laid one finger
thoughtfully on the cross the boy had made, marking the war bands'
position. "They probably won't expect resistance, certainly not
organized resistance. It's good that you're forewarned." She spared
a glance for the nervous boy, whose wit and speed might prove to
have saved his town. He blinked at the steerswoman's approval, and
a hint of pride crept past the fear to his wide eyes.

She spoke to him, indicating the area between
the town and the Outskirters' position. "What sort of land is this?
Hilly?"

"Some," the boy said. "Hilly this side the
brook, flatter t'other."

She gestured for the charcoal. He
relinquished it, and she notated his descriptions. "Forested?"

"How old a forest? Is there much
undergrowth?"

Other voices began to supplement the boy's,
at first hesitantly, then more quickly, words overlapping as the
steerswoman amended the crude chart: Yes, they told her,
undergrowth here, thinning out there, a particularly tall bare hill
to the east . . . Rowan expertly placed her mind's eye atop that
hill, looking back at the town, transferring facts from map to
imagination, inferring what useful knowledge an Outskirter scout
might gain from such a vantage point.

The map grew in detail, and within the
overdrawn lines—lines rubbed and shifted, lines that altered the
significance of other lines—focus and precision began to emerge.
The options for quick and secret movement of twenty-four warriors
began to narrow. Soon there were only two possibilities.

"If they attack at dawn," Rowan said, and in
her mind she saw them doing so, as clearly as if she witnessed it,
"they'll have to move into position in darkness. In that case, they
must follow the brook." By starlight, in forest and brush, no
strangers could be sure of their path; but the brook led directly
into the town itself, a clear unguarded road through the
forest.

A young farmer hazarded disagreement. "But
look, land's flat behind these hills, easy way to town from there."
He pointed.

"That's the other possible route. But if they
do come around the back of the hills, they can't attack at dawn.
They'd have to be moving into position now, at night, and it's too
dark for them to find their path."

She shook her head. "Outskirters won't travel
by torchlight."

An elderly, bent-backed woman seated across
from Rowan squinted in thought, her tiny eyes nearly level with the
tabletop. "Split," she grunted.

The old woman reached out to indicate the
brook, the hills. "Split. Come at us f'm two sides." And she nodded
with dour satisfaction.

Rowan took her meaning. "They might do that.
Or they might all come down the brook. Or all around the hills."
But which possibility would the barbarian raiders prefer, which
would be most appealing, what habits of tactic might guide an
Outskirter's choice?

Rowan looked to the side of the room, where
her friend and traveling companion stood alone, apart from the
townspeople—looked once and just as quickly looked away.

Bel was leaning back against the end of the
stone hearth, a bowl of stew in one hand and a biscuit in the
other, watching the deliberations with cheerful interest.
Dark-haired, dark-eyed, she was small in height, solid in
structure, and stood, even in her present lounging pose, with the
easy, dynamic balance of a fighter. Anonymously dressed in sandals,
felt trousers, and a linen blouse, she might have passed notice but
for an eye-catching belt she wore, of flat blue gems set in linked
disks of silver, stunning in its rough beauty.

Unseen in her bulky pack were a pair of
shaggy goatskin boots and a patchwork fur cloak. No outward clue
identified her as an Outskirter.

Rowan did not ask for Bel's advice.

As a steerswoman, Rowan could ask a question
of any person, and that person must answer truthfully. It was the
other side of tradition's contract: anyone might request
information from a steerswoman, and it would be provided,
truthfully, to the best of the steerswoman's knowledge. The only
enforcement against one side's breaking of the contract was the
canceling of the other: lie or refuse information to a steerswoman,
and never again would any steerswoman answer even your most casual
question.

Rowan could ask Bel what the attackers might
do. And Bel might answer truthfully, to the detriment of her fellow
Outskirters, her own kin; or she might refuse to answer at all. On
her refusal, Bel would be placed under the steerswoman's ban—and
worse, in this case: her friendship with Rowan would be severed
forever.