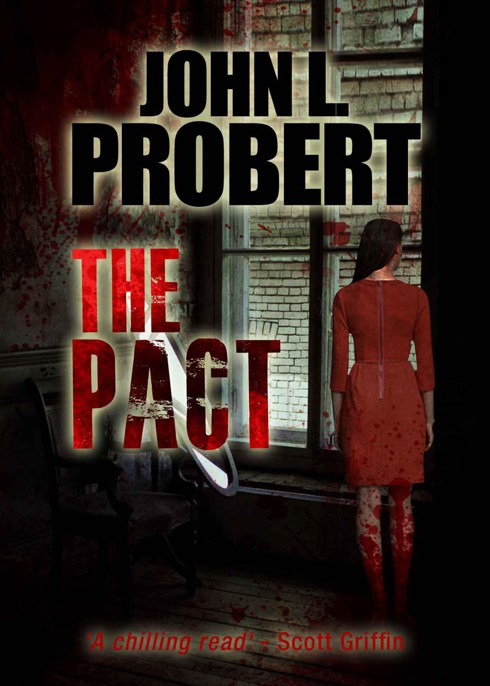 John Llewellyn Probert has asserted his rights under the Copyright, Design and Patents Act, 1988, to be identified as the author of this work.

Raucous
laughter accompanied this proclamation, reverberating off the polished red brick of the elegant buildings that surrounded the darkened school quad. The teenaged girl who had uttered the words clutched the arm of her taller, blonder female companion, who was looking anything but amused.

“Oh,
come on, Jen.” The girl tried again to make the other smile. “He was a complete and utter bastard. Taking his entire wardrobe to Oxfam while he was out was brilliant! You are brilliant!”

Jen’s
face creased into a smile as they made their way along the tarmac path that cut a diagonal line through the square of meticulously maintained grass. “God, Kerry,” she said, “are you sure it wasn’t too much? Do you think he might be really angry?”

Kerry
tugged on Jen’s arm and brought them both to a halt. “Look,” she said, “how long had you been going out with him?”

Jen
looked up at the sky. It was a clear night but the moon wasn’t up yet. For now the world consisted of just her and Kerry and the twinkling stars above. She gave a deep sigh and her breath steamed in the chill night air.

Kerry
nodded. “Right - three months. And he’d already admitted seeing someone else behind your back. He might have been seeing her before you two met. In fact he might never have stopped seeing her. For all you know you were the one who was his bit on the side.”

Jen
shrugged. “I don’t know,” she said, biting her lower lip. “He said the woman who kept phoning him was his sister.”

“His
sister?” Kerry scowled. “His bloody sister? Listen, you didn’t hear him talking to her when he thought he was alone. You were in your room doing that essay you’d forgotten about. The one on bloody E M Foster.”

“I
was the one coming out of the toilet in the night club. I was the one who heard him - all those words about ‘secret’ and ‘honour’ and ‘commitment’, and you said yourself it wasn’t you he was ringing.”

Jen
nodded. That part at least was true, and there was no point trying to deny it.

“And
what happened when I told you? When you confronted him?”

Jen
shrugged. “He said he didn’t know what I was talking about. He said I was the only girl for him and besides, what had I been doing getting my friends to spy on him after I’d told him I trusted him?” She placed a palm on her cheek. “That was when he got angry.”

“And
he had no bloody right to be.” Kerry shivered. “Christ it’s cold.”

The
two girls resumed their walk. Ahead of them loomed the darkened recesses of the southwest cloister.

“We
could go and get one if you like.” Kerry looked over her shoulder. “It’s not that far to go back.”

“The
other two won’t mind,” said Kerry. “And they both know you’ve been going through a bit of a rough patch.”

Jen
stopped again. They were so close to the cloister now that she could barely see the other girl’s face. “You told them?”

Kerry
shrugged. “All sisters forever, aren’t we?” she said. “And besides, they would have found out sooner or later. A stunt like that doesn’t exactly stay quiet for long, you know. Wouldn’t you rather have all three of us to talk to, rather than just me?”

Jen
nodded; even though for all she knew she was more invisible than Kerry in the encroaching blackness. She reached for the girl’s hand. “I can hardly see anything,” she said. “Can you help me?”

“Oh
you silly,” Kerry giggled and took the lead, pulling Jen along behind her. “Just five paces down here and under the archway and we’ll be nearly there.”

The
archway was a narrow passageway that ran beneath the chemistry laboratories and allowed access to the buildings south of the main school. The two girls fumbled their way along the brick-lined alley until, after what seemed to Jen like an age, they found themselves outside once more.

“I
hate that passage,” Jen said once they were through and she’d taken a couple of deep breaths. “It’s like something out of a bloody horror film.”

Kerry
giggled. “You mean you think there might be someone lurking in there waiting to get you?”

“Or
you.” Jen didn’t think it was funny. “Why should it just be me they’d be after?”

“Because,
my dear,” said Kerry skipping ahead, “I didn’t give all my boyfriend’s belongings to charity last week, did I?”

“Ex-boyfriend,”
Jen said decisively. “Hey - wait for me!” She scurried to keep up. The buildings in this part of the school were more spaced out. The common across which they were now walking was dotted with skeletal apple trees, their outlines rendered all the more fairytale sinister by the floodlights that had been positioned at regular intervals across the ground. Jen tried not to think about how the backlit branches resembled clawing hands, reaching out to pluck her from the path and drag her into the darkness.

“What’s
up with you?” Kerry asked once Jen had caught up with her friend.

Jen
couldn’t resist a nervous glance over her shoulder. “Nothing,” she said, before adding, “probably.”

“What
do you mean?” Kerry had quickened her pace, and even though she was trying to sound self-assured, the little quaver in her voice betrayed the fact she was nervous as well.

“I
just thought I heard footsteps.”

“Oh
bloody marvellous.” Kerry was starting to pant a little now. Ahead of them loomed the oblong shape of one of the residence blocks. “Nearly there,” she added.

There
was a single light burning on the third floor.

“Christ,”
said Jen as they reached their destination. “Has everyone else buggered off for the weekend?”

“Looks
like it,” said Kerry as she thumbed the button for Room 312.

They
stood in the darkened doorway of the block, waiting for a reply.

“I
wish you hadn’t said you saw someone,” she added eventually.

“I
didn’t.” Jen pulled her coat around her even more tightly. “I just thought I heard footsteps, that’s all.”

“It’s
hardly as if it’s some bloody serial rapist, is it?” Kerry jumped up and down in an effort to keep warm and pushed the button again.

“Don’t
be daft,” said Jen. “There haven’t been any rapes on campus, so how could it be a serial rapist?”

Kerry
rolled her eyes. “Well they’ve got to start, haven’t they? Besides, he could have started somewhere else and now he’s moved here to find fresh victims. Oh for Christ’s sake come on!” Kerry pressed the button again.

Jen
looked back the way they had come. She was sure it was just her imagination, but now it looked as if there really was a shape there, about ten yards away from them.

Her
friend snorted. “I just did about ten times,” she replied. “She’s probably on the toilet or something.”

Jen
looked back down the path, blinking to try and shut out the glare from the floodlights.

The
shape was moving closer.

“Press
it again anyway,” she said.

“Tor’s
going to be pissed off if I do,” said Kerry. “You know how upset she gets if you rush her over anything.”

Jen
reached over and pressed the buzzer. Then she turned and blinked back into the darkness.

The
dark figure was nearly upon them.

“Hey,”
said Kerry, squinting into the black, at the someone who might have been lurking there, “you know, I think you might be-”

There
was a grinding buzz as the door release to the block was triggered. The two girls tumbled inside. Jen shoved at the door and it closed with a metallic click. She pressed her face to the glass and tried to peer outside, but in the glare from the fluorescent strip set into the ceiling of the white-walled entry hall, it was impossible.

“Probably
nothing,” said Kerry as she pressed the button to call the lift.

“Or
that serial rapist of yours,” said Jen with a shiver and a giggle.

“You
think so?” Kerry turned to the door and gave a gesture designed to incense anyone who might think it was being delivered in their general direction. “Go and find someone else to terrorise you, bloody pervert!” she said, loud enough that it could have been heard through the glass. “We’re staying in here tonight!”

“What
the fuck did you tell him that for?” Jen’s eyes were filled with fear once more as a bell rang and the lift doors opened. “Have you never seen any of those films where girls get trapped in a building and terrorised?”

The
two of them squeezed into the lift and Kerry thumbed the button for the third floor.

“But
we’re not trapped, are we?” she said as the doors slid shut. “We can leave any time we like.”

“Not
if we think there’s a killer lurking outside,” said Jen, looking more miserable by the minute.

“He’s
probably both,” Jen replied. “The only thing we can hope for is that he wants to kill us first and then rape us, instead of the other way around.”

The
lift reached the third floor and the doors slid open.

“Well
at least I’m with an optimist,” said Kerry, stepping out into exactly the kind of badly lit corridor a killer might be lurking in. She hesitated just long enough for Jen to bump into her from behind, causing her to squeal in horror.

“It’s
your bloody fault,” Kerry replied. “You’ve gone and got me worked up, now.” She waved her arms around.

“What
are you doing now?” Jen asked.

“It’s
the motion-sensitive lights,” Kerry explained. “Sometimes they’re not all that sensitive.”

“Or
they’ve been broken by the killer who’s lurking up ahead,” said Jen. She was about to step back into the lift when the corridor lit up with the same kind of harsh glare that had greeted them downstairs.

“Or
maybe it’s just that the lights are crap,” said Kerry with a smile of triumph. “Come on, we’re late.”

Victoria
- Tor to her friends - had the room at the far end of the corridor. Despite the now fully functioning illumination, the two girls hurried down it, their anxiety purging itself in giggles as they reached the door of room 312.

“Let
us in!” Kerry hammered on the door.

“But
we don’t know which way round he’s going to do it!” Kerry added. “So let us in before-”

The
door opened and the two girls tumbled into the room, giggling and squealing.

A
tall girl wearing unflattering black plastic rimmed spectacles, her long brown hair bound in a plait that snaked down her back, glared at them.

“Close
the door!” said Jen in a fit of giggles. “Close the door or he might get us!”

“Who
might get you?” Tor rolled her eyes as Kerry backed against the door.

“The
murderer!” Kerry said. “The one who’s going to make sure we’re trapped in here before he picks us off one by one.”

“Yes,”
said Jen, breathless with relief now that there were somewhere safe and warm. “The one who followed us here through the orchard.”

Tor
raised an eyebrow. “We have been having fun on the way here, haven’t we ladies?” she said. “Rachel and I have been wondering where you’ve been.”

The
slightly plump, but very pretty, blonde girl sitting on the sofa put down the copy of
Twilight
that she had been reading and looked up.