Read The Pages of the Mind Online

The Pages of the Mind 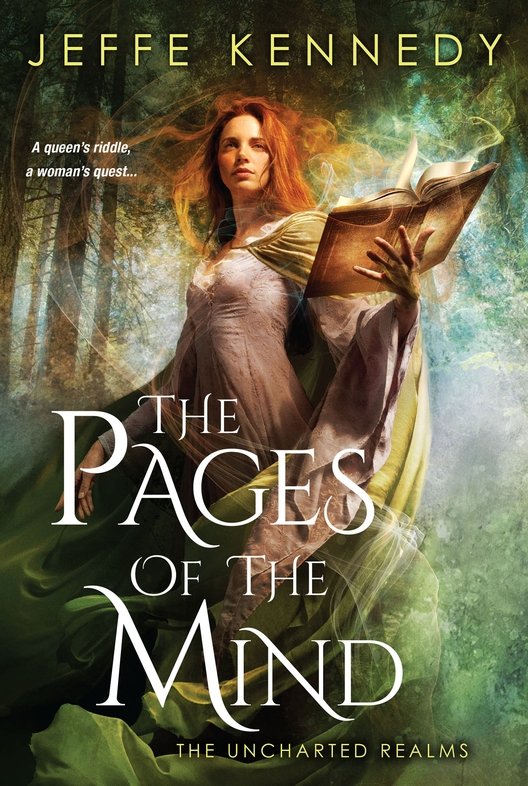 Praise for Jeffe Kennedy's Twelve Kingdoms
The Mark of the Tala
“The fairy-tale setup only hints at the depth of world-building at work in this debut series. What could be clichÃ©d is instead moving as Andi is torn between duty to her father and the pull of Rayfe and his kingdom . . . This well-written and swooningly romantic fantasy will appeal to fans of Juliet Marillier's Sevenwaters series or Robin McKinley's
The Hero and the Crown
.”
â
Library Journal
, starred
Â
“
A tale that is both satisfying and tantalizing. This promises to be a trilogy that will leave readers enthralled.”
â
Heroes and Heartbreakers
Â
“I thoroughly enjoyed the world that Jeffe Kennedy created here. It was the type of sweeping story that was easy to get lost in, thanks to the interesting characters, the bit of mystery surrounding Andi's mother, Salena, and their otherworldly heritage.”
â
Harlequin Junkie
Â
“This magnificent fairy tale will captivate you from beginning to end with a richly detailed fantasy world full of shapeshifters, magic, and an exciting romance!”
â
RT Book Reviews
, 4Â½ stars, Top Pick
Â
“I loved every page and the conclusion simply left me stunned.”
â
Tynga's Reviews
Â
The Tears of the Rose
“Kennedy creates a well-constructed world, and Amelia has a solid character arc, moving from unlikable to heroic in her own way.”
â
Library Journal
Â
“New readers will have no trouble following along.... Amelia's journey from pampered princess to empowered woman begins with sorrow and pain, until she begins to see her purpose and embraces her newfound strength and power. She is a surprising female character, as is the scarred and mysterious Ash. One of the highlights of the Twelve Kingdoms series so far is that the women are charged with saving themselves and creating their own happily-ever-after, with the men surrounding them just one part of the process.”
â
RT Book Reviews
, 4Â½ stars, Top Pick Gold
Â
“
The Tears of the Rose
strikes gold . . .”
â
Fresh Fiction
Â
“Certainly, Jeffe Kennedy's characters are not perfect. No, they are flawed, even Andi in the first book, but their flaws are believable and make them relatable. So, even if you don't like them (like I didn't like Amelia at first), you can definitely understand where they're coming from.”
â
The Romance Reviews
Â
The Talon of the Hawk
“The saga of The Twelve Kingdoms returns in grand style! This is a complex world full of danger, subterfuge and secrets with empowering female characters who are not afraid to fight for their future.”
â
RT Book Reviews
, 4Â½ Stars, Top Pick
Â
“Excellent character development and strong action continue to characterize the Twelve Kingdoms, and I'm thrilled beyond belief to know that we will see more of this world in future Kennedy books.”
â
Fresh Fiction
Â
“Riveting.”
â
The Romance Reviews
Â
“This series has left me with a serious book hangover. Do not read this as a standalone novelâbuy all three and enjoy the marvelous world that Jeffe Kennedy has created for us all. . . .”
â
Urban Girl Reader
Â
“This is powerful stuff. Epic fantasy!!! I absolutely adored this book!”
â
Tea and Book
Â
“
The Talon of the Hawk
is everything a lover of high fantasy and romance can expect: action, adventure, closure, and sweet romance.”
â
Romance Junkies
Â
“The third installment of Jeffe Kennedy's Twelve Kingdoms fantasy series tears sharply and deeply into the books' mythology as well as into the heart of its core family.
The Talon of the Hawk
, Ursula's story, doesn't hesitate to draw blood and, in the process, proves also to be incredibly healing.”
â
Heroes and Heartbreakers
Â
“Ursula is such a great character. She doesn't take people's crap and she tells it like it is. No matter if anyone likes it or not.”
â
Night Owl Reviews
Books by Jeffe Kennedy
The Master of the Opera
*also available as an eBook serial*
Act 1: Passionate Overture
Act 2: Ghost Aria
Act 3: Phantom Serenade
Act 4: Dark Interlude
Act 5: A Haunting Duet
Act 6: Crescendo
Â
Â
The Twelve Kingdoms:
Â
The Mark of the Tala
Â
The Tears of the Rose
Â
The Talon of the Hawk
Â
Â
The Uncharted Realms:
Â
The Pages of the Mind
Â
The Edge of the Blade
(coming January 2017)
Published by Kensington Publishing Corp.
THE
P
AGES OF THE
M
IND
JEFFE KENNEDY