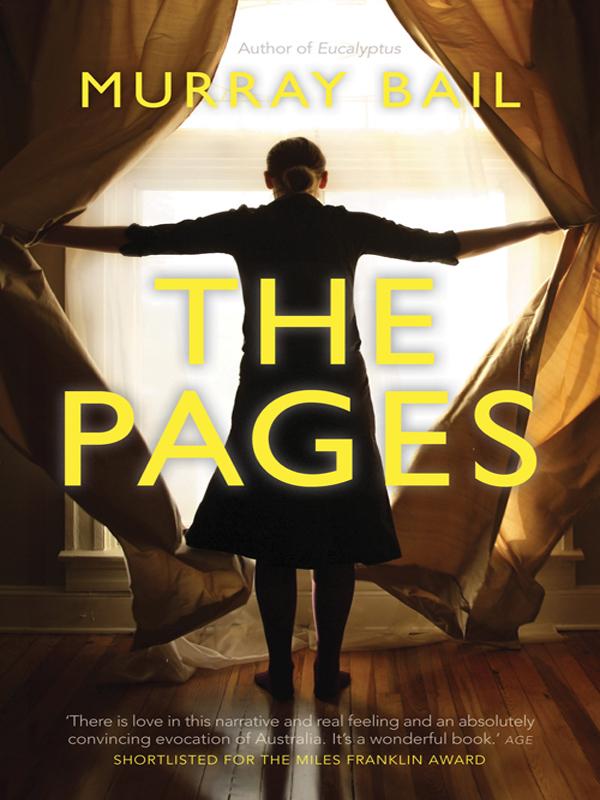 PRAISE FOR MURRAY BAIL
AND
THE PAGES

Shortlisted for the Miles Franklin Award 2009

âBail's novel crackles with ideas. It is witty and touching, and also graceful and stylized.'
Sydney Morning Herald

âA captivating novelâ¦A romance that is as enchanting as it is unexpected. This is a book you can read over and over, gleaning each time new revelations, new and deeper insights.'
Canberra Times

âBail demonstrates his ability to write with a luminous, elemental aura surrounding everything.'
Australian

âThis is a book handling modern cultures, a lively romance, and also, like Bail's previous novels, a jigsaw of reflections on Australia.'
Sunday Age

Other books by Murray Bail

The Drover's Wife and Other Stories

Murray Bail was born in Adelaide in 1941. His first novel,
Homesickness
, won the National Book Council Award for Australian Literature and the
Age
Book of the Year Award.
Holden's Performance
won the Vance Palmer Prize for Fiction. His much-loved novel
Eucalyptus
won the Commonwealth Writers' Prize and the Miles Franklin Award in 1999.

The paper in this book is manufactured only from wood grown in sustainable regrowth forests.

First published 2008 by The Text Publishing Company
This edition 2009

AT DAWN â what a word: the beginning of the world all over again â the two women set out from Sydney in a small car, as other people were slowly going about their tasks, or at least beginning to stir, producing a series of overlapping movements and stoppages, awakenings and false dawns, framed by the glass of the car.

They were city women. Comfortably seated and warm they were hoping to experience the unexpected, an event or a person, preferably person, to enter and alter their lives. There is a certain optimism behind all travel. The passenger, who wore a chunky necklace like pebbles made out of beer bottles, had never been over the mountains before. And she was forty-three. Directions had been given in biro, on a page torn out of an exercise book. It would take all day getting there. Over the mountains, into the interior, in the backblocks of western New South Wales, which in the end is towards the sun.

At an earlier time, perspiring travellers found no other way but to hack a path through the jungle or the dry bush. Very common image. Now on the long wide road called Parramatta, the obstacles consisted of nouns, adjectives and flags, and flashing lights in the shape of arrows, the many different interruptions of colour and promises, honestly, the hard work of selling jutting into the road itself, cluttering and distracting the mind. Traffic kept stopping, starting: you'd think by now they could synchronise the lights.

The woman behind the wheel preserved a high, elbowy method of steering and changing gears, more like a series of nudges and prods, which can only be described as feminine. It was her way in general. It suggested refinement: everything's temporary, take the provisional position, in stages.

Erica Hazelhurst had a calm face, pale lips. In profile she had an elegant nose which became more ordinary as she turned. She lived alone.

A few years younger, her passenger had a slightly large head, which most people missed, because it was obscured by a restless, self-absorbed energy. She was a woman always losing something, leaving it on a table, or on a chair, or in the back of a taxi, as if dropping clues to herself for someone to followâ¦sunglasses, a glove, keys, books, purse, and, once, her virginity. Now she had one foot on the seat and head bent, painting her nails. As she concentrated she was at the same time describing a man they both knew. She turned to her fingernails. With rapid precision she reeled off his recent behaviour, and proceeded to go through his lesser-known qualities, some of them good qualities, which only gave greater credence to his evasive and careless qualities. In rapidity and sureness of touch they could have been paragraphs snipped out of some sort of manual, a manual of Types, various case histories pointing in a clinical style to Inevitable Behaviour, et cetera.

Finished, she ruthlessly inspected her nails. She didn't appear to notice they were bitten down. Now she wanted something else to concentrate on, some other situation â a person â and Erica, waiting for the attention to turn to her, adopted a very smooth expression.

It was often like this. Instead of ease of familiarity they enacted a kind of hectic casualness, more like a demonstration of familiarity, which required no response. And months would pass until one of them called on impulse, no particular reason, or when one was having difficulties of an unspecified kind; then they would pick up, as if they had left each other only the day before.

Erica glanced at her friend's hair â reddish, open to experiment. Her own was short, determined, academic. And she noted too with some admiration the blouse which appeared to be casually chosen, of faded silk, here and there traces of embroidery, and buttons undone, where shadow offered the ample promise of softness.

âI would make a gloomy wife,' she felt like saying, but frowned instead.

She immediately wondered why she had had the thought in the first place â was it a true one? And why would it appear as out of character to people nearby? Concentrating on the driving, she saw it was hardly a thought at all, more one of those non-thoughts, those that come in from every direction, interfering with possible clear-thoughts.

They were on top of the mountains, the road rising and falling and turning this way and that, which had their heads leaning one way, then the other, passing tearooms, railway station, shops selling old kettles and cane furniture, corner hotels and hotels set back, whitegoods, petrol, pink paintwork, pies, newsagent. A woman stepped out and waved to someone, not them. Presbyterian church there converted into a carpet emporium.

Sophie â the passenger â now examined herself in a compact mirror, paying close attention to her teeth.

âSo much for the Blue Mountains. I haven't seen a single instance of blue.'

Below, on the right, a purple sunlit plain appeared as if unfurled on a butcher's calendar. Patches of mist erased the red roof of a homestead and an entire paddock of merino sheep. It had something to do with ground and air temperature. To Erica, anything that suggested incompletion or hazy thoughts made her impatient â the years of training. Had she, by trying all her life to banish woolly thinking, become harsh â was she a hard woman?

The question had been coming upon her in unexpected places, such as the bathroom, stepping out of the shower, at the supermarket, reaching out for the tomatoes, in class recently when she was in the middle of a medieval sentence â without warning, the oddest times. The frequency of it implied a concern deep-seated. This was not about to go away. In the bathroom, naked, just herself, she could only glance at her shape in the mirror. Can a woman be strong and clear without turning hard? Hardness â not something we want to think about in a woman. Erica almost opened her mouth to ask Sophie. Had she â now intent on steering this efficient Japanese car â had she become a cold-hearted, off-putting woman? âDo you think I've developed a hard side?'

Erica Hazelhurst had a lovely, rounded body, patterned from her mother's, pale, with hand-shaped hips, the two vertical halves not quite symmetrical. She wore flat shoes. Erica came from a family that didn't believe in a person drawing attention to themselves. Her mother and father, and her six uncles and thin-as-a-rake aunts, and their neighbours also behind hedges in the short hot street in Adelaide, made a point of keeping thoughts to themselves. To talk was to wave attention to yourself. Better to clam up. As for talking about feelings â this was a really difficult area, without solid foundation, more trouble than it was worth; better to keep the lid on feelings. The prevailing stoicism might have come straight from the sticks, the dry unyielding country. It puts the squeeze on words. The place hadn't been feminised yet. Still, it generated its own set of decencies. There was an underlying honesty in Erica's family â in relation to economics, and towards all other people. And no one would dream of complaining about the plainness of circumstances.

Her father had a shop in one of the granite buildings on King William Street, third floor, between a stamp dealer and a milliner. The first time Erica saw him behind the counter she hardly recognised him, her own father. It made her twist her legs and look away. To protect his cuffs, her father wore a green cardigan she'd never seen before, and elastic bands on his sleeves. These he put on as soon as he arrived at work. Fitted to her father's eye was the protruding magnifying thing. It would stay there all day. With practised movement he levered open the back of a silver Longines, exposing the insides which shivered like an oyster. When it came to payment, Victor Hazelhurst never actually replied to the customer but searched around for a scrap of paper and scribbled a figure and pushed it forward.

Erica was waiting at the bus stop for her father to come home. She held onto his thumb, and began talking. After a few steps he made an unexpected noise, not exactly a word, and slipped out of her grip. People came forward, some kneeling tried pushing his chin and cheeks. The sun was shining. Even the bitumen road was harshly lit. For a long time Erica didn't know what or how to think about anything much. She believed she stopped thinking. Corrugated iron church there looked more like a shearing shed. A brown horse stood against the entrance, out of the wind.

Now more than anything Erica wanted to make sense of her life. It can be a strain trying to understand brief moments, the fleeting registrations, as well as what appeared as long and solid, or at least constant; always returning to herself, how and where (and why) she fitted in. Erica said to herself she was a separate individual, a live being who happened to be a woman. She tried to go on from there. No one else on earth was like her, not even in appearance. It was amazing how her sister born of the same parents barely a year before didn't think or speak or look like her at all â especially now they were in their forties. And over the years this person, herself, Erica Hazelhurst, had encountered endless experiences, each one of them supplying unequal additions and alterations to her original self â it included experience of words â a multi-layering which increased still further her distance from other people, other women. These experiences passed through her, as did time, and in contemplation and possible measure of this she drew near to what has been called âthinking about thinking'. The trouble was: she was excluding everybody else.

Abandon by Elana Johnson
Mine To Lose by Lockhart, Cate
Penny Dreadful by Will Christopher Baer
SEAL Under Siege (Men of Valor) by Johnson, Liz
Simply Complexity by Johnson, Neil
Countdown to Zero Day: Stuxnet and the Launch of the World's First Digital Weapon by Kim Zetter
To Kill An Angel by M. Leighton
Touch of a Scoundrel (Touch of Seduction 3) by Mia Marlowe
My Bad Boy Biker by Sam Crescent
The Assistant by Bernard Malamud