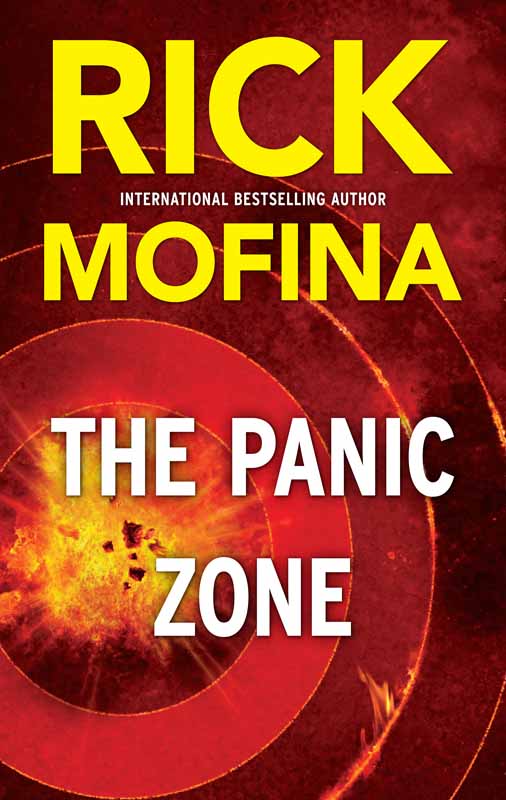 A car crashes in Wyoming: A young mother is thrown clear of the devastating crash. Dazed, she sees a figure pull her son from the flames. Or does she? The police believe it's trauma playing tricks on the mind, until the woman hears a voice on the phone: "Your baby is alive."

A bomb explodes in Rio de Janeiro: The heinous act kills ten people, including two journalists. Jack Gannon's assignment is to find out whether his colleagues were innocent victims or targets who got too close to a huge story.

A Caribbean cruise ends in horror: Doctors are desperate to identify the cause of a passenger's agonizing death. They turn to the world's top scientists, who fear that someone has resurrected their secret research. Research that is now being used as a deadly weapon.

With millions of lives at stake, experts work frantically against time. And as an anguished mother searches for her child and Jack Gannon pursues the truth, an unstoppable force hurls them all into the panic zone.

Praise for the novels of Rick Mofina

“
The Panic Zone
is a headlong rush toward Armageddon. Its brisk pace and tight focus remind me of early Michael Crichton.”

“
Vengeance Road
is a thriller with no speed limit! It's a great read!”

“
Six Seconds
should be Rick Mofina's breakout thriller. It moves like a tornado.”

“One of the leading thriller writers of the day.”

“A lightning-paced thriller with lean, tense writingâ¦Mofina really knows how to make the story fly.”

“
No Way Back
is my kind of novelâa tough, taut thriller.”

This book is for Laura and Michael

And I looked, and behold a pale horse: and his name that sat on him was Death, and Hell followed with him.

E
mma Lane whispered a prayer for her baby son, Tyler, cooing in his car seat behind her.

Over the past few days, he'd been pale and had run a fever.

“Just a little cold. Give it another twenty-four hours,” the doctor had told Emma, who had succumbed to the anxieties of being a new mother until Tyler's illness had passed.

Now, with her worries eased, Emma smiled and reached back to adjust her son's straps as their SUV cut across Wyoming's rolling plains.

“Everything good?” her husband, Joe, asked as he drove.

“For putting up with me.”

“Do I have a choice?” He chuckled.

They gazed at the Rockies before them, a majestic reminder that some things stood forever, while others lasted no longer than a shooting star. And after what they had gone through to have Tyler, Emma took nothing for granted. Life did not come with guarantees. It was as indifferent to you as those mountains out there.

Emma thought it was funny how the things she'd
dreamed of had come to her in ways she never expected. She was thankful for the blessings she could touch, hold and love forever: her son and her husband.

Today, they were headed to a pretty spot north of town, for a picnic beside the Grizzly Tooth River. This would be a break for Joe, who had been putting in twelve-hour days for the past three weeks straight, building houses in Big Cloud's new subdivision.

Lord knows they needed the overtime cash, but fretting over Joe's long hours and Tyler had kept Emma on edge lately.

On Monday, her two-week break ended and she would return to Rocky Ridge Elementary School where she taught children in the first and second grades. They were little sweethearts and Emma loved teaching, but she hated being apart from Tyler.

Joe guided the SUV along the empty highway, a meandering back route few people took. With the exception of a couple of cars that had passed them earlier, the road belonged to them. It was soothing. As the wheels hummed, Emma thought of other matters, like the spate of wrong number calls to their house over the past month. They had come at all hoursâin the afternoon, when Emma was home alone with Tyler, and in the middle of the night. The callers never said anything. They were quick hang-ups and the number was always blocked.

Like someone was checking in on them,
she thought.

But Joe shrugged it off. “Just people who can't dial,” he assured her.

Eventually, Emma stopped worrying about it, too. Until the episode with the mystery car.

One day last week, after she had finished shopping downtown and was leaving her parking spot, she noticed a white sedan that had arrived at the same time she had.

It was a few cars back and it seemed to be following her.

When she pulled in to the mall, it was still a few spots
behind her. After Emma parked and got Tyler into his carriage, she saw it again, parked off in a far corner. It was still there when she returned to her car and left the mall's parking lot. Emma was not certain if the sedan left when she did because she had lost sight of it in the drive-home traffic.

A day later when she took Tyler out for a stroll to the park, Emma saw the same white sedan at the end of their street.

“Do you think maybe you're being a little paranoid?” Joe had said when she told him about it later. “It's the mama grizzly syndrome kicking in.”

When she didn't smile at his teasing, he got up from the kitchen table, left his receipts and job estimates, and put his arms around her.

“Em,” Joe said, “Big Cloud has nine thousand people. We bump into most of them every other day. You're likely seeing someone new.”

She pressed her cheek to his hard chest and nodded.

“Besides,” he added, “you're one of the most fearless people I know. Woe to anyone or anything that comes between you and Tyler. If it was a mama griz, I would fear for the bear.”

Emma smiled at the memory and turned to her husband. He was her rock, her protector, her hero because of what he'd gone through for her.

Tyler did not come to them the usual way.

Joe was a proud man and what he did for her was not easy. But he had put her happiness before his own and, no matter what happened, Emma would always love him for that.

She studied Joe's strong jaw stubbled just the way she liked. She looked at the tiny lines at the corners of his eyes that crinkled when he laughed, or searched the horizon as he did now.

Emma was about to tell him that she loved him but the
words never left her mouth. A sharp blast of their horn jolted her. Joe's expression switched to one of surprise. An oncoming car had veered onto their side of the road, leaving them no escape from a head-on crash.

Joe twisted the wheel, swerving to miss the collision.

The SUV was airborne with the world churning, glass breaking, metal crunching, sparks flying, as it rolled and rolled before everything went black.

When Emma came to, she was outside their vehicle, facedown on the ground. Her vision was blurred. Something was ringing in her ears. Their horn was blaring.

Tyler was screaming somewhere, but Emma couldn't see him.

He'd gone halfway through the windshield. Emma crawled to him, reached for him and took his hand.

Emma passed out, came to, then did it again and again.

She could smell gas, burning rubber. Something was hissing, she heard car doors, people running, someone shouting. Someone was checking the wreckage. Everything was hazy.

Emma's heartbeat thundered in her ears.

Emma felt Joe's pulse stop as people carried her away.

“Get my husband out! Find my baby!”

The air around them spasmed as if hammered by an invisible fist that delivered the heat flash and fireball as the SUV ignited.

Someone rescued Tyler. Emma saw them carry him to safety.

Or she thought she did.

Where was her baby?

Oh, God!
Tyler had to be safe. He had to be, because he wasn't screaming anymore.

And the Hippos Were Boiled in their Tanks by William S. Burroughs and Jack Kerouac
Pamela Sherwood by A Song at Twilight
To Davy Jones Below by Carola Dunn
Star Shot by Mary-Ann Constantine
The Good Daughter by Diana Layne
A Reluctant Queen by Wolf, Joan
Havana Harvest by Landori, Robert
Love by Chance (A Contemporary Romance) by Elizabeth, Debra
The Burglar Who Thought He Was Bogart by Lawrence Block
Mira Corpora by Jeff Jackson