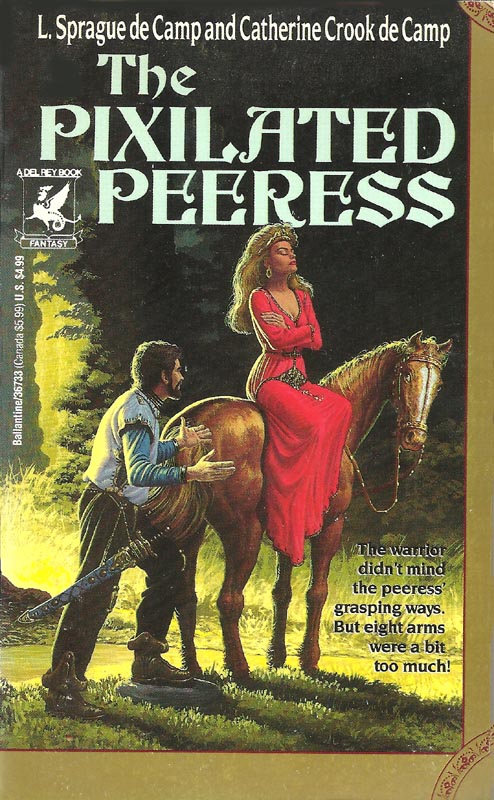 I
–
The Captivating Countess

XI
–
A Sufficiency Of Slaughter

I
–
The Captivating Countess

Thorolf
Zigramson laid his scabbarded sword on the grass and baited his hook with a squirming green grub. He tossed the hook into the pool in the mountain stream and watched the crim
son float bob amid the silvery ripples. He gathered his russet cloak to sit down
on the greensward when, a few paces downstream, a holly-green spruce sapling spoke:

"Goodman! Pray give me some clothes!"

Thorolf started. Dropping his fishpole, he clapped a bronzen hand to the hilt of his dagger. "What say you, bush?"

The sapling's
voice, though musical still, took on a note of command. "I said, give me some clothes! Your cloak will do, to start."

"Forsooth! And why should I give my good Tyrrhe
nian mantle away to the first bush that begs for it?"

"Oaf! The proper address for one of my rank is 'my lady' or 'your Highness.' "

Thorolf sheathed his dagger with a smile. "A female shrub, forsooth? You are the first plant
I ever heard to claim nobility. Not that it signifies aught in Rhaetia; we long ago abolished titles."

The soprano voice rose
in exasperation. "I know that, yokel! That is why you have no government worth the name. But I am in sore need of garments. You should have the courtesy
—
"

"Wherefore not?" demanded T
horolf. "I am not decent."

Thorolf smiled through his beard. "Let not that pre
vent you. I know persons of all degrees, including some given to crass indecencies."

"Not indecent in a moral sense, blockhead! I beg your raiment because I lack proper atti
re."

With slow deliberation, Thorolf picked up his fish-pole. "No meeting, no garments. Now go away; you frighten the fish."

From behind the conifer sapling stepped a slight, fair-skinned young woman, naked save fo
r a golden coronet on her aureate hair. Although but little over five feet tall and a jot too slender for Thorolf's taste, she was a beautiful creature.

"Good gods!" he exclaimed, dropping his rod for the second time. "Are you, mayhap, the Queen of the F
airies?"

"Nay;
a mortal woman in distress. I h
ight Yvette, Countess of Grintz."

Thorolf glanced up uncertainly at the snowcapped peaks of the Helvetians, where dwelt the trolls; then bowed slightly. "Forsooth, Countess, your garb be
comes you, albeit a
trifle impractical for this cool mountain clime."

He picked up his cloak, shook a fallen leaf out of its folds, and handed it to the woman, who swirled it around herself. Since Thorolf was big. all the Countess but her coroneted head disappeared into th
e russet gar
ment.

"How gat you into this predicament, my lady?" he asked.

"I fled the men of Duke Gondomar of Landai, who pursued me across the border. Thinking I had given them the slip for good, I paused for a dip in this stream, in a pool well belo
w this one. Whilst bathing I heard their clatter round the bend of the Rissel and outcry as they espied my mount and abandoned garments. Ere they came in sight, I splashed across to the farther bank, climbed out, and ran. Seeing you, I hid behind that tre
e
."

"Did the men of the Duke discover you?
"

Thorolf considered what he might do if he were chas
ing such a quarry. The Duke's men plainly paid no heed to Rhaetian sovereignty. While reflecting, he changed the subject:

"Why do you wea
r that little crown? It suits not your bathing costume."

Unsmilingly, Yvette replied: "I dared not lay down my coronet whilst I did bathe, and a good thing, too. Lacking gold and jewels, I count upon this bauble to pay for mercenaries to regain my lands.
"

Aside from the Countess' beauty and unconventional garb, Thorolf was struck by the woman's utter self-confidence. So certain an aristocratic poise aroused in him
—
a Commonwealth citizen owing no devoir to any noble
—
a shadowy urge to kneel and utter oath
s of fe
alty. He conquered the impulse but reflected that the sage who proclaimed that universal nudity would place all mankind on a uniform level had never met Yvette of Grintz. To cover his momentary confusion he gruffly said:

"That cloak is but a loan
, my lady. I shall want it back when we find you more suitable raiment."

Yvette studied him. "Trust a Rhaetian to keep close track of's property! But from your speech you are no yokel. Who in sooth are you?"

Thorolf placed a hand on his chest and bowed
. "Act
ing Sergeant Thorolf Zigramson of the Fourth Com
monwealth Foot, at your service."

"Oh, a soldier! You have the thews for it." She studied the massively muscled, broad-shouldered young man from his short black hair and well-trimmed beard to his du
sty, well-worn boots. "Findst it an exciting trade?"

He considered. "Not the word I'd use, madam. True, just before a battle one's heart beats faster, when one is torn betwixt fear of what's coming and fear of show
ing one's fear. When the fighting start
s, one is too busy trying to save one's life whilst depriving others of theirs to think on such matters. But most of a soldier's time is plain hard work, especially since we adopted the Batavian system."

"All men of a unit must dress exactly alike. When my father served his hitch as a youth, to tie a colored scarf about one's arm or hat sufficed; but no more. If, however, a garment gives out on a campaign, the sol
dier must buy or steal whatever replaceme
n
t he can. So an army that sets forth brave in uniform garb returns in motley.

"Then we must drill, drill, drill, so that all shall obey instantly and precisely, as if the soldier were but a cog
wheel in a vast machine of clockwork."

"It is, but it works. Thus the Batavians drove the Emperor's troops from their swampy land."

She changed the subject. "Said you Thorolf Zigramson?
"

"Then, are you perchance kin to Consul Zigram?
"

A
s Yvette began another question, Thorolf raised a hand. "Let's intermit the questions, Countess. If we stand here havering, your Duke's men may yet catch us in their dip net. Shog along!"

Thorolf hoisted his baldric over his head and gath
ered pole, net,
and creel.

Yvette said: "I cannot walk far; my poor feet are half flayed."

"My horse is nigh. She'll bear the twain."

When they reached the big, staked-out mare, Yvette frowned. "This cloak were of small avail for riding pillion. Couldst lend me you
r hosen?"

Thorolf sighed. "Your Ladyship is not the easiest damsel to succor; I fancy riding bare-arsed no more than you. But
—
here!" He peeled off his leather jacket and'then his white linen shirt. The latter he held out, saying, "Put your legs in the sl
eeves and tie the shirt-tails about your waist."

With a sputter of laughter, Yvette complied. Thorolf looked her over. "Unsuitable for a coronation ball; but 'twill do, 'twill suffice. Now place your foot in my hands, and up you go!"

They trotted briskly along a little-used trail, with Yvette, clutching Thorolf's belt and hiding her coronet within the cloak, perched sideways on the horse's rump. The path sloped down. As they reached the lower lev
els, deciduous trees
—
oak, beech, and m
a
ple
—
appeared among the ubiquitous conifers, their foliage crisp and brown with the fading of summer. Over his shoulder, the soldier remarked: