The Place of Dead Kings 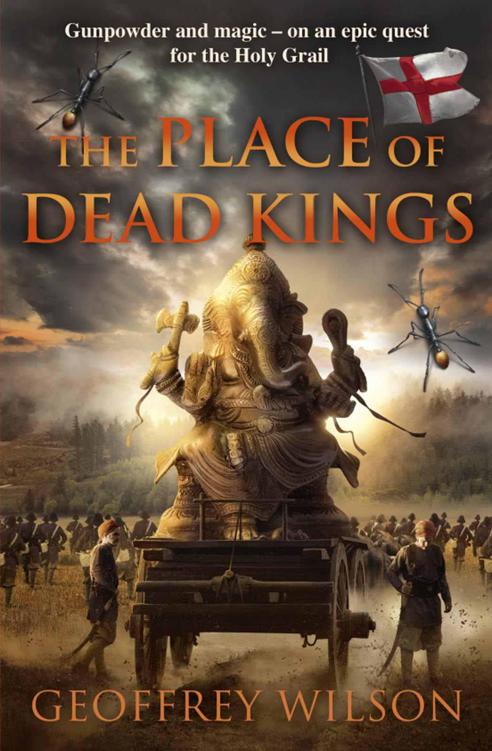 Land of Hope and Glory

Geoffrey Wilson was born in South Africa, grew up in New Zealand and then backpacked around the world before eventually settling in the United Kingdom.

He studied Hinduism and Buddhism at the University of Canterbury, New Zealand, and has been fascinated by India since travelling there in the early 1990s.

He worked in IT for several years, eventually starting a web development business with three friends.

The right of Geoffrey Wilson to be identified as the Author of the Work has been asserted by him in accordance with the Copyright, Designs and Patents Act 1988.

For my parents, Gail and Harry, and my brother, Edward

S
aleem al-Rashid scrambled through the tangled woods. The night was so dark he could barely see the way ahead, the forest nothing but a suggestion of interlocking branches. Thick bracken grasped at him, twigs scratched and vines snared his legs.

But he stumbled on. He had to deliver the message to Colonel Drake. And he had to do it quickly.

Artillery fire punched off to his left. He saw the momentary flare of the blasts through the trees.

A round shot whistled overhead, then thrashed through the leaves like a giant bird. Another shot cracked through branches and thumped into the earth. The missiles were falling all around him, but he couldn’t see them in the dark, just hear them shrieking and slashing at the forest.

His heart pounded and sweat filmed his face.

Would he be hit? There was no point thinking about it. There was nothing he could do to protect himself anyway. He had to keep running. That was all.

‘Saleem,’ Yusuf called behind him.

Saleem spun round. His comrade stood more than thirty feet back, his eyes wide and his mouth hanging open.

‘What is it?’ Saleem shouted.

Foot’s stuck? What was Yusuf talking about? Here they were on an important mission, with shot falling all around them, and now Yusuf had trapped his foot. They would both be smashed to pieces. They wouldn’t get the message to Drake. The enemy would overrun them all and march on through Wiltshire—

A ball shredded the foliage directly above. Twigs and scraps of leaves twirled down.

He had to stay calm.

And he shouldn’t think badly of Yusuf. His comrade was a fellow soldier and a fellow Muslim. Saleem’s father had always taught him to respect others, to show self-restraint, and to be patient even in the most trying situations. These things were laid out in the Quran, and you had to follow the Quran even in the middle of a battle.

Saleem took a deep breath and hurried back. Yusuf was crouching and frantically trying to pull his leg out from where it was trapped between a pair of tree roots.

Yusuf looked up. A gun rumbled on the far side of the valley. The glare fingered its way through the branches and lit up his face for a moment. His skin was pale and shone with sweat, while his wild eyes darted around constantly as if the enemy were about to appear out of the shadows at any moment.

Yusuf was eighteen, only a year younger than Saleem, but this would be his first taste of combat. Saleem found it strange to realise he was a veteran by comparison. Three years ago he’d fought at the Siege of London, surviving a bombardment worse than that being hurled at the forest now. Remembering this somehow reassured him. Made him feel more like a real soldier. A knight.

‘It’s all right.’ Saleem put his hand on Yusuf’s shoulder. ‘I’ll get you out.’

Saleem bent and investigated Yusuf’s leg. The foot had somehow forced its way into the hole and now refused to come free. Saleem stood again, tensed, then slammed the sole of his boot into one of the tree roots. The root shifted a little but not enough. Saleem leant back, then kicked again. The root cracked and Yusuf yanked his foot out, tripping backwards.

‘You all right?’ Saleem asked.

Yusuf put all his weight on the foot. ‘It’s fine.’ He glanced up and smiled. ‘Let’s get moving.’

Saleem grinned back. But then felt a twinge of shame. Hadn’t he been arrogant in thinking he was a veteran? Did he think taking part in one battle three years ago made him a knight? Did he think he was so much better than Yusuf?

The Quran taught humility – his father had often told him this – and yet he’d let himself get carried away with thoughts of grandeur. He looked down, feeling his face redden.

They set off again, fumbling through the mesh of undergrowth. Saleem’s knife-musket bounced on his shoulder and snagged on bushes.

Ahead, a speck of fire streaked down through the canopy and slapped into the ground. A flash lit up the moss-covered trees for a moment, then a sheet of flame erupted from the earth. The roar shook the woods and flying metal screamed in the dark, lashing branches and clipping leaves.

Saleem ducked and pulled Yusuf down with him. He heard a large chunk of metal whirl past overhead.

Yusuf stared at Saleem, eyes even wider than before.

Yusuf swallowed hard and wiped the sweat from his forehead with his sleeve.

They peered over the brush and saw fire crackling where the shell had struck.

‘Come on.’ Saleem pulled Yusuf to his feet. ‘Keep going.’

They pressed on, clambering up a slight incline while the guns continued to rumble. Further shells hurtled down like tiny comets and smacked into the earth. The bright blasts sent the shadows dancing and the whiplash of metal fragments echoed deep in the forest. Flames hissed as they engulfed trees and spat sparks into the night.

Saleem felt a stone in his throat. His father had died more than a year ago, after collapsing suddenly for no apparent reason. The old man, who had seemed so tall and strong and implacable and stern, was gone. And that left Saleem alone to look after his mother and five sisters.

He reached the top of the slope and came to the edge of the woods. Figures crouched in the undergrowth around twenty yards ahead. For a moment Saleem wondered whether they were enemy troops, but then he saw they wore civilian tunics and hose. They were rebels, like him. Most people called them crusaders, but Saleem could never bring himself to use that term. The word was enough to put many Muslims off joining the struggle. Before he died, Saleem’s own father had often told him not to fight for the Christians. But Saleem knew he had to fight. He was an Englishman and he would defend his country.

Saleem ran towards the huddled soldiers. With the trees opening up, he could see he’d reached the summit of the hill.

A scene of terrible beauty unfurled before him.

A grassy slope rolled down to a dark valley, on the far side of which rose a further hill, indistinct against the black sky. An unholy thunderstorm seemed to crackle across the hill’s crest. The enemy guns flickered like sheet lightning, streaking the clouds above orange. The deep booms rocked the valleys and gullies. And from somewhere behind, Saleem heard the pounding of the rebel artillery returning fire.

The sky seethed with sparks and flashes. Shells darted across the valley like fireflies on a summer evening, while explosions roared and tore open the night. Specks of flame wheeled overhead.

Saleem swallowed, slowed his pace for a second and then ran on.

One of the rebels – a tall man with a musket slung over his shoulder – stood up and shouted, ‘Greetings.’ Then he glanced at the skullcaps on Saleem and Yusuf’s heads and his expression shifted, like the subtle movement of sand on a dune.

Saleem knew that look well – he’d seen it all his life. It was a mixture of surprise, distaste and suspicion. The expression of a Christian seeing one of the old enemies of England.

‘Drake?’ the soldier said. ‘He’s with the Amesbury Battalion. About half a mile down there.’ He nodded along the line of the forest. ‘Why?’

‘Got a message from Colonel al-Hasan. Vadula’s army is marching on our position. They aren’t attacking from the west.’

The rebel forces had been retreating for days as the much larger army of Mahasiddha Samarth Vadula advanced into Wiltshire. Earlier in the day, Saleem had fled with the other rebels to their position on the hill. The rebel commanders had planned to hold the ridge, expecting an attack tomorrow in the west. But as Saleem waited in the east with his comrades in the Muslim Battalion, sentries spied a large party of Rajthanan and Andalusian troops crossing the valley. Vadula had obviously decided on a surprise night-time attack where the rebels were weakest. The Muslims were outnumbered three to one, and had no artillery.