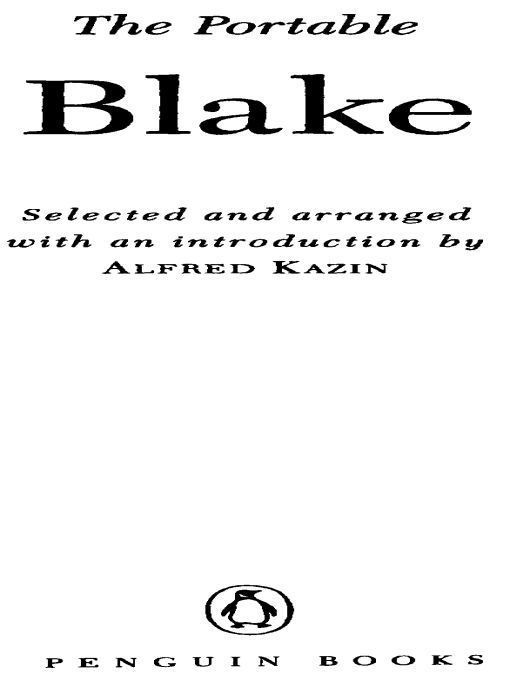 Table of Contents
THE VIKING PORTABLE LIBRARY
Title Page
Copyright Page
Acknowledgements
Introduction
I. - THE YOUNG BLAKE
From POETICAL SKETCHES
II. - THERE IS NO NATURAL RELIGION and ALL RELIGIONS ARE ONE
THERE IS NO NATURAL RELIGION
ALL RELIGIONS ARE ONE
III. - SONGS OF INNOCENCE AND OF EXPERIENCE
SONGS OF INNOCENCE
SONGS OF EXPERIENCE
ADDITIONAL POEMS
IV. - VERSES AND FRAGMENTS FROM THE ROSSETTI AND PICKERING MANUSCRIPTS
FIRST SERIES
SECOND SERIES
V. - SELECTIONS FROM THE LETTERS
LETTERS
VI. - THE PROPHETIC BOOKS
THE MARRIAGE OF HEAVEN AND HELL
FOR THE SEXES: THE GATES OF PARADISE
THE BOOK OF THEL
VISIONS OF THE DAUGHTERS OF ALBION
AMERICA - A PROPHECY
EUROPE
THE FIRST BOOK OF URIZEN
THE BOOK OF AHANIA
THE BOOK OF LOS
THE SONG OF LOS
From THE FOUR ZOAS
From MILTON
From JERUSALEM
VII. - ON ART, MONEY, AND THE AGE
From THE LAOCOÖN GROUP
From A DESCRIPTIVE CATALOGUE OF PICTURES, POETICAL AND HISTORICAL INVENTIONS, ...
From PUBLIC ADDRESS - [From the Rossetti MS.]
ON HOMER’S POETRY & ON VIRGIL
MARGINALIA, I
EPIGRAMS AND VERSES CONCERNING SIR JOSHUA REYNOLDS
MARGINALIA, II
EPIGRAMS, VERSES, AND FRAGMENTS
VIII. - THE OLD BLAKE
FRAGMENTS - INSCRIPTION IN THE AUTOGRAPH ALBUM OF WILLIAM UPCOTT
THE EVERLASTING GOSPEL
A VISION OF THE BOOK OF JOB
From A VISION OF THE LAST JUDGMENT - [From the Rossetti MS]
APPENDIX
BLAKE CHRONOLOGY
BIBLIOGRAPHY
INDEX
THE VIKING PORTABLE LIBRARY
FOR THE BEST IN PAPERBACKS, LOOK FOR THE
THE VIKING PORTABLE LIBRARY
William Blake
William Blake was born in Broad Street in 1757, the son of a London hosier. Having attended Henry Parr’s drawing school in the Strand, he was in 1772 apprenticed to Henry Basire, engraver to the Society of Antiquaries, and later was admitted as a student to the Royal Academy, where he exhibited in 1780. He married Catherine Boucher in 1782 and in 1783 published
Poetical Sketches.
The first expression of his mysticism appears in
Songs of Innocence
(1789), which, like
The Book of Thel
(published in the same year), has as its main theme the constant presence and power of divine love even in the midst of evil.
Blake’s visionary ideas are developed further in his chief prose work,
The Marriage of Heaven and Hell
(1790), where he denies the theory of eternal punishment and the reality of matter. His revolt against authority is expressed in much of his subsequent writing, and in
Songs of Experience
(1794) he protests against restrictive codes and celebrates the spirit of love. The chief works which Blake produced during this decade are mythological and are intended to expose the failings of the moral code. His final symbolic works are ‘Milton’ and ‘Jerusalem’. The minor poems that followed include some exquisite lyrics, notably ‘The Morning’ and ‘The Land of Dreams’.
Little of Blake’s work was published on conventional form. He combined his vocations as poet and graphic artist to produce books that are visually stunning. He also designed illustrations of works by other poets and devised his own technique for producing large watercolour illustrations and colour-printed drawings. Blake died in 1827, ‘an Old Man feeble & tottering but not in Spirit & Life not in the Real Man The Imagination which Liveth for Ever’.
Alfred Kazin is Distinguished Professor of English at the Graduate Center of the City University of New York and Hunter College. He is the author of
On Native Grounds, New York Jew,
and
An American Procession,
among other books.
Each volume in The Viking Portable Library either presents a representative selection from the works of a single outstanding writer or offers a comprehensive anthology on a special subject. Averaging 700 pages in length and designed for compactness and readability, these books fill a need not met by other compilations. All are edited by distinguished authorities, who have written introductory essays and included much other helpful material.

A LINE is a line in its minutest subdivisions, straight or crooked. It is itself, not intermeasurable by anything else. Such is Job. But since the French Revolution Englishmen are all intermeasurable by one another: certainly a happy state of agreement, in which I for one do not agree. God keep you and me from the divinity of yes and no too—the yea, nay, creeping Jesus—from supposing up and down to be the same thing, as all experimentalists must suppose.
BLAKE: April 12, 1827
EDITOR’S ACKNOWLEDGMENTS
The selections for this volume have been taken almost entirely from the “Nonesuch Press” edition of Blake’s complete writings in poetry and prose, edited by Geoffrey Keynes, (Nonesuch Press, London; Random House, New York). I cannot easily express my indebtedness to Dr. Keynes, who did the real work for this volume, and to his American publishers, Random House, Inc., who have facilitated its publication. The selections from Crabb Robinson’s
Reminiscences
have been taken from Arthur Symons’s supplement to his
William Blake,
London, 1907, where the notes on Blake were printed as a separate unit for the first time.
I should like to express my indebtedness to John Sampson’s edition of Blake’s “Poetical Works” (Oxford University Press), for guidance in making my own selections from
The Four Zoas, Milton,
and
Jerusalem,
I am equally indebted to D. J. Sloss and J. P. R. Wallis, editors of the Clarendon Press (Oxford, 1926) edition of Blake’s Prophetic Writings in two volumes. Without their editorial analysis, list of variants and unique glossary of Blake’s symbols, my own work would have been far more difficult.
I owe a great debt to many pioneer scholars in the field of Blake scholarship. In particular I should like to acknowledge, with gratitude and pleasure, the work of Swinburne; Joseph Wicksteed; S. Foster Damon; Max Plowman; Alexander Gilchrist; Mona Wilson; Arthur Symons; William Butler Yeats; John Sampson; Ruthven Todd; Geoffrey Grigson; J. Bronowski.
I should like to thank Pascal Covici for suggesting this work, and for his friendly encouragement. I am deeply grateful to Dr. Ruth Bunzel for many valuable suggestions. I owe much to John Marshall and David Stevens of the Rockefeller Foundation, and to Louis Wright and the staff of the Huntington Library, San Marino, California, for making possible a study of Blake manuscripts. And emphatically not least, I should like to thank here my students and friends at Black Mountain College, North Carolina, with whom I read Blake in the Fall quarter, 1944.
A. K.
INTRODUCTION
The real man, the imagination.
In 1827 there died, undoubtedly unknown to each other, two plebeian Europeans of supreme originality: Ludwig van Beethoven and William Blake. Had they known of each other, they could still not have known how much of the future they contained and how alike they were in the quality of their personal force, their defiance of the age, and the fierce demands each other had made on the human imagination.
It is part of the story of Blake’s isolation from the European culture of his time that he could have known of Beethoven, who enjoyed a reputation in the London of the early 1800’s. The Ninth Symphony was in fact commissioned by the London Philharmonic, who made Beethoven’s last days a little easier. The artistic society of the day was appreciative of Beethoven. It ignored the laborious little engraver, shut off by his work and reputed madness, who was known mainly to a few painters, and held by most of them to be a charming crank.
It is hard to imagine Blake going to concerts or reading accounts of Beethoven’s music. He never traveled. Except for one three-year stay at a cottage in Sussex, he hardly went out of London. Like his father and brothers, he lived the life of a small tradesman—at one time he kept a printshop. He was always very poor, and generally worked in such seclusion that at one period, near the end of his life, he did not leave his house for two years, except to go out for porter. Blake had instinctive musical gifts; in his youth and old age he spontaneously, when in company, sang melodies to his own lyrics. Musicians who heard them set them down; I wish I knew where. Even on his deathbed, where he worked to the last, he composed songs. But he had no formal musical knowledge and apparently no interest in musical thought. Self-educated in every field except engraving, to which he had been apprenticed at fourteen, his only interest in most ideas outside his own was to refute them. He always lived and worked very much alone, with a wife whom he trained to be the mirror of his mind. The world let him alone. He was entirely preoccupied with his designs, his poems, and the burden—which he felt more than any writer whom I know—of the finiteness of man before the whole creation.