Read The Price Of Spring Online

The Price Of Spring 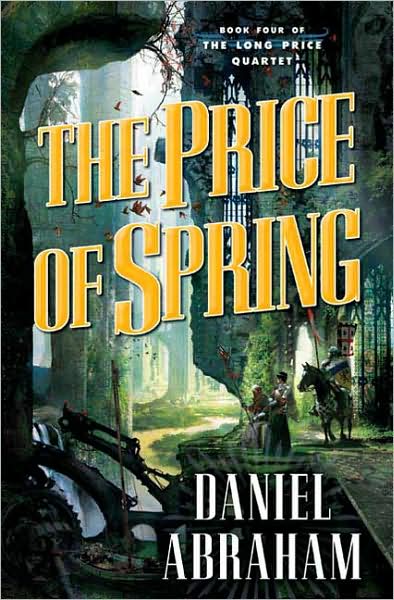 THE PRICE OF SPRING

THE PRICE OF SPRING: BOOK FOUR OF THE LONG PRICE QUARTET
Copyright © 2009 by Daniel Abraham
All rights reserved, including the right to reproduce this book, or portions thereof, in any form.

First Edition: ,July 2009 Printed in the united States of America

For the last time on this project, I reflect on the people who have helped me get to the end of it. I owe debts of service and gratitude to Walter Jon Williams, Melinda Snodgrass, Emily Mah, S. M. Stirling, Ian Tregillis, Ty Franck, George R. R. Martin, Terry England, and all the members of the New Mexico Critical Mass Workshop. I owe thanks to Connie Willis and the Clarion West '98 class for starting the story off a decade ago. Also to my agents Shawna McCarthy, who kept me on the project, and Danny Bator, who has sold these books in foreign lands and beyond my wildest dreams; to James Frenkel for his patience, faith, and uncanny ability to improve a manuscript; to Tom Doherty and the staff at Tor, who have made these into books with which I am deeply pleased.

Eiah Machi, physician and daughter of the Emperor, pressed her fingers gently on the woman's belly. The swollen flesh was tight, veins marbling the skin blue within brown. The woman appeared for all the world to be in the seventh month of a pregnancy. She was not.

"It's because my mother's father was a Westlander," the woman on the table said. "I'm a quarter Westlander, so when it came, it didn't affect me like it did other girls. Even at the time, I wasn't as sick as everyone else. You can't tell because I have my father's eyes, but my mother's were paler and almost round."

Eiah nodded, running practiced fingertips across the flesh, feeling where the skin was hot and where it was cool. She took the woman's hand, bending it gently at the wrist to see how tight her tendons were. She reached inside the woman's sex, probing where only lovers had gone before. The man who stood at his wife's side looked uncomfortable, but Eiah ignored him. He was likely the least important person in the room.

"Eiahcha," Parit, the regular physician, said, "if there is anything I can do..."

Eiah took a pose that both thanked and refused. Parit bowed slightly.

"I was very young, too," the woman said. "When it happened. Just six summers old."

"I was fourteen," Eiah said. "How many months has it been since you bled?"

"Six," the woman said as if it were a badge of honor. Eiah forced herself to smile.

"Is the baby well?" the man asked. Eiah considered how his hand wrapped his wife's. How his gaze bored into her own. Desperation was as thick a scent in the room as the vinegar and herb smoke.

"It's hard to say," Eiah said. "I haven't had the luck to see very many pregnancies. Few of us have these days. But even if things are well so far, birthing is a tricky business. Many things can go wrong."

"He'll be fine," the woman on the table asserted; the hand not being squeezed bloodless by her man caressed the slight pooch of her belly. "It's a boy," she went on. "We're going to name him Loniit."

"Thank you for letting me make the examination," Eiah said. "You're very kind. And I wish the best of luck to you both."

"All three," the woman corrected.

She walked from the room while Parit arranged his patient. The antechamber glowed by the light of a small lantern. Worked stone and carved wood made the room seem more spacious than it was. Two bowls, one of old wine and another of fresh water, stood waiting. Eiah washed her hands in the wine first. The chill against her fingers helped wash away the warmth of the woman's flesh. The sooner she could forget that, the better.

Voices came from the examining room like echoes. Eiah didn't listen. When she put her hands into the water, the wine turned it pink. She dried herself with a cloth laid by for the purpose, moving slowly to be sure both the husband and wife were gone before she returned.

Parit was washing down the slate table with vinegar and a stiff brush. It was something Eiah had done often when she'd first apprenticed to the physicians, all those years ago. There were fewer apprentices now, and Parit didn't complain.

"There's no child in her," Eiah said.

"Of course not," he said. "But the signs she does show. The pooled blood, the swelling. The loss of her monthly flow. And yet there's no slackening in her joints, no shielding in her sex. It's a strange mix."

Parit stopped. His hands took a pose of query. Eiah sighed and leaned against one of the high stools.

"Desire," Eiah said. "That's all. Want something that you can't have badly enough, and the longing becomes a disease."

Her fellow physician and onetime lover paused for a moment, considering Eiah's words, then looked down and continued his cleaning.

"I suppose we should have said something," he said.

"There's nothing to say," Eiah said. "They're happy now, and they'll be sad later. What good would it do us to hurry that?"

Parit gave the half-smile she'd known on him years before, but didn't look up to meet her gaze.

"There is something to be said in favor of truth," he said.

"And there's something to be said for letting her keep her husband for another few weeks," Eiah said.

"You don't know that he'll turn her out," he said.

Eiah took a pose that accepted correction. They both knew it was a gentle sarcasm. Parit chuckled and poured a last rinse over the slate table: the rush of the water like a fountain trailed off to small, sharp drips that reminded Eiah of wet leaves at the end of a storm. Parit pulled out a stool and sat, his hands clasped in his lap. Eiah felt a sudden awkwardness that hadn't been there before. She was always better when she could inhabit her role. If Parit had been bleeding from the neck, she would have been sure of herself. That he was only looking at her made her aware of the sharpness of her face, the gray in her hair that she'd had since her eighteenth summer, and the emptiness of the house. She took a formal pose that offered gratitude. Perhaps a degree more formal than was needed.

"Thank you for sending for me," Eiah said. "It's late, and I should be getting back."

"To the palaces," he said. There was warmth and humor in his voice. There always had been. "You could also stay here."

Eiah knew she should have been tempted at least. The glow of old love and half-recalled sex should have wafted in her nostrils like mulled wine. He was still lovely. She was still alone.

"I don't think I could, Parit-kya," she said, switching from the formal to the intimate to pull the sting from it.

"Why not?" he asked, making it sound as if he was playing.

"There are a hundred reasons," Eiah said, keeping her tone as light as his. "Don't make me list them."

He chuckled and took a pose that surrendered the game. Eiah felt herself relax a degree, and smiled. She found her bag by the door and slung its strap over her shoulder.

"You still hide behind that," Parit said.

Eiah looked down at the battered leather satchel, and then up at him, the question in her eyes.

"There's too much to fit in my sleeves," she said. "I'd clank like a toolshed every time I waved."

"That's not why you carry it," he said. "It's so that people see a physician and not your father's daughter. You've always been like that."

It was his little punishment for her return to her own rooms. There had been a time when she'd have resented the criticism. That time had passed.

He took a pose of farewell, and then walked with her to the door. In the courtyard of his house, the autumn moon was full and bright and heavy. The air smelled of wood smoke and the ocean. Warmth so late in the season still surprised her. In the north, where she'd spent her girlhood, the chill would have been deadly by now. Here, she hardly needed a heavy robe.

Parit stopped in the shadows beneath a wide shade tree, its golden leaves lined with silver by the moonlight. Eiah had her hand on the gate before he spoke.

"Was that what you were looking for?" he asked.

She looked back, paused, and took a pose that asked for clarification. There were too many things he might have meant.

"When you wrote, you said to watch for unusual cases," Parit said. "Was she what you had in mind?"

"No," Eiah said. "That wasn't it." She passed from the garden to the street.

A decade and a half had passed since the power of the andat had left the world. For generations before that, the cities of the Khaiem had been protected by the poets-men who had dedicated their lives to binding one of the spirits, the thoughts made flesh. Stone-Made-Soft, whom Eiah had known as a child with its wide shoulders and amiable smile, was one of them. It had made the mines around the northern city of Machi the greatest in the world. WaterMoving-Down, who generations ago had commanded the rains to come or else to cease, the rivers to flow or else run dry. Removing-the-Part-That-Continues, called Seedless, who had plucked the seeds from the cotton harvests of Saraykeht and discreetly ended pregnancies.