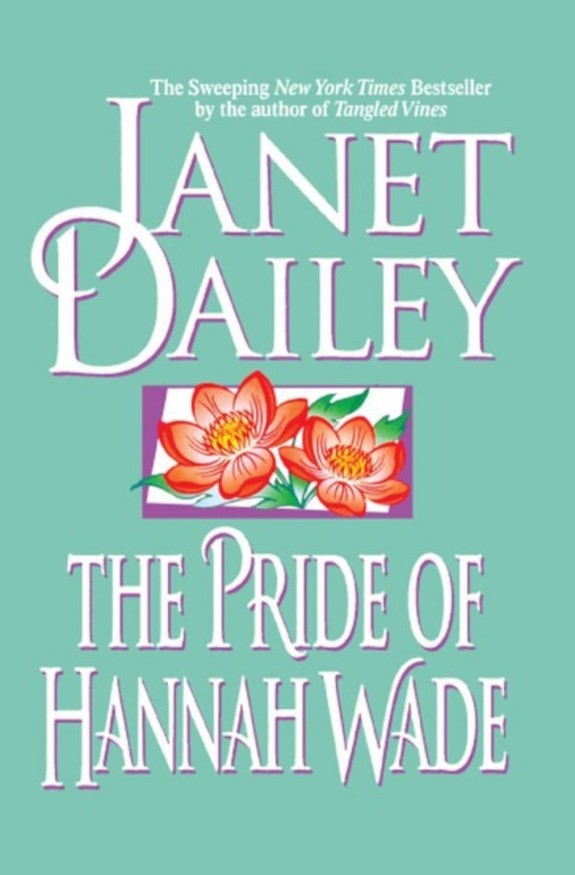 Critical Acclaim for Janet Dailey’s
THE PRIDE OF HANNAH WADE...

“Readers who love Janet Dailey will no doubt ve
THE PRIDE
OF
HANNAH WADE.
ailey’s novels have always been marked by strong stories that barrel along at full throttle. ... An atmospherically charged, action-filled story.”

“Janet Dailey weaves a wonderfully romantic tale, and
THE PRIDE OF HANNAH WADE
is no exception. . . . A spellbinding story.”

“Janet Dailey’s ability to recreate the West is enhanced by a courageous heroine and a ruggedly appealing hero. . . .
THE PRIDE OF HANNAH WADE IS JANET DAILEY AT HER BEST.”

The Best Way to Lose

This book is a work of historical fiction. Names, characters, places and incidents relating to non-historical figures are either the product of the author’s imagination or are used fictitiously. Any resemblance of such non-historical incidents, places or figures to actual events or locales or persons, living or dead, is entirely coincidental.

All rights reserved, including the right to reproduce
this book or portions thereof in any form whatsoever.
For information address Pocket Books, 1230 Avenue
of the Americas, New York, NY 10020

POCKET and, colophon are registered trademarks of Simon & Schuster, Inc.

“O
UT HERE, A LADY HAS TO SURVIVE THE BEST WAY SHE
can,” Hannah Wade offered in droll sympathy to the young woman showing her dismay as she looked about the huddle of adobe buildings, stacked with pottery and wares inside and out. “Sometimes that means enduring unladylike conditions.”

Suddenly the hot stillness was broken by the clatter of unshod hooves pounding across the hard desert floor. One minute the only dust that stirred in the nameless, half-Mexican settlement of straw-and-mud-brick adobe buildings was raised by the trailing hems of the fashionably bustled dresses worn by the three army officers’ wives—and in the next dust swirled in a
low-hanging haze around the scrawny piebald ponies and their Apache riders.

Hannah Wade stiffened at the sight of the Indians charging toward them. No shouts or war cries shattered the air; that was not the Apache way, which was a practice of stealth, silence, and surprise. Two long years of watching her husband ride out at the head of cavalry companies had taught her that much.

In the seconds they had before the Apaches were on them, Hannah glanced at their escorting officer, whose rough features were shaded by the brim of his campaign hat. “Captain?” The thread of alarm, in her low voice demanded his instruction and guidance, but her poise remained as smooth as the coil of mahogany hair at the nape of her neck.

His hand was already lifted, forestalling any action by the black sergeant and the two black troopers waiting by the army ambulance, the military conveyance that had brought the women to this trading settlement. “Be at ease, ladies.” Captain Jake Cutter raised a long, thin cigar to his mouth, his narrowed and keen blue eyes showing a watchful calm. The gauntlet-style gloves were tucked through his belt, leaving his large hands bare.

The Apaches halted their ponies in the small clearing, filling it with billowing alkali dust. Four of them dismounted and advanced toward the brush-roofed
ramada
where Hannah stood. Lieutenant Sloane’s young wife was at her side and somewhere behind her was Ophelia Bettendorf, wife of the commanding officer at Fort Bayard.

Mrs. Sloane, who was new to the territory, gave a little cry of fear at the approach of the unkempt-looking savages. At the same instant, Hannah noticed the small band had isolated them from the army ambulance and the soldiers—and any protection they might lend. Captain Jake Cutter continued to occupy a corner of her
side vision, the pungent smell of his cigar mixing with the raised dust in the air.

No war paint adorned the blunt-featured faces of the Apaches, and the weapons they carried were held in loose readiness, not brandished in a threatening manner. Some of the high tension left Hannah as she recognized that the captain’s split-second reading of the situation had been accurate; they were not being attacked.

With an effort, Hannah ignored the silent menace of the Apaches’ presence and turned from the stare of the Sat black eyes to the young wife of the recently transferred Lieutenant Richard Sloane. “Do you suppose the Apaches guessed you are a new arrival, Mrs. Sloane, and staged all this for your benefit?” The lightness of her voice assured the newcomer that she had nothing to fear.

“Wh—what do they want?” Rebecca Sloane shrank against Hannah as a lithely muscled Apache brave walked toward them.

His shoulders were wide and his chest deep. Bared to the waist, his dark copper skin was covered with a fine, dulling film of dust. A breechcloth was wrapped around his waist, the front hanging to his knees and extending over the buckskin leggings of his high moccasins. His ageless, heavy-boned features had a brutal quality, their harsh composition aggravated by a knife scar across the right cheek.

For a brief instant, contempt showed in his expression as he noted the fear in Rebecca Sloane’s voice and eyes; then he rudely shouldered his way past the women to enter the trader’s small store. Two other braves followed, pushing their way past as well. The rank odor of their bodies was so strong that Hannah pressed a lavender-scented handkerchief to her nose to block out the smell. She was barely able to disguise her disgust for these vile, filthy savages, who bore no
resemblance to the “noble red man” that she’d read about in the eastern newspapers before coming west.

“After all these years on the frontier with the colonel,” the matriarchal Mrs. Bettendorf murmured, “I still find the manners of these heathens insufferable.”

Fear continued to edge Rebecca Sloane’s expression, but it was overcome by an uneasy worry that she might not have acquitted herself well in the eyes of the commander’s wife. “I. . . I’ve never seen a wild Indian before,” she stammered out in her defense. “Only the scouts at the fort. It was rather frightening when they rode up like that.”

“It gave us all a start,” Mrs. Bettendorf assured her, although Hannah personally doubted if anything was capable of shocking this iron woman, a staunch supporter of her husband and his career and the occupant of the female side of the fort’s throne, ruling over the officers’ wives. “As long as those Indians are in that store, I don’t intend to go inside.” With a regal swish of her skirts, the commander’s wife turned and marched to a corner of the shady brush arbor, her amply rounded figure emphasizing the wig-wag of her swagged bustle. “You’ll need some of these clay jars, Mrs. Sloane.”

Ollas were suspended from a corner post of the
ramada.
Hannah drifted after her companions, not listening to the lecture about the dual use of the containers, which kept water cool by evaporation and also provided a cooling effect on the surroundings by the same method. Her attention remained with the Apache warriors left on guard in the clearing. She was curiously repelled and fascinated by them at the same time.

Short of stature and honed to a tough leanness, they wore a ragtag collection of clothing. Two were dressed in the loose-fitting shirts and pants of white men’s
attire, and a third wore buckskin pants and a plaid shirt. One of them, Hannah noticed, was quite heavy for an Apache. Lank black hair hung to their shoulders and below, faded sweatbands around their foreheads. Except for the lizardlike awareness of the eyes catching every movement about them, the Apaches appeared indifferent.

The dust had settled, although the smell of it remained in the still air ... the smell of dust and cigar smoke. She glanced at the holder of the long brown cigar, skimming briefly that hawkish face leathered to a smooth shade of brown by constant exposure to the harsh desert elements. Small seams showed around his features, lines of experience drawn out from the corners of eyes that were as dry and blue as the desert sky—quick eyes that missed nothing, including her glance.

“Are they Chiricahuas?” Although Hannah’s husband’s regiment, the Ninth Cavalry, had only been transferred from Texas to the District of New Mexico six months ago, she had quickly become familiar with the local Indian problems. Since the death of Cochise a year and a half ago, more and more Chiricahua had become discontented with reservation life and left the agency land in neighboring southern Arizona.

“They’re Chiricahuas, but not from Cochise’s band.” From his position in the
ramada’s
shade, Captain Cutter had an unobstructed view of both the clearing and the crudely built adobe store. “More likely, the
Nde-nda-i
group.”

For many newcomers to the Southwest, the Apache tribe was a confusion of smaller bands: the Lipan-Apache, the Kiowa-Apache, the Mescalero, the Jicar-illa, the Chiricahua, and the Western Apache. And each band was made up of groups that shared hunting grounds and cooperated in certain undertakings such as war and religious ceremonies. The groups were composed
of scattered, extended families, the lineage reckoned through both parents although the culture was essentially matriarchal. Each group had leaders, but no chief could make commitments for the whole tribe.

The Vow by Lindsay Chase
The Wages of Sin by Nancy Allen
Dead Is the New Black by Marlene Perez
Matt: Tales of the Were (Redstone Clan Book 5) by Bianca D'Arc
Biker Chick Campout (Rebel Wayfarers MC) by Marialisa Demora
Poisoned Bride and Other Judge Dee Mysteries by Robert H. van Gulik
All In by Molly Bryant
Vendetta Nation (Enigma Black Trilogy #2) by Furlong-Burr, Sara
Crapalachia: A Biography of Place by Scott McClanahan
A Prize Beyond Jewels by Carole Mortimer