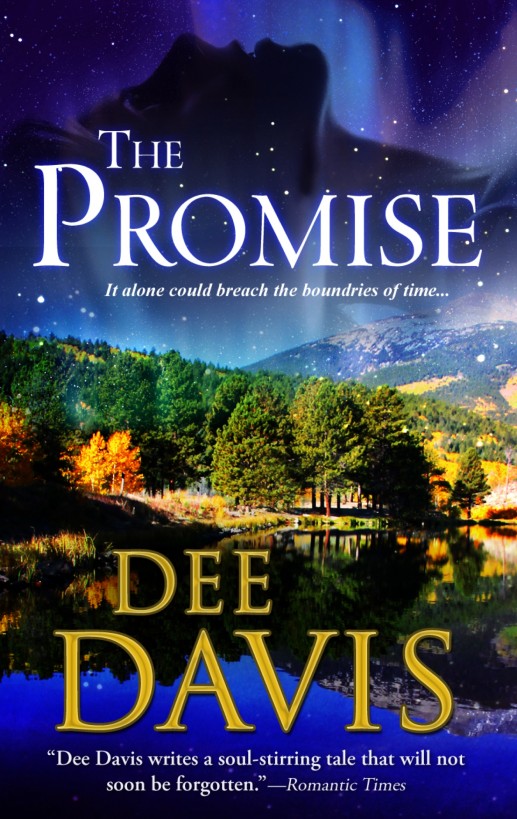 "Author Dee Davis begins the excitement
on the first page and the reader cannot come up for air
until the last page has been turned.   Romance,
excitement, danger, betrayal, it's  all in here!
Recommended!" –Huntress Book Reviews

"The Promise is a wonderful romance that
manages to bridge the plausibility gap and make time travel
all too possible...Characterization is just one of Ms.
Davis' strong points and is once more amply demonstrated with
The Promise." –Scribesworld, 4 1/2 Stars

"Ms Davis is masterful in blending her
characters and their relationships to tie her storyline together.
The Promise is more than the name of a silver mine; it's a promise
of an unusual, sensual adventure that will hold you spellbound.
It's a story where love does conquer all, and one I highly
recommend." –Romance Reviews Today

"This riveting book was hard to put down once
I started reading it.  As always, I eagerly look forward to
the next Dee Davis book." –Best Reviews, four stars

The Promise
is a work of fiction.
Names, characters, places, and incidents are the products of the
author's imagination or are used fictitiously. Any resemblance to
actual events, locales, or persons, living or dead, is entirely
coincidental

No part of this book may be reproduced or
transmitted in any form or by any electronic or mechanical means,
including photocopying, recording or by any information storage and
retrieval system, without the written permission of the publisher,
except where permitted by law.

This ebook is licensed for your personal
enjoyment only. This ebook may not be re-sold or given away to
other people. If you're reading this book and did not purchase it,
or it was not purchased for your use only, then please delete it
and purchase your own copy. Thank you for respecting the hard work
of this author.

This is a republication in ebook format of an
earlier work. Every effort has been made to reproduce the original
as accurately as possible. If you find an error, please let us know
[email protected]

SNEAK PEEK AT EVERYTHING IN ITS
TIME

CHECK OUT THESE BOOKS BY DEE
DAVIS:

Set Up In SoHo

Cottage in the Mist

Who taught me how to dream,

and to my mother,

who taught me how to make my dreams come true.

The woods are lovely, dark and deep.

But I have promises to keep,

And miles to go before I sleep,

And miles to go before I sleep.

"I don't believe I've ever been this happy."
Cara Reynolds hugged herself in the backseat of the car. "It's been
an incredible day."

"Well, you're the only daughter we have." Her
father's voice was teasing, filled with love. "Besides, you're only
going to be sixteen once."

"Probably just as well. I'm not certain I could take
this kind of excitement every day. First you give me the new foal,
then dinner at the Bristol, and now this." She held up the pendant
hanging around her neck. "It's a wonder I'm not spoiled
rotten."

"Who says you aren't?" Her father laughed, and Cara
thought again how incredibly lucky she was. Not everyone had the
family she did. A mother and father who doted not only on her, but
on each other. A grandfather who loved them all. She sighed with
contentment. Life was practically perfect.

"Do you really like the necklace?" Her mother shot a
smile over her shoulder.

Cara caressed the smooth silver, her fingers
memorizing each line of carving. "It's wonderful. It even feels
old."

"Almost a hundred years." Her father squinted
suddenly as a blinding light appeared over the top of a hill. "Come
on fellow, cut your damn brights."

"Jim. There's no need to use profanity." Her mother's
voice was gentle but firm.

Cara watched, mesmerized as the light came closer and
closer, its beam filling the car with clear white light, throwing
everything into relief. Her vision intensified, her mother and
father etched in her brain like a photograph.

There was an odd grinding noise, and she thought she
heard her father curse again. Then, against the sound of metal on
metal and shattering glass, the world spun totally out of control.
She was thrown forward and then whipped backward again, her head
slamming into something hard. Light exploded in her brain, then
vanished, pain crescendoing and then dissipating, blackness rushing
up to meet her, engulfing her…

The world was amazingly quiet. And cold. Something
soft and wet was tickling her nose. And her head hurt. Not just run
of the mill hurt, but threatening to explode hurt. She tried to
remember where she was, but her brain could barely function over
the power of the pain. With a deep breath, she forced her eyes
open.

She was lying in the snow.

Which made absolutely no sense at all.

Gritting her teeth, she slowly pulled herself up on
her elbows, trying to remember where she was. The ground was bathed
in an eerie light. Flickering. Firelight. In a rush everything came
back.

There'd been a wreck.

Her vision cleared and she focused on the burning
wreckage. A pick-up was balanced precariously on two wheels, its
frame resting against something solid. She fought against a wave of
nausea, narrowing her eyes. Their car.

Her brain kicked in with a rush, overriding the pain
to send a terrifying message.

Her parents. Oh God, where were her parents?

Biting back a sob, she screamed out their names. When
her attempts to stand failed, she crawled forward, inch by inch,
still calling for them, her eyes searching the wreckage, her heart
slamming against her ribs, the blood pounding to her brain.

The truck shifted, slamming down on the sedan
underneath. She opened her mouth to scream, but before the sound
could leave her body, both cars suddenly exploded, hot flames
shooting into the air, the falling snow doing nothing to dampen the
fury.

A second explosion rocked the night. And hope died.
Completely. Irrevocably. Cara dropped to the snow, sobs wracking
her body. The pain almost unbearable. This time when the blackness
came, she didn't fight its mind-numbing embrace.

Michael Macpherson pulled his sheepskin coat
tighter around him. It was cold. Ball shattering cold. He bit back
a laugh, hearing his father's voice in his head. Duncan Macpherson
wasn't one to mince words.

And he also wasn't about to be out in this kind of
weather looking for cattle. No sir, he preferred to freeze his
balls off up in the mountains looking for that elusive mother lode.
Or maybe, if he was really smart, he was holed up somewhere with a
bottle of whiskey for company. Michael had to admit that, right at
the moment, the idea held a certain appeal. Not that he would trade
places with his father.

Duncan had his share of problems, but then he also
had Rose. Michael's mother was the love of his life and, truth be
told, Michael longed for someone like that in his life, too.
Someone to wait up nights for him, fire stoked, supper warming.
Someone to share things with, to build a life with.

He sighed. His mother always said there was one man
for one woman, and that his was out there somewhere. Waiting for
him. All he had to do was find her.

Not that he was in any hurry. After all he was only
nineteen. For the time being, he was content to wait. There was
plenty of time left. He squinted into the falling snow, and
tightened his hold on the reins. The storm was worsening, the wind
whipping the snow into a frenzied dance, the force of it bordering
on a blizzard. Urging his horse forward, he searched the gloom for
lost cattle. Pete should have been out here with him. He could have
used the help. But the ranch hand was laid up with a bum knee. An
accident in the corral. And Patrick…

Hell, who knew where the kid was these days? At the
Irish Rose helping his mother and Uncle Owen, no doubt. Patrick had
no interest in ranching. He'd made that more than clear. Michael
reined his horse in, his eyes catching the shadowy mound of a cow
under a tumble of rock.

Damn. It looked dead. He swung his leg over the
saddle and dropped to the ground, his long-legged stride taking him
over to the fallen animal. It was covered in snow, and he bent down
to brush it off, his heart heavy. He needed live cattle if he was
going to make a go of his homestead, and the harsh Colorado winter,
seemed determined to take them from him one by one.

His hand touched soft, cold skin and he froze, eyes
widening in surprise. It wasn't a cow at all. It was a woman. He
knelt beside her, searching for a pulse, his eyes locked on her
pale face. There were streaks of blood on her cheeks and her hair
was crusted with snow and ice.

She was exquisite. But not a woman. A woman-child.
And, unless he was badly mistaken, she certainly wasn't dead. He
wrenched his gaze away from her and glanced up into the blinding
fall of snow. One thing was certain, if he didn't get her to
shelter fast, neither one of them would be alive much longer.

Cara woke with a start. She was shivering
uncontrollably and something solid and warm was holding her
captive. She struggled against the bonds, not certain whether she
was trying to escape or to snuggle closer to the heat. Her head
felt as if it might split in two.

The voice was soft, fluid, and very male, its
resonance radiating through her. She relaxed, allowing herself to
settle into his embrace. Which in and of itself was unusual. He was
a stranger after all, and she hadn't the slightest idea how she'd
gotten here.

The Night Listener and Others by Chet Williamson
Sunburn by Laurence Shames
Wild Horse Spring by Lisa Williams Kline
Running for Her Life by Beverly Long
The Lady of the Storm - 2 by Kathryne Kennedy
Bloodlines: Everything That Glitters by Green, Myunique C.
Ride On by Stephen J. Martin
Fever by Tim Riley
Acting Out by Katy Grant
The Shameful State by Sony Labou Tansi