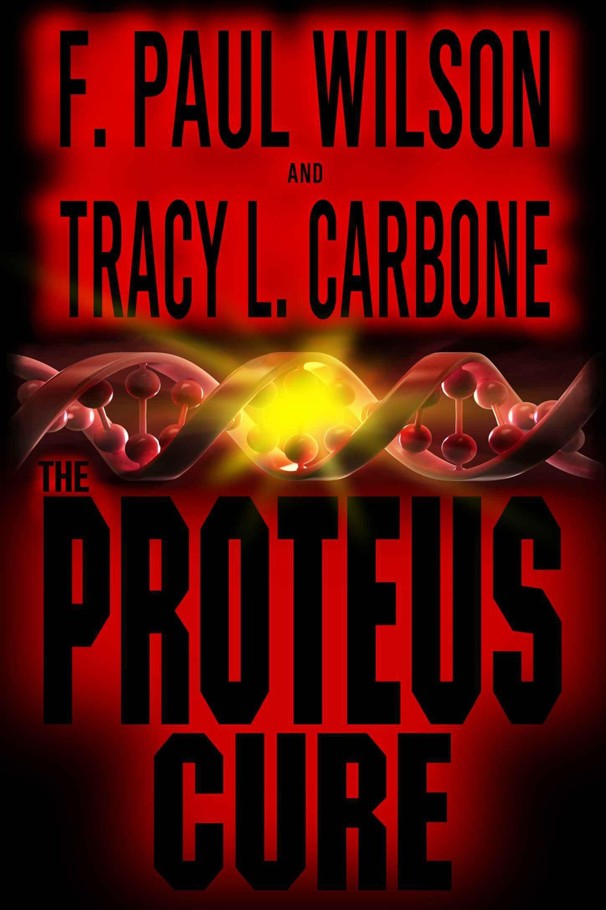 A while back, at a writer-reader conference, Tracy Carbone asked me about the scientific / medical feasibility of an idea she had for a medical thriller. As we discussed the biological aspects and how the idea would work into her novel, I suggested she turn her plot on its head and approach the story from the opposite direction. Many emails followed as we batted the story’s throughline back and forth, hammering it into shape. I became so involved (I found myself thinking about it more than my own work in progress) that I finally suggested we write it together.

The authors would like to offer special thanks to Dannielle Romeo for her sharp eye for the wayward word.

More rain. Would it ever stop?

Sheila chewed her lip as she maneuvered her 4Runner along the slick, twisting two-lane road from Salem, New Hampshire.

Christmas was only a few weeks away and she needed snow, white fluffy mounds of it, to breathe some spirit into her. Going holiday shopping hadn’t done a thing for her enthusiasm. Crowded stores. Wet streets.

She hit a pothole, and the impact bounced her car so hard she thought for sure she’d get a flat. Her coffee splashed up out of the lid and down the side of the cup. Great.

Peace on earth, goodwill toward men…

A patient dead in the past week—a freak accident, they said, but a convenient one. She hadn’t known her well, granted, but she’d had a face, a name …

If she could somehow excise the past week from her life, everything would be safe and sane again. She’d be her old workaholic self, the indefatigable Sheila Takamura, the ever-cheerful up-and-coming staff oncologist at Tethys Medical Center, going about her daily routine of curing the incurable in the clinical trial of miracle drug VG723.

But maybe it wasn’t a miracle.

But last week had happened, and what she’d experienced had tainted her relationship with Tethys, and with its headman, Bill Gilchrist.

Bill, the gorgeous, rich mentor and a co-owner of the hospital. The man who had fed her fantasies for years. Clive Owen without the accent. She shook her head at the thought of him now.

Bill Gilchrist had fallen from grace. God, how had she been so blind? He had walked on water. Could do no wrong. “Glittered when he walked,” or whatever that Richard Cory line was. Feet of clay was more like it.

Or maybe tongue of clay—discouraging her from investigating two bizarre patient anomalies.

Well she was
not
letting this go. One patient was dead and her evidence was gone, but the other was alive and kicking and demanding answers. Answers Sheila wanted as well.

She turned off the radio, leaving only the swish of the windshield wipers to distract her, and focused on her next step for diagnosing Tanesha and her strange—

Her rearview mirror brightened. Sheila glanced up and saw a car coming up fast behind her. Really stupid on this curvy road with only a metal guardrail between you and the rocky ravine below. Insane on a wet surface. Probably some teen. She remembered her attitude back in those days: immortal. Dek had felt that way too, and where was he now? Dead, leaving her a widow.

She eased up on the gas and edged to the right to allow him a little more room to get by.

She glanced at the darkness beyond the guardrail. Through the ages the river below had carved a deep pass between these hills. Scenic during the day—which explained all the high-ticket houses atop the far side—but a black pit at night.

As the headlights raced up behind her—and headlights were all she could see—she tightened her grip on the wheel and slowed even more. The near-blinding lights swerved around her rear fender and came up close beside her. Too close. She glanced over and saw a big Suburban, driven by someone shaped like a man.

Mother of God! He’d slowed to the point where he was pacing her, his front bumper a couple of feet ahead of hers. Her heart missed a beat, muscles tightened.

He passed her. Thank God. Just some nut in a hurry. Sheila took a few deep breaths, tried to lower her heart rate. Too much adrenaline.
You’re okay, Sheila, you’re okay.
He disappeared around the next bend.

The rhythm of the wipers gradually calmed her.

Her mind slowly drifted back to the VG723 trial. If she could only—

Out of the darkness two lights lit up her driver’s side window. She screamed before the impact knocked her hands off the steering wheel, before she knew what hit her. And screamed again as she was smashed on the side a second time. The 4Runner careened over the guardrail and seemed to hang in mid air forever before plunging toward the dark river below.

Sheila felt the car crash onto the hillside with a bone-bending jar that bounced the top of her head against the ceiling. The car tilted again and rolled onto the passenger side, then onto the roof, leaving her hanging upside down in her seatbelt for an instant before the rocky ground rammed against the driver’s side, slamming her head against the window, shattering it. Shards of safety glass showered around her. The car then did two more quarter rolls onto its passenger side before completing its slide to the edge of the river at the bottom of the ravine.

When finally it ground to a halt, Sheila’s body weight and gravity pulled her toward the passenger seat, but her seatbelt held her painfully in place. She hovered, battered and shaken, her heart thumping against her chest wall like a trapped, frightened animal as she gasped for breath.

Still puffing, she ran her hands over her body—a bloody nose but no blazing tenderness. No broken teeth or bones. She was alive and seemingly intact. But her head … it seemed to be spinning. Concussion, most likely.

Cold rain through the shattered window her splattered her face, reviving her. She was blessing the inventor of the seatbelt when the reality of what had just happened slammed into her.

No accident! The bastard had passed her and waited. Broadsided her. Tried to kill her.

Had to get out.

Sheila tried to brace herself on the steering wheel but it kept turning. Nothing to hold onto. She held her breath and pressed the release button on her seatbelt, anticipating the drop. She fell hard a couple of feet toward the passenger side of the car. Not too bad. Fighting a wave of nausea-tinged vertigo, she turned herself around and struggled upward until she could poke her head through the frame where her window had been. Steam rising from her hood wafted around her along with the odor of spilled gasoline.

She looked up toward the road for a sign that someone had seen her go over the edge and was dialing 9-1-1.

But all she saw was a big SUV parked by the guardrail … and a figure making its way down the slope. Not with the frantic pace of someone who’d witnessed an accident and wanted help. No, this looked like the slow, measured approach of someone who wanted to see if his efforts had been successful. She couldn’t make him out, his face a dark silhouette from the SUV lights behind him, but she sensed his steady purpose: If the crash hadn’t killed her, he’d do it.

But who was
he
? What enemies did she have? None really. Then reality struck her like a punch in the stomach.

He had warned her to stop asking questions, threatened to force her to take time off, a “mental leave of sorts” if she didn’t stop “obsessing about conspiracy theories.” Suggested she might be paranoid and might be well-served to seek professional help. But would he actually try to kill her? God, what if he would?

Sheila grabbed for her cell phone but couldn’t find it.

The smell of gas grew stronger. Had her fuel tank ruptured?

Panic spurred new strength into her, propelling her through the window frame. She crawled over the roof and staggered on rubber knees as her feet hit the ground on the far side of the car.

It struck her that the best camouflage or diversion or whatever would be a fire. It would attract attention from the houses atop the opposite slope. Her killer wouldn’t be able to wait around. He’d have to run before the police arrived.

But … she didn’t have a lighter. Damn! If only she hadn’t quit smoking!

A knot formed in her chest, making it harder to catch her breath. Only one thing to do …

Run. Worry about identifying the stalker later. Get to safety.

Keeping low, Sheila stepped off the bank into the freezing river. At least the river was narrow and shallow here. Her vision swam and her head felt like it was going to explode. As she neared the other side, she vomited and the swirling water carried it away.

The far bank was almost within reach. She’d planned to climb the slope beyond it but knew now that was impossible. She was just about spent.

How had her life come to this?

Unbidden, memories of the events of the past week began to wheel around her. She remembered when things had begun to go wrong.

Last week … she hadn’t realized it at the time, but that was when her life started turning sour …

The night suddenly lit up with a thunderous roar as her car exploded.

And then her world went black.

With Elise at the mall and Robbie immersed in Call of Duty, Bill had April all to himself. The five-year old was using his multicolored Post-It notes to make a big flower on the wall of his home office. He looked up from the pile of employee reviews he needed to sign and smiled at her. Such a sweet kid. A ball of sunshine.

His desk phone rang and he picked it up. Probably Elise.

“This is the switchboard. We have the Bradfield Police calling about Doctor Takamura.”

He straightened in the chair. Sheila?

“What did they say?”

“They want to speak to someone in charge, and so I—”

A voice identified itself as Sergeant Frayne, Bradfield PD and said,
“We had an accident in the ravine outside of town. It’s registered to a Sheila Ta-ka-mura—I think that’s how you say it. We noticed the car had a Tethys parking permit so we assume she’s one of your people.”

“Yes-yes. We have a Doctor Takamura here. Is she all right?”

“Well, we don’t know for sure, but it doesn’t look good.”

“There’s no sign of her. It appears the car exploded on impact but we can’t find her body. We feel she may have been blown into the river and swept downstream.”

Weakness swept over him. He all but lost his grip on the phone.

“We’re going to mount a search for her body but as I said, it doesn’t look good. Do you know how we can contact her next of kin?”

April tugged at his sleeve. “Daddy, are you okay?”

He’d forgotten she was here. Damn. No, he was not okay. But he nodded and listened to the officer.

Next of kin? He didn’t think Sheila had any.

“I—I don’t know of any. I’m a little too upset to think right now.”

“I’ll have my secretary look into it first thing tomorrow. I’ll have her call you then.”

Bill hung up and found April staring at him.

April looked worried. He wrapped his arms around her.

But it wasn’t. Not even close.

“Are you gonna be sick?” Her lip quivered. “You look sick.”

“A good friend of Daddy’s got hurt and I’m very sad about it.”