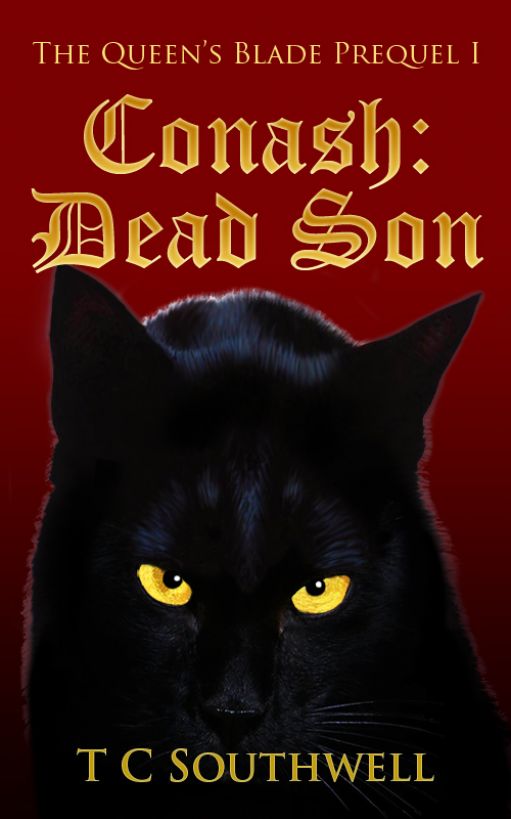 The Queen’s
Blade Prequel I

This e-book is
licensed for your personal enjoyment only. This e-book may not be
re-sold or given away to other people. If you would like to share
this book with another person, please purchase an additional copy
for each recipient. If you’re reading this book and did not
purchase it, or it was not purchased for your use only, then please
return to Smashwords.com and purchase your own copy. Thank you for
respecting the hard work of this author.

This book is
the first prequel of
The Queen’s Blade
series, so if you
have not read the rest of the series and come to know and love the
characters in it, this story will not be as enjoyable as it will be
if you have. Also, it is the first part of a two-part story, so it
is a good idea to ensure you can get the second part before you
finish this one.

Jarren gazed
down at the bloody infant the midwife had just handed him, his
heart heavy. The tiny corpse barely filled his big, rough hands.
The air was heavy with the scent of blood, and his wife's ashen,
sweaty face told a grim story of struggle and pain. The midwife,
Remal, glanced up from trying to staunch Misha's bleeding with
boiled cloths.

“Bury him,
Goodman Jarren,” she advised.

The goatherd
turned to gaze out of the window, where a waning Death Moon's skull
face glared down, an ill portent to any who were born under it.
Perhaps it was better that the tiny boy his wife had just birthed
in a river of blood had been born dead. A blizzard howled outside,
rattled the wooden shutters and buried the frozen land under deep
snow drifts. His son should not have been born for another three
tendays, by which time spring should have arrived. The chill crept
in through chinks in the windows and doors, cooling the air inside
despite the fire that roared in the grate in the lounge.

A guttering oil
lamp on the old coalwood bedside table lighted the cramped bedroom
of his modest house. Clay plastered the dry stone walls and reed
grass from the nearby lake thatched its roof. Faded, but clean
homespun curtains covered the two narrow windows, a worn woollen
rug softened the stone floor, and cheap ornaments and brick-a-brack
stood on a puffwood chest of drawers in the corner

Jarren looked
down at his stillborn son again. “Conash,” he whispered.

Driven by an
urge he did not understand, he shook the tiny infant, willing him
to live. He did not want to lose his wife and his new son on the
same night. If Misha died, at least his son must live. Jarren shook
the boy again, and he writhed, then drew in a short gasp and let
out a weak wail.

Remal glanced
around. “You fool. He'll not survive more than a few time-glasses.
He's too small and weak. He was born too soon.”

Jarren looked
at his wife as Remal sat back, wiped her brow and left a smear of
blood on it. “How is she?”

“I've stopped
the bleeding. Now it's up to Tinsharon.”

Jarren
approached the bed and knelt beside it to lay the tiny boy on his
wife's breast. Conash breathed in weak gasps, and the midwife made
a sound of disgust.

“You should
wrap him and bury him now, Goodman Jarren. Spare yourself the grief
of hoping that he'll survive. He won't.”

“She may live.
She may even be able to bear more children. The childbed was
blocking her womb. When the birthing started, it tore; that's why
there was so much blood. As soon as he was born, the bleeding
stopped. Misha almost died trying to bring him into this world
alive.”

Jarren stroked
the damp black hair from Misha's pale brow, gazing at her gentle
face. Conash's head bore a thin layer of inky hair, so he had
inherited his mother's, and perhaps her grey eyes too, like
Jarren's other children. Misha had yet to bear a child that looked
like her husband. He hoped she would give him more children, but if
she could not he would be content with three. Or two. The boy was
limp, but his fragile chest rose in shallow breaths. Jarren fetched
a warm, damp cloth to clean his tiny son. He resembled a doll with
translucent skin, Jarren thought.

Remal dug in
her bag and placed a bottle on the table. “Feed her this when she
wakes. It's a tonic to strengthen her blood. And give her plenty of
water. Don't let that boy feed, Jarren. Let him die. It'll be
kinder for him.”

Jarren looked
up and nodded. “Thank you, Midwife Remal.”

“I'll return in
a few days to see Misha and collect my fee. I don't expect to see
him here when I do.”

He looked down
at his son. “I expect not. But until he dies we'll love him. He
deserves it. He didn't ask to be brought into this world, or to
leave it again so quickly.”

After the door
had slammed behind her, Jarren kissed his son's brow. “You're going
to live, Conash.”

The infant
whimpered, and Jarren placed him in the cradle, then set about
removing the blood-soaked sheets.

Three days
later, Jarren stirred a pot of ryelen when someone banged on the
door. He glanced into the bedroom, where Misha rested. Although
still pale and exhausted, she had regained a little strength and
held the baby to her breast. The child had only started to suckle
the day before, and she fed him as often as possible. She lowered
her gaze to her son, her eyes filled with tenderness.

“You're both
soft in the head. Misha, you weaken yourself to feed him. He won't
live.”

Misha shook her
head. “That's up to Tinsharon.”

“What about
your other children?”

Misha glanced
at four-year-old Rykar and little Alenstra, who, at two years old,
was due to be weaned. “It does them no harm. It's time Alenstra was
weaned, in any case. We love all our children.”

Remal sighed
and turned to Pendrith. “That's the child I told you about.” She
glanced at Misha. “I brought Pendrith to do a cleansing, but now he
can do a reading too. Then you'll see.”

Jarren took the
bubbling pot off the stove. “According to you, he should already be
dead, but he's not.”

“Only because
you've coddled him, Goodman Jarren. Why would you want to raise a
sickly child, even if he survives?”

“Because he was
born to us.”

Pendrith
lighted incense sticks and waved them as he wandered around the
house, mumbling. Rykar sat on the overstuffed couch with his little
sister, who watched the seer with wide eyes, her thumb plugged into
her mouth. Remal went into the bedroom to sit beside Misha,
frowning at the baby.

“When did he
start suckling?”

“And how are
you feeling?”

“A little
stronger.” Misha looked down at her son. “I want him to live.”

They waited for
the seer to finish his cleansing, which entailed a great deal of
incense smoke and mumbling. He entered the bedroom and sat on the
chair that Jarren had placed beside the bed, gazing at the baby.
The seer laid his hand on the infant's head, then snatched it away,
rubbing it with a frown.

“What is it?”
Jarren demanded.

“There's a lot
of blood and death in this boy's future.”

“Perhaps. The
death may be his, although it's powerful.” Pendrith brushed his
fingers over the child's hair again. “A lot of power around him,
too.”

Jarren smiled.
“He'll be a mighty warrior then, and fight in the war, most
probably.”

Pendrith closed
his eyes. “This is an ill-omened child, Goodman Jarren. All the
portents of his birth are against him. I think Remal's right; you
waste your time trying to keep him alive.”

“Well, that's
up to us, isn't it?” Jarren gave Remal a silver coin. “Thank you
for the reading, Seer Pendrith.”

Remal headed
for the door, and Pendrith followed with a last glance at the baby.
When it closed behind them, Jarren sat beside his wife and gazed at
his youngest son, a gentle smile curving his lips.

“They're wrong
about him.

Conash dropped
a mushroom into his basket and looked around for more. The Deep
Forest's fecund humus yielded a wealth of plump pale mushrooms,
and, since he had a knack for finding them, it was always his job
to do so. Massive ironwood trees towered over him, and winding
animal paths laced the carpet of leaves between their rough reddish
trunks. The Deep Forest's silence enfolded him. Only an occasional
creak of wood or faint trill of distant birdsong broke it. Sunlight
filtered through the dense canopy of thin leaves to fleck the
ground with spots of gold, and drifting spores swirled in the warm
shafts. Clumps of bright green ferns broke the golden-brown
monotony, and gloom swallowed up the distance in a brooding
hush.

Becoming aware
that the light was fading and it was time to go home, the boy set
off, swinging the basket. He followed the trail that had led him
here, or at least, he thought he did. When he came across a fallen
tree he had not seen before, however, a chill went through him. He
was sure he had followed this path, but the animal trails all
looked similar, and now he did not know whether he was even heading
in the right direction. If not, he was in trouble. Becoming lost in
the Deep Forest was dangerous, possibly fatal. It was not a good
place to be after dark, when predators roamed it. At just six years
of age, he was too small to defend himself. The plump mushrooms had
tempted him too deep.

Conash sat on
the log and gazed around, wondering what he should do. His father
had told him time and again to stay close to the edge of the wood,
and he had disobeyed. The gloom grew deeper and more frightening by
the minute, and Conash chewed his lip. The canopy prevented any
glimpse of the sky, even if he knew how to navigate by the stars.
With the dawn, he would have an idea of which direction to take,
but now the sun was almost gone and the air chilly. If he was to
survive, he must find a safe place to spend the night. Father had
taught him much about forest lore, perhaps enough to see him
through. His eyes stung, and he blinked, refusing to cry. He was
not a baby.

Setting down
the basket, he examined the log, which had a hollow under it that
he could fit into if he cleared out the leaves. Conash dug them out
while the light faded, glancing around anxiously as night sounds
replaced the daytime birdcalls. An owl hooted and crickets chirred.
A distant howl drifted through the trees, making him shiver. When
he had made a hollow large enough, he crawled into it and drew his
coat around himself. If wolves found him, he was done for. His
acute hearing picked up the padding of soft paws on the forest
litter, and he peered into the darkness, filled with
trepidation.

Touch Me and Tango by Alicia Street, Roy Street
Mother of the Bride by Lynn Michaels
The Healing by Jonathan Odell
Catacomb by Madeleine Roux
Hopeless by Hoover, Colleen
Harris Channing by In Sarah's Shadow
The Barn on Half Moon Hill by Milly Johnson
Baby Experts 02 by Lullaby for Two
The Decameron by Giovanni Boccaccio
The Lost Night by Jayne Castle