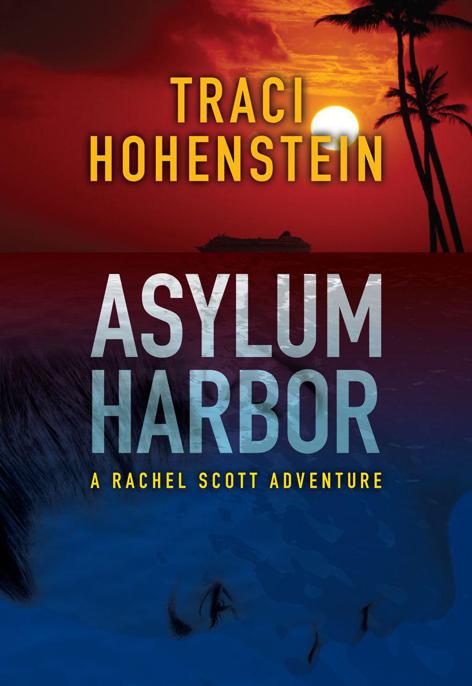 A special thanks to Sheila Pennington, who answered all my silly questions about the Bahamas, and Joyce Gleeson-Adamidis, who gave me insight into the cruise ship industry. (If I screwed up anything in regards to the Bahamas or cruises—it’s my own fault!)

And thanks to Cyndy Krapek, who let me name a character after her. Also to Jane Dystel and team, Kay Keppler, Jeroen ten Berge, and the Amazon team—Andy, Ashley, Jacque, Rory, Jessica—and all the others who worked to make this book the best it could possibly be.

And to my family, for their patience and support. Love you guys!

M
y name is Amber Knowles, and I’m one of the thousands of people who go missing every day. The day I disappeared was beautiful, with lots of sunshine and not a cloud in the sky. My parents had dropped me and my two best friends off at the Tampa dock. We planned to take a cruise on the
SeaStar
to the Bahamas. The trip was a high school graduation present from our parents and a chance to let loose before college.

At first, my parents didn’t want me to go. They were worried—with good cause, I suppose. You see, my dad is the governor of Florida, and he plans to announce his intention to run for president in the next election. He was concerned about sending his only daughter on a trip without any security. The last thing I wanted was to be followed around by men in black suits, sticking out like sore thumbs. Plus, we had two parents chaperoning the trip. So I fought desperately for that freedom, and my dad finally gave in.

Now, in hindsight, I kind of wish he had sent someone.

The first day of the cruise we set sail for Key West. My best friends, Nicole and Rowan, were just as excited as me to spend a couple of hours shopping and hitting the famous Duval Street. We even managed to score some margaritas at Sloppy Joes. However, the fun came to an end for me that night.

After a nice dinner, we decided to check out the ship’s newest nightclub, Aqua. As we approached the club’s door, I saw a cute guy in a white uniform with the
SeaStar
logo. He introduced himself as Josh McCain and told us he was a VIP host. I remembered seeing him earlier that day when we were lounging by the pool. Up close, he was even more gorgeous, with brilliant green eyes and a nice smile. He walked us to a private room and told us to let him know if we needed anything.

We hit the dance floor, but after about an hour, I started feeling sick to my stomach. I wasn’t sure if it was the alcohol or if I was seasick. Probably a little of both.

“I’m not feeling well,” I said as I laid my head down on the edge of the sofa in the VIP room. The velvet felt cool against my skin.

“We’ll get you some water,” Rowan said. My friends got up from the couch. “Stay right here.”

A few minutes later, Rowan and Nicole came back with Josh, who was carrying a bottle of water. “Rowan said you weren’t feeling well. I thought this might help,” he said sweetly, handing me the ice-cold bottle. “Do you want to go lie down? I can get the ship’s doctor for you.”

I took a sip and immediately felt my stomach rolling around.

“Yeah, you’re a little green. You want us to go back to the cabin with you?” Rowan offered.

“No, that’s okay,” I protested, covering my stomach with my hand.

“I can walk back with her. The commissary shop has some medicine for seasickness that I can get,” Josh said to my friends.

After a few minutes of encouraging me, I finally gave in and let Josh walk me back. The last thing I wanted to do was hurl in front of my friends and a cute guy I just met.

On the way back to my suite, Josh told me he was from California and had worked with the cruise ship for about eight months. I couldn’t help but wonder if he was flirting with me.

I told him I had just graduated from high school and would be attending Florida State University in the fall.

“I plan on becoming a veterinarian, and they have the best program in Florida,” I said. “Plus, it’s close to home, which my parents like.”

What I didn’t tell him was what it’s like being the daughter of a prominent governor and how it causes me all kinds of stress and problems. A lot of people at my high school were jealous of the life my family leads. If they only knew. It isn’t all glitz and glamour. We have skeletons in our closet just like any other family.

We finally got to my suite, which I could tell impressed him.

“Wow, the penthouse suite. You must be someone special,” he said.

The penthouse suite costs like eight thousand dollars for a four-day cruise. I wasn’t quite ready to let him know who I was, so I ignored that comment for a moment.

“I’m going to change. Be right back.”

I went into my room, pulled the pink sundress over my head, and threw it on the bed. A pair of shorts and T-shirt that I’d worn earlier that day were still clean. I put them on with a pair of flip-flops and walked back out to the living area. My stomach was still rolling around, and I now I had a doozy of a headache, too.

“I think I need to lie down.” I headed for the sofa and rested my head on one of the pillows.

“Why don’t you rest, and I’ll call the doctor for you.” Josh stood over me, staring at me with those beautiful green eyes.

“I don’t want all the trouble. Some Pepto or Tums would be nice.”

“We can manage that.” Josh got a towel from the wet bar and ran it under the water. “I had trouble with seasickness when I first started working.” He put the cool towel on my forehead. “What really helps is fresh air and looking out over the ocean.”

“Fresh air sounds good.” I followed him out onto the balcony and, stretching out on the chaise lounge, put the cool towel on my forehead. “I’m feeling better already.”

“Good. I’ll be back in a few minutes with something for your stomach.”

The night sky took my breath away. The thousands of stars combined with the twinkling lights from the cruise ship reminded me of Christmastime. I pulled my long blonde hair into a makeshift ponytail and slid off my pink flip-flops, taking a big breath of the salty air.

A strong gust of wind came out of nowhere and tossed a flip-flop over the railing. I stood up just in time to see the shoe get swallowed up in the foamy wake.
Dammit!
I’d just bought those shoes in Key West.
Tonight is not happening for me. Maybe I should go to bed and try again tomorrow.
But I wanted my stomach remedy. Josh had been gone about a half hour and he should have been back by now. When I heard the sliding glass door open behind me, I turned to see Josh standing there.

“Hey there. I thought you forgot me,” I said. He had a strange look on his face. “What’s wrong?”

Then someone shoved Josh onto the balcony. I didn’t see that person until Josh stumbled forward.

I stared in shock at the strange man. He looked familiar, but I was so scared that I couldn’t place him. He pointed a gun at Josh’s head.

“What are you doing? Are you crazy?” I screamed at this stranger.

“Move it,” the man said, pushing Josh farther out onto the balcony. The man was short, stocky, and bald, with a chipped front tooth.

“Leave her alone. She doesn’t know anything,” Josh said.

“Come on, Amber. Join the party.” The man motioned to me with the gun.

It took me a second to realize what the man said.
How does he know my name?

I stared at him, trying to figure out if I knew him. I pressed my back into the balcony railing, thinking there was no way I was going anywhere with this lunatic.

“Leave her out of this. She had nothing to do with it,” Josh pleaded.

“Not my problem. No witnesses.” The man raised the gun and pointed it toward me.

Now I really started to freak out. It’s silly now to think this, but I couldn’t help but wish my dad had sent security with me. I turned around and could just faintly make out what looked like the lights of a coastline. We must have been near our next stop in the Bahamas. I thought to myself,
If I stay, I die
.
If I jump, maybe I can make it to shore
. My hands shook as I climbed the railing and threw my leg over the side. The wind was picking up again, and loose strands of hair blew into my eyes. I looked down at the ten-story drop into the swirling water below.

“Amber, what are you doing?” Josh asked me as I sat on the railing, leaning toward the water. A look of panic flashed through his eyes.

“Look, we can work this out. I’ll tell you what you want to know if you just let her go inside,” Josh said.

“Don’t think so,
Josh
.” The man held the gun steady at me. His intense eyes locked with mine.

He adjusted his stance. The icy finger of fear gripped my heart as I looked into the water again. A loud shot rang out into the night, and then darkness rushed up to meet me.