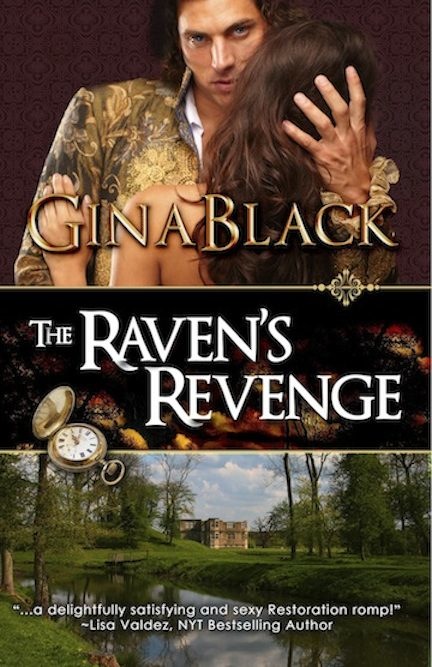 A Word about the Author

This is a work of fiction. Names, characters, places, and incidents are either the product of the author's imagination or are used fictitiously.

When Katherine Welles saves the life of a highwayman, she realizes he may be the only avenue of escape from a betrothal to her villainous neighbor. But traveling under the protection of a dashing outlaw--who won't ask directions--is anything but safe. Especially when his searing hot kisses awaken a yearning for something Katherine never knew she wanted.

Nicholas Montford, the exiled Earl of Ashton, returns to England determined to reclaim his family lands. As a highwayman called the Raven, he takes revenge upon the Puritans who thrived while his family suffered. But when he kidnaps heiress Katherine Welles, thoughts of revenge take second place to kissing her soft lips and teasing the mistrust from her eyes. Can he find redemption in the arms of the woman he plans to betray?

To Elise, who helped me start it; Bobbi and Jerri, who set me on the road; and Lisa, without whose steadfast encouragement I might never have finished it. And to Sara, Theo, and Taylor for being there every step of the way.

NICHOLAS EDWARD Henry Philip Montford, Seventh Earl of Ashton, struggled through the dense foliage, clutching his shirtsleeve to stanch the blood streaming down his left arm. His head throbbed. He’d looked back but a moment, to see if he’d lost his pursuers, and suffered a mighty whack from a low-hanging branch as a result. That was when he’d parted company with his horse, an indifferent beast rented from the inn, with no sense of loyalty to a somewhat incapacitated rider.

Now the pain, as relentless as a blacksmith’s hammer, helped keep away the fatigue. But not for much longer. Nicholas could feel his life force drain away with each heartbeat.

Without warning, his boot slipped on the bracken. He went down, bracing himself against the fall with both hands. Pure agony shot through his wounded arm. His head felt like it split in two. He groaned a deep feral sound, more animal than man.

Rolling onto his back, eyes clenched against the pain stabbing at his temples, Nicholas took a great breath of the cold night air. The ripe smell of decaying leaves filled his lungs. He opened his eyes to see the full globe of the moon shining down through the branches. The stars twinkled like old friends happy to see him after a long absence.

Sudden crashing in the underbrush alerted him to danger. Snorts and grunts announced a new enemy. Nicholas raised his aching head. From across the clearing, the eyes of a wild boar gleamed in the moonlight.

He repressed a chuckle. What irony it would be to come to his end gored by the tusks of a swine.

But he had not survived the seamy streets of Amsterdam, the slave markets in Algiers, and endless days and nights floating adrift on the stormy Mediterranean to die here. It was not his time. At least he hoped not. He had yet to honor the promise he’d made to his father.

Rising awkwardly, Nicholas reached inside his cloak and pulled the flintlock pistol from his waistband. The weapon felt cold and reassuring in his hand.

They faced each other, wounded man and wild beast, quiet and still in the moonlight. Then the creature looked away. For a moment, Nicholas thought it might leave, but it turned toward him and, with a loud snort, it charged.

Swearing and praying at the same time, Nicholas pulled the gun’s hammer from half to full cock. He aimed between the glittering eyes, adjusted to compensate for the pistol’s tendency to shoot to the right, and squeezed hard on the trigger.

The gun’s recoil threw him back. Pain throbbed through his head, echoing in his wounded arm. He struggled to remain standing. Sparks flashed brilliantly, then all went black. The loud explosion sealed his ears against sound. The foul stench of the powder invaded his nose and mouth, making it hard to breathe.

Had he hit the beast?

Nicholas strained against the night, trying to see through the murky air. With a pop, his ears cleared. All was quiet, save for the pounding of his heart and his own harsh breath. Finally, the darkness took shape.

Nicholas shivered. It wouldn’t be long before another predator discovered him. Weakened and one-armed, he could not reload. He would simply have to keep going.

Gritting his teeth, he stuffed the still-hot firearm into his waistband and set forth once again. For what seemed an eternity, he heard only the sounds of his own boots crunching the fallen leaves.

He pushed on until he could go no farther.

Fighting against his own weakness, he braced himself against a tree to keep upright. The hot flush of fever crept through bones that now ached as much as his head. Nicholas rubbed his brow to clear the grogginess. Perhaps he could reach Ashfield before he died. Then they could bury him beside his mother. He’d like that. More likely, he’d be strung from a gibbet as a lesson to others.

But they’d have to catch him first.

A grim smile tugged at his lips. He staggered forward with new determination.

Then up ahead he saw Witches’ Rock. Like a familiar scent packed away with clothes in an old trunk, a memory wafted through his muddled mind, and he remembered where safety lay. With sudden certainty, Nicholas knew it was not his fate to die this night. He had come home.

His steps took on new sureness as he skirted the large boulder. Another twenty feet or so brought him to a squat freestone structure. Pushing open the wooden door, he fell forward, collapsing onto the hard dirt floor.

“As you know, on your brother’s death, this fifteen-month past, you became heiress to this great estate.” Father’s words echoed through the high-ceilinged room like a death knell.

As the morning chill eased into her bones, Katherine Welles tucked a strand of hair into her white cap, preparing herself for her father’s usual lament.

Gray skies outside cast dim illumination through the tall mullioned windows behind her. Grandfather sat stiff-backed behind a great expanse of table, bare but for his open Geneva Bible. Standing beside him, her father puffed out his chest as he prepared to continue.

“In that one moment, the fortunes of our family changed. It seemed my plans had been for naught.” Gerald Welles shook his head. “I then steeled myself to make the best of the betrothal we had arranged for you with John Perkins, though it was no longer to our advantage. ’Twas your mother’s wish for you to marry him, yet her ill health prevented it.”

A wave of sadness washed over Katherine. “Yes, Father, I know this.”

“Do not interrupt me, daughter,” he barked.

Katherine’s jaw tightened. She ached to get back to work and away from Father’s offhand references to the loss of those she held dear, but there would be no hurrying him, not even on washday. Katherine bit the inside of her cheek to keep her expression blank and her thoughts to herself.

Gerald ambled around the table. “Now ’tis time to see you settled, with a husband to guide you and run this estate when I am gone.” He clasped his hands below his rounded belly. “When your mother departed this life, I wrote to John’s father. Robert apprised me of his desire to remove his family from England. The political climate—“

“Since that libertine Charles Stuart assumed the crown,” Grandfather Wilfred broke in, wagging an ominous forefinger, “it is no longer safe to worship.”

Gerald coughed and turned back to her. “The Perkins family will journey to Massachusetts Colony in the spring.”

“Robert Perkins is a fair man. Massachusetts Colony is a great distance, and there is much danger in the passage. As you are now my heir, he has offered to release you from our agreement.”

Katherine gripped her hands together behind her back to keep them from shaking as the hope, which had risen so suddenly, was dashed just as fast.

“It is now official. The papers arrived two days ago. We have set aside the prior arrangement.”

Katherine bowed her head in a submissive gesture that covered her agitation. Short nails bit into her palms. Father had signed the contract three years ago. She had thought it ironclad. A great foreboding hit her. She did not want to hear his next words.

“In keeping with your status as heiress,” Gerald rocked back on his heels, “we now seek a more favorable alliance.”

“To my gratification, our neighbor, Richard Finch, has offered to take you as wife. We concluded our negotiations last eve. You will say your espousals in a week.”

Hot bile rose in Katherine’s throat. Her head shot up. “It c-cannot be true.”

“And why is that, daughter?”

“I cannot marry him. I do not even like him.”

Gerald frowned. “That was precisely how your mother felt when we married, but it made no matter. She brought a good dowry, which I turned to my advantage by purchasing this fine property when Cromwell made the offer.” He made a gesture meant to encompass all of Ashfield. “The purpose of marriage is to form alliances, join bloodlines, unite properties.”

Grandfather spoke. “A daughter’s duty is to obey her father.”

Katherine was aware of her duties, as well as the usefulness of daughters. Yet, betrothed to John Perkins, she had felt safe from her father’s ambitions. She would have been content with John, a sweet boy, with a native kindness. She might have even grown to love him. She would have welcomed a life in the New World, a rugged new land with limitless possibilities.

“You cannot ask this of me, Father.”

“I am not asking.” His eyes, now flinty, mirrored those of her grandfather. “I am telling you.”

Katherine’s breath caught. Turning away to hide the alarm she could no longer mask, she dragged in a mouthful of air. Her thoughts cascaded in a frantic search for a protest that might have some influence. “There has not been a proper mourning period since my mother’s death. Nor since Sarah Finch’s passing.”

Ice Cold Kill by Dana Haynes
Bound to You by Bethany Kane
Bradbury, Ray - SSC 09 by The Small Assassin (v2.1)
Surprised by Love: A Contemporary Romance (The Armstrongs Book 4) by Gray, Jessica
Dancing Dragon by Nicola Claire
Within the Hollow Crown by Antoniazzi, Daniel
The Bluest Eye by Toni Morrison
The Willing by Moreau, JJ
The Family by Martina Cole
What He's Poised to Do: Stories by Ben Greenman