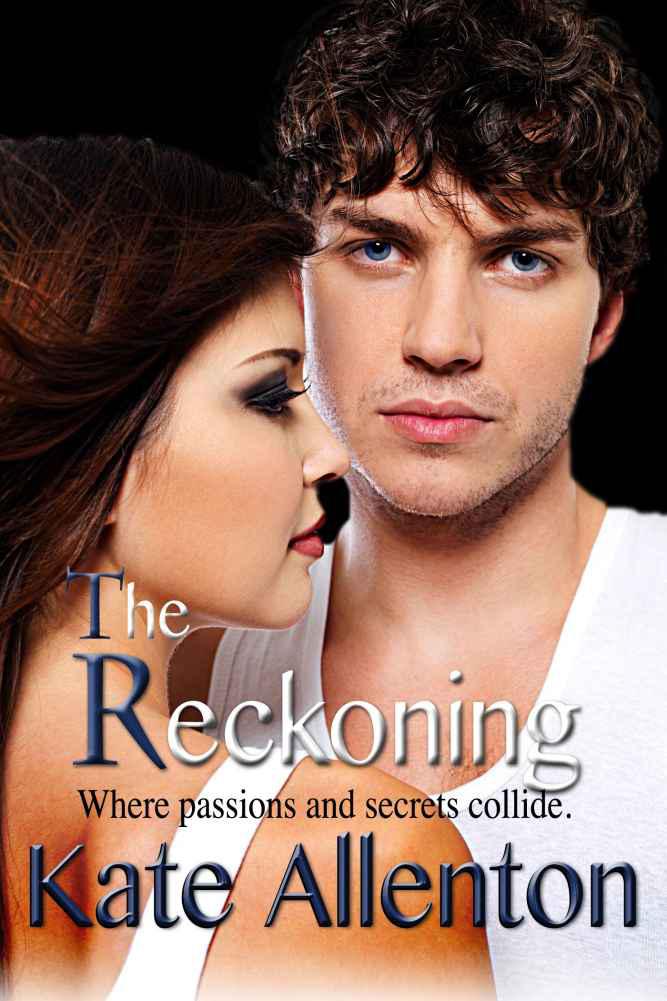 This ebook is licensed for your personal enjoyment only. This ebook may not be re-sold or given away to other people. If you would like to share this book with another person, please purchase an additional copy for each recipient. If you’re reading this book and did not purchase it, or it was not purchased for your use only, then please return to Amazon.com and purchase your own copy. Thank you for respecting the hard work of this author.

Discover other titles by Kate Allenton

This is dedicated to every reader who has emailed me wanting more.

I appreciate each of you
,
more than words can say.

Helen Menzies, your strength and spirit inspires us all.

Leann Goodson,
thank you for being the
loving daughter
and mother you turned out to be. Because of your example,
your own daughters turned out stro
ng, independent and caring women that remind me of the Bennett women in my books
.

Natalie Blackletter, without whom I’d have missed out on so much. Your updates have kept me connected to a missing piece of my life. Thank you for taking the time to include me.

Thomas, Taylor, Sydney, Hannah, Zach, Cody and Zoey, never give up on your dreams or let fear stand in your way.

“I won’t do it.” Mike Bennett crossed his arms over his chest and narrowed his eyes at his sister Claire. “And you can’t make me.”

Claire Bennett, the newly engaged sister of the Bennett Clan, glanced over at her younger sister Abby and her husband, Sam, and winked.

This can’t be good.
Claire took a step toward Mike and laced her arm through his. “We understand, big brother, how a little slip of a woman like Dr. Elizabeth Lister could scare you.” Claire closed her eyes, leaning her head against his arm. “I’ll just send Thompson or Briggs over to do it instead of you. Either way, it’s getting done, so I guess it doesn’t matter who does it.”

Mike had seen his sister play this game with him numerous times before. He hadn’t like it then, and he damn sure didn’t like it now. The only thing about her request that was different today was the place it occurred, and today it seemed that Emma’s café worked just fine for her needs. Emma’s Café was a place to unwind, sit back, and relax on usual days. There was nothing usual about today. Mike glanced around at the patrons sitting nearby. None of them were aware of the predicament that his sister, Claire was trying to put him in now. At least he’d already had his first cup of coffee and a clear head before she’d started in. Claire had an agenda, and he wasn’t going to play a part in her matchmaking.

FBI Agent Rick Thompson seemed interested enough. His dark haired, blue-eyed friend with a pleasant personality would have been a better fit for the doctor. Although Mike just couldn’t seem bring himself to be okay with the prospect. No matter how right they would have seemed together, deep down Mike knew she was meant to be with him. As different as each of them were, none of them stood a chance when Claire was on a mission. The voracious blonde may have been a short
five foot six inches
tall, but she knew how to get her way, more so than his other two sisters. Claire was born with charm and grace. There wasn’t anything she couldn’t do if she put her mind to it.

Claire looked up at him with her blue eyes and batted her long black lashes. “You know you’re right. She might say no if I send you to invite her.”

The grin stretched across her face told him otherwise. Abby, the most outspoken and straight forward, of his sisters slapped him upside the back of the head. “Chicken.”

Mike reached up and rubbed his head as he turned his scowl on Abby. “I. Am. Not. A. Chicken.”

“Then do it. Go to the hospital and invite her to dinner like Claire wants you to do. After saving all of our lives with her medical expertise, you should have known we’d take her under our wing like she’s a part of this family.”

Mike watched as Butch Edwards, Claire’s fiancé and his longtime friend, walked over from the coffee counter and put his arm around Claire. He leaned down and kissed her on the cheek. “What did he say, angel?”

Claire shook her head and pushed out her bottom red painted lip. Mike knew he didn’t stand a chance of getting Butch on his side. He was a lost cause where Claire was concerned and would do anything to make her happy, just like the rest of his new brothers-in-law.

Butch glanced up at Mike, raised his brow in amused contempt, and grinned. “I didn’t think he would.” Butch lifted the coffee cup to his lips and sipped the steaming brew. “Don’t worry, angel, I’ll do it. There’s no way she can turn down my charms, and just to be sure, I’ll take Thompson with me.”

“Like hell you will.” The thought of another man putting the moves on the little doctor infuriated him. A flicker of apprehension coursed through his body from the thought. Mike crossed his arms over his chest defiantly and growled. “Damn it, Claire, I’ll do it.”

Dr. Elizabeth Lister scurried through the dank parking garage of the hospital. The musky enclosure was a place she hated to walk alone. The thought of the columns hiding unknown surprises always made her apprehensive; today was no different. Glass crunched beneath her tennis shoes making her pause. She craned her head back and looked up at the broken light, which normally would have illuminated the cold dark space. Her heart skipped a beat as she glanced around, though searching for what she wasn’t sure. Her eyes tried to adjust as she scanned for shadows of threats that might be lurking nearby. Her pulse quickened along with her step. This wouldn’t have been the first time that she’d gotten herself in a bad predicament, and as long as that asshole was still alive, it wouldn’t be the last. The entrance to the hospital which would lead her to the safety the lit building offered was just in view as she quickened her pace. A sinister laugh echoed off the walls of the overcrowded space, halting her from crossing the threshold into the warm welcoming embrace of the hospital. She spun on her heels, searching for what she couldn’t see—any hint of the man behind the laugh, a very real threat she could feel down into her bones.
Not again
. A shiver ran down her spine, making her hands tremble as she reached for the handle to pull the door open.

“You can run, but you can’t hide,” a deep voice called out in the darkness.

“Watch me,” she whispered, looking over her shoulder as she hurried through the opening to safety.

Her breath escaped her when she ran into what felt like a solid brick wall. Steel arms encased her as she swung her face around and lifted her fist to protect herself. Her rapid heartbeat shot adrenaline through her veins.
Elizabeth
looked up into the crystal blue eyes of the one man who caused a threat of a completely different kind. Mike Bennett.

Elizabeth
glanced back over her shoulder into the darkness and shuttered. She didn’t know which threat was worse. The menacing voice or being held in the arms of the one man that threatened her sanity in an entirely different way. It was a toss up.
Elizabeth
turned back to her unexpected savior. “I just don’t care for dark spaces. There seem to be a few more parking lot lights out than normal.”
Elizabeth
squirmed
in his embrace. Mike didn’t relinquish his hold all together, just loosened it. Her body was pressed tight to his. The look in his eyes held a promise neither one would ever act on.

She wouldn’t admit, to this man or any other residence of their little town of
Southall
, what she was really afraid of. She’d left it in the past along with her bad memories. She was thankful that no one was in the hall to witness the apprehension that she was feeling inside.

Mike cleared his throat, somewhat releasing her from his grasp. He threw his arm around her petite shoulder and guided her down the long hall. His eyes gleamed as he looked down at her. “Don’t worry, Doc. I won’t let the boogey man get you.”

Elizabeth
jabbed her elbow into his side and squirmed from his embrace. “Oh please, go feed that crap to some other defenseless woman. I’ve been taking care of myself for a long time, Detective.”

Mike held up his hands in surrender, palms out, with a grin stretched across his face. She’d
seen
that same cocky grin for over two years, sending her mind and body into a tailspin. His presence alone annoyed her while creating a desire, she hadn’t felt in a long time, and she didn’t like it one bit.

“Sorry for mistaking you as a damsel in distress.” He closed his eyes and let out a breath. When his eyes opened again, she saw mischief in his gaze and a grin on his lips. He reached for her hand, lifting it to his lips; he placed a light kiss on her knuckles. A move she’d seen his friends do, but never him. No this man usually took what he wanted, making her curious about his current agenda. “I didn’t come here to fight with you.”

Elizabeth
felt the blush rise to her cheeks. Regardless of the reason he showed up, she really was glad he’d happened along when he did. There’d been no mistaking the voice that had called to her from the dark, the same voice she’d successfully hidden from for the last two years. He was the one man she’d avoided like the plague and she had desperately hoped he had moved on to greener pastures or had been locked up; either way would have suited her. She’d taken her father up on his offer to help her disappear, but it seemed that nowhere was out of the stalker’s reach.

Elizabeth
pulled her hand from Mike’s grasp, straightened her shoulders, and narrowed her eyes at the only man that could make her blood pressure rise and her heart skip a beat at the same time. “Then why are you here?”

Mike’s predatory gaze ran the length of her body and back up, but he didn’t answer. She knew nothing would come of his visual perusal, it never did. The look he gave her was one she’d seen numerous times at Claire’s fundraisers. A look
that promised more pleasure than
she could bear. A promise neither one of them was willing to make.

Smothering a groan, she sidestepped him and left him standing in the hallway. “I don’t have time for games, Detective.”

Firebird by Michael Asher
The Improbable Adventures of Scar and Potbelly: Ice Terraces of Crystal Crag by Brian S. Pratt
En Silencio by Frank Schätzing
Stewards of the Flame by Engdahl, Sylvia
Of Thee I Sing: A Letter to My Daughters by Barack Obama
The Rabid by Ami Urban
Pinch of Naughty by Sivad, Gem
Lovely by Strider, Jez
My Mistake by Daniel Menaker
Holiday for Two (a duet of Christmas novellas) by Maggie Robinson, Elyssa Patrick