Tags: #A Medieval Romance in the Age of Faith series by Tamara Leigh 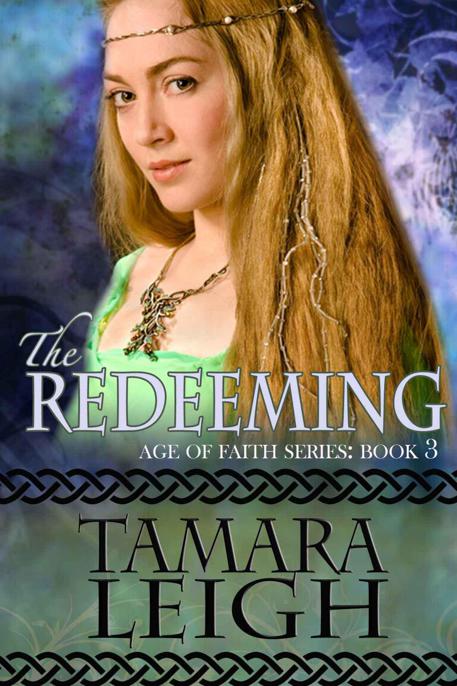 Book Three in the Age of Faith series

The Unveiling
and
The Yielding,
the first books in the Age of Faith series, introduced readers to the formidable Wulfrith family during Duke Henry’s battle for England’s throne and his succession. Now that Henry wears the crown, he is more determined than ever to bring the Wulfriths to heel.

IN THE EYES OF THE CHURCH AND MEN, HERS IS NO SMALL SIN

Lady Gaenor Wulfrith is a woman scorned. And King Henry’s pawn. After three broken betrothals, she is ordered to wed her family’s enemy, a man she has never met and has good reason to fear. Faced with the prospect of an abusive marriage that will surely turn worse when her sin is revealed, she flees her family’s home with the aid of a knight—a man who could prove her ruin.

Christian Lavonne, the only remaining heir to the barony of Abingdale, has thrown off his monk’s robes—and God—to administer his lands. Determined to end the devastation wrought by his family’s feud with the Wulfriths, he agrees to marry his enemy’s sister, a woman no man seems to want. When he learns she has fled with a knight who has broken fealty with the Wulfriths, he pursues her, knowing that when they meet his own sin will be revealed and he will be as much in need of redemption as the woman who may carry another man’s child.

Age of Faith: A Medieval Romance Series
The Unveiling:
Book One, August 2012:
Amazon

This novel is a work of fiction. Names, characters, places, incidents, and dialogues are either the product of the author’s imagination or are used fictitiously. Any resemblance to actual events, locales, organizations, or persons, living or dead, is entirely coincidental and beyond the intent of the author.

All rights reserved. This book is a copyrighted work and no part of it may be reproduced, stored, or transmitted in any form or by any means (electronic, mechanical, photographic, audio recording, or any information storage and retrieval system) without permission in writing from the author. The scanning, uploading, and distribution of this book via the Internet or by any other means without the author’s permission is illegal and punishable by law. Thank you for supporting authors’ rights by purchasing only authorized editions.

Perspiration running into his eyes, the blood of a half dozen wounds seeping through the weave of his tunic, Christian Lavonne reminded himself of what was required to best his opponent.

Drawing back his sword, he eyed the knight’s neck that glistened with the efforts of the past half hour.

Lunging forward, he shifted his grip on the hilt.

Smelling his opponent’s bloodlust, he arced the blade toward the exposed flesh that would assure victory.

Putting from him all he had been taught of mercy and forgiveness, he slashed the blade down. And met steel.

“Surely you can do better!” the knight spat.

Christian growled, swept his blade up off the other man’s, and swung again—only to yield up the blood of his forearm.

Christian knew it was anger the other man sought. And he would have it. Heart pounding as if upon the stoutest door, he swung again. Missed.
Again!
Missed.
Again!
And finally set his blade to the knight’s lower thigh. However, he was allowed but a moment’s satisfaction before his opponent leapt at him.

Christian jumped back from the thirsty blade and came up against the fence. If not that the thrust of his weight cracked the wood, the knight would have had what he sought—blood for blood.

With a shout, Christian plummeted backward and landed hard on the splintered rails.

“You are had, Lavonne.” His opponent settled the crimson tip of his blade to the great vein in Christian’s neck. “Beg for mercy.”

Throat raw with exertion, Christian flexed his hand on his sword hilt. “Never!”

Fire leapt in the man’s grey-green gaze and the stench of death rose to Christian’s nostrils, only to retreat on the knight’s great sigh.

“Well, then”—he turned his blade down, set its tip to the ground, and leaned on the hilt—“at least humor me with a recitation of the lesson that applies to the dire situation in which you find yourself.”

Grinding his teeth, Christian rolled to the side and gained his feet. “That would be lesson one.”

“One?” With a sweep of his forearm, the knight brushed back the damp brown hair that clung to his brow. “Pray, enlighten me as to how that applies to your sound defeat.”

Christian glared. “I do not refer to
your
lesson, Sir Abel, but mine—one in which I fear you are in need of instruction.”

Sir Abel’s gaze narrowed, but just when it seemed the tension might once more see them at swords, he bowed low. “Most esteemed
Baron
Lavonne, pray honor this lowly knight by reciting the appropriate lesson.” He straightened. “I humbly await your good grace.”

Insufferable! And only a sharp reminder of the reason he was at Wulfen Castle made it possible for Christian to give the knight what he asked. “Lesson three, neglect not one’s back.”

Christian looked from the bloodied and rent fabric behind which the knight’s heart beat to the torn fabric centered on his bowels. “Were we not merely practicing at swords, Sir Abel, twice I would have done more than score your flesh. Indeed, your very life would be forfeit.”

“Had you a sword arm.” The knight raised his blade and pointed at the bloodied tear in Christian’s sleeve.

“Which would have been entirely possible with a leg cut out from beneath you.” Christian jutted his chin at where the fabric was split above the knight’s knee.

And so they might continue until every crimson tear was accounted for, as they had done each day these past three.

Though when they had first faced one another on the training field a month ago and Sir Abel’s sword skill had made Christian’s appear woefully inadequate, Christian had improved greatly. Despite the knight’s disdain for his student, he was an excellent instructor and, given more time, it was possible Christian would attain a level of mastery similar to that enjoyed by his warrior-bred opponent who would soon be his unwilling brother-in-law. And that possibility had to be as surprising to Sir Abel as it was to Christian who had not only been born to the Church but had attained tonsure and monk’s robes before gaining an inheritance of which he had only ever dreamed. Unfortunately, the cost of the coveted inheritance had been the death of his older brother, something for which he had yet to forgive himself.

“The lesson is done.” Sir Abel thrust his sword into its scabbard and pivoted.

Christian glanced at the sun that had yet to touch the treetops of the distant wood. “Done?”

As if he did not hear the dissension in his student’s voice, Sir Abel continued toward the walls of Wulfen Castle.

“Methinks ‘tis
I
who unnerves
you
, Sir Abel!”

The knight swung around.

“Flatter yourself if it so pleases you, Lavonne,” Sir Abel once more dropped Christian’s title. “As for me, I shall be content in knowing that, as long as mastery of the sword eludes you, I am in no danger of forfeiting my life.”

Why he felt impelled to argue with the insufferable man, Christian did not understand, especially as their mutual animosity had lessened considerably since his arrival at Wulfen. But before he could advance the argument, Sir Abel said, “Do you wish to know the reason you have yet to truly master the sword, Baron?” With half a dozen strides, he retraced his path across the parched grass and halted before Christian. “Regardless of how angered you become when we meet at swords, regardless of how many times I mark your flesh, you cannot wholly commit to the taking of life.”