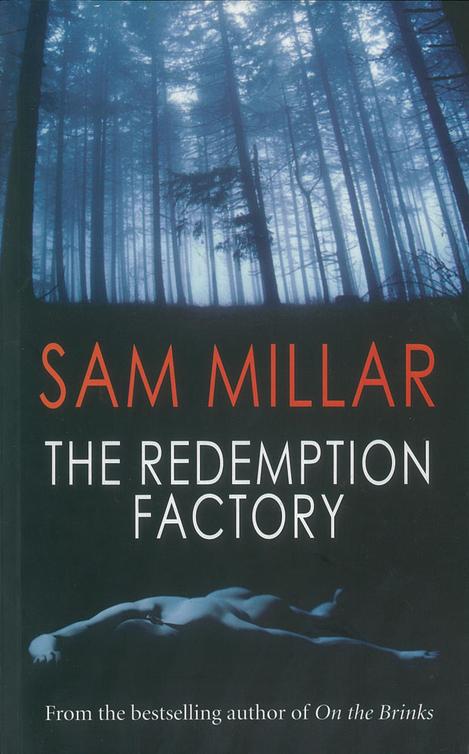 I dedicate
The Redemption Factory
to Brian, Liz and the “boys”, Jamsey, Ruari and Pearce.
A great family, and even greater friends

“From the one crime, recognise them all as culprits.”

“When a man is doing something he is ashamed of, he always declares that it is his duty.”

T
HE OLD COTTAGE
resembled a great boat that had barely cheated the storm. An outsider would laugh at its status, especially if told it were now a prison. But this was as much a prison of the mind as of the body: a psychological conundrum that told the sole prisoner lingering there that if he attempted to escape it would prove his guilt – if, that is, his former comrades hadn’t already determined it.

The tide had left the shore and the smell drifting into the cottage was strong, like bleach mingling with burnt salt. It entered through the torn structure of the cottage, making its presence felt uninvitingly. There were other smells inside the confines of the cottage; of dried sweat, excrement and urine challenging the uninvited smell, competing for second place. Only one odour reigned supreme, gaining in strength as time elapsed: the copper odour of fear …

The prisoner was naked, covered only in shadows, dirt and angry purple welts. His wrists were purple stigmata caused by the ‘strappado’ technique – a torture favoured by South American dictators in which a prisoner is left suspended from an overhanging with handcuffs until they slice deeply into the wrists.

The floorboards where he rested, rose and dipped in an irregular wave, de-crucified by time and wear. A decapitated statue lay languishing in a corner, mottled with age and dung. Webs of silky dust covered a village of cigarette butts and lips of blue-moulded bread crusts.

Cold bit at him, right down to his marrow, making him shake, making him wonder if this was what they were trying to do, freeze him to death?

Abruptly, his thoughts were interrupted by the sound of feet on shells. The sound had a thickness to it, muffled, and he knew it was his captors with their wet, sand-covered boots.

The door squeaked open and a sliver of light bleached his eyes, stinging them wet. He could feel the dampness of his bones being touched by the light, a little tongue licking at his skin.

“Eat,” said a gruff voice and he felt a plate touch his exposed feet.

The meagre meals had come intermittently, disorientating, consisting of the same grey and brown greasy matter, making it impossible to distinguish between breakfast and supper. This was deliberate: no concept of time turned hours to days, days to weeks …

Only the ugly stubble on his face acted as a calendar, keeping him semi-sane.

Ask them
, said the voice in his head.
Ask them
.

He despised the tormenting voice. He simply wanted to be left alone. Had he not been tortured enough?

“Can you tell me what’s happening? What the decision is?” He didn’t recognise the raw croak, the Judas sound that revealed his desperation.

The captors, their faces concealed behind masks, ignored the questions, allowing the silence to become heavier, more poignant.

Silence. Of course
, thought the prisoner, and he almost smiled. He knew, from experience, that a perfect measure of silence had the potent power to be as ruthless and as terrifying as the actuality. It instilled fear, but so subtle you hardly realised it, until it was too late, touching you right on the shoulder.

One of the captors housed a shotgun on the crank of his elbow, cradling it affectionately like a sleeping child. The prisoner remembered the first time he saw the ugly weapon speckled with tiny freckles of rust that teased out the metal into an uneven surface. Wire wool attached itself to the gaping entrance of the barrel and it reassured him, the gun’s condition. Neglect meant disuse. It was there to scare, subdue. Nothing else.

Only when he realised that it was neither rust nor wire, but blood and hair did the full horror of his situation sink in.

“You should be resting,” said one of the captors, finally breaking the silence.

The balance of words sounded innocuous, almost caring. But the prisoner knew they were slippery and evil, like a snail captured in the sun.

The door closed, chasing out the light. He listened to the footsteps fading, hoping never to hear them again, knowing he would. Soon …

The morning moved on, though in the prisoner’s head he found it impossible to distinguish.

He could hear the dense sound of gulls and the muffled sound of a car, thin in the background. It was raining outside and he listened intently to the fierceness of the rain and tried to picture its needles of porcupine quills battering the sandy ground.

It was music, an oratorical salvation sent to save him, lift his spirits and it made him wonder if, perhaps, God did exist, after all.

But the rain and music faded just as the boots treaded their way towards the door, their silent noise lurching his stomach.

The fear that had slipped a few hours ago, returned, thicker, resting on his chest, affecting his breathing. There was a taste in his mouth, a distinct taste of watered metal, like a dentist drill. Only when he spat it out did he realise he was bleeding.

Good old reliable ulcer
, he thought with bitterness.
I was wondering when you would show your ugly head
…

The aroma of bacon and eggs ghosted its way into the room. It was the most beautiful smell he had ever smelt and his belly growled with anticipation. But quickly the voices came back to torment.
A good meal? You know what that means
…

A captor placed the food on the floor, before backing away, into the dark. The other one – the one normally carrying the ugly shotgun – remained, watching. The shotgun was gone, replaced by a revolver.

“Why are you doing this to me? What have I done?” asked the prisoner.

Both captors remained silent, unmoving in the fading light, like foxes hiding in the dark, shrewd and calculating.

“At least allow me to look you in the eye, see your faces.” Anger was building in the naked man, an emotional release. It felt good to be human again, to hear his real voice, not some cardboard echo of it. If they wanted him to grovel, cry, they would be disappointed. Bitterly so. “Are you so ashamed of what you’re about to do that you can’t look me in the eyes?”

For the first time that evening, one of the captors spoke, his voice slightly muffled.

“You’re the one who should be ashamed. Not us. You betrayed us, our ideals – everything we fought and died for, by judiciously passing information to the enemy.

I hope it was worth it, all the money?”

“That’s a lie! I never betrayed anyone in my life. I swear on my family’s –”

“Save your swearing. It’ll do you no good – not with us. We’ve listened to your taped confession and the evidence against you. It was compelling. You set-up three of our men to be ambushed and murdered.
They
weren’t permitted to swear on family lives. Why should
you?
Now, suddenly faced with justice, you recant?”

“Look at me! Look at my body, humiliated, covered in cigarette burns, my wrists torn and shattered. Even if I said I betrayed anyone, I was tortured into it. Those weren’t my words on the tape. They were the screams of a man being tortured, a wounded animal screaming for mercy. Admit it, wouldn’t you have said the same lies if you were tortured?
Sleep deprivation for days on end? And don’t you find it a little perverse that we utilise the same torture methods we quickly condemn our enemies for? Such fucking hypocrites!”

“Eat your meal,” said the captor, ignoring the questions.

“You eat it,” taunted the prisoner. “Go on, prove you believe what they said about me. Eat with a good conscience. Let me see you swallow it, just like you’re swallowing the lies.”

The captor walked to the back of the room and looked out the window. He seemed to be studying the incoming waves, their slow movement of formless curls.

“Go on,” goaded the prisoner, encouraged by his captor’s silence. “Eat, drink and be merry with murder. Hopefully, the taste will always remind you of me …”

One of the captors glanced at his watch. “You’ve less than 15 minutes. You should be making peace with God.”

“God? Ha! Fuck all the gods – and fuck you, too! Remove your mask, you spineless bastards. Petrified I might come back and haunt you if I see your cowardly faces? Ha! That’s it, isn’t it, you pieces of shit?”

The captors walked towards the prisoner, slowly removing his mask, allowing the feeble light to expose his features.

“Take a good long look. Satisfy yourself, because this is the last face you will ever see again on this earth …”

It had been almost a week since the captor uttered those prophetic words, but as he sat and listened to the tape again, his belief in the man’s guilt was no longer resolute. Truth be told, his belief in a few things had come under scrutiny lately, creating a residual scepticism totally alien before now. He was beginning to believe things he knew weren’t healthy to believe.

He had listened to numerous taped confessions before,
of other traitors and informants begging for mercy, asking for forgiveness for their dirty deeds; but there was something in this dead man’s voice, echoing eerily back from the tape’s grave, that began to gnaw annoyingly in his ear.

No. A million times no. I did not – arghhhhhhhhhhhhh
…
bastards!

Silence. A few seconds of silence. The captor knew that those few seconds could be days in real time; time to soften the prisoner up, get him to say what they wanted to hear: ventriloquism in the extreme …

He clicked the tape off, pondering his next – if any – move. It was risky, having a copy of the original tape. Doctored copies had been make specifically for the ears of certain journalist and media outlets. They would hear the man confessing his sins, and how professional his interrogators had been. The interrogators’ voices would be calm, human and almost sympathetic. The prisoner’s voice would sound shaky, hesitant; a man avoiding the truth with a million lies in his head, his words stumbling like blocks of wood from his lying mouth.

Of course, very few ever got to hear the official tape, the one with the screams and denials. This would be kept for future interrogators, learning new methods, deciding what worked, what didn’t.

No. The sanitised version was for public consumption; the darker, more telling tape would be archived for the selected few, for the hierarchy.

It should have been destroyed, by now. He had been foolish in keeping it – if only for a few days; if only to ease his conscience …

From a crumbled cigarette box, he produced a cig and placed it in his mouth. The unlit tobacco tasted tired, putrid as the flame engulfed it. Everything seemed to have the same decaying taste, of late. He studied the lighter’s flame, then reached for the tape, bringing the two closer. He watched as the quivering flame from the lighter transformed into a tongue. He waited for it to speak …

The Presence of Grace (Love and Loss #2) by Anie Michaels
Secret Words (Secret Dreams Contemporary Romance 1) by Charles, Miranda P.
Lyonesse II - The Green Pear and Madouc by Jack Vance
The Greatest Show on Earth by Dawkins, Richard
Blood To Blood by Ifè Oshun
Raspberry Crush by Jill Winters
The Girl With All The Gifts by M. R. Carey
Eyes of the Soul by Rene Folsom
Dead in the Rose City: A Dean Drake Mystery by Flowers, R. Barri
Kid Comes Back by John R. Tunis