Read The Reign of Wizardry Online

The Reign of Wizardry 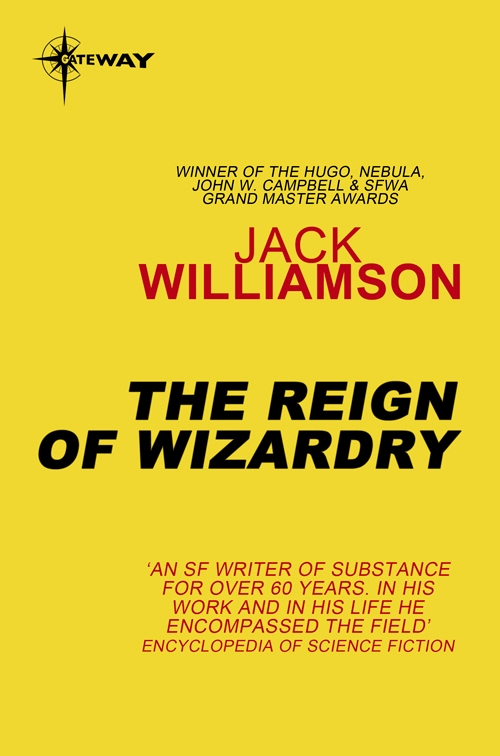 THE REIGN OF WIZARDRY

In the last years of the twentieth century (as Wells might have put it), Gollancz, Britain’s oldest and most distinguished science fiction imprint, created the SF and Fantasy Masterworks series. Dedicated to re-publishing the English language’s finest works of SF and Fantasy, most of which were languishing out of print at the time, they were – and remain
– landmark lists, consummately fulfilling the original mission statement:

Now, as we move inexorably into the twenty-first century, we are delighted
to be widening our remit even more. The realities of commercial publishing are such that vast troves of classic SF & Fantasy are almost certainly destined never again to see print. Until very recently, this meant that anyone interested in reading any of these books would have been confined to scouring second-hand bookshops. The advent of digital publishing has changed that paradigm for ever.

Welcome to the new home of Science Fiction & Fantasy. Welcome to the
most comprehensive electronic library of classic SFF titles ever assembled.

O
NCE THERE
was an island empire. Its fleets ruled the seas for a thousand years. Its wealth and splendor dazzled all the world. Then it was destroyed—cataclysmically!

Its fall still presents a mystery. For it was cut off abruptly, in the full tide of power. The fleets that had guarded its rich commerce and its unwalled cities were suddenly no more. Its capital city, where men had dwelt
for ten thousand years, was looted and burned and leveled by earthquake shock. Its people were scattered, and presently lost even the memory of their departed greatness.

The history of that empire’s splendor and its passing became a legend. Generations of retelling confused the details. Men came to call that lost world Atlantis, and at last began to doubt that it had ever been.

But the account
of Atlantis that Plato heard from the Egyptian priests—in almost every detail save the vague location beyond the Pillars of Hercules, and the complete submersion of the land itself—fits what is now known of Minoan Crete.

The conquerors, also, told their own story of what happened. Minos the god-king, the monstrous Minotaur of the Labyrinth, the artificer Daedalus, fair-tressed Ariadne and the
victorious Greek hero, all became the figures of a splendid myth.

But merely a myth—until, a hundred years ago, a poor child named Heinrich Schlieman was given a storybook of Homeric Greece. He saw a picture of the walls of Troy, and said that such walls could not have been obliterated, even in three thousand years.

Schlieman ignored the derision of scholars. Beginning life as an ill-paid grocer’s
clerk, he educated himself, made a fortune, and at last realized his splendid, stubborn dream—he excavated the mound at Hissarlik, and found not one Troy, but nine!

The forgotten gates of a magnificent pre-Homeric world were thus thrown open to knowledge. Sir Arthur Evans was one of the brilliant men who followed Schlieman. He uncovered the great building that was the very heart of that lost
world—the Palace of Minos at Knossos in Crete.

Even the carved stone throne of Minos has been preserved, with the griffin frescoes that graced the throne room; a cast of it may be seen in New York’s Metropolitan Museum. Excavations at other sites in Crete, at Mycenae and Tiryns, have filled out the picture of a reality more amazing than the legend of Atlantis and the myths of the Greeks.

It
was a strangely modern world, whose remains the spades have brought to light. Uncannily modern, in matters as various as plumbing and art and architecture and women’s gowns. Every find at Knossos helps bring to life a gay and sophisticated court.

But the Minoan world had its darker side. Archaeology supports the grim legend of the Minotaur. Wall paintings show men and girls engaged in the deadly
game of “bull vaulting”; and Dr. Evans found even the dungeon pits, in which the victims of a cruel religion must have awaited sacrifice.

After all the scraps of knowledge have been pieced together, however, Minoan Crete remains a strange and fascinating riddle. The Minoans, it is true, left records. They were, in fact, the first printers—on clay—from movable type; and the alphabet itself may
have been carried from them to the Phoenicians after the disaster by the Philistines, who seem to have been Minoan
émigrés
. The Minoan script known a “Linear B” was brilliantly deciphered in the early 1950’s by Michael Ventris, turning out to be Greek. Other recent work in Minoan archaeology has generated more controversy than fact, however; and the true history of the fall of Knossos is still
veiled in myth and magic.

The fall of the ruthless and decadent Minoan despotism, it seems, must have been one of the decisive events of history. For the democracy and the civilization of Greece, the basis of our own, could have been built only upon the ruins of the Minoan age. The Greek conqueror, then, is one of the supreme men of history. Legend has brought us his name—Theseus.

Knossos fell.
The coincidence of earthquake and sword and torch is still a riddle. But the world’s oldest and greatest
palace was turned into a mound of ruin. For three thousand years it lay abandoned, “uncanny, haunted ground.”

Magic and ritual—as the findings of Evans and McKenzie and Pendlebury and the Haweses and others confirm—played a grimly dominant part in the life of Crete. Immemorial Knossos may
well have been the cradle of the magical arts. The jigsaw puzzle of myth and archaeology and the fragmentary Egyptian records seem inevitably to fall into a dreadful pattern. The most plausible answer to all the riddles of Minoan Crete is—wizardry!

“W
HAT ARE
the omens, Captain Firebrand?” Cyron, the bearded Dorian pirate, looked nervous. A hairy hand clutched one of the stays that supported the long galley’s single mast, and his scarred face was apprehensive as he peered across the glancing blue water between the green head-lands. “Shall we run for the islands?”

Theseus, the tall Achean, stood near the high wolf’s-head standard that
rose above the prow. His legs were set wide against the roll and toss of the narrow ship, and his long red hair whipped back in the wind. He shaded his blue eyes, and looked with Cyron into the strait ahead.

Dancing on the white-glinting blue, between the points of land, he found two black dots and a yellow one. He studied them carefully, and the cloud-streaked westward sky, and the ruffled track
of the wind upon the sea.

At last his hard tanned body straightened, in the simple loincloth of captured Egyptian linen. He tossed his red mane back again, and his quick voice rang above the weary monotonous chant of the oar slaves and the creak of the wind-strained rigging.

“The wind is with us, Gamecock,” he said. “They are only two against our one—we can forget the trader until the war galleys
are sunk. And our bronze beak makes us the equal of three—you said so yourself, when we rammed the last Egyptian.”

“Yes, Captain Fireband,” agreed the anxious Dorian. “But
that
was an Egyptian—”

The hairy pirate shuddered a little, in the long stiff cloak of bead-embroidered purple silk that had belonged to a Cretan naval officer. But Theseus drew the long straight sword from his belt, and looked
into the polish of its blue steel.

“The men are hungry for plunder,” he told Cyron. “And the Falling Star is thirsty for blood.” A tense little smile touched his lean face. “I read my omens in the mirror of the Falling Star,” he said, “and they are always good!”

He turned on the planking that decked the narrow bow, and shouted past the mast to the slave-driver perched on the lip of the oarsmen’s
pit beyond:

“A faster stroke! We must cut them off before they pass the headland!”

The Mycenean’s long whip hissed and cracked. Forty-four slaves bent to twenty-two oars, eleven to the side. Their endless chant grew swifter, and the galley leapt to its rhythm.

“Hail, Captain Firebrand!” came a shout from the two score of sailors and fighting men crowded on the deck
above the after cabin, beyond the pit. “Do we fight again?”

Theseus cupped tanned hands to his face. “We fight,” he shouted. “And when the lots are cast, we shall have treasure from the north coasts to divide. Gold and amber and furs—and perhaps even fair northern slaves!”

Cheers answered, and he ordered:

“All hands make ready to attack and board!”

Bronze blades rang to the stone. Archers
flexed and strung their bows, a slinger stretched his thongs. The boarding crew fitted on leathern helmets, laid ready their long bullhide shields. At his fire above the pit, the one-eyed Tirynthian cook began heating pots of sulfur.

“But those leading sails are black, Captain Firebrand.”

“I see that they are black, Gamecock.”

“The black sails mean that they are war galleys of the royal navy of Minos,” rasped the apprehensive pirate. “They are guarded by the uncanny artifices of the warlock Daedalus, and by the wizardry of Minos himself. There will be black priests of the Dark One aboard them, to blast our bodies and our
souls with their deadly magic.”

Urgently, he touched the bronze arm of Theseus. “Let us turn and run for the islands, Captain Firebrand,” he begged, “before their tricks of wizardry set the wind against us, to shatter us against some hostile coast!

“Let us wait for an Egyptian galley,” he pleaded huskily, “guarded only by the distant sleepy gods of the Nile. Or perhaps a trader from the East,
that trusts in the dusty deities of dead Babylon. Or maybe we shall meet another merchant that carries only the feeble godlings of Troy.”

His hairy hand trembled. “Captain Firebrand, we dare not defy the gods and the warlocks of Crete—your attacks must already have angered them, and their wizardry is the strongest in the world. An Egyptian priest told me once—before I disemboweled him—that all
magic came first from that evil island. Shall we turn back, Captain?”

Theseus touched the gleaming gold-and-silver inlay that covered the hilt of the Falling Star.

“Not so long as I am your elected captain, Gamecock,” he said soberly. “I joined your ship, a year ago, because the pirates are the only men in the world who defy the magic and the fleets of Crete. Even the great Pharaoh flatters
Minos, and sends him gifts of silver and black slaves and apes.”

Dancing with the Dead by John Lutz
Jasper John Dooley, NOT in Love by Caroline Adderson, Ben Clanton
The Watcher by Joan Hiatt Harlow
I Was a Revolutionary by Andrew Malan Milward
Words Spoken True by Ann H. Gabhart
Awakening by Caris Roane
Only We Know by Victoria Purman
Midnight's Kiss by Donna Grant
Torn (The Handfasting) by St. John, Becca
The Tolling of Mercedes Bell: A Novel by Jennifer Dwight