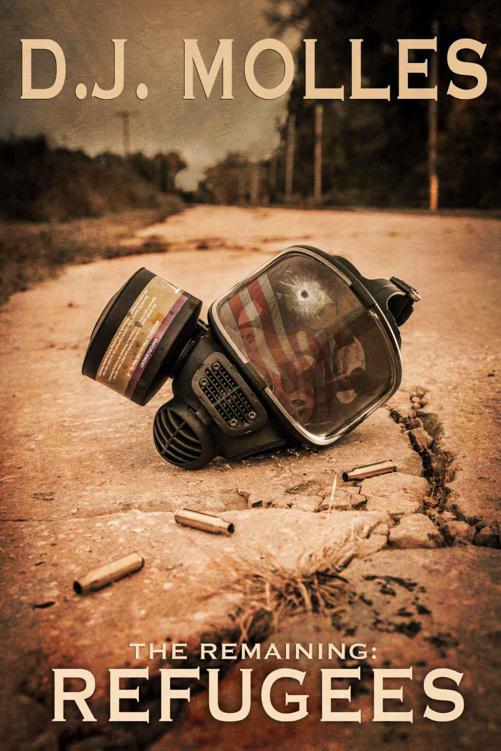 This is an original work of fiction by D.J. Molles, who holds the sole right to all characters and concepts herein.

Thanks for everything—from proofreading to trucks to demolitions training:

In the cold morning light,
diffused through
a thin veil of c
louds, their breath came out
of them in bone-white plumes.
Thick beards covered
both
their faces. T
he shorter
, balding
man crouched over a single-burner camp stove and attached the sm
all green propane
tank
. As
the shorter man
worked,
the taller
man
held his
tan-
coated M4 rifle
at a low ready and scanned the derelict streets around them.

The concrete
surrounding them
sparkled with a thin sheen of frost. Squat buildings stared down over them like
empty and plundered tombs. T
heir windows
were
either boarded up with
graying
plywood, or smashed through, leaving only jagged
glass
teeth protruding from the window frames
. Directly beh
ind where the two men worked
stood a
two-story
brick building
,
and
as the tall man scanned, h
e could see
dark figures
atop the roof,
silhouetted against the sky.
The figures
peered over the side and watched intensely
.

The two men worked
in the center of a four lane street. Along the edges, trash
had gathered at the base of the buildings and
the gutters,
where wind and rain had swept them.
All of it
was old
and sun-bleached and melded into anonymous heaps. From these mounds of trash, hastily disguised, small green rectangles poked up. Wires ran off of them and trailed up the side of the building to where they dangled from the rooftop.

Lee looked down to see Harper setting the lighter
’s tiny butane flame
to the gas grill and slowly turning the propane on. There was a shallow hiss
,
and
then
blue flames jumped up from the burner, sending up a wave of heat that felt pleasant on Lee's face. Harper adjusted the flames so they quivered low and then set a grungy looking aluminum pan atop the grill.

Lee took one last look at his surroundings and bent to the ground where he had
laid
a small canvas satchel. He opened the top and retrieved the only item it contained: a gallon
bag full of
deer guts,
the pale coils of intestines
steeping in a marinade of blacken
ing blood. His nose wrinkled as
he bent over the grill and dumped the bag into the heating pan. The air smelled immediately of a stagnant slaughter house.

Harper growled low in his throat and shook his head. "
Disgusting
."

Lee nodded in agreement and gingerly zipped the plastic bag closed
, stuffing
it back in
to
the canva
s satchel. Letting his rifle rest on its sling, Lee pointed for the building where all the thin black wires trailed up to the roof. "Let's go."

Harper snatched his own M4 off the ground and
they headed for the
open door at the base of the building. Lee
matched
his pace
,
just barely showing the limp in his left leg.
The
ankle had never healed properly from his fall down the elevator shaft three months ago. His back hadn't been the same
either, and i
t had become
quite
a process to get mobile in the morning
.

They picked their way through the ransacked interior of the building
—
an old mom-and-pop pharmacy. T
he shelves had been tipped over,
everything
emptied and looted.
Refugees and scavengers had taken what they needed,
leaving behind the pill bottles and packages. At the back of the pharmacy, where a sign that read "Cold Remedies" hung over empty white shelves, a door opened into a stairwell that led up to the second level, and from there to the roof. The door was in splinters from when Lee kicked
it in earlier that night. T
he place still smelled of death.
They had not moved the bodies of the pharmacist and his wife
. They remained
h
uddled in the dark corner of this
shit-stained storage area.

The only light in this upstairs area came from an open skylight with a pull-down ladder to provide roof access, and from the three glow sticks lying on the
dark
floor like a
strewn out
const
ellation leading
to the ladder
and
creating an eerie green glow across the floor.

On the roof, he
found the other eight members of his team with their backs against the brick abutment of the roof and their rifles
lying
across their laps. Seven men and Julia
, Marie's sister from Smithfield.
She
had insisted
on being
a part of the team
and working
as their medic.
After she had
explained her background as an EMT, Lee welcomed her to the team.

He
crossed the tar-paper roof and sidled down between Julia and LaRouche. The sergeant's old tactical vest was worn and grimed to a grayish tan, and some of the edges were frayed from the constant hard use. His
light brown
hair was about as overgrown as Lee's, but he kept his
reddish
bear
d hacked shorter with his knife
. As Lee sat down next to him, LaRouche dug a packet of
Red Man
out of his cargo pocket and stuffed his cheek with a giant chaw. He'd found a box of the stuff squirreled away in a house earlier that week
and h
a
d been so overjoyed
that
Lee thought
he
might shed a tear.

LaRouche offered Lee the pouch, but he declined.

Lee turned his attention to his right
, where Julia sat
. Her skin was pale to the point of looking green and her lips were seized down to a short, flat line across her face. She avoided eye contact with Lee.

S
he nodded
, but didn't speak.

He
leaned back and stared up at the granite skies. "It has to be done."

She closed her eyes and shook her head. "I just can't find a way to make it right, Lee. I'm sorry, but I don't think I'm ever going to be comfortable with it like you are."

Lee didn't respond for a moment, just watched his breath drift up into the air.
It’s going to be a cold winter,
he thought.
Not usually this cold by November.
H
e moistened his lips. "Just because I do it, doesn't mean I'm comfortable with it."

"They're people," she repeated.

Lee looked at her
again,
and
this time
she met his gaze.

The smell of burning innards began to drift up to them from where the bloody mass boiled and smoked on the pan below them. He turned to his left where LaRouche, Harper, Father Jim, and the rest of the group were lined up, their hands resting on the grips of their rifles.

"Everybody locked and loaded?"

Thumbs up from everybody
.

Lee rose to his knees and peered over the abutment to the street below.

The downtown area of Lillington was spread out over a few small blocks. The building they were perched on stood at the southwest corner of Main Street and Front Street, where they had set up the small burner
,
letting the smells of dreadful cooking waft across the small town. Opposite them were a collection of small businesses: a barber shop, a diner, the Lillington Chamber of Commerce, and a few boutiques. Everything
stood
gray and dead and falling apart.

Wild by Eve Langlais
A Mutiny in Time by James Dashner
Quiet as the Grave by Kathleen O'Brien
Secrets and Sins: Raphael: A Secrets and Sins novel (Entangled Ignite) by Simone, Naima
Louise Rennison_Georgia Nicolson 08 by Love Is a Many Trousered Thing
The Age Of Reason by Paine, Thomas
Banished by Sophie Littlefield
A Fight For Love (BWWM Interracial Romance) by J A Fielding
Shadow on the Sun by Richard Matheson
The Peculiars by Maureen Doyle McQuerry