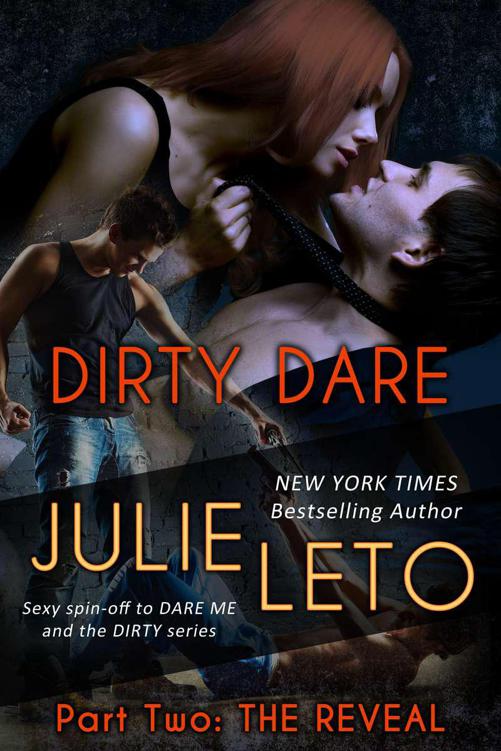 A sexy suspense spin-off of
Dare Me
& the Dirty Series

Praise for the “DIRTY DARE, PART ONE: THE RESCUE”

“I’m already counting down the days until the next installment in this series.!”

“A quickly paced spy story where the action is broken only by the hot sex scenes.”

“I’m a big critic of the new trend in serial writing, BUT Dirty Dare and Julie Leto have converted me. I can’t wait to find out what Sean and Brynn have in store for me next!”

With languid, careful slowness, Sean Devlin popped the buttons on Brynn Blake’s blouse and peeled aside the silky material. With his fingers, he mapped the smooth skin beginning at her cheek then explored down her throat and over the soft curve of her breasts.

He did not close his eyes. He’d seen every inch of her from a hundred different angles, but each new unveiling was a revelation—a lesson he needed to learn.

In the growing darkness of their small hotel room in the Spanish coastal town of San Sebastían, he saw her again as if for the first time. He slid his fingers through her rich, red hair. He smoothed his thumbs over the shadows forming beneath her electric green eyes. His energy, rebounding after a couple of hours of sleep, zinged with each subtle blush of her ivory skin. When Sean had first seen Brynn, his swollen eyes and battered brain had mistaken her for someone else.

But she was nothing like that other woman. Jayda Hai had shredded his life down to a superficial condition where survival had been his only reward. Brynn Blake, on the other hand, had devoted the past six weeks of her life to building him back up. He was grateful. He was surprised. But mostly, he was stubbornly wary of what would happen next between them.

Beyond the sex. That, he knew, was inevitable.

From the moment she’d secreted him away to a safe house in Barcelona, he’d studied her. He’d watched her as continuously as his uncertain consciousness had allowed, determined to learn her habits so he could figure out how to escape her “protection.” But the stronger he got, the less he’d cared about breaking free—and the more he’d simply wanted to break through.

Even under his constant scrutiny, Brynn was not an easy woman to know. Shrewd and controlled, she’d cleverly chosen seduction as her means of keeping him under her thumb. Sean had played along, knowing a well-satisfied woman would more easily reveal her secrets.

His strategy had worked, but so had hers. As a result, he’d become as much her protector as she was his. She’d put her future in his hands. She’d defied orders. Risked her career. Her life.

And now, because of him, she was on the run, arranging for illegal passports to get them from Spain into France and helping him track down whomever had had him kidnapped, tortured, rescued and then locked away again. The mission swelled with unknowns, each one making their chances of getting out alive more unlikely.

Then again, dead wasn’t the worst thing that could happen.

“You should get some sleep,” he murmured, his lips thrumming against her neck.

His torture had been an open wound—her rescue, the tourniquet. Making love to her the first time had acted as a drug injected into his veins. When she wasn’t right beside him, he craved her. When he had her in his arms, he wanted to take on the whole world, starting with the spies, liars and killers who had sent them running halfway across the world from where he’d started.

If he could let her go, she’d be safe.

But he couldn’t bear the idea of pushing her away. Not when he needed her. Not when she needed him.

“You’re my tonic,” she crooned, smoothing her hands over his cheeks and directing his face to hers. “I’ll sleep…after.”

He could not deny her. In any other scenario, he might have been able to abandon her and find his own means across the border. Two, three months ago, that’s exactly what he would have done.

But in the back room of that dank warehouse where he’d been tortured, he’d changed. He’d faced death, certain no one knew where he was. And even if they had, he could think of no one who would care enough to stage a rescue.

Then, Brynn had come. She’d dragged him away from death and pushed him toward survival—to strength. How could he deny her anything now?

Under his touch, her clothes dissolved. Jeans. Panties. Bra. He slid her beneath the sheets, intending to explore her at his leisure, as if he had not blazed this exact path the day before—and the day before that and the day before that. But she surprised him by curling onto her stomach and hugging a pillow to her chest. She pulled her knees up slightly, offering him an unhampered view of her luscious backside, a part of her anatomy he had not worshipped nearly as much as it deserved.

While he drew a lazy finger down her spine, pausing at the sweet depression at the small of her back, she dragged another cushion to cradle her cheek.

“Angling for a massage, perhaps?” he asked.

She turned her face, her saucy expression enhanced by the way her teeth tugged at her bottom lip. “I have been sitting in that chair, watching you sleep, for an awfully long time. I’m stiff.”

“Do you know how to give a proper rubdown?” she asked.

He grinned. “Doesn’t take a degree in physical therapy for a man to figure out how to rub his hands down a beautiful woman’s body.”

“What if I want more than hands?” she asked.

“Whatever the lady wants…”

He tore the covers off the bed, wanting nothing in between him and her naked flesh. But in the interest of practicality, he kept his clothes on.

They were on the run. Though they had no reason to suspect that anyone had followed them from the safe house in Barcelona to touristy San Sebastían, twenty kilometers from France, they had contacted a known forger as soon as they’d arrived. They needed passports to get across the border.

To that end, they’d visited the nondescript apartment of a forger nicknamed
el Creador
, had their photos taken and their fake information recorded for transfer onto paperwork that would get them into France. Now, they simply had to wait for the man to work his magic.

In the meantime, Sean would work his.

While Brynn snuggled into the pillows, Sean stepped into the bathroom and retrieved a basket of toiletries. On the way back, he double-checked the deadbolt on the door, did a brief visual out the window to the quiet side street below and, catching sight of nothing out of the ordinary, he pulled the blinds back into place.

The night was chilly. As he climbed onto the bed beside her, a bristle of goose bumps spread across her skin.

He made a half-hearted attempt to move, but she snagged his wrist. “There are other ways to warm me up, mister.” She laid her cheek on her arm and exhaled until she was the embodiment of relaxation. “Now get to work.”

“You make it sound like touching you is some kind of chore,
cher
. If it is, I’m about to become the hardest-working man this side of Spain.”

Under no other circumstances would Sean allow himself to indulge in such a blatant distraction when he was on a mission. Though he’d bucked the system during his time with the CIA, he’d never broken the strict protocol against fooling around when he was supposed to be vigilant.

And where had those scruples gotten him?

With Brynn, Sean had already thrown the old rules out the window. He’d already formed a connection deeper than he’d ever imagined—deeper than he’d experienced with any other woman. But when they parted ways—and he knew without a doubt that they would—she’d remember him with no regrets.

He couldn’t guarantee much in this life, but he could make sure of that.

He dug into the toiletries, extracting a promising-looking lotion. He uncapped the top, took a sniff, then recapped it and warmed the tube by rolling it between his palms.

She shivered, squealing quietly as the temperature of the lotion yielded to the heat of her skin. “That’s a lot of lotion.”

“I intend to spread it far and wide. And speaking of wide,” he said, drawing his hand from her ankle to between her knees, “I’m going to need you to open up for me,
cher
. I’m going to need to see if I’m achieving the desired effect.”

Before he teased his fingers into the lotion, he stuffed a few more pillows under her, elevating her bottom so that she was almost on her knees. With her thighs spread and her ass raised, he spied the sweet, pink flesh of her sex and imagined it pulsing in anticipation of his touch. Not that he needed evidence to prove her arousal. He knew her telltale sounds. The coos. The squeals. The breathless sighs.

This was the kind of covert intel a man should risk his life for.

He swirled his finger into the reservoir of lotion he’d pooled on her back, drawing tendrils of scented emollient upward and outward, slickening his hands so that they glided over her flesh like hydrofoils over still water. He started at her shoulders, digging into the taut muscles before drawing the moist pressure down her arms, around her slims wrists and fingers. He teased his thumbs up and down her side as he went, avoiding contact with the fleshy curve of her breasts, knowing from the way she wriggled that she wanted his touch precisely where he was denying it.

He flattened his hands on her shoulder blades, forcing her to remain in place.

Sean laughed. “That doesn’t fit with your image, you know. So cool, so collected, so in charge.”

“So wanting you inside me,” she said, reaching out toward the waistband of his jeans.

He slid aside. “Patience,
cher
. You know what they say—good things come to those who wait.”

“Coming is the good thing.”

He rewarded her pun with a long, luscious suckling at the back of her neck while he worked a magical path down the tight tendons protecting her spine. When he finally reached her ass, the muscles were taut but soft. Fleshy but wanting. He kissed each of the vertebrae from her neck downward, using lips and hands to pleasure every exposed centimeter of skin, which she rewarded by pulling her knees in close enough so that when he went up and over the curve of her backside, he had an unhampered view of her sex.

“I’m all out of lotion,” he said with a groan, clutching her tightly so that his fingers imprinted on her flesh.

He was done teasing. He reached between her legs, into the warmth between her thighs. This was slickness that couldn’t be copied by any lotion, couldn’t be mimicked by any exotic oil. This wetness was liquid silk, and he couldn’t help but stroke, rub and slide until she was crying out for him to take her over the edge.

My First Hundred Years in Show Business: A Memoir by Mary Louise Wilson
Lieutenant (The United Federation Marine Corps Book 3) by Jonathan P. Brazee
Arbiter (The Arbiter Chronicles Book 1) by Elisa A. Bonnin
The "What If" Guy by Brooke Moss
Lyndsey Cole - Lily Bloom 02 - Queen of Poison by Lyndsey Cole
The Karnau Tapes by Marcel Beyer
As Time Goes By by Michael Walsh
Amazon Slave by Lisette Ashton
A Charm for Draius: A Novel of the Broken Kaskea (The Broken Kaskea Series Book 1) by Reeve, Laura E.
The Fundamental Theory of Us by Alyse Raines