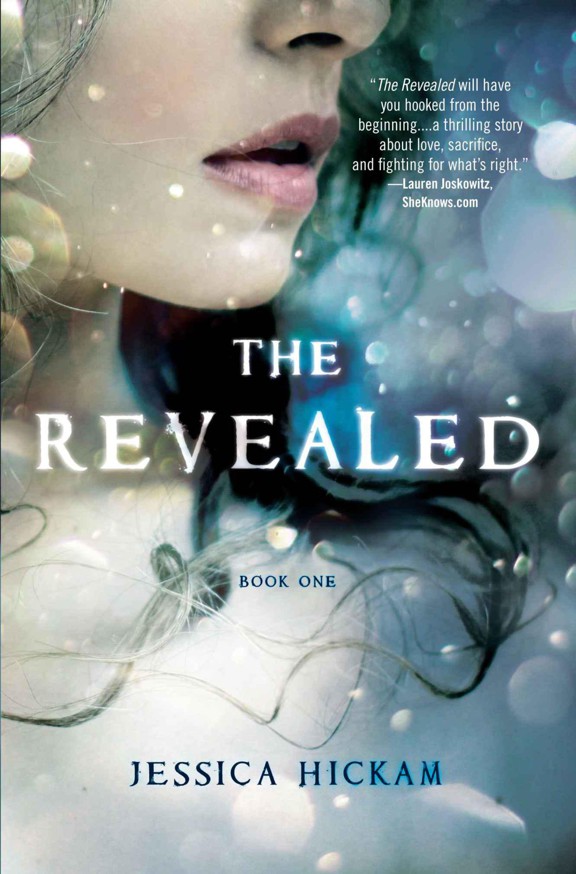 Advance Praise for
The Revealed

“Ripe with political intrigue, forbidden romance, and a mysterious group of outsiders who threaten to turn Lily Atwood’s world upside down,
The Revealed
is a riveting story about love and courage. It’s also a captivating look at a future society where overcoming the odds means finding the power within yourself to become truly extraordinary. Jessica Hickam has written a story that will entrance readers.”
—Emily Kiebel, author of
Serenade

“
The Revealed
will have you hooked from the beginning. Jessica Hickam has written a thrilling story about love, sacrifice, and fighting for what’s right. This book will surely lead the pack in the next wave of popular young-adult novels.”
—Lauren Joskowitz, entertainment manager, SheKnows.com

“
The Revealed
weaves an adventurous tale of true love, deception, and bravery. Along the way, Jessica Hickam captures the beauty—and heartache—of finding your first true love. And, most importantly, finding yourself.”
—Leesa Coble,
BOP
and
Tiger Beat

“Filled with heart-pounding action and suspense,
The Revealed
is a vivid exploration of one girl’s fight against the seemingly impossible—and the forbidden love that helps her survive. The adventure will keep readers wanting more. Jessica Hickam is truly a young author to watch!”
—Neville Page, concept designer,
Avatar

“There’s much to admire in this debut novel”
—
Kirkus Reviews

A division of SparkPoint Studio, LLC

This is a work of fiction. Names, characters, places, and incidents either are the product of the author’s imagination or are used fictitiously. Any resemblance to actual persons, living or dead, is entirely coincidental.

Dedicated to my sisters, Megan and Sarah.
Big adventures are waiting for us.

“Reach for the stars, and if you miss, aim for the heavens.”
—Unknown

If I’m going to be taken, I plan on having at least a little fun first.

Sleek and silver with the latest technology, including dent-resistant metal, my father’s Aston Martin is made to drive. The doors recognize DNA and I’m half him, so it’s easy to break inside. I just press my hand against the door. The car needs a moment to analyze, then lifts the door, allowing me to slide into the driver’s seat. I toss the still-sealed letter onto the passenger seat.

There’s no need to open it. I know what it is.

The car’s ignition can either be started with fingerprint recognition or overridden by the key. I took the keys from the shelf by the front door while my mother wasn’t home earlier this morning.

I shift gears and press my ballet flats on the gas, not wasting any time.

The odometer climbs higher as the car smoothly accelerates.

The sensor in the car’s front mirror triggers our gate, and it opens just in time for me to speed through.
Let security try to track me down now.

Pulling out onto the main road, I press my foot to the floor, going well over the speed limit.

I glance in my rearview mirror.

My eyes return to the road.

Strategically placed, black SUVs block my path to the freeway. My lungs constrict, forcing the air from my chest. Somehow they’re already one step ahead of me.

I grip the wheel.

My foot hits the brake.

Adrenaline spins through me as I brace the wheel, keeping the car straight.

My knuckles tighten. I feel the road beneath me slipping under my feet.

The Aston slams to a stop, throwing me up against the wheel. The first SUV is only inches in front of me. Relief fills me but is quickly erased by mounting frustration.

I rip off my seatbelt, stomping out of the car.

Jeremy, head of my father’s security, stands at the front of the line. There are half a dozen other members of security lounging against the cars as they wait for me to arrive. They straighten to a standing position once I storm toward Jeremy.

Jeremy’s lips are carved into a thin line. He looks like he’s expecting me to barrel into him and continue running down the road. “Did that scare you enough to get these insane ideas out of your system?”

“You could have made me crash!” I advance on him.

“Good thing you were paying attention then,” Jeremy says, opening the backdoor of the SUV. I hand over the Aston’s keys and slump inside. The smell of the black leather reminds me of past trips to speeches and conventions. My father used to let me pick the music on the touch screen positioned in the side-door panel, anything I wanted, while my mother would chastise me for turning it up too loud. But my father would just laugh and tell her to let me be a kid. I feel like a kid now more than ever, and it’s a hard reminder that I don’t get to make significant decisions. Especially when it comes to my life. It has already been laid out for me.

Jeremy tosses the Aston’s keys to one of the security guards standing behind him. He’ll drive it back into the garage. “You’re gonna get yourself killed if you keep pulling these stunts,” he continues his lecture.

“Either I do it or The Revealed does,” I say as he slams the door, trapping me securely in the back.

Two hundred fifty-two days until I’m nineteen.
If I make it until then.

Jeremy is about ten years older than I am, a war vet who came to my family’s rescue a few years ago and quickly advanced to the head of our security. He keeps his dark hair short and holds himself stiffly, marching around doing his job. Most of the time he’s assigned to watch after me. It used to be kind of a joke. I would see the challenge in his eyes, daring me to find a way to outsmart him. Now he just looks bored, tired of my escapades.

My parents are rarely home these days. They apparently don’t have time to supervise their eighteen-year-old only child.

Jeremy opens the door and sits behind the wheel. “How did you know I left?” I ask.

“The cameras caught you taking the keys this morning,” he says. He pinches the bridge of his nose and then runs his fingers over his eyebrows. This is all business to him, and it’s been a long day on the job.

“Right,” I sigh and cross my arms over my chest.

From the front seat, Jeremy turns to glare at me before he starts the car. “You know, you could try listening to your parents for once. They’re trying to save your life.”

“No one has ever been saved once The Revealed choose a target.”

“No one targeted has ever been the presidential nominee’s daughter before.”

I roll my eyes and look out the window so I don’t have to argue anymore. Not that there’s much of a view, just trees and grass. Capitol City once had giant cherry trees—thousands of them, all with light-pink flowers in place of leaves at certain times of the year. My father used to take me to the park when we took our regular trips to Washington. I would decorate my hair with the petals. People cut the trees down when the war first started. It was a message of isolationist action, my father always said, since the trees were originally gifts from abroad. Not a very effective message. Now, there’s only a monotonous green.

The drive home is short; I’d made it less than a mile. I watch sullenly as Jeremy punches in the gate code, and the tall wrought iron gate splits. The bars may be twisted into a pretty pattern, but the metal doesn’t fool anyone. It’s at least twice my height and equipped with a security camera and alarm. Once that gate is closed, no one is getting past. I’m not sure if it’s to keep The Revealed out or keep me in.

Jeremy waves to the guards on duty at the entrance station as the car passes through.

Our house is laid out on thirty acres. The gate continues all around the property. Cameras are positioned at every entrance and more dot the landscape like decor. There is always someone in the control room watching the footage.

This house is more like a castle than a home. It was built specifically for my father after the war, with over twenty rooms, two kitchens, fifteen and a half bathrooms, a ballroom, two pools, and a guest house around the side of the property. Jeremy lives in the guest house—one of the perks to being head of my father’s security team.

This isn’t home to me. My home was back in our small three-bedroom house in Oro Valley, Arizona where I was born. I loved that house. Living there was the last time I felt at home. We moved shortly after my father was elected to the Senate when I was eight into a house that was more
suitable
for someone of his stature.

I know it’s selfish of me to be ungrateful for this mansion. Selfish of me considering the vast majority of the population now works in the factories and lives in studio apartments—struggling day to day, barely able to make ends meet. I know nothing of working twelve-hour days. I look at my ballet flats and picture them covered in tar. Even the thought of the thick, burnt scent makes me turn up my nose. My house was built on the opposite end of town from the factories on purpose.

I should be grateful, but this house is too big and spread out for the three people who occupy it. My mother hired an interior decorator, of course, and most of the rooms are kept impersonal and bland with ruffles and silk to hide the fact that no one ever uses them.

Jeremy escorts me through the door, catching my arm as I trip over one of the new chair deliveries. I walk inside and ignore my mother fuming in the entry, tapping her foot on the Italian tiles. Her eyes burn but her face is smooth. She wouldn’t want to cause any brow lines.

Men move around me, bringing towering flower arrangements through the door behind me. “Just put them over there,” she says, waving at the ballroom entrance. I duck past, hoping the deliveries will distract her.

I hear the click of her heels as she marches after me. “Just what do you think you were doing taking your father’s car like that?” She’s holding a shuffle of papers but has decided my escape attempt warrants an interruption from her party planning.

Learning the Hard Way by Mathews, B.J.
Acoustic Shadows by Patrick Kendrick
On Trails by Robert Moor
Apparition Trail, The by Lisa Smedman
Dangerous Passion by Lisa Marie Rice
The Road of Lost Innocence by Somaly Mam
Commonwealth by Ann Patchett
Fear of Frying by Jill Churchill
Taking Risks by Allee, Cassie
The Body in the Lighthouse by Katherine Hall Page