Read The Rhythm of Memory Online

The Rhythm of Memory 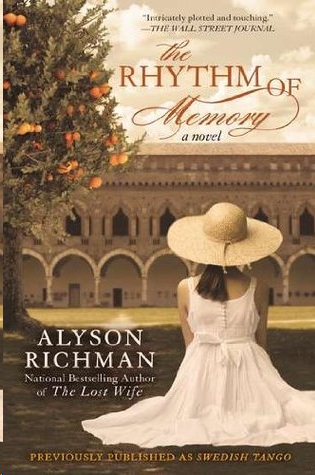 P
RAISE FOR THE WORKS OF
A
LYSON
R
ICHMAN

The Rhythm of Memory

“The cry of every refugee, the eerie sense of being transparent, dispensable, irrelevant, emerges powerfully from Alyson Richman’s intricately plotted and touching narrative…The four main characters are so authentic, so flawed and so touching, and their stories so believable, that a reader ends up rooting for all of them.”

“An engrossing examination of the prisons people create for themselves and the way they accustom themselves to suffering until liberation seems as painful as captivity. This is an ambitious exploration of political and personal struggles.”

“A heart-wrenching story of loss and love in the lives of people affected by war and political upheaval…[marked by] sharp resonance.”

“Deep, thought-provoking philosophical questions on the needs of an individual and a family against the demands of deadly leadership and a nation.”

“Staggeringly evocative, romantic, heartrending, sensual, and beautifully written, Alyson Richman’s
The Lost Wife
may well be the
Sophie’s Choice
of this generation.”

“Daringly constructed, this moving novel begins at the end and then, in a fully realized circle through the most traumatic events of the twentieth century, returns you there in a way that makes your heart leap. Richman writes with the clarity and softness of freshly fallen snow.”

“Richman once again finds inspiration in art, adding evocative details to a swiftly moving plot. Her descent into the horrors of the Holocaust lends enormous power to Lenka’s experience and makes her reunion with Josef all the more poignant.”

“Tragedy and hope, love and loss, and the strength to endure are examined through Richman’s graceful writing and powerful characters.”

“Begins with a chilling revelation and had me hooked throughout. A love story wrapped in tragedy and survival, I read
The Lost Wife
in one sitting. Tense, emotional, and fulfilling: a great achievement by Alyson Richman.”

“
The Lost Wife
is a luminous, heartbreaking novel. I was barely able to put it down and can’t stop thinking about it.”

“A truly beautiful, heartfelt story…I couldn’t put it down once I started it. Ms. Richman is a very special talent.”

“
The Last Van Gogh
is a balanced symphony…Richman’s style is gentle and sober. With clear, undulating prose…it is as evocative as one of Van Gogh’s paintings. Richman proves she can travel through time to re-create the past.”

“
The Last Van Gogh
paints an intricate portrait of a woman’s life at the end of the nineteenth century…It is a powerful and poignant love story.”

“Recalls Arthur Golden’s
Memoirs of a Geisha
…Her sense of Japanese culture is subtle and nuanced.”

“Richman has successfully drawn upon her historical research and her own experience…filled with historical detail and strong characterization.”

“A meticulous profile of a man struggling against his native culture, his family, and his own sense of responsibility.”

The Rhythm of
Memory

THE RHYTHM OF MEMORY

Excerpt from
The Lost Wife
copyright © 2011 by Alyson Richman.

BERKLEY
®
is a registered trademark of Penguin Group (USA) Inc.

G
IVE SORROW WORDS; THE GRIEF THAT DOES NOT SPEAK
W
HISPERS THE O’ER-FRAUGHT HEART AND BIDS IT BREAK.

She awakened to the sound of birds singing, the morning mist rising above the tall grasses from where she now lay. Her face imprinted with the shapes of crushed daisies, the small flowers folding underneath her fragile face.

A small ant scampered across her arm. A butterfly landed on her mass of matted, black curls before fluttering to an azalea bush. And beneath her, she inhaled the intense and heady smell of the soil.

Several seconds passed before Salomé de Ribeiro realized that she had not died and gone to paradise. She was not dreaming, she was not hallucinating. She was free. The prison was now miles away from where she lay.

They had let her go in a park. A blindfolded, bruised shadow tumbling from a van. She had fallen to the ground with barely a thud, for there was far too little weight on her to cause much of a sound. A hundred tiny bones encapsulated in a delicate, purple skin. The earth had welcomed her, the wet ground sinking slightly beneath her falling form. She had drifted in and out of consciousness for several hours before waking to the sunrise. And now she heard the first sounds of life surrounding her. There was the tolling of the bell from the cathedral; there was the sound of the cars rushing down the streets below. Santiago was waking just as she was, and she savored the sounds and the smells of life.