The Riddle of Penncroft Farm 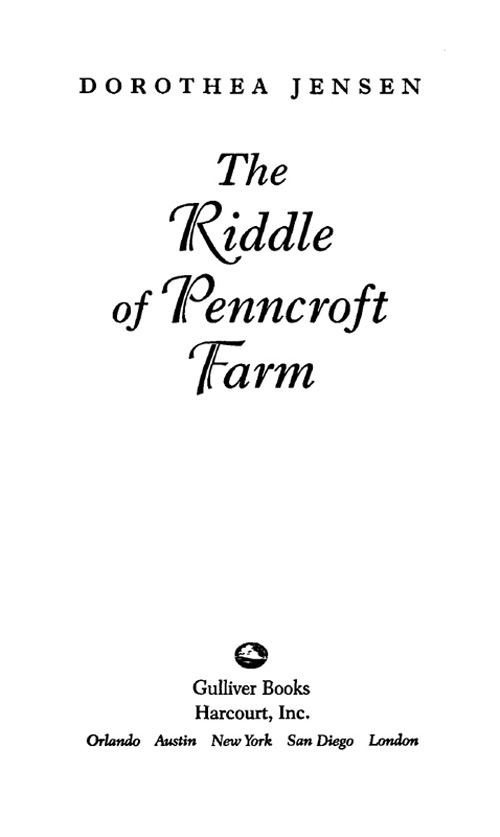 A Shade in the Window

A Custom of Costumes

A Warning for Washington

Not Worth a Continental

Tempered at the Forge

Where There's a Will

The song “Geordie” is from One Hundred English Folk Songs Â© 1916 Theodore Presser Company. Reproduced by permission of the publisher.

To Nathaniel, Adam, Louisa, and David 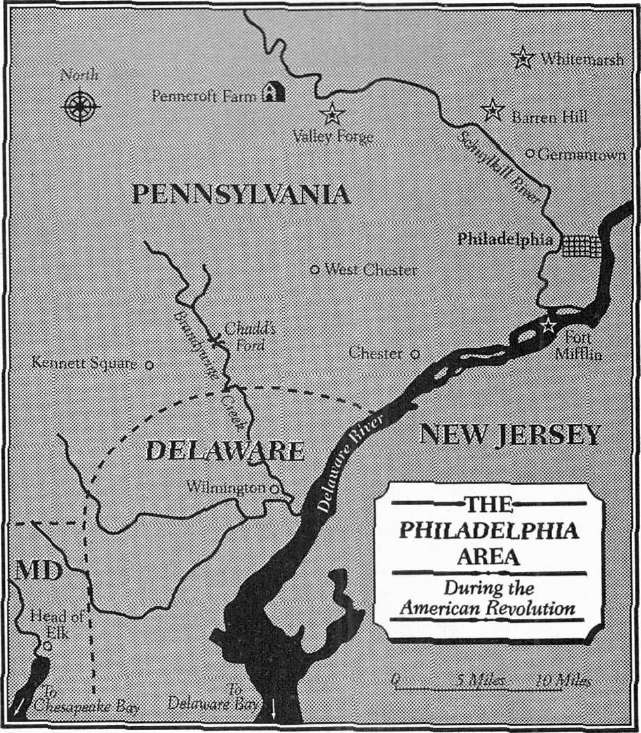 A Shade in the Window

“Penncroft Farm isn't
really
haunted, is it? You told me there are no such things as ghosts,” I spluttered.

“Well, if it makes you feel any better, Lars, I swear that
I
never saw anything supernatural there,” my mother replied. “It was George who swore the place was loaded with ghosts. But then, my brother always did love to tell tall tales.”

Mom was sitting in the front seat of our car and I was stuck in the back as usual, so I couldn't see her face. But I could guess her expression from the sound of her voice. It had the sad tone she always used to talk about Uncle George.

“I wish you wouldn't mention ghosts, Sandra,” Dad protested. “Penncroft can be a
very
spooky spot when the wind moans through that old orchard at night. And you know the house was built before the American Revolution. I'll bet a lot's happened there.”

“I suppose George Washington slept there,” I scoffed.

“No, I'm afraid not, honey,” Mom said, “much to Aunt Cass's eternal regret. Of course, he did spend a winter at Valley Forge, which is only a stone's throw away.”

I leaned forward eagerly. “Valley Forge? Is that an amusement park like Valley Fair back home?”

“Give me a break! We've been doing Minnesota historyâyou know, explorers like Zebulon Pike. Geez, I hope I don't have to learn a bunch of stuff about Pennsylvania. It's not fair having to learn two state histories just because I have to move.”

Dad humphed. “You'll change your mind when we get into Philadelphia and see the Liberty Bell and Independence Hall. Too bad we don't have time today.”

Dad's voice deepened. “I know it's tough, but he'll get over it once he makes some new friends and meets your aunt Cass.”

Mom twisted around to look at me, although it was getting too dark to see much of anything. “When George and I spent summers at Penncroft Farm, he used to play tricks on Aunt Cass. Cass called it
bamboozling
âthat's one of her favorite words. It means fooling someone.”

Mom chuckled. “Among other things, she apple-pied his bed. That's the old-fashioned name for short sheetingâprobably comes from folding the sheet in a triangle like a piece of pie.”

“Like Peter used to do to me?” I thought of how my older brother folded my sheets and tucked them tight so I couldn't get into bed. That reminded me that Peter got to stay in Minnesota because he was in college.

“I'll bet
you
were the best bamboozler, Sandra,” Dad teased.

“Not me! I had better things to do. But Lars, you bamboozled Aunt Cass thoroughly the last time we came, even though you were only two. Whenever she'd go out to hang up the wash, you'd pull in all the latchstrings and strand her outside.”

“I did not! I don't even know what latchstrings are!”

Dad explained that a latchstring was a cord that could be pulled through a hole in a door to open it from the outside.

“Cass is crazy about kids who get into mischief, especially ones named George, like my brother and you,” Mom said. “Even though George is only your middle name, it still works like a charm on Aunt Cass. Guess it reminds her of our ancestor named George. Apparently he was really something.”

“Anyway, Lars
George
Olafson, don't be surprised if Aunt Cass bamboozles
you
. She owes you a couple after that latchstring business,” Dad warned.

Trading practical jokes with an old lady didn't sound too exciting. I stared out the car window at the full moon lighting up the empty fields, and a wave of loneliness shivered through me. “Boy, you weren't kidding when you said this place was out in the country,” I said.

Dad replied, “Yeah, and it's easy to get lost out here. Instead of coming to nice, square corners like in the Midwest, these little country roads snake all over the place. And they've got screwy names, like
Seek-No-Further Pike
.”

I perked up at the mention of pike. Catching walleyed and northern pike was my specialty. So were puns. “Seek-No-Further Pike? Is that what they called Zebulon when he retired from exploring, or does it mean the fishing season's over?”

My double pun got double the usual groan from my parents.

“
Seek-no-further
was the name of an apple grown around here a couple of centuries ago,” Mom explained.

“And it's
pike
as in
turnpike
, Lars. Seek-No-Further Pike is the road that goes past Penncroft Farm,” Dad went on. “It runs all the way to Valley Forge. By the way, Cass says there are bike paths and picnic places up there now. Seems ironic to go to Valley Forge for fun, though.”

“I wonder if our ancestor George was there,” Mom mused.

“Oh,
him
again,” I muttered. I couldn't have cared less about some moldy old ancestor. The next subject, however, did grab my attention; I hunched forward to hear every word.

“Did you call the school yet, Erik?”

“Uh-huh. Lars is lucking out. There's a teachers' convention tomorrow, so he doesn't have to start until Friday.”

It didn't sound like lucking out to me. I'd counted on the weekend at least before plunging in at a strange school. Besides, this weekend was Halloween. I hated to think about my friends back in Minneapolis trick-or-treating around our neighborhood without me. Actually, I quit wearing a costume years ago because I felt so dumb in one. But my friend Pat dressed up, and I'd go with him and wait on the sidewalk. Good old Patrickâhe'd always share his hauls with me.

“Hey, wait a minute! Where will I go trick-or-treating on Halloween?” I asked. “It's this Saturday.”

“Sorry, honey, I guess you won't get to go this year. There aren't any neighbors close enough to walk toâat least at night,” Mom said. “But don't worry, we'll have our own old-fashioned Halloween party.”

“Great.” I slouched back in the seat and closed my eyes. The sound of my parents' voices seemed to come from far away.

“Have you had a chance to ask Aunt Cass about her will, Erik?” my mother asked anxiously.

“Not really, honey. It's pretty awkward. I thought maybe it would be better if
you
asked her.”

“It makes me feel like such a vulture, but we do have to be practical. After all, Cass is ninety years old.”

Dad put the car into low gear for a hilly curve. “I can't believe she would urge us to pull up stakes and make Penncroft our home unless she planned to let us stay after she's gone. Surely she's changed her will so we inherit the farm, Sandra. It's too bad you said you didn't want the place when she first asked you, after George died.”

“Yes, but back then we didn't think we'd ever move here. Then Cass wrote that she was leaving the farm to be used for a museum of the First American Civil War, whatever that means.”

“Well, she did say that the museum idea wasn't working out.”

“We'll have to ask her about her will sometime. Really, if she'd rather have Penncroft be a museum, that's fine, too. I'll be happy wherever we live, Erik, but I
would
hate to uproot Lars again. Moving's been awfully hard on him. Still, I'm glad this Philadelphia job came along so you don't have to travel anymore. Oh! There's the covered bridge!” Mom said excitedly.

Rattling through the old wooden structure roused me. “I've never been in one of these before,” I said. “It's pretty neat.”

“It is quaint,” Mom said. “But that's not the only quaint thing around. Wait until you see your bedâthe one my brother used to sleep in at Penncroft. It has a canopy.”

“A can o' pee? You mean this place doesn't have bathrooms?”

Mom shook her finger at me. “You know very well what I mean, Lars. A canopy
over
the bed, not under it!”

“It better not have ruffles,” I protested.

“Oh, don't worry,” she said. “As canopies go, it's not a bit frilly. It was masculine enough for your ancestor George to sleep under. Besides, George himself is hanging in your room. So's his wife.”

“H-h-h-hanging .Â .Â . ,” I stuttered, every horror movie I'd ever seen replaying before my eyes.

“She's only teasing you, Lars,” Dad said. “It's a portrait of the old boy by Charles Willson Peale, who painted most of the Revolution big shots, like Washington and Franklin. Well, here we are!”

The headlights picked out a crooked wooden fence and a post with a sign in spiky, old-fashioned letters. “âPenncroft Farm,'” I read out loud. “âEstablished 1760.'”