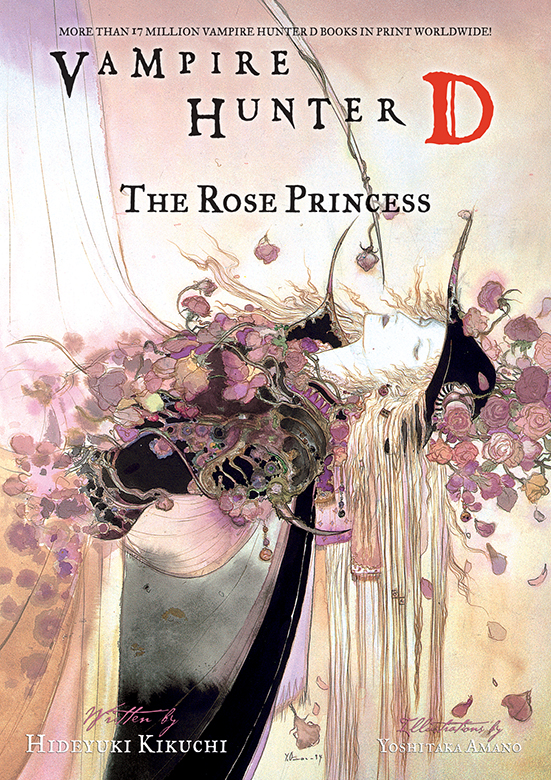 vol. 5:
The Stuff of Dreams

vol. 6:
Pilgrimage of the Sacred and the Profane

vol. 7:
Mysterious Journey to the North Sea part one

No portion of this publication may be reproduced or transmitted, in any form or by
any means,
without the express written permission of the copyright holders. Names, characters,
places,
and incidents featured in this publication are either the product of the author’s
imagination or
are used fictitiously. Any resemblance to actual persons (living or dead), events,
institutions,
or locales, without satiric intent, is coincidental.
Dark Horse Books® and the Dark Horse logo are registered
trademarks of
Dark Horse Comics, Inc
. All rights reserved.

a division of Dark Horse Comics

“Originally published in Japan in 1994 by Asahi Sonorama, Tokyo”--T.p. verso.

O
nce the sweet perfume began to waft through the crystal clear darkness, the villagers
hurried off the cobblestone streets and hid themselves in nearby homes.

The fragrance had always been part of the history of this village. On the evening
of the village’s centennial celebration, the night the new female teacher arrived
from the Capital, the evening when a daughter was born to the mayor, a silent night
when winter’s white storms blustered—each and every time, the fragrance that swept
so sweetly over the road made the people avert their gaze from the castle on the outskirts
of the village as the pain of eternal damnation left their eyes bloodshot.

Why did the wind have to blow through town?

People prayed in earnest for the aroma to be gone and waited expectantly for the dawn.
However, the sun that rose would eventually have to set again, and night would cover
the world like the wings of a crow. And every time the perfume returned, the people’s
suffering carved deep wrinkles in their faces, and the community’s only watering hole
set new sales records.

The shades were drawn on every window, leaving only the streetlights to dimly illuminate
the road where the fragrance alone still lingered. It was the aroma of flowers.

As befitted an evening of this warmth-filled season, the wind seemed to request the
poetry of the night.

A castle gate studded with hobnails rumbled like thunder in a sea of clouds as it
closed, but before it had even started to move, the black-lacquered carriage went
racing through the arched gate to the central courtyard. The wheels creaked to a halt,
and the door opened.

Inside the carriage sat a girl who was scared to death. Although her ample cleavage
betrayed the wild racing of her heart, her plump face had all the color of a corpse.
Even when the sweet aroma and dazzling colors crushed in through the open door, the
girl didn’t move a muscle.

How old am I again?
the girl thought.
Seventeen years and one month. Is this the end? Can’t I live a little longer? And
just three days ago, I was talking with my friends about going to the trade school
in town. Who decided this has to happen? Who chose me?

“Get out,” said a voice like steel from beyond the door. It must’ve been one of those
that’d been sent to get her.

At the urging of an eerie aura and a will that would brook no resistance, the girl
headed toward the door. The carriage steps had already been extended. As her nostrils
filled with the fragrance and her eyes were met by a brilliant wash of colors, the
girl suddenly felt as if she’d been swallowed by an abyss.

“Go straight that way,” a voice told her, the speaker apparently pointing directly
ahead.

As the girl tottered forward, her mind was already half blank. She simply kept walking.
Although she felt something prick at her cheeks and her exposed arms, it didn’t bother
her. When the girl finally halted, her breathing was terribly ragged, and not merely
because of the distance she’d walked.

Her almost nonexistent consciousness had detected a faint figure standing directly
ahead of her. It approached her like a beautiful mirage. The sight of the woman in
a dress left the girl frozen with fear—but much to her own surprise, the girl also
felt a vague fascination. She knew what was going to happen. When she saw that the
dress was white and she hazily made out the woman’s face, the girl then shut her eyes.

What would she do if the woman who’d come to suck her blood was some hideous Noble?
She knew them from the masks she’d seen at village celebrations—they were monsters,
mentally and physically warped.

The girl was seized by both shoulders, and a sudden chill spread through her like
ice. That, and a sweet perfume. But before she noticed that the latter was actually
the breath spilling from the woman, the girl lost consciousness completely.

As the girl’s head fell back and she went limp, the woman gently laid her body down
on the stone road, then turned around. When she’d taken a few silent steps, there
were suddenly footfalls behind her and she detected a presence thoroughly unsuited
to this place.

Perhaps two seconds passed from the time the woman turned until the powerful man pounced
on her. Although he weighed nearly twice as much as she did and had the momentum of
his dash behind him, the woman wasn’t knocked back at all. Instead, black iron went
through the center of her chest and came out her back.

When the man let go of the blade, the woman finally fell back a step.

Judging by the way he then raced over to the girl and hugged her close, his last cry
must’ve been her name. His movements carrying both the despair of having lost a loved
one and also the faintest hope, the young man shook the lifeless form.

“Absolutely,” said a voice that poured ice water down the young man’s back.

He looked up. A figure in white stood quietly in the moonlight.

“However,” the woman continued, “in order to destroy me, you must pierce my heart.
And you were a bit wide of the mark.”

The young man got goosebumps as he rose to his feet. The girl’s lifeless husk was
still clutched to his chest. Dead or not, he wasn’t going to let her go—that was the
resolve that seemed to radiate from every inch of him.

“Will you not run?” the woman asked. “If you don’t, you shall end up exactly like
that young lady. Although if you loved her, that may be for the best. Now—come to
me,” she said. “Or would you prefer that your young lady feed on you instead of me?”

Before the young man even had time to comprehend the full meaning of the woman’s words,
a pale arm had wrapped around his neck.

There could be no more heartrending cry than his in the entire world.

Cradled against the young man’s chest, the girl opened her eyelids.

The young man knew her eyes had always brimmed with hopes for the future. He’d seen
them sparkle with the dreams of a seventeen-year-old. And he knew that it was not
his face but rather that of another young man that her eyes often reflected.

But now her eyes reflected him. In shape and in color, they were no different than
before. However, the normally sharp black pupils were clouded and dark; where the
memories of a seventeen-year-old had been there was now a despicable vortex of hunger
and lust.

“I’m so hungry,” the young man heard the girl say, yet it seemed like her voice was
something out of a nightmare. “You came to save me, didn’t you? I’m so glad. Let me
give you a kiss as thanks . . .”

“Stop, Nagi—! Don’t do it!” he shouted. Pulling free of the arms she wrapped around
him, the young man knocked her cold body to the road.

The girl didn’t even cry out.

“My, but you are a cold-hearted paramour.”

As if triggered by the woman’s voice, the young man started to run. Though panic gripped
him, at least part of his thought processes remained wide awake.

In one spot in the dazzling mix of colors the young man saw a glimmer of a different
material. Leaping into the riot of color, he left the whole mass of flowers trembling.

It only took the young man about a minute to strap on what he found there. As he fastened
the last belt around his left thigh, he heard footsteps closing on him from all four
points of the compass. They didn’t sound like those of the woman he’d just encountered—they
had a foreboding tone. As the ground seemed to tremble beneath his feet, the young
man felt his stomach tighten. The next thing he knew, he was shaking, too.

The second the wild mix of colored blossoms to his right was pushed aside, the young
man kicked off the ground. A heartbeat before his airborne form was due to sink, wings
opened on his back.

Just in time
—and as relief swelled in the young man, he gazed into the darkness ahead of him.
Nothing could’ve possibly felt better than to be gaining altitude like this.

He looked down. Far below him were scattered pinpricks of twinkling light.

In contrast, a heavy shadow fell across the young man’s heart. He’d never be safe
here now. But where could he go?

Impacts to either side of him were transmitted to the center of his back. His body
dipped sharply. Clearly, his wings had been slashed.

Craning his neck, he looked up above.

Although it was pitch-black out, the crimson armor he saw there was branded into his
retinas.

Although the young man madly attempted to pull back on the lever he gripped, the wire
that relayed the movements to his wings seemed to have been severed, and his descent
didn’t stop.

“Do you have any idea what you’ve done?” a voice called out from above him.

Was it following him down?

“Your life alone will not be enough to atone for the crime of raising your blade against
our princess,” the voice continued. “Look back from the hereafter and watch what results
from your reckless actions!”

Suddenly, the young man felt the base of the wings tear free from his back. Without
a peep, he plummeted straight down, dropping into an endless abyss.

Unable to lose consciousness as the wind howled in his ears, he found a dull band
of silver growing in his field of view. It was a river that stretched like a ribbon
far below him.