Read The Run for the Elbertas Online 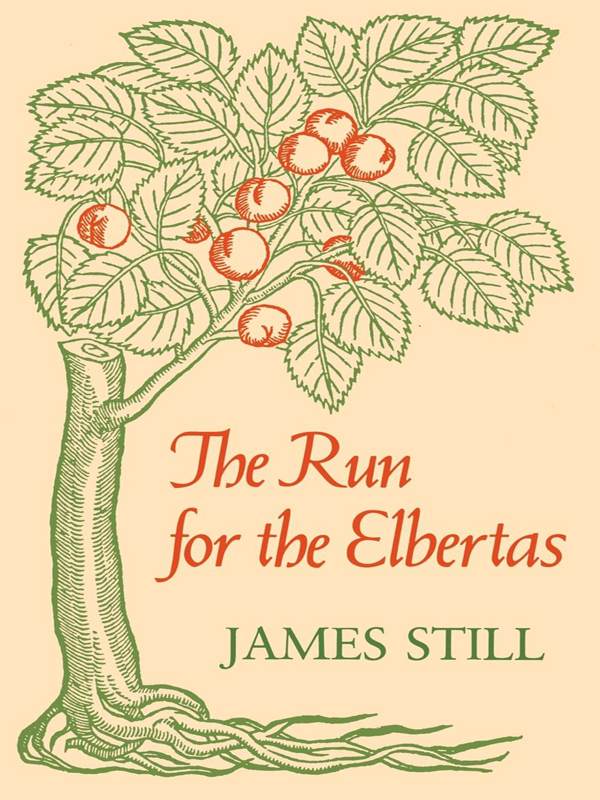 The Run
for the Elbertas

THE UNIVERSITY PRESS OF KENTUCKY

The Library of Congress has cataloged the first printing of this title as follows:

Contents: I love my rooster â The proud Walkers â Locust summer â Journey to the forks â On Quicksand Creek â The stir-off â The burning of the waters â School butter â The moving â One leg gone to judgment â The quare day â The fun fox â The run for the Elbertas â Afterword.

This book is printed on acid-free recycled paper meeting the requirements of the American National Standard for Permanence of Paper for Printed Library Materials.

For
Iris Grannis and Guy Loomis

I Love My Rooster

Journey to the Forks

The Burning of the Waters

One Leg Gone to Judgment

This collection of James Still's stories
âThe Run for the Elbertas
âis doubly welcome. It makes generally available in book form pieces of highly interesting Americana and it also goes far toward insuring that an excellent contribution to our literature will not be lost to sight. When
On Troublesome Creek,
from which several of these stories are taken, appeared in 1941 it received the acclaim of the thoughtful and sensitive reader. So had Still's novel,
River of Earth,
published a year earlier. But Still's literary virtues are solid and quiet, not flashy and sensational. Still's work needs to be absorbed by the reader and by a considerable body of such readers before it can take its due place in the accepted canon of our literature.

Many of the tales in the present volume are told by a boy who is eight or nine years old in the early stories, ten or eleven in later ones. His storiesâand the othersâall have to do with happenings in the Kentucky mountains, presumably in the 1920s.

Most readers will be startled by the revelation of such primitive life still surviving in the southern Appalachians at so late a time. Yet if present-day Americans are to understand themselves, they need occasionally to step out of what we like to think of as the rushing mainstream of American life. Life in a backwater community may provide an illuminating glimpse into the older America, the frontier America, which was a necessary preliminary stage of our present civilization.

The culture depicted in Still's book, though quite primitive, is not brutish; in such a culture men have to be ever
mindful of the elemental facts on which their very existence depends but they do not allow those pressures to make them inhuman. In fact, the people who live along Still's mountain creeks are actually more warmly human than many of the men and women who live the more insulated life of our great cities. For they are to each other never mere cyphersâthey are always fellow creatures, if sometimes all too humanâ even on occasion downright ornery.

The boy who narrates several of the stories is the perfect observer through whose eyes we are allowed to see this old-fashioned world. He has a boy's curiosity and freshness of vision. He is alert and properly inquisitive about the world in which he finds himself. He is an “innocent” in the pristine sense of that word, yet nevertheless a realist. The terms here are not contradictory: the boy has no illusions that the world is less than harsh or that life is easy. The people of the stories are never far away from real hunger. They live far below what we now know as the poverty line, but that circumstance has not destroyed their basic good humor or sense of hope. All of them seem to find life good and living a joy.

What one notices at once is the language used in these stories. It is idiomatic, highly concrete, richly metaphoric, and has the true lilt of oral speech. It is not precisely the dialect that Faulkner's novels have made familiar to so many twentieth-century readers, for it has its own peculiar characteristics. Yet there is a large overlap with Faulkner's and with the “Southern” dialect in general.

“Nary” for “never a,” for example, is common among the country people throughout the South. So is “hit” for “it”âa survival of the Anglo-Saxon formâamong the folk, black and white. So also is the occasional survival of obsolete forms like “boughten” for “bought.” (Robert Frost's old-fashioned New Englanders also use it: see his brilliant little poem “Provide, provide.”) Another feature of this dialect is its preference for compound terms like “gamble cards,” “lie-tale,” and “sun-ball,” “moon-ball,” and “earth-ball.”

Yet Still is sensible in not requiring that his readers struggle
through a thicket of dialect spellings, with elisions and dropped letters marked by inverted commas. For instance, he does not even indicate the dropped
g's
in such words as “going,” “doing,” and “living,” though one may be sure that the dropped form is general among his speakers. As their rimes show, even Wordsworth, Coleridge, Byron, Shelley, and Keats dropped their
g
's. In fact, the dropping was general in English until the Victorian schoolmarm restored the
g
sound under the influence of the spelling.

To give the flavor of the dialect, Still is content to rely on the use of occasional dialect words such as “mort” or “bunty” or “roust,” plus folk expressions such as “I'm a hicker-nut hard to crack,” or “couldn't make a hum-bird a living,” or “it would take Adam's grands and greats to rid that ground.” One must not assume, however, that these Southern highlanders have either debased the English language or coined a new language all their own.

Many of their peculiar words go back to older forms of the standard language or to the British county dialects. Consider the three words I have instanced above. “Mort,” meaning a great deal of something, is characterized by the
OED
as “dialectal”; Dickens has one of his characters use it in
David Copperfield.
“Bunty” seems to be derived from “bunting,” meaning “swelling or plump.” The Scottish antiquary Robert Jamieson cited its use by the folk of Roxburghshire who called a plump child a “buntin brat.” “Roust” in the sense of “rout out” is again characterized by the
OED
as “dial. and U.S.” So it goes.

The ordinary reader, of course, will hardly be disposed to look up such words in the
OED
or in the special dialect dictionaries, nor need he do so in order to enjoy these stories. The context will usually indicate the basic meaning. Furthermore, the derivation of many of these expressions is transparent. Thus “whiter than a hen and biddy dish” obviously refers to a white china dish, the cover of which is shaped like a hen brooding her chicks, the “biddies,” one or two of which are usually represented peeping out from under
her feathered body. When Peep Eye asks “Air you been dranking john corn?” she is referring to whiskey, which in Burns's Scotland was called “John Barley Corn.” But barley was not the grain used in the Kentucky mountains. It was plain corn (maize); hence “barley” properly dropped out.

Why do I put such emphasis on Still's language? Because it is central to what his stories so powerfully render: the ways of a culture which sharply differs from that of twentieth-century urban America. Any culture is most deeply and sensitively reflected in its language. There we find the expression of its central concepts and its basic modes of feeling. If we are to be given an insider's view of that cultureâthat is, if we are to be made to experience it as the person within it does, we must enter it through his language.

I remember having witnessed in Chicago thirty-odd years ago a play about mountain folk of North Carolina. It may have been originally written from an insider's point of view, but once it was deemed to have possibilities for a Broadway production, the play doctors got to it and “improved” it for the benefit of the urban outsider. The play now stressed the quaintness, bawdy realism, and provincial depravity of its characters. The aim became titillation at the bizarre speech and sexual activities of a culture to be viewed as comically decadent.

There is no nonsense of this sort in
The Run for the Elbertas.
The people in these stories take their culture for granted, for they obviously know no other.

The real weakness of the old local color fiction of the 1880â1910 era derived from its condescending attitude toward the regional characteristics that the author undertook to exploit. The local colorist played up what would appear quaint or funny or at any rate outlandish. He was the spielman for a rubberneck bus taking tourists through the hinterland. His job was to amuse the sophisticated by exhibiting the antics of the natives. In short, he could not afford to take his characters seriously as human beings in their own right. James Still does not make this mistake.

Speaking for the moment personally, I was born in Kentucky and lived there during some highly impressionable years. My home was in the western tip of the state, about as far from James Still's mountains as a fellow Kentuckian could get. Yet many of the customs, superstitions, and folkways that Still mentions are familiar to me. I have seen a person “walk his chair” across a room. (By shifting your weight you can teeter a straight chairânot a rockerâacross the floor without ever completely rising from it.) I learned to blow soap bubbles by using a discarded spool as a blowpipe just as children on Troublesome Creek do. As a boy I learned to “rooster fight.” “Hollow tail,” that mythical disease afflicting milch cattle, was diagnosed in one of my father's cows. The “dumb bull,” described in the story “On Quicksand Creek,” was new to me, but I had heard of the “tick tack,” that minor instrument of the devil which could be used to scare a cantankerous neighbor.

The stories in this volume are indeed stories, with simple but adequate plots, a due measure of suspense, and an interesting variety of characters. In those stories narrated by the boy, things, good and bad, happen to his family and happen to the boy as he grows toward an adult's possession of his world. These stories thus make up a modest
Bildungsroman,
a mode that has clearly provided some of the best fiction in the whole range of American literature. One thinks immediately of Twain's Huck Finn, or Hemingway's Nick Adams, or Faulkner's young Isaac McCaslin, or Sherwood Anderson's Kentucky boy who is the narrator of “I Want to Know Why.” Still has made a worthy contribution to this genre.