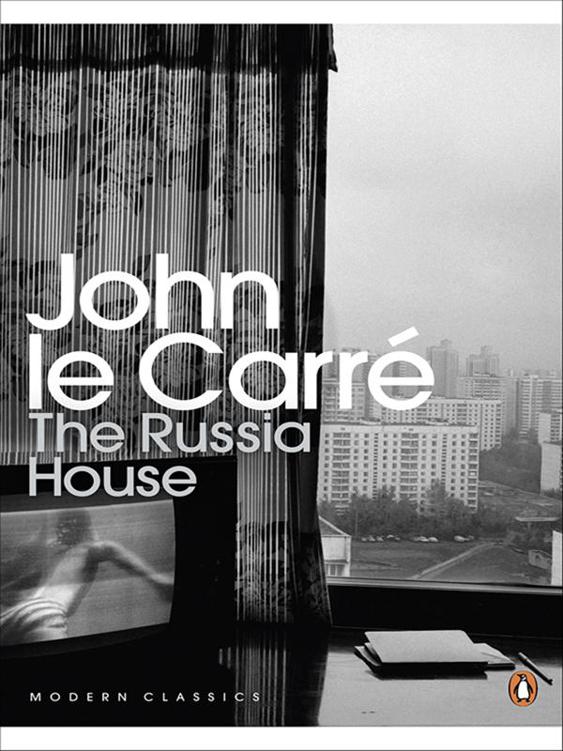 with an Afterword by the author

John le Carré was born in 1931. His third novel,
The Spy Who Came in from the Cold
, secured him a worldwide reputation, which was consolidated by the acclaim for his trilogy
Tinker, Tailor, Soldier, Spy, The Honourable Schoolboy
and
Smiley’s People
. His later novels include
The Constant Gardener, Absolute Friends, The Mission Song
and
A Most Wanted Man. Our Kind of Traitor
is his most recent novel.

For Bob Gottlieb, a great editor
and a long-suffering friend

‘Indeed, I think that people want peace so much that one of these days governments had better get out of their way and let them have it.’

Acknowledgements in novels can be as tedious as credits at the cinema, yet I am constantly touched by the willingness of busy people to give their time and wisdom to such a frivolous undertaking as mine, and I cannot miss this opportunity to thank them.

I recall with particular gratitude the help of Strobe Talbott, the illustrious Washington journalist, Sovietologist and writer on nuclear defence. If there are errors in this book they are surely not his, and there would have been many more without him. Professor Lawrence Freedman, the author of several standard works on the modern conflict, also allowed me to sit at his feet, but must not be blamed for my simplicities.

Frank Geritty, for many years an agent of the Federal Bureau of Investigation, introduced me to the mysteries of the lie-detector, now sadly called the polygraph, and if my characters are not as complimentary about its powers as he is, the reader should blame them, not him.

I must also offer a disclaimer on behalf of John Roberts and his staff at the Great Britain-USSR Association, of which he is Director. It was he who accompanied me on my first visit to the USSR, opening all sorts of doors for me that might otherwise have stayed shut. But he knew nothing of my dark intent, neither did he probe. Of his staff, I may mention particularly Anne Vaughan.

My Soviet hosts at the Writers’ Union showed a similar discretion, and a largeness of spirit that took me by surprise. Nobody who visits the Soviet Union in these extraordinary years, and is privileged to conduct the conversations that were granted me, can come away without an enduring love for its people and a sense of awe at the scale of the problems that face them. I hope that my Soviet friends will find reflected in this fable a little of the warmth that I felt in their company, and of the hopes we shared for a saner and more companionable future.

Jazz is a great unifier and I did not want for friends when it came to Barley’s saxophone. Wally Fawkes, the celebrated cartoonist and jazz player, lent me his musician’s ear, and John Calley his perfect pitch both in words and music. If such men would only run the world I should have no more conflicts to write about.

In a broad Moscow street not two hundred yards from the Leningrad station, on the upper floor of an ornate and hideous hotel built by Stalin in the style known to Muscovites as Empire During the Plague, the British Council’s first ever audio fair for the teaching of the English language and the spread of British culture was grinding to its excruciating end. The time was half past five, the summer weather erratic. After fierce rain showers all day long, a false sunlight was blazing in the puddles and raising vapour from the pavements. Of the passers-by, the younger ones wore jeans and sneakers, but their elders were still huddled in their warms.

The room the Council had rented was not expensive but neither was it appropriate to the occasion. I have seen it – Not long ago, in Moscow on quite another mission, I tiptoed up the great empty staircase and, with a diplomatic passport in my pocket, stood in the eternal dusk that shrouds old ballrooms when they are asleep – With its plump brown pillars and gilded mirrors, it was better suited to the last hours of a sinking liner than the launch of a great initiative. On the ceiling, snarling Russians in proletarian caps shook their fists at Lenin. Their vigour contrasted unhelpfully with the chipped green racks of sound cassettes along the walls, featuring
Winnie-the-Pooh
and
Advanced Computer English in Three Hours
. The sackcloth sound-booths, locally procured and lacking many of their promised features, had the sadness of deck chairs on a rainy beach. The exhibitors’ stands, crammed under the shadow of an overhanging gallery, seemed as blasphemous as betting shops in a tabernacle.

Nevertheless a fair of sorts had taken place. People had come, as Moscow people do, provided they have the documents and status to satisfy the hard-eyed boys in leather jackets at the door. Out of politeness. Out of curiosity. To talk to Westerners. Because it is there. And now on the fifth and final evening the great farewell cocktail party of exhibitors and invited guests was getting into its stride. A handful of the small
nomenclatura
of the Soviet cultural bureaucracy was gathering under the chandelier, the ladies in their beehive hairstyles and flowered frocks designed for slenderer frames, the gentlemen slimmed by the shiny French-tailored suits that signified access to the special clothing stores. Only their British hosts, in despondent shades of grey, observed the monotone of socialist austerity. The hubbub rose, a brigade of pinafored governesses distributed the curling salami sandwiches and warm white wine. A senior British diplomat who was not quite the Ambassador shook the better hands and said he was delighted.

Only Niki Landau among them had withheld himself from the celebrations. He was stooped over the table in his empty stand, totting up his last orders and checking his dockets against expenses, for it was a maxim of Landau’s never to go out and play until he had wrapped up his day’s business.

And in the corner of his eye – an anxious blue blur was all that she amounted to – this Soviet woman he was deliberately ignoring.
Trouble
, he was thinking as he laboured.
Avoid.

The air of festivity had not communicated itself to Landau, festive by temperament though he was. For one thing, he had a lifelong aversion to British officialdom, ever since his father had been forcibly returned to Poland. The British themselves, he told me later, he would hear no wrong of them. He was one of them by adoption and he had the poker-backed reverence of the convert. But the Foreign Office flunkeys were another matter. And the loftier they were, and the more they twitched and smirked and raised their stupid eyebrows at him, the more he hated them and thought about his dad. For another thing, if he had been left to himself, he would never have come to the audio fair in the first place. He’d have been tucked up in Brighton with a nice new little friend he had, called Lydia, in a nice little private hotel he knew for taking little friends.

‘Better to keep our powder dry till the Moscow book fair in September,’ Landau had advised his clients at their headquarters on the Western by-pass. ‘The Russkies love a book, you see, Bernard, but the audio market scares them and they aren’t geared for it. Go in with the book fair, we’ll clean up. Go in with the audio fair, we’re dead.’

But Landau’s clients were young and rich and did not believe in death. ‘Niki boy,’ said Bernard, walking round behind him and putting a hand on his shoulder, which Landau didn’t like, ‘in the world today, we’ve got to show the flag. We’re patriots, see, Niki? Like you. That’s why we’re an offshore company. With the
glasnost
today, the Soviet Union, it’s the Mount Everest of the recording business. And you’re going to put us on the top, Niki. Because if you’re not, we’ll find somebody who will. Somebody younger, Niki, right? Somebody with the drive and the class.’

The drive Landau had still. But the class, as he himself was the first to tell you, the class, forget it. He was a card, that’s what he liked to be. A pushy, short-arsed Polish card and proud of it. He was Old Nik the cheeky chappie of the Eastward-facing reps, capable, he liked to boast, of selling filthy pictures to a Georgian convent or hair tonic to a Rumanian billiard ball. He was Landau the undersized bedroom athlete, who wore raised heels to give his Slav body the English scale he admired, and ritzy suits that whistled ‘here I am’. When Old Nik set up his stand, his travelling colleagues assured our unattributable enquirers, you could hear the tinkle of the handbell on his Polish vendor’s barrow.

And little Landau shared the joke with them, he played their game. ‘Boys, I’m the Pole you wouldn’t touch with a barge,’ he would declare proudly as he ordered up another round. Which was his way of getting them to laugh with him. Instead of at him. And then most likely, to demonstrate his point, he would whip a comb from his top pocket and drop into a crouch. And with the aid of a picture on the wall, or any other polished surface, he’d sweep back his too-black hair in preparation for fresh conquest, using both his little hands to coax it into manliness. ‘Who’s that comely one I’m looking at over there in the corner, then?’ he’d ask, in his godless blend of ghetto Polish and East End cockney. ‘Hullo there, sweetheart! Why are we suffering all alone tonight?’ And once out of five times he’d score, which in Landau’s book was an acceptable rate of return, always provided you kept asking.

But this evening Landau wasn’t thinking of scoring or even asking. He was thinking that yet again he had worked his heart out all week for a pittance – or as he put it more graphically to me, a tart’s kiss. And that every fair these days, whether it was a book fair or an audio fair or any other kind of fair, took a little more out of him than he liked to admit to himself, just as every woman did. And gave him a fraction too little in return. And that tomorrow’s plane back to London couldn’t come too soon. And that if this Russian bird in blue didn’t stop insinuating herself into his attention when he was trying to close his books and put on his party smile and join the jubilant throng, he would very likely say something to her in her own language that both of them would live to regret.

That she was Russian went without saying. Only a Russian woman would have a plastic perhaps-bag dangling from her arm in readiness for the chance purchase that is the triumph of everyday life, even if most perhaps-bags were of string. Only a Russian would be so nosy as to stand close enough to check a man’s arithmetic. And only a Russian would preface her interruption with one of those fastidious grunts, which in a man always reminded Landau of his father doing up his shoe laces, and in a woman, Harry, bed.

The Color Of Night by Lindsey, David
Wild Sky 2 by Suzanne Brockmann, Melanie Brockmann
The Light (Morpheus Road) by D.J. MacHale
Action Figures - Issue Two: Black Magic Women by Michael Bailey
Tessa and the Warden by Veatch, Elizabeth A., Smith, Crystal G.
The World at the End of Time by Frederik Pohl
The Pleasure of Bedding a Baroness by Lejeune, Tamara
Into the Wilderness: Blood of the Lamb (Book Two) by Mandy Hager
Parlor Games by Maryka Biaggio
Island of Shadows by Erin Hunter