Read The Sea and Civilization: A Maritime History of the World Online

The Sea and Civilization: A Maritime History of the World 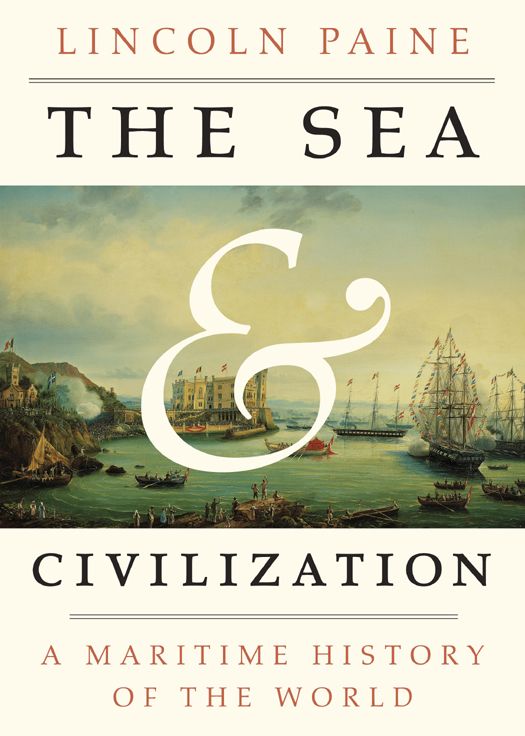 All rights reserved. Published in the United States by Alfred A. Knopf, a division of Random House LLC, New York, and in Canada by Random House of Canada Limited, Toronto, Penguin Random House Companies.

Knopf, Borzoi Books, and the colophon are registered trademarks of Random House LLC

Now one day, as I was sitting with Abu ’Ali bin Hazim and looking at the sea—we were on the shore at ’Adan—said he to me: “What is it with which you seem to me to be so preoccupied?”

Said I: “God support the Shaykh! My mind is perplexed concerning the sea, so great is the number of conflicting accounts of it. The Shaykh now is the most knowledgeable of men about it, because he is chief of the merchants, and his ships are continually traveling to the furthermost parts of it. Should he be willing to give me a description of it I can rely on, and relieve me of doubt about it, perhaps he will do so.”

Said he: “You have encountered an expert in the matter!” He smoothed the sand with the palm of his hand and drew a figure of the sea on it.

A Note on Measures

1   Taking to the Water
2   The River and Seas of Ancient Egypt
3   Bronze Age Seafaring
4   Phoenicians, Greeks, and the Mediterranean
5   Carthage, Rome, and the Mediterranean
6   Chasing the Monsoons
7   Continent and Archipelagoes in the East
8   The Christian and Muslim Mediterranean
9   Northern Europe Through the Viking Age
10   The Silk Road of the Seas
11   China Looks Seaward
12   The Medieval Mediterranean and Europe
13   The Golden Age of Maritime Asia
14   The World Encompassed
15   The Birth of Global Trade
16   State and Sea in the Age of European Expansion
17   Northern Europe Ascendant
18   “Annihilation of Space and Time”
19   Naval Power in Steam and Steel
20   The Maritime World Since the 1950s

Boats of the Friendly Islands
, by John Webber

The oldest image of a sail, on the Naqada/Gerzean vase

The return of Hatshepsut’s ships from Punt

A Mesopotamian cylinder seal and the sealing it makes

The Magan Boat replica from Oman

Early Minoan terra-cotta “pan” from the island of Syros

The flight of Luli from Tyre to Cyprus

A ship arriving at Ostia

Louchuan
from the
Collection of the Most Important Military Techniques

Trackers towing a riverboat on the Yangzi

Ship from the Dunhuang cave complex in central China

“The Bay and Strait of Gibraltar,” by Carel Allard

A bas-relief from the temple at Borobudur in central Java

The
Samudra Raksa
, a ship based on bas-reliefs at Borobudur

A sailing ship from the Bayon temple at Angkor Thom, Cambodia

A paddled vessel from the Bayon temple at Angkor Thom, Cambodia

Seal of the city of Lübeck

Map of the China Seas from Linschoten’s
Itinerario

Peter Pett and the
Sovereign of the Seas, by Sir Peter Lely

Description of the slave ship
Brooks

The
Tusitala
and
Berengaria
outward bound from New York

The battleship USS
Arizona
passing through the Panama Canal

LSTs at Leyte Island, the Philippines

1. An Egyptian faience plate decorated with a papyrus raft

2. Minoan ship mural from the island of Thera (Santorini)

3. A pirate’s bireme bearing down on a sailing merchantman

4. The port of Carthage

6. Byzantine mosaic of fisherman from Ravenna

9. Shipbuilding scene from the Bayeux Tapestry

11. A passenger-carrying junk at Kaifeng, China

12. A great galley from the shipbuilding treatise by Michael of Rhodes

13.
The Doge of Venice Departing for the Lido in the
Bucintoro by Antonio Canaletto

15. An illustration from a 1341 manuscript of the
Shahnamah

16. A ship taking soundings, from the
Ordonances of Armoury

20. James Gillray’s “John Bull Taking a Luncheon,” after the battle of Aboukir

21.
Giant Demon Attacks a Ship,
from the
Sripal Ras

23. Stephen Bone’s
On Board an S-Class Submarine: Up the Conning Tower

24. The container port of Singapore

25. A huge catch aboard a trawler in the Gulf of Alaska

26. Underway replenishment in the Arabian Sea

Pre-Columbian South America and the Caribbean

From Mesopotamia to the Indus Valley

The Bronze Age Near East

Europe Through the Viking Age

Asia and the Pacific in the Early Modern Period

Asia and the Pacific at the Turn of the Millennium

Pre-Columbian South America and the Caribbean

The Doll Brokers by Hal Ross
Such Is My Beloved by Morley Callaghan
Queen of Clubs (Desert Sons MC Book 2) by Thomas, Kathryn
Off the Grid (Amish Safe House, Book 1) by Ruth Hartzler
Cry Revenge by Donald Goines
Man about the House (Wicked Wraiths) by Carter, Mina
The Scions of Shannara by Terry Brooks
Claude & Camille: A Novel of Monet by Stephanie Cowell
The Rest Falls Away by Colleen Gleason
Paula's Playdate by Nicole Draylock