The Secret Book of Paradys 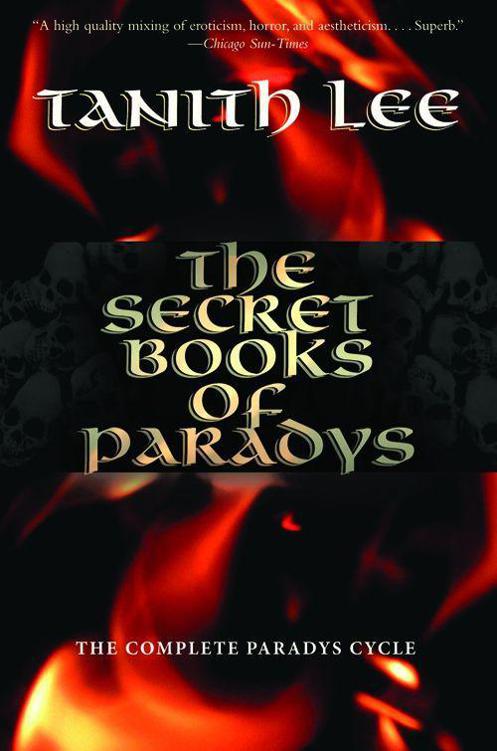 This edition first published in the United States in 2007 by The Overlook Press, Peter Mayer Publishers, Inc.  New York

The Book of the Damned

The Book Of The Beast

Part One:
The Scholar

Part One:
The Roman

The Book of the Dead

Lost in the World

The Moon Is a Mask

The Book of the Mad

Praise for The Secret Books of Paradys

THE BOOK OF THE DAMNED
STAINED WITH CRIMSON
LE LIVRE CRAMOISI

We were young, we were merry, we were very very wise,

And the door stood open at our feast,

When there passed us a woman with the West in her eyes,

And a man with his back to the East.

How fast does a man run, when the Devil is after him?

I was seeing it, but unknowingly, as he came towards me up the cobbled hill, his breath cawing with the effort, his eyes colourless and bright. The afternoon had grown late and the sky rolled with storm clouds. Slanting light, driven down between the cliff-like walls of the Temple-Church of the Sacrifice, gave only greyness to the alleys. I had come from Philippe’s séance dulled, and with immeasurable foreboding, dissatisfaction. And into all this, the storm-light, the stony channel, my vision, the runner ran. His arms were outstretched and his long rags streamed behind him. He seemed to have been clawed by great thorns; hair and clothes. I stepped to one side to let him by. I thought him a madman. Instead, he fell at my feet. “Ah,” he moaned, as if, thirsting, he discovered water, “
aah
.”

I drew back again. His hand clawed after me and gripped my ankle.

“Lean closer,” he answered. “Lean down.”

His voice was cultured, and sounded young, though my impression had been of an old man. The hand was elegantly kept, the nails clean and trimmed. Rings adorned it. Suddenly I imagined him some helpless noble creature set on by scoundrels. I knelt beside him.

“Who attacked you, monsieur?”

He laughed. It was an awful noise, as if his throat had been cut. He turned, and I was gazing into his face. It was the countenance of a man in early middle life, no more. How had the other idea got hold of me? And he was handsome.

“Ssh,” he said, soothing me. Then he laughed again, softly. “Young man,” he said, “I am
so
glad to have found you. Ah yes. Now I will give you the secret of life. Do you want it?”

“Who does not?” I took his words for a joke, though he lay on the cobbles before me.

“Oh, perhaps. Here is my other hand. Open it.” He offered me a closed fist. “I can’t unclench the fingers,” he said. “You must do it.”

I was bemused by now. I took his fist in both hands and prised it open, which was not easy. There in the palm was another ring, that burned in the half-light a deep smooth red, like a drop of syrup. Yet the boss, highly polished, had also been engraved. Something insectile it would seem to be.

“Nothing more. Andre St Jean. That is all. Let me help you up. Where did you mean to go?”

“Away,” he said. And abruptly he was scrambling to his knees; next to get upright. I assisted him as best I could. Then he sprang forward, away from me. I called after him, but he only turned back to me the profile of his madman’s face and gave a raw snarl that might have been amused hatred or simply terror. He was old again, an ancient lunatic escaped from some hospital, with bits of wire wound on his knotted hands. He rushed flapping and flailing up Sacrifice Hill, and was gone into the dark stone ditches under the church.

An urge came on me to hurl after him the thing he had given me. What could it be but a gaud of glass, or something much worse. But I stole a look at it again, and it had remained immutable. A huge polished ruby, incised with a snub-headed insect of folded wings. I closed my hand on it in a sort of spasm.

The encounter had unnerved me. I leaned on one of the blind walls by me, my head full of gentle buzzings. What was he fleeing from? Oh, pursuit, of course. His keepers must be after him. Or he had robbed someone of the jewel, and the City police were on his track.

The rain began a moment later, a thousand stilettos flung into the street, over and over. The rain would revive me, probably.

When I heard the shadow, I raised my head. I had expected the pursuit, but not the shape it took.

Two black dogs, lean and long, with jackals’ pointing heads, came loping up the cobbles through the rain, slick and wet, altogether like basalt. They barely glanced at me. They went swiftly by, and it seemed to me I felt their
heat dinning through the chilly air. After them rode a man on a black horse. He was cloaked in black and cowled against the rain, like a priest. But he, as he drew level with me, paused. Through the water, against the black of the hood, I saw his pale face, and the black eyes that fixed on me and seemed to impel the heart out of my body.

His voice was quiet, but it reached me easily. It was the voice of music, and its colour too was black.

“Yes,” I said. I lifted my hand to point, or to show him the ring, which must be his, but in that instant he turned his face from me, and lightly touching his horse with the spur, set it racing over the stones.

He was gone. The air seemed cold as iron. I wondered if I would follow, to see what happened, if he would catch up to the other. I had a notion now the lunatic fled to the Temple-Church for sanctuary, but that it would do him no good. The desire to go after the rider, to make him speak again, perhaps to insult him or somehow draw him out, was very strong. But I had not liked the look of the dogs he did his hunting with in the lanes of Paradys. No, it would be better to go home.

I was turning down into the old market, when I thought I heard a thin high terrible screaming, far off, back up the hill.

Since ten in the morning I had been in the house of crazy Philippe, where the séance had been held with such pomp. It led to all types of manifestation, attractive rotten things, like death-bed lilies. The furniture had moved, a decanter smashed; a naked ghost-child appeared to prophesy – stupidities that were certainly faked, or induced by the energy of suggestion. But it had left me sensitive, left me wanting, in need of a supernatural completion as in need of food or sex or sleep.

What then had I been a witness to? A running man, a riding man, two striding dogs. And had I even heard those dreadful cries behind me?

I stood in the rain below the steps, wondering if he would come back, Satan, Prince of Darkness, on the night-black mare, the broken body of his victim flung casually across the saddle. But no one came except a woman of the alleys, who wished me good-day, looking slyly to see if I would go after her to her lodging.

Stumbling, shivering, I turned for my own.

Philippe, Le Marc, Russe, and some others stood in the street shouting up at my window.

I opened it, and looked down.

The bell was ringing midnight from Our Lady of Ashes across the river. A howling dark, with intervals of deaf stillness. The candlelight touched their faces oddly, making them look mad or damned, the very things they strove to be.

“Regard him!” Le Marc cried in turn, of me, “death’s-head with a book. Come down, corpse, and be happy. Despair is so sensuous, so delicious, it will wear you out.”

“He is sulking,” said Philippe, “because the little ghost-maiden didn’t sit on his lap.”

“Go with your legions to hell,” said I.

They clamoured at the outer door until my landlady trudged up the house and admonished me at the inner one. To keep the peace, I descended. And because, of course, I had nothing better or worse to do.

We went to the
Iron Bowl
, and later to the
Cockatrice
, drinking, drinking. The red wine that opens the eyes, and the black brandy that blinds you.

“He’s still wearing that ring. Look. Three whole weeks. It must be some token.”

“You are a fool,” said Russe, going back by the wine to the sombre forests of his blood. “Some cut-throat will have your finger off for that one night, when you’re sprawled in some alley.”

“The left hand,” said Philippe. “He doesn’t care what happens to that. As long as the right hand can write.”

I gazed at the red ring, the ruby, with the beetle engraved on it.

“Who gave it you?” said Philippe. He smiled. “I know who would like it.”

“Philippe, you know everything, why do you bother with us?” said Le Marc.

“What Devil?” I said, feeling my blood on its path turn and rise and move another way.

“It is the Devil’s ring,” said Russe. “I never saw anything so clearly. Let a thief steal it. It will bring you sorrow, and horror.”

“What’s new?” I said. I put my head on my arms on the table. Philippe stroked my hair, long as the fashion now was in the City of Paradys, and hennaed “Martian” red, since the fashion too was for such colourings. Blond Philippe, a Narcissus, a snow-chrysanthemum from birth, laughed in my ear. “Don’t you want to know whose ring it really is?”

“A most beautiful woman.”

“Not tonight, you are too drunk tonight, and it is too late tonight. Tomorrow we will go to her. And you shall return her the ring. The most beautiful woman in Paradys.”

“Oh, I heard of her. Yes. He lets her hold her salon, like the other empresses of the City. But they are foreigners.”

Nearly asleep, I swam through my skull, and sometimes listened.

Philippe and Le Marc half carried me home.