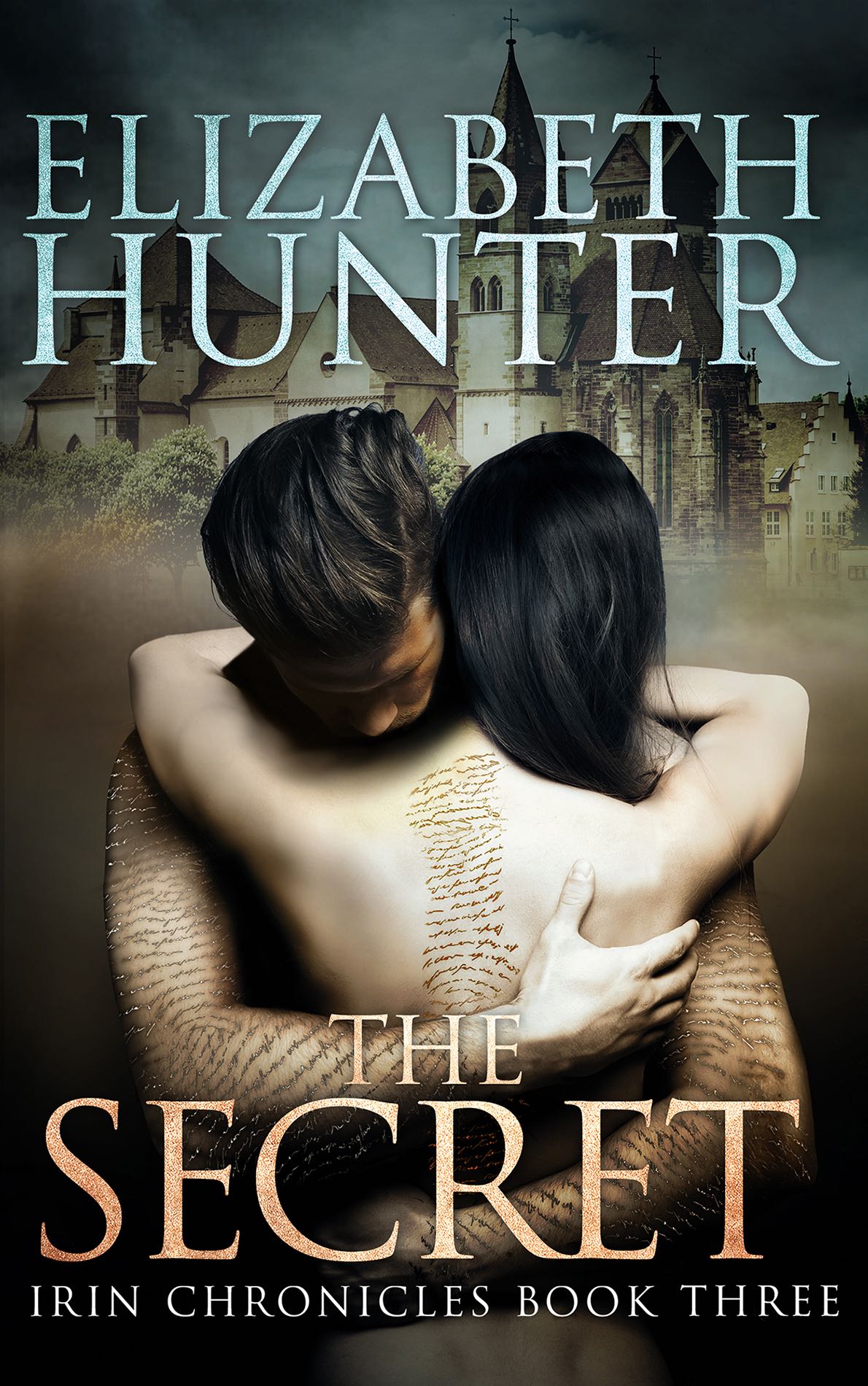 Letter from the author

Praise for the Irin Chronicles

Only when the darkness falls can you see the light of the stars.

For thousands of years, the scribes and singers of the Irin race have existed to protect humanity and guard the gifts of the Forgiven. They have lived in the shadows. They have kept their secrets.

But the Irin aren’t the only race with secrets.

Ava and Malachi have survived the darkness, but will they ever discover the light? A powerful cabal of the Fallen may hold the answers, but to surrender them, it wants the Irin race to finally face their enemies. Both those coming from the outside and those raging within.

The Secret
is the third book in the contemporary fantasy series, the
Irin Chronicles
, and the conclusion of Ava and Malachi’s journey.

All rights reserved. No part of this book may be used or reproduced by any means, graphic, electronic, or mechanical, including photocopying, recording, taping, or by any information storage retrieval system without the written permission of the publisher except in the case of brief quotations embodied in critical articles and reviews.

This is a work of fiction. Names, characters, places, and incidents are the products of the author’s imagination or are used fictitiously. Any resemblance to actual persons, living or dead, business establishments, events, or locales is entirely coincidental.

This e-book is licensed for your personal enjoyment only. This e-book may not be resold or given away to other people. If you would like to share this book with another person, please purchase an additional copy for each recipient. If you’re reading this book and did not purchase it, or it was not purchased for your use only, then please delete it and purchase your own copy from an authorized retailer. Thank you for respecting the hard work of this author.

Thank you for showing me what love

Every day of my life.

They took and brought me to a place in which those who were there were like flaming fire,

and when they wished, they appeared as men.

They brought me to the place of darkness,

and to a mountain, the point of whose summit reached to heaven.

And I saw the places of the luminaries and the treasuries of the stars,

and of the thunder,

and of the uttermost depths
.

The Book of Enoch
,
Chapter Seventeen

She might see his shape, but often the angel was only a presence lurking on the edges of her mind.

This night, her mate was beside her and the angel’s dark form walked at her side, his presence tangible. His power muted.

“Why do you visit me like this?” she asked him.

“Because I want to.”

“There is another reason.”

“If I am here, then the other cannot be.”

She glanced at the warrior beside her. “But
he
is here.”

“He belongs here. The other does not.”

A tendril of anger threaded through her dream. “I don’t understand you.”

“Why can’t he hear you? See you?” She glanced at the warrior. In the low light, his
talesm
glowed with a silver sheen. He didn’t touch her, but she felt his presence as if the whole of him were wrapped around the ephemeral thought of her, anchoring her mind to her body.

She would drift away without him.

“Your mate is not mine as you are.”

“I don’t know what that means.”

The dark angel paused. “Soon. You will know soon.”

They walked, and the night grew darker. Colder. She shivered, and her
reshon
reached out, taking her hand in his. That was all he did, but the cold fled and she was drawn into his light. The mating marks on her arms lit. Her shoulders grew warm, and the fog that surrounded them grew thinner.

The angel stopped, so she did too. He stepped closer, until his face was lit by the light that glowed from her body. Her own marks. Before her, he grew. And he was not a man. He was more, but she was no longer frightened.

“This is how it should be,” he said, one hand hovering over her rune-marked shoulder. “Thousands of years, and I finally understand.”

She felt her mate draw closer, but the dark angel held up a hand. He was forced to retreat. The scribe said something she did not hear because her eyes were locked on the familiar gold gaze of a man who was not a man.

“I want you to remember now.”

He sent an image to her, but it was not one of the visions that were familiar and frightening. It was a narrow room, and two men were there with a woman. With
her
. One sat next to her. The other in a corner.

This is a memory. This is mine.

“You are… Irin scribe house.”

“Did you think the angels—”

SHE woke with a sharp breath, sitting up as her eyes flew open. Malachi was beside her, his hand on her arm. It was early morning, and grey light shone around the corners of the curtains in the house by the sea. The room was cold, but she was covered in a sheen of sweat.

“Was it Jaron again?”

She took a soothing breath as he pulled her into his arms. She no longer had to ask. He no longer hesitated.

In the month since he’d come back to her, they’d grown more familiar, though they still handled each other with care. Malachi was cautious about certain topics. Their past in Istanbul was safe. Their months apart were not.

Part of Ava felt as if she’d woken from a nightmare when Malachi came back.

The other part waited in terror to wake from the dream of him being alive.

“Better?” he whispered into her hair.

“Yes.” She breathed again, closing her eyes and listening to the steady surf in the background. “Yes, better.”

He held her against the solid wall of his chest, anchoring her to his body, holding her in the circle of his arms.

Some mornings Ava woke feeling as if she could drift away. She was smoke on those mornings. The thin fog that hung over the ocean in the moonlight. They clung to each other in sleep, no matter what had happened during the day or how distant she felt.

Sometimes she woke and he was watching her, frowning as if he was trying to remember.

On the best mornings, she woke and Malachi was the man he had been, light in his eyes and a teasing smile at the corner of his mouth. They made love on those mornings with playful passion. The joy of new lovers in familiar skin, hiding away in his grandparents’ house on the edge of the sea.

On those mornings, they didn’t speak of the other times he woke her. The hours when she cried in her sleep. Stifling screams. Weeping with remembered loss. In the bleak darkness of those nights, they held each other desperately.

Once, she bit his shoulder hard enough to break skin, and the taste of his blood had lingered in her mouth for days.

And in the mornings, she believed him.

But the nights always came. The dark angel walked with Ava in her dreams, and she woke crying, seeing Malachi’s face dissolve into gold dust that rose in the damp air of the cistern where he had died.

Rhys paused on the other end of the phone call. “But you’re back.”

“Her mind knows that. But there are moments when I think her heart forgets.”

Malachi held the phone to his ear while he watched his mate take pictures near the shore. His grandparents’ house sat on the ocean north of Hamburg, hugging the edge of the North Sea. It was bitterly cold in the middle of winter.

Malachi craved the warmth of southern waters, but Ava resisted a return to Istanbul no matter how Rhys and Leo reassured her.

His brothers called every week and asked the same questions.

Had any more of his
talesm
returned?

Malachi continued to remember in scattered bits, but nothing like the full recovery they’d hoped for when he and Ava reunited. His
talesm
were stalled. They were nowhere near a scribe house where he could perform the rituals correctly, and none of his previous tattoos had reappeared as they had for a while during their dream-walks.

Ava refused to use her magic.

“Have you asked her about going to Vienna?”

“She keeps saying ‘later.’ She’ll go later. We were going to go when her father performed there, but she changed her mind at the last minute. Said she wanted to have more time with just the two of us.”

Malachi shook his head. “That’s not the reason, Rhys.”