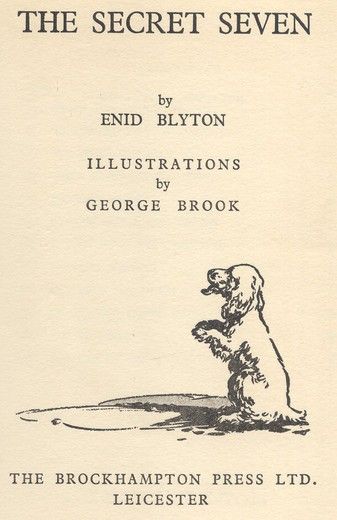 4 – What Happened to Jack

6 – Finding Out a Few Things

7 – A Talk With the Caretaker

«We'd better have a meeting of the Secret Seven», said Peter to Janet. «We haven't had one for ages.»

«Oh, yes, let's!» said Janet, shutting her book with a bang. «It isn't that we've forgotten about the Society, Peter – it's just that we've had such a lot of exciting things to do in the Christmas holidays we simply haven't had time to call a meeting.»

«But we must», said Peter. «It's no good having a Secret Society unless we use it. We'd better send out messages to the others.»

«Five notes to write», groaned Janet. «You're quicker at writing than I am, Peter – you write three and I'll write two.»

«Yes, I know you'd love to write one, too, if you could», said Janet, patting the silky golden head. «You can carry one in your mouth to deliver. That can be your job, Scamper.»

«What shall we say?» said Peter, pulling a piece of paper towards him and chewing the end of his pen as he tried to think of words.

«Well – we'd better tell them to come here, I think», said Janet. «We could use the old shed at the bottom of the garden for a meeting-place, couldn't we? Mummy lets us play there in the winter because it's next to the boiler that heats the greenhouse, and it's quite warm.»

«Right», said Peter, and he began to write. «I'll do this message first, Janet, and you can copy it. Let's see – we want one for Pam, one for Colin, one for Jack, one for Barbara – who's the seventh of us? I've forgotten.»

«George, of course», said Janet. «Pam, Colin, Jack, Barbara, George, you and me – that's the seven – the Secret Seven. It sounds nice, doesn't it?»

The Secret Seven Society was one that Peter and Janet had invented. They thought it was great fun to have a little band of boys and girls who knew the password, and who wore the badge – a button with S.S. on.

«There you are», said Peter, passing his sheet of paper to Janet. «You can copy that.»

Janet read what Peter had written: “IMPORTANT. A meeting of the Secret Seven will be held tomorrow morning in the shed at the bottom of our garden at 10 o'clock. Please give PASSWORD.”

«Oh, I say – what was the last password we had?» said Janet in alarm. «It's so long since we had a meeting that I've forgotten.»

«Well, it's a good thing for you that you've got me to remind you», said Peter. «Our latest password was Wenceslas, because we wanted a Christmassy one. Fancy you forgetting that!»

«Oh, yes, of course. Good King Wenceslas», said Janet. «Oh, dear – now I've gone and made a mistake in this note already. I really mustn't talk while I'm doing it.»

There was a silence as the two of them wrote their notes. Janet always wrote with her tongue out, which made her look very funny. But she said she couldn't write properly unless her tongue was out, so out it had to come.

Peter finished first. He let Scamper lick the envelopes. He was good at that; he had such a nice big wet tongue.

«You're a very licky dog», said Peter, «so you must be pleased when you have things like this to lick. It's a pity we're not putting stamps on the letters, then you could lick those, too.»

«Now shall we go and deliver the secret messages?» said Janet. «Mummy said we could go out; it's a nice sunny morning – but won't it be cold!»

«Woof! woof!» said Scamper, running to the door when he heard the word “out”. He pawed at the door impatiently.

Soon the three of them were out in the frost and snow. It was lovely. They went to Colin's first. He was out, so they left the note with his mother.

Then to George's. He was in, and was very excited when he heard about the meeting to be held in the shed.

Then to Pam's. Jack was there too, so Peter left two notes. Then there was only Barbara left. She was away!

«Bother!» said Peter. But when he heard she was coming back that night he was pleased. «Will she be able to come and see us tomorrow morning?» he asked Barbara's mother, and she said yes, she thought so.

«Well, that's all five», said Janet as they turned to go home. «Come on, Scamper. We'll go, for a slide on the pond. The ice is as thick as anything!»

They had a lovely time on the pond, and how they laughed at poor Scamper! His legs kept sliding out from under him in all directions as he tried to run on the ice. In the end he slid along on his back, and the children, weak with laughing, had to haul him off the pond.

Scamper was cross. He turned and growled at the pond. He didn't understand it at all. He could drink it in the summer, and paddle in it – now look at it! Something queer had happened, and he didn't like it.

That afternoon the two children and Scamper went down to the old shed. It was warm, because the boiler was going well nearby to heat the big greenhouse. Peter looked round.

«It feels quite cosy. Let's arrange boxes for seats – and get the old garden cushions out. And we'll ask Mummy if we can have some lemonade or something, and biscuits. We'll have a really proper meeting!»

They pulled out some boxes and fetched the old cushions. They laid sacks on the ground for a carpet, and Janet cleaned a little shelf to put the lemonade and biscuits on, if their mother let them have them.

«There are only five boxes that are sittable on», said Peter. «Someone will have to sit on the floor.»

«Oh, no – there are two enormous flower-pots in the corner over there», said Janet. «Let's drag them out and turn them upside down. They'll be fine to sit on then.»

So, with the five boxes and the two flower-pots, there were seats for everyone.

«I'm going to draw two big letter S's», said Peter, «and colour them green – cut them out, mount them on cardboard, and then stick them to the door of the shed.»

The next morning five children made their way to Old Mill House, where Peter and Janet lived. It took its name from the ruined mill that stood up on the hill, some distance away, which had not been used for many years.

George came first. He walked down the garden and came to the shed. The first thing he saw was the sign on the door, S.S. There it was, bold and clear in bright green.

He knocked on the door. There was a silence. He knocked again. Still no reply, though he felt sure that Peter and Janet were there because he was certain he had seen Janet's face at the little window of the shed.

He heard a snuffling under the door. That must be Scamper! He knocked again, impatiently.

The door opened at once. George grinned and went in. He looked round. «I say – this is jolly cosy. Is it to be our meeting-place these hols?»

«You're not a very good member», said Janet sternly. «Forgetting to say the password, and forgetting your badge as well.»

«Sorry», said George. «To tell you the truth I'd almost forgotten about the Secret Society too!»

«Well, you don't deserve to belong then», said Peter.

«Just because we haven't met for some time! I do think – »

There was another knock at the door. It was Pam and Barbara. There was silence in the shed. Everyone was listening for the password.

«Wenceslas», hissed Barbara, in such a peculiar voice that everyone jumped.

«Wenceslas», whispered Pam. The door opened, and in they went.

«Good – you're both wearing your badges», said Peter, pleased. «Now where are Colin and Jack? They're late.»

Jack was waiting for Colin at the gate. He had forgotten the password! Oh dear, whatever could it be? He thought of all sorts of things – Nowell – Wise Men – what could it be? He felt sure it was something to do with Christmas carols.

He didn't like to go to the meeting-place without knowing the password. Peter could be very strict. Jack didn't like being ticked off in front of people, and he racked his brains to try to think of the word. He saw Colin away in the distance and decided to wait for him. Colin would be sure to know the word!

«I saw Pam and Barbara going in», said Jack. «Do you know the password, Colin?»

«Thanks for telling me», grinned Jack. «I'd forgotten it. Don't tell Peter. Come on down the path. I say – look at the S.S. for Secret Seven on the door.»

They knocked. «WENCESLAS», said Colin in a very loud voice.

The door opened quickly and Peter's indignant face looked out. «Whatever are you shouting for? Do you want everyone in the village to know our password, you donkey?»

«Sorry», said Colin, going in. «Anyway, there's nobody but us to hear.»

«Wenceslas», said Jack, seeing that Peter was not going to let him in without the password. The door shut and the seven settled down. Peter and Janet took the flowerpots for themselves. Everyone else sat on the boxes.

«This is a jolly nice meeting-place», said George. «Warm and cosy, and right away from the house.»

«Yes. I must say you and Janet have got it very comfortable», said Barbara. «Even a little curtain at the window.»

Peter looked round at the little company. «We'll have our meeting first, and then we'll have the eats and drinks», he said.

Everyone's eyes went to the neat little shelf behind Colin. On it were arranged seven mugs, a plate of oatmeal biscuits, and a bottle of some dark-looking liquid. Whatever could it be?

«First of all», went on Peter, «we must arrange a new password, because Wenceslas doesn't seem right for after Christmas – besides, Colin yelled it out at the top of his voice, so everyone probably knows it now.»

«Don't be so – » began Colin, but Peter frowned at him sternly.

«Don't interrupt. I'm the head of this society, and I say we will choose a new password. Also I see that two of you are not wearing your badges. George and Colin.»

«I told you I forgot about mine», said George. «I'll find it when I get home.»

«And I think I must have lost mine», said Colin. «I didn't forget it. I hunted all over the place. My mother says she'll make me another tonight.»

«Right», said Peter. «Now what about a new password?»

«Be sensible», said Peter. «This society is a serious one, not a silly one.»

«I thought of one last night», said Jack. «Would “Weekdays” do?»

«What's the sense of that?» asked Peter.

«Well – there are seven days in a week, aren't there – and we're the Seven Society», said Jack. «I thought it was rather good.»

«Oh, I see. Yes – it is rather good», said Peter. «Though actually, there are only six weekdays! Hands up those who think it's good.»

Everybody's hand went up. Yes, “Weekdays” was a good idea for a password for the Seven! Jack looked pleased.