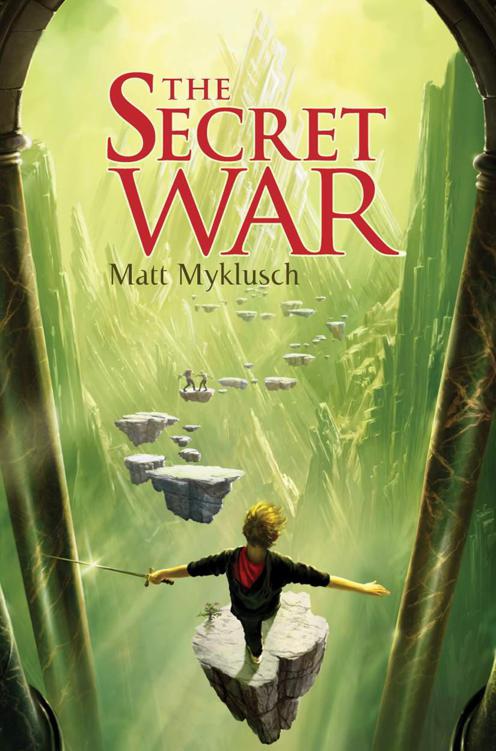 Designed by Karin Paprocki and Karina Granda
The text of this book was set in Goudy Old Style Regular.
Manufactured in the United States of America 0711 FFG
2 4 6 8 10 9 7 5 3 1
Library of Congress Cataloging-in-Publication Data
Myklusch, Matt.

FOR JACK,
WHO MAKES EVERY DAY AN ADVENTURE

Chapter 3:
THE CLANDESTINE ORDER OF SECRETEERS

Chapter 7:
THE CIRCLE OF TRUST

Chapter 11:
THE BATTLE OF GRAVENMURK GLEN

Chapter 12:
THE DAYS OF NO TOMORROW

The sun went down on Empire City and Jack locked all the doors to his apartment, then checked and rechecked the locks. He had work to do—
important work
—and he didn’t want any interruptions. Not now. Not when he was so close.

Jack entered his lab and cut the lights to half power. He took a deep breath and looked around. Was he really going to do this? Part of him still couldn’t believe he was going through with it, but he was short on options and out of ideas. There simply wasn’t any other way for him to find out what he needed to know. Jack had learned a great many things since coming to the Imagine Nation, some of which he’d been happy to discover, and some of
which he had not. Some things eluded him still, like the key to the secret Rüstov computer virus he’d been working all year to cure.

Jack’s powers allowed him to talk to machines, and to control any machine once he understood its inner workings. The more he learned, the more powerful he became. Soon he would be strong enough to stop the Rüstov and their spyware virus once and for all. He was almost there.

Jack was taking on a special research project he’d put off for way too long. Basic engineering and computer-programming studies could take him only so far. Jack needed to study a Rüstov system to figure out the final piece of the virus’s puzzle, and he knew exactly where to find one. It just so happened that it was located in the absolute last place he wanted to look. The answers Jack needed were right inside him.

Jack lay down on an operating table and asked all the machines in his lab to please be quiet. At the moment he was interested in one machine and one machine only. Jack closed his eyes, took another deep breath, and let it out slowly. The time to act was now, before he lost his nerve. For the first time ever, Jack used his powers to
reach out to his Rüstov parasite. A simple thought was all it took, but the result was rather complex.

Talking to the Rüstov inside him wasn’t like talking to other machines, something Jack did every day. With the parasite something felt different. Jack’s mind and the Rüstov’s mind were connecting on a deeper level than he was used to. He could feel his own heart beat faster as he probed the connection, an eerie reminder that this wasn’t some machine separate from his body—it was a part of him. His skin crawled, but he pressed on. The information Jack needed was all there. He could see the parasite’s inner workings clearly, everything from the microscopic nanobots swimming through his bloodstream to the root of the infection, buried deep inside his heart. The Rüstov circuit architecture was disorganized, its code language haphazard and chaotic. It made Jack feel dizzy and nauseous, but he kept going, studying the alien system intently, until something broke his concentration.

Jack stopped cold. He didn’t recognize the voice. None of the machines in his lab were talking. They were all being quiet, just as he’d asked.

At first the only answer was silence. Then the voice returned behind a chilling snicker.
“You know who this is. It’s about time you and I got a chance to speak. We meet at last, eh, Jack?”