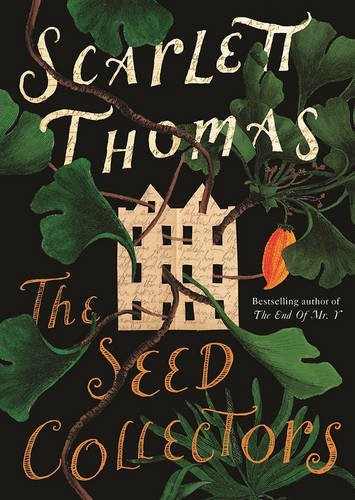 The End of Mr Y

Published in Great Britain in 2015 by Canongate Books Ltd,

This digital edition first published in 2015 by Canongate Books

For Sam and Hari

‘Crown yourselves with ivy, grasp the thyrsus and do not be amazed if tigers and panthers lie down fawning at your feet. Now dare to be tragic, for you will be redeemed.’

Who countest the steps of the sun,

Seeking after that sweet golden clime

Where the traveller’s journey is done;

Where the youth pined away with desire,

And the pale virgin shrouded in snow,

Arise from their graves and aspire;

Where my sunflower wishes to go.

I
magine a tree that can walk. Yes, actually walk. Think it’s impossible? You’re wrong. It’s called the walking palm. Its thick dreadlocky roots rest on the ground rather than inside it, and when it has had enough of being where it is, it quietly uproots itself, like a long-wronged wife, and walks away, at a speed of just over one metre per year. In the time it takes the walking palm to flounce out, nations will fall, people will die of old age, ancient secrets will be told, and new-born babies will grow into actual people who . . .

Bryony and the children have gone, and Fleur is now listening to her friend Clem Gardener on the radio talking about the walking palm,
Socratea exorrhiza
, and the challenges of filming its journey. It took over ten years to film it walking just fifteen metres, out of the shadow of a recently erected logging station. On the time-lapse film it staggered along desperately like something that had just been born or was just about to die. But the walking palm certainly knows how to travel. It does not need tickets, or require transfers, or have to fill in visa forms. It does not put so much hand luggage in the overhead compartment that it falls on people. It just goes. Most species in Clem’s Academy Award-nominated documentary
Palm
find some way of travelling, of course. If they can’t move themselves around, then they produce seeds and get birds to move them, or animals, or us. And some plants have amazing ways of producing seed. The talipot palm,
Corypha umbraculifera
, which can live to over 100 years old and
only flowers once in its life, produces the biggest inflorescence in the world, made of millions of flowers. Now there’s a real commitment to the next generation. Some of the 2,400 species of palms around the world are known to actually flower themselves to death. It’s called hapaxanthy . . .

‘You mean they
commit suicide
by flowering too much?’ says the presenter.

‘It’s quite common,’ says Clem, in her low, underwatery voice. ‘They put all their energy into flowering – or, in other words, attempting to reproduce – and there’s nothing left for anything else. Their roots wither and die.’

‘So it’s not just because it’s beautiful?’

‘Nothing in nature is “because it’s beautiful”, not really,’ says Clem.

Fleur is finishing her tea. It’s a homemade blend of dried pink rosebuds, passion flower, cinnamon and honey. It’s very soothing. Since Bryony and the children have gone, she has also added some of the opium she grows in the garden. She looks out of the window of the old dowager’s cottage that Oleander gave her on her twenty-first birthday and raises the antique teacup to the robin she has kept alive for the last seven winters. He cocks his head. Fleur is still in the cottage. If she goes out to do some gardening, there might be live worms, or the slugs that she sometimes puts in a saucer for him. But Fleur won’t garden today. He’ll have to make do with the dried fruit she put on his table yesterday.

‘Oleander is dead,’ she tells him through the window. ‘Long live Oleander.’

She drinks deeply from the cup.

The robin understands, and begins to sing his oldest and most sorrowful song.

‘I’m trying to listen to Clem, Holly. You should listen too. She’s your godmother.’

‘Yeah, I know, and she’s also like my millionth cousin, a thousand times removed.’

‘She’s your second cousin, once removed. My cousin.’

‘We could have stayed at Fleur’s to hear her.’

‘Yes, but I think Fleur wanted to be on her own for a bit. And anyway, we’ve got to get home. Daddy’ll be making dinner. And you’ve got homework to do.’

Bryony turns up the car radio, but Clem has stopped talking. Now there’s a guy who had to be rescued from somewhere, possibly Antarctic Chile, although Holly was
Mummy
ing over that bit. The format of this programme is supposed to be a group discussion, but Bryony knows that Clem probably won’t speak again. At school she had a habit of saying one clever thing in every class, and then drifting off to God knows where while Bryony highlighted all her notes in one of three fluorescent colours and Fleur learned mindfulness by stabbing herself with a protractor. Every so often the biology teacher said something about how sad it was that these three weren’t at all like their mothers. In fact, at fourteen, their mothers – frail, beautiful Grace, bold Plum and the legendary Briar Rose – had also been terrible students, interested only in the Rolling Stones, but no one remembers that, because it doesn’t fit the story of how they become famous botanists. Or famous-ish. Or famous-ish mainly for disappearing while on the trail of a miracle plant that probably never existed, or possibly killed them all.

‘More than I’m a
village
anyway.’

Having a son called Ash, while living in a village called Ash, hadn’t seemed anything worse than a bit cute when they named him. There aren’t that many botanical names for boys, after all, and at least Ash could be short for Ashley if he ever wanted to get away from the plant thing. Bryony’s husband James was very keen on the old Gardener family tradition, though, and in the end it came to a toss-up between Ash and Rowan. Ash himself has since pointed out that they could have chosen Alexander, William or Jack (in-the-hedge). On that occasion – Ash’s eighth birthday, or perhaps it was his seventh – James told Ash he was lucky not to be called Hairy Staggerbush, Fried Egg Tree, Thickhead or Erect Lobster Claw, all of which are apparently real plants.

Bryony and James have no idea of the stupid conversations Ash has pretty much every day at school when someone asks him, yet again, why he’s called Ash when he lives in Ash, as if he named himself. Being named after a grandfather or a footballer or a TV character is fine. But a whole village? All kids know that no one should be named after the place they live, unless they are Saint Augustine or something, or Saint Stephen or Saint George – but in those cases you become famous first and
then
someone names a place after you. On his own, Ash likes being named after a tree that has magical powers. But he’s hardly ever on his own. He is dreading going to secondary school in Sandwich or Canterbury, where people will ask his name and where he comes from and both answers will be the same, which will make him sound retarded. He is already practising shrugging and saying ‘Oh, just some boring village’, but it’s not that convincing. Maybe the house will burn down, on some lucky day when there are no people or cats inside it (which is virtually impossible: there’s always life in Ash’s house), and they’ll have to move.

‘Clem doesn’t make cakes like Fleur,’ says Holly. ‘And she wears really weird clothes. But then I suppose that’s because she makes documentaries, and . . .’

‘No. Fleur’s pretty. She wears dresses. And
interesting
combinations of things.’

Bryony sighs. ‘Well, yes, I suppose everyone knows that dresses make you pretty.’

‘What does that mean, when you say it like that?’

‘How do you know about irony?’

It’s true. But while Fleur wears things you’d see in the thicker magazines, or on the size-zero celebrities she works for, Bryony usually wears a version of the clothes Holly wears but better cut and in darker colours: jersey dresses or big jumpers over leggings, all made by Backstage, Masai or Oska. What Bryony used to think of as fat people’s clothes. Yes, yes, of course all the styles come in S and even XS, but it remains unclear why thin people would need clothes with elasticated waists and asymmetric folds around the middle. Almost everything Bryony now wears goes in the washing machine at forty degrees and doesn’t need ironing. Bryony loves fashion, but it doesn’t love her. She’d like to be a Jane Austen heroine – or actually even one of the heroine’s shallow friends who only cares about fashion and won’t go out in the rain – but she’s way too fat for that. This season it’s all about clashing florals and colour blocking. You can clash florals if you’re a thin seventeen-year-old. If you do it at Bryony’s age you look as if you don’t own a mirror. If you colour block at Bryony’s size you look like a publicly commissioned artwork.