Read The Seeds of Time Online

The Seeds of Time 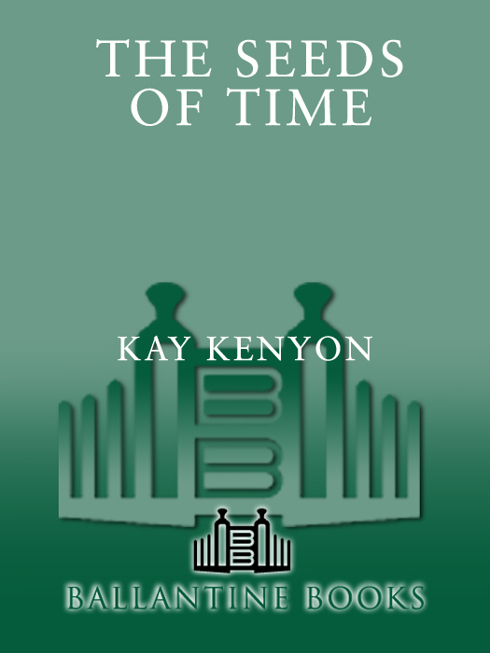 Clio’s eyes snapped up to look at Teeg, standing in the tent door, the perimeter lights glaring behind him.

“Maybe we’re gonna make our own rules from now on,” Teeg said. “We’re a long way from Vanda, Clio. Maybe I like it here. I was hoping you liked it too.”

“What are you talking about, Teeg?”

“You ever think about staying?”

“On Niang?” Clio’s heart was sinking like an elevator with the cables cut. “No, I never did.”

“Maybe you should start.”

“Jesus, Teeg. You gotta be kidding. Get a grip. Nobody wants to give up Earth, give up home.”

“Posie does. Liu and Meng too. We’ve talked.”

Clio looked at him, scared for the first time. “You’re crazy. Think they wouldn’t come after us?”

Then, from a distance, shouts and then gunfire. Teeg bolted through the tent flap, Clio behind him. She ran for her gun in the crew tent.

THE SEEDS OF TIME
A Bantam Spectra Book / June 1997

SPECTRA and the portrayal of a boxed “S” are trademarks of Bantam Books, a division of Random House, Inc.

All rights reserved.
Copyright © 1997 by Kay Kenyon.
No part of this book may be reproduced or transmitted in any form or by any means, electronic or mechanical, including photocopying, recording, or by any information storage and retrieval system, without permission m writing from the publisher. For information address: Bantam Books.

Dive to the Stars
Time Management
Beyond Eden
Metal Futures

BOOK II—THE TELLING OF THE TREES

Epilogue: And Time Will Bloom

The telling of this story is dedicated to my husband, Thomas D. Overcast, with love and gratitude. I am especially indebted to my agent, Donald Maass, for his inspired ideas and confidence in me. My special thanks to my editor, Anne Lesley Groell, for her sure footing in literary matters large and small, and to Donald McQuinn and the Pacific Northwest Writers Conference for mentoring and belly laughs … and again, to Thomas, for all the long discussions of time travel: maddening, elusive, and exhilarating.

If you can look into the seeds of time,
And say which grain will grow and which will not,
Speak then to me.

BOOK I
GREEN
SHIFTING
DIVE
TO
THE
STARS

Clio Finn rested her face against the bulkhead of her cabin, listening to countdown over the intercom, trying not to pass out. She felt a vein in her forehead throbbing against the cool metal of the ship. Minus twelve minutes and counting, ship’s voice said. Eleven. She had just popped the last of the pills, and already she was shaking bad, but the ship was primed to go, her metal skin humming, deck throbbing, air charged with static and the hot, sharp smell of engines stoked to burn.

Then the captain was calling her to the bridge, in tones that said,
Now
, Finn.

Clio yanked open the cabin door, jammed down the corridor, nearly colliding with Hillis, chief botanist. He grabbed her arm, stopping her a moment.

“Sure.” She flashed him a wide smile, then dropped it. “Maybe this Dive’s got me spooked,” she said. “Maybe I got a bad feeling about this one.”

He pulled her in close to him, looking into her eyes, and whispered, “Jesus, Clio, how many of those things did you take?”

“Just two,” she lied, searching his face for some comfort.

He shook his head, released her.

Clio raced for the bridge, taking the ladder to the flight deck two rungs at a time. She emerged onto
Starhawk
’s bridge, now dim for pre-Dive countdown, readouts pulsing on every side. Captain Russo was busy with command central on visual. She nodded at Clio. Clio nodded back,
slipped into her chair. Her copilot, Harper Teeg, seated next to her, raised an eyebrow at her.

“I thought you girls had iron bladders.”

“You haven’t learned anything new about girls since seventh grade, Teeg.”

“Just waiting for the right teacher, Miss Finn.” His eyes lapped her up in the usual way. Didn’t matter they were about to Dive back four hundred thousand years, didn’t matter she was sick as hell and the only one on board that could steer this crate. Things like that didn’t faze Harper Teeg.

Clio strapped herself in, clipped her headphones on, pushing them into her short, thick auburn hair. She scanned the instrumentation, everything looking good, panels surging to go. Listened to the countdown droning of command central, still coming in clear from Earth’s largest space station, Vanda, though eleven thousand kilometers distant from the ship.

On another channel, Captain Russo found time to say, “Lieutenant Finn, you don’t leave the bridge during countdown again, you copy?”

Clio turned her head around to her, acknowledging. “Yessir. Sorry, sir.” Russo wasn’t half bad, Clio thought. Just stiff as hell, a lifer with Biotime. No grey in that short black hair, though. If Russo felt the pressures of command, she buried it deep in her stocky body.

“You got a problem, Ellison?” Russo asked, her voice even, her face scowling at this last-second interference from the company.

“Not at all. You are on track, Captain. Little jumpy aren’t we?” He popped a small candy in his mouth, moving his jaw sideways, as though chewing cud.

“Yeah, I’m always jumpy when I take a little trip like this.”

Russo shook her head. “She’s on task, Ellison. You want to talk to her?”

Brisher looked surprised. “No. Not necessary, just backing you up, Captain. Anything you need, just ask.”

“Thanks, Biotime, we are ready to fly. No problems.” In a tone that said, And keep your goddamn nose off the bridge.

Clio listened to this exchange, her stomach clenching up, a trickle of sweat starting to cut a path down her hairline. Ellison Brisher was out to get her, she figured; whether he had anything on her or not was a question. Didn’t want to think about what Biotime’s chief operations officer could do to her if he chose.

Screen two blanked out as station systems separated from the ship, leaving them in communications blackout as
Starhawk
gathered speed, reaching for Dive velocity, reaching for their destination, Crippen’s Planet.

Clio gripped the chair arms, preparing for Dive. Except there wasn’t any way to prepare for Dive. Other Dive pilots had their rituals, customs, superstitions. Clio just dove, letting the time stream take her, fighting the fear, the hallucinations, riding the sheer joy of it. Every other poor bastard on the ship in dreamland, unconscious, depending on her, a Dive pilot with a dozen too many missions, and now with the shakes to prove it.

Teeg flashed a grin at her. “Night all. Wake me with a kiss, this once, Finn.”

“Baby, I been dreaming on it.”

Russo again: “Cut the chatter, we’re heading into Dive. Helm to you, Finn.”

“Yessir.” Clio throttled the main engines up to 100 percent, felt the ship lurch and reach for transition speed, threw the pair of switches controlling the time coils. Sensed, then felt, the field envelope the ship, hit the flight deck, take her
reeling into the hidden underbelly of the space-time continuum.

And she was Diving. Was Diving down, leaving the common universe, felt her consciousness floating just in front of her forehead, but her thought process, her coordination, they remained normal if she remembered to engage them. The ship lights pulsed way down, cranking up the stars to laser intensity as Clio watched through the viewport. Teeg’s head slumped to the side, he was out, they were all out.
Starhawk
was changing dimensions, from space to time, sweeping her up in a slow, rolling wave that for some obscure reason left only a select few conscious and able to fly. And Clio Finn was one.
Used to be
, she thought.
Now I gotta have a little help
.