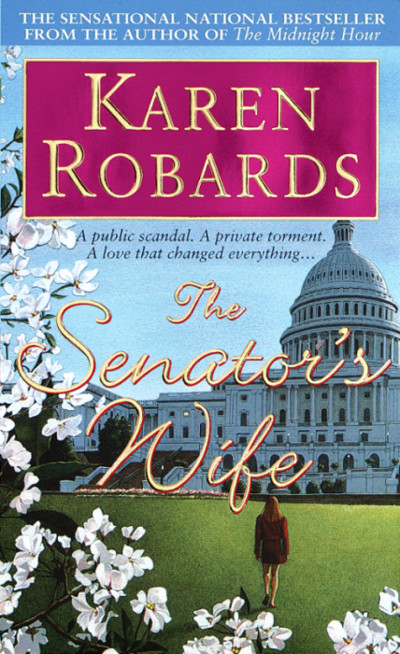 A public scandal. A private torment. A love that changed everything--
Ronnie Honneker is the senator's wife. When she fell for the dashing politician, the stars in her eyes kept her from seeing his flaws. And when she discovered his constant need for other women, it was already too late. Now all the glamour of politics can't make up for Ronnie's loneliness--or her husband's affairs. Especially the one that explodes into a media sex scandal.
Pursued by reporters, Ronnie reluctantly lets handsome political strategist Tom Quinlan clean up the mess. She agrees to publicly stand by her man until after the next election. Privately, she is in turmoil, and falling passionately in love--with Tom. As Ronnie and Tom seek shelter in each other, suddenly the unexpected happens. The senator's violent death thrusts Ronnie into the spotlight--as the leading suspect in his murder. Now only one thing can prove Ronnie's innocence: the whole shocking...

HIGH PRAISE FOR KAREN ROBARDS
AND
THE SENATOR’S WIFE

“AN EXCITING AND SOMETIMES
HUMOROUS PLOT, interesting characters,
and a hot romance combine to make this a
delightful story.”

“Ms. Robards continues to cement her
position as one of the genre’s premier
authors.
The Senator’s Wife
is filled with
juicy scandals, passionate affairs and
deadly motives.”

“It is Robards’s singular skill of combining
intrigue with ecstasy that gives [her novels]
their edge.”

“Karen Robards’ characters catch you from
the start and hold you until the end … you
will hate to say good-bye to them.”

Published by
Dell Publishing
a division of
Random House, Inc.

This novel is a work of fiction. Names, characters, places, and incidents either are the product of the author’s imagination or are used fictitiously. Any resemblance to actual persons, living or dead, events, or locales is entirely coincidental.

“You Take My Breath Away” Music by Stephen
Lawrence, lyrics by Bruce Hart. Copyright © 1978
The Laughing Willow Company, Inc. Used by
permission. All rights reserved.

Excerpt from The Last Victim © 2012 by Karen Robards

The trademark Dell
®
is registered in the U.S. Patent
and Trademark Office.

This book contains an excerpt from The Last Victim by Karen Robards. This excerpt has been set for this edition only, and may not reflect the final content of the forthcoming edition.

Reprinted by arrangement with Delacorte Press

In this book, the date of the Neshoba County Fair has been moved up, simply because I attended the fair, loved it, and wanted to include it.

Excerpt from The Last Victim

“H
ONEY, THAT SURE AIN’T NO HOT DOG.
Looks more like one of them Vienna-sausage things to me.”

The girl was drunk. Crazy drunk. And high as a kite on coke and God knew what else. She was so far out in la-la land she didn’t know what she was saying. He reminded himself of that even as he unwillingly followed her gaze to the object of her amusement. He’d just told her that he was going to stick his hot dog between her buns.

What they were both looking at was small and shriveled. Vienna sausage. Not hot dog.

“Pee-wee, pee-wee.” She giggled, peering over her shoulder at him as he stood at the foot of the bed. “If that’s not your nickname, it oughta be. Pee-wee.”

It was a party, and this was a gang-bang for pay. The girl tied to the bed had been worked over twice already and seemed to be loving it. The faint light from the Biloxi casinos on the not-so-distant shore drifted through the porthole to gild her body from the base of her spine to her feet. Her eyes gleamed at him through
the curtain of her black hair. Her teeth were very white. Like him, she was buck naked. She was lying on her stomach, spread out in an X shape, her hands and feet secured to the bed frame with the silk scarves she had brought with her. Her round white buttocks, marked with the love-bites one of the others had given her, wiggled at him encouragingly. From all indications, she was one of those rare whores who really liked sex. Strangely enough, the idea that she was eager for what he was about to do to her was unappealing. It seemed to shift the balance of power from him to her. How she had squealed when Clay had put it to her! He’d heard her through the closed door of the cabin as he’d impatiently waited his turn. Her shrill cries of seemingly authentic pleasure as flesh smacked against flesh had made him hard as a rock.

“You just plannin’ on lookin’, lover?” she asked. “Or are you gonna do somethin’ about it?”

“Shut up.” Leaning over, he slapped her ass with his hand, hard.

She writhed, acting like the slap hurt a lot more than it did. He slapped her ass again, watched her wriggle, and felt himself start to get hard.

Then she spoiled it all by giggling.

“Shut up,” he said again, climbing onto the bed between her spread legs and trying to mount her.

“Honey, I sure hope you
can
get your jollies by just lookin’, because that thing ain’t gonna work tonight. It ain’t no harder than a marshmallow.”

She was giggling like a lunatic. He found himself suddenly conscious of who might be listening on the
other side of the door, just as he had listened with lascivious attention to the two who had gone before him.
Anybody out there in the hallway who wanted to could hear
.

One thing he hadn’t heard was giggles.

“Quit laughing,” he growled, pushing her face down into the pillows and pulling another pillow over her head to muffle the sound. It helped, a little, though he could still hear her faint gurgles. But at least now the sounds she made should not be audible beyond the cabin.

Ignore it, he told himself. Concentrate.

Taking himself tenderly in hand, he worked at it. Nothing.

“I said quit laughing!” He laid on top of her, his big body covering her much smaller one, pressing down hard on the pillow covering her head. It worked. She wasn’t giggling anymore, or if she was, he couldn’t hear it, which amounted to the same thing.

Good. He maneuvered around until he found a position in which he could both keep her quiet and get his business done. It took some effort with her squirming as she was, but at last he managed.

He liked going in the back door.

As he did it to her, she bucked beneath him as if he was giving her the ride of her life.

“Stupid broad,” he muttered, but her frantic squirming did the trick. Praying a stray giggle wouldn’t erupt from beneath the pillow to destroy his concentration, he pumped. A couple of minutes, and his business
was done. He collapsed, lying on top of her while he regained his breath and his dignity.

It was over, and he’d managed to acquit himself respectably one more time.

Maybe, he thought, in the interests of getting it up more easily, he ought to quit the booze. Or the coke. Or both. Or neither. Hell, they were more fun than riding a woman anyway.

If he took away the pillow, would she start giggling again? He would kill her if she did. Out in the hallway they could hear.

Finally he got to his feet. She didn’t move. He put his clothes on, his movements unsteady from some combination of the substances he had consumed and the sex he’d just had and the pitching of the boat.

Someone banged on the door. “Hey, stud-muffin, you ’bout done in there?”

“Keep your pants on,” he called back with restored good humor. He had done the thing, done it right, she was still lying there limp as a spaghetti noodle, he had worn her out.

He could go back out there with his head held high, a man among men. Thrusting bare feet into deck shoes, he flicked the pillow away from the girl’s head, pinched her ass, and turned away to open the door.

“Next,” he said with a grin, exiting into the narrow passage that was darker than the cabin. Ralph staggered past, so zonked out he could hardly stand up.

“She any good?” Ralph asked over his shoulder from the cabin doorway. He was already unzipping his pants, a frat-boy’s leer on his face.

He shrugged, feeling on top of the world again. The rest of them were partying up on deck, and that’s
where he was headed. The music was festive, the girls naked, the booze chilled, the drugs free.

Who could ask for anything more?

Behind him, muffled by the now-closed door but still audible in the close confines of the interior of the boat, he heard Ralph say, “
Sweet Jesus.
”

Leaning back in his chair, Tom Quinlan didn’t immediately reply to his partner’s semiserious suggestion. Instead he watched the slender red-haired woman on the TV screen in front of him with frowning concentration. It was a scouting tape, of the sort sports coaches used to prepare for a contest, of a speech she had given the previous week to a dinner audience of car dealers and their wives.

When it was possible, Tom always liked to assess his clients in action prior to actually meeting them. He felt it helped keep his judgments impartial.

The woman was not what he had expected. The Senator’s choice of a second wife had clearly been influenced by parts of his anatomy far removed from his brain. She was a little taller than medium height, slim, young, beautiful. Which should have been an asset in the age of television, but in this case almost certainly was not. There would be the jealousy factor from the female constituents to contend with, for one thing.

Insecure by Ainslie Paton
Trustee From the Toolroom by Nevil Shute
Ghost Town at Sundown by Mary Pope Osborne
What She Saw by Roberts, Mark
Loving a Lawman by Amy Lillard
Lou Mason Mystery - 01 - Motion to Kill by Joel Goldman
Infected Series (Book 1): Mission: New York by Walker, Jack
Sinful Confessions by Samantha Holt
The Cowboy and his Elephant by Malcolm MacPherson
Limelight by Jet, M