Read The Shield of Darius Online

The Shield of Darius 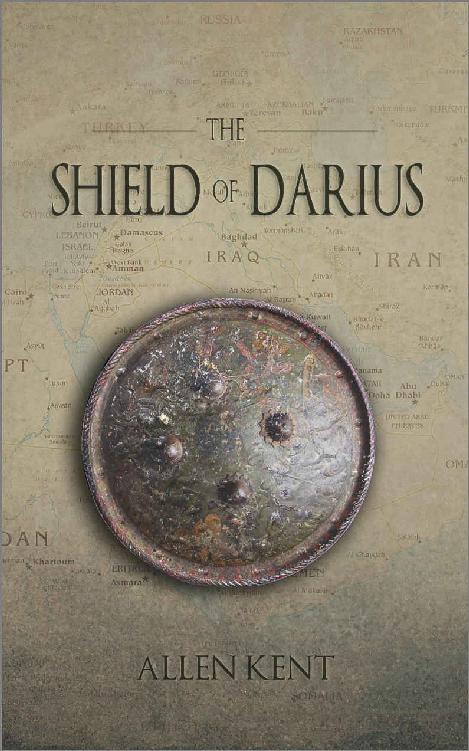 by Allen Kent. All rights reserved.

Printed in the United States of America. No part of this book may be used or reproduced in any manner whatsoever without written permission except in the cases of brief quotations imbedded in articles or reviews, with attribution shown. For information address AllenPearce Publishers, 16635 Hickory Drive, Neosho, MO 64850

who opened my life to the world

I am most grateful to my team of readers, my wife Holly, Anne and Richard Clement, Diane Andris,  and Jim and Erica Farnsworth, whose invaluable editorial assistance improved this book immeasurably.  Special thanks to Richard for his assistance with Farsi transliteration, and to David Farnsworth who provided me with a map of  1970s Tehran to refresh my memory.  Bill Center regaled me with stories of flying 0-2s over Laos during the Vietnam Conflict when we flew together in the Air Force, and helped shape the character and background of Eddie Warren.  And special thanks to the people of Iran who I learned to love during my years living there, and to a fascinating country I promised to return to, at least in my imagination.

The Shield of Darius

Reports that say that something hasn't happened are always interesting to me, because as we know, there are known knowns; there are things we know we know. We also know there are known unknowns; that is to say we know there are some things we do not know. But there are also unknown unknowns - - the ones we don't know we don't know. And if one looks throughout the history of our country and other free countries, it is the latter category that tend to be the difficult ones.

This is the story of one of the unknown unknowns.

Nothing in the lush green countryside surrounding Ben Sager suggested his day would end so badly. It was unusually warm in England’s County Dorset, with only a wisp of horse-tail clouds brushing the top of the gray stone tower that rose above him on the low, grassy hill.

Ben turned the brochure in his hand to orient the diagram to match the castle ruin, glanced from the page to the crumbling structure, then back to the drawing. The gate and keep were to his left, with a long section of toppled stone wall stretching across in front of him into an overgrown mound at his far right. The river was behind him and the small wood of thick pines to his left. He nodded with absent satisfaction, comfortable that he was properly oriented. Flipping the pamphlet to its back, Ben read the brief narrative, learning that Roger de Caen, Bishop of Sarum and Abbot of Sherborne, had built this hilltop fortress overlooking the River Yoe in the early twelfth century. The paragraph claimed that a succession of proud English noblemen had inhabited Sherborne Castle since but as Ben scanned the ruin with sad amusement, he saw little to suggest its early grandeur.

Whew, he thought. These places must have been cold in the winter.

A small dark figure appeared atop one of the crumpled battlements and swung an arm in long, exaggerated sweeps, then darted down the far side without waiting for a response. Though too distant to be seen clearly, the figure had been PJ. At ten, he was a carbon copy of his father – short and wiry with a shock of black hair that waved naturally over his forehead. Ben waved back at the empty wall and smiled at how much the boy reminded him of himself at that age.

Genetically, PJ seemed to have ignored the fact that he had a mother. He drew gene for gene from Ben’s store of Roma ancestry, a line that after immigrating to American from the old Yugoslav Republic, had bred without compromise until Ben broke the chain, captured by the allure of an Irish beauty while a graduate student at the University of Virginia. Kate’s hair was as black as his own, but she had the creamy, flawless skin and deep green eyes of County Cork. And each time Ben shot baskets with PJ, he wished his son had picked up an inch or two of his mother’s height. At 5’9” Kate was two inches taller than Ben, but none of it had gone to their son.

Ben turned and flopped onto the grassy slope beside the river, gazing across its mirrored surface at a manor house that stood surrounded by live oaks on a hill opposite the castle. He never ceased to marvel at how much England looked like it should. With the expansion of Sager Technologies into Leeds, he now visited the British Isles three or four times a year, always finding the countryside and villages to be calendar perfect. When he mentioned the observation to Kate, she laughed.

“You’re just too used to big dirty cities,” she said. “No place is that unspoiled anymore.” But now that she was coming with him and they were taking an extra few weeks to get into the countryside, she admitted he was right.

On this outing they had rented a camper – what the British call a caravan – and driven north from London to Stratford and Coventry. Then southwest through the quaint stone villages of the Cotswolds: Chipping Campden, Stow-on-the-Wold, and Bourton-on-the-Waters. Constable landscapes with storybook names. Tidy thatched cottages surrounded by manicured gardens, nestled along narrow cobbled lanes that left the villages to wind into the countryside between neatly trimmed hedges and gray stone walls.

At Trowbridge the evening before, PJ and his sister Jennifer had walked unattended through the campground, listening to soft English accents and feasting on McVitty’s Jaffa Cakes and Cadbury’s chocolate. Ben could very comfortably live here. If he could get the company through another ten profitable years, the kids would be in college and he just might be able to buy a place like the one across the river. Not quite that imposing, but one where he could settle down with Kate in peaceful country style and fish for trout in a stream like the River Yoe.

The warm softness of the grass and quiet ripple of the river soothed his travel-weary back and legs and tugged heavily at his eyelids. He dozed for a moment, then forced his lids open and glanced at his watch, jumping quickly to his feet. Four-fifteen! They wanted to make Seaton on the coast by dark and needed to move. He turned down the bank and started toward the stand of young pine and oak that stretched across the bottom of the hill to the small lot where he had parked the camper. Kate and Jenn might already be in the van, but PJ? Finding PJ could take some time.

Ben turned along a path that skirted the wood leading toward the front entrance to the fortress. At the edge of the trees in front of him, a man in khaki slacks and jacket with a bright yellow scarf tied about his neck stepped into view, then retreated back into the shelter of the trees. Ben stopped and peered into the shadows, straining to follow the man. His movements had been too quick. Too conscious – as if he had been startled to see Ben and was dodging away. For a long moment Ben watched the spot where he had disappeared, then chuckled and shook his head. The poor guy probably had a son like PJ and was in the middle of some medieval war game, assigned by his son to storm the castle without being seen. Given the slow tourist day at Sherborne, it was a good time for hiding games. When the Sagers pulled into the parking area an hour earlier, their caravan had been the only vehicle in the lot.

As he entered the trees along a path that led toward the parking area, Ben ducked low and peered between the thatched branches of the pines for the other tourist. The first glance had been fleeting, but the man looked Middle Eastern. Not swarthy enough to be East Indian, but darker than north Mediterranean. Arab or Persian, which added to Ben’s curiosity. He did not share the aversion for that part of the world that had been conditioned into most Americans by a decade of Iraqi and Afghan conflicts and the on-going Palestinian debacle. Ben had spent all but one of his high school years in the Middle East where his father had been on a three year assignment with the U.S. Information Agency in the Iranian capital of Tehran. The years in Iran just before the Shah was deposed had affected him more profoundly than any other period in his life. He didn’t admit it much. It wasn’t always smart in today’s America to speak kindly of Iran. But he loved the rugged country and its exuberant, passionate people, an affection he sustained by continuing to study the country and its language as something of a hobby. Someday he was going to get back, taking Kate and the kids with him.

He did not find the man in the castle wood. Instead, a young woman appeared suddenly among the trees to his right, dressed in blue jeans and a bulky sweatshirt, pushing toward him through the branches with an anxious face. She saw him and beckoned frantically for him to come. Ben jumped forward, feeling the blood course to his temples as he sensed her alarm.

“Please come.
You must hurry!”
Her voice carried the thick inflection that matched her black hair and olive skin and confirmed Ben’s assessment of the origin of the man in the trees.

“What is it? What’s happened?”

“Your son, sir. He has fallen from one of the towers and is hurt very badly. We must hurry!”

“Where is he? You haven’t moved him....” Ben scrambled after her, thrashing through the pine boughs toward the parking lot, the pressure that had seized his chest at the sight of the woman growing to a frantic pounding.

“We have him in our van…to go to hospital,” she gasped back over her shoulder. “My father and your wife are with him.”

“My God,
you shouldn’t have moved him!”

The woman had reached the edge of the lot and was dashing toward a cream colored van that stood near the entrance to the drive, its sliding panel door half open. Across the lot, the Sager caravan still sat alone beside the ticket booth that faced away from him toward the iron-gated entrance to Sherborne Castle.

“Here!
Hurry please!
” She stopped breathlessly beside the door of the van.

Ben reached her and squinted into the dark interior. A small huddled figure lay motionless on the seat, covered with a faded brown blanket.

“PJ?” He leaned inward and reached for the boy’s shoulder. From the rear of the vehicle to his left he sensed a faint blur of motion and the back of his head exploded in a numbing burst of colored spots – then blackness.