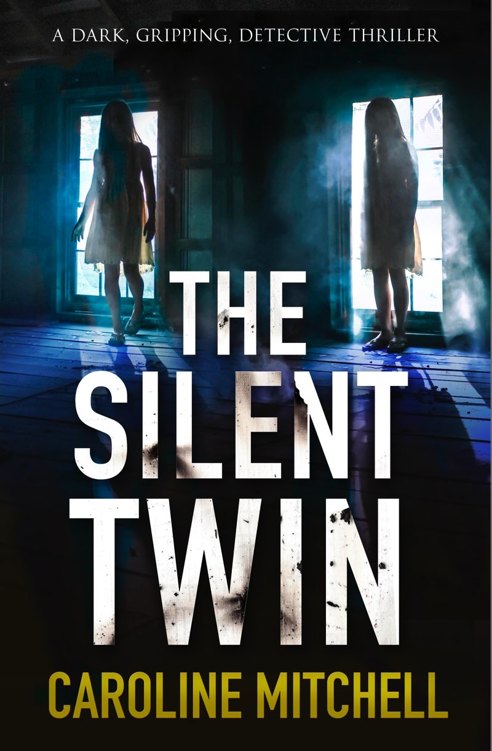 This book is dedicated to the parents and families of missing children in the UK and beyond. I hope that one day you find peace.

A
bigail and Olivia
are dressed differently today. Olivia likes soft colours, but Abigail’s taste suits her personality; vibrant, bright and bold. It makes her easy to find when they play hide and seek on the farmland, but she never tires of the game. Right now, it’s Abigail’s turn to hide.

Abigail’s blonde hair streams behind her as she runs past the hen house, her siren-red wellingtons contrasting with her soil-dusted yellow dungarees. A sliver of an icy breeze whistles through the rain-rotted wood of the empty cattle sheds, which house freshly hatched spiders and field mice within. It creaks and shivers against the growing gale.

Olivia’s voice echoes as the wind whips her words. She is counting through cupped hands, the tips of her fingers lightly touching her forehead as she squeezes her eyes shut . . .
ninety-eight . . . ninety-nine . . . one hundred. Here I come, ready or not
.

Ready or not. The watcher disguises their deceitful expression, but the eyes behind the mask are cold.

Abigail giggles frantically as she searches for a hiding place and runs towards the unused hay barn. There is not a second to spare.

The watcher steps out as Abigail turns the corner, catching her in their shadow, cast by the weakening sun. The outhouse timbers creak, as if to say
we know.

S
ue patted
the chair next to her, keeping her voice low, ‘Jennifer, come take a seat.’

Jennifer discreetly returned a greeting before sitting down beside her old colleague. The briefing room at Haven police station was not the time or place for a reunion. Uniformed officers were still piling in, standing with their backs against the magnolia walls. Top brass was present in the form of Detective Chief Inspector Anderson, whose shadow fell like a slender reed against the projection screen. His short grey hair was cut with exact symmetry, his handkerchief folded in a perfect peak as it peeped from the top pocket of his suit. Known for his efficiency, he was the Senior Investigating Officer in the case of the missing twin, which meant police were taking the child’s disappearance very seriously. DI Ethan Cole sat across from his superior at the front of the room, looking polished and focused in his charcoal suit.

Jennifer flipped open her black leather pocket notebook and clicked the top on her pen. On the top of the page she wrote the time, date, her name, call sign, and location, followed by her role: Family Liaison Officer. It was the first time she would put her training into use, and she hoped her presence would be worthwhile.

She scratched the back of her head with a perfectly manicured nail. Her mahogany hair had been tied into a professional bun while still damp from the shower, but after ten minutes in the airless briefing room, she longed to set it free. Every inch of her felt uptight at the thought of being thrown into such a high-risk case.

Sue leaned into her, the smell of spearmint chewing gum filling the gap between them. ‘How’s Will? Honestly, my heart was in my mouth when he disappeared.’

The subject of DC Will Dunston’s disappearance had been the talk of the station, and it was with much relief that Jennifer delivered a positive update. ‘Much better, thanks,’ Jennifer whispered, as they waited for the briefing to begin. ‘He’ll be back to work soon.’

The door slid shut as the last officer crept in, signalling an end to their conversation. The overhead projector whirred from its mount on the ceiling, and as DCI Anderson pressed the clicker, a series of images came into view. His face was serious, and his eyes held a steely determination Jennifer had seen before – during murder investigations. It was enough to make her sit up and take note, and she worked deftly, scribbling down points of interest in her notebook.

After relaying the background information on the case, DCI Anderson’s stretched hand rested on the interactive whiteboard. A map of Blackwater farm displayed the spot where the nine-year-old child had last been seen at 10 a.m. that morning. A specialist search team had begun searching the house and outbuildings, battling the heavy April showers in their efforts to locate forensic evidence of a potential crime. But there were so many variables. He pointed to the river Blakewater, which ran parallel to the farm, about half a mile down. A request had been put in for the marine unit to attend. His hand swept across the map to Haven woods, thick with forestation and dotted with empty boathouses. Sniffer dogs were being requested, although a local dog handler had already scoped the outskirts of the farm with no luck.

Nobody could criticise the police for a lack of response. DCI Anderson discussed consulting specialist detectives who had worked on high profile cases of missing children in the past. Directions were given with regards to house-to-house enquiries and future press appeals. He pressed the clicker, and an image of an exhibit filled the screen, ceasing the undercurrent of chatter in the room. It was a picture of the little girl’s glasses; Harry Potter style circular frames. A smudge of mud blotted a cracked lens, filling Jennifer with a sense of gloomy foreboding.

DCI Anderson looked grimly at the exhibit. ‘This is why we’re fast tracking enquiries. These were found just outside the farm this afternoon, on a lane leading to the woodlands. Abigail has bad eyesight; she can’t get far without them.’ His voice dropped as he gazed around the room. ‘This information has not yet been released to the press. Given what her parents have told us about their daughter, we do not believe she left the area of her own accord.’

Jennifer glanced at the clock on the wall, painfully aware she had to liaise with the family before evening closed in. She returned her focus to DCI Anderson’s voice, her heart faltering as he pointed in her general direction.

‘Sue, you’ve been with the family today, can you provide us with any further update?’

Sue rose, straightening her posture. ‘Yes, sir. Well, it’s as to be expected, really. Sergeant Duncan, Abigail’s father, is devastated. His wife, Joanna, seems to be taking it in her stride. They’ve only recently moved to the farm, having lived in a townhouse in Haven previously. They don’t have any enemies that we are aware of, but enquiries are being made with regards to friends, family and acquaintances.’ Sue peeked at her notes and continued. ‘Mrs Duncan’s an online parenting guru. She runs a blog with over two hundred thousand subscribers, and has an occasional slot on a local TV channel, which places her firmly in the public eye. She’s very keen to speak to the press, but I’ve strongly advised her against it.’

DCI Anderson peered down his nose. ‘I see from your report that you’ve mentioned some unusual activity in the house. Can you tell us about this?’

‘Yes, boss.’ Sue flushed, the colour rising as her discomfort became apparent. ‘There has been unusual activity in the form of light bulbs blowing, banging on the walls, and . . . um . . .’ She swallowed hard, throwing Jennifer a sideways glance. ‘. . . furniture moving by itself.’ A rumble of murmurs grew in the room. ‘It’s a very old house, in need of renovation,’ she hastily added. ‘DC Jennifer Knight is taking over my role from today, under the remit of Operation Moonlight.’

After a nod from her superior, Sue sat back down.

‘Jennifer, please ensure you sign the paper being passed around the room. I want you to approach this family with the mind of an investigator. You are our eyes and ears on the ground.’

Jennifer located the paper and added her details to the list of hastily scribbled names, ranks, departments and mobile telephone numbers before she left. The list would be disseminated to attendees so they could keep in touch with each other during the course of the investigation. Briefing ended with an image of Abigail, looking happy and relaxed as she played in a field of sunflowers with her identical twin sister, Olivia. But the picture seemed drained, and cast a sombre atmosphere in the room as officers filtered out. Jennifer wondered how many of them would be giving their kids an extra hug that night.

J
ennifer took
the opportunity to question Sue on the strange occurrences at the house, which were part of the reason that she had been allocated to take over as Family Liaison Officer. Operation Moonlight worked in the same way as normal police departments apart from one aspect: Jennifer investigated crimes with an unearthly edge, and she had been kept busy since joining the covert team.

‘What’s it really like at Blackwater farm?’ she said, cornering her friend in the corridor.

Sue grimaced. ‘It’s a nightmare. Mum and Dad are at complete discord with each other, and Olivia, that’s the twin, hasn’t spoken since her sister disappeared. She’s so solemn, it creeps me out.’

Jennifer loosened the elastic band around her tightly wound hair. ‘It’s bound to be stressful, given what they’re going through.’

’It’s more than that,’ Sue said, her voice low. ‘It’s like the house is alive. Doors slam by themselves, there are footsteps upstairs when there’s nobody around, and there’s this feeling, like you’re being watched.’ Sue shook her head, as if struggling to believe her own words. ‘This afternoon, the light bulb in the kitchen blew. I don’t mean it dimmed, or stopped working. It exploded into a thousand pieces over my head, got in my hair and everything. Frightened the life out of me, it did. I looked across the room and there was Olivia, sitting on the stairs, staring through the banisters with the weirdest expression on her face. It chilled me to the bone.’

Jennifer frowned. Sue was many things, but she was steadfast when it came to her cases. This wasn’t like her at all. ‘Is that why you walked out?’

‘You know me, I’m no quitter. But that house freaks me out. I told the DCI that I was happy to do the investigative work, but someone from Op Moonlight should take the lead with the family.’ She sighed. ‘I know you probably think I’m over-reacting . . .’ Sue said, her eyes searching Jennifer’s for reassurance.

’I don’t think any such thing,’ Jennifer said. ‘What do you think is behind it?’

Sue shrugged. ‘All I know is that things are taking on a life of their own in that house. I was totally out of my depth.’

Jennifer mentally picked through it all while driving to the farm. Were the incidents Sue described a diversion for what was really going on at the family home? It was doubtful that Abigail had run away of her own accord, but in such a remote area, it was equally unlikely to have been an opportunistic snatch. Briefing made it plainly obvious. After six hours missing, they were not expecting to find Abigail alive.