Read The Singing of the Dead Online

The Singing of the Dead DANA STABENOW is the author of nine previous Kate Shugak mysteries as well as two featuring Alaska State Trooper Liam Campbell, in addition to three science fiction novels. A graduate of the University of Alaska at Anchorage with a BA in journalism and an MFA, she won the Edgar Award for her first novel, A Cold Day for Murder, and recently began writing a monthly column for Alaska magazine. Stabenow was born, and still lives in Anchorage, Alaska.

Visit the author at
www.stabenow.com
and St. Martin's Minotaur at
www.minotaurbooks.com
. 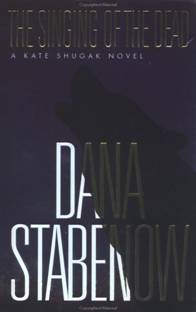 My thanks to Angela Fiori of the Alaska State Archives Office in Juneau, who disentombed the documents concerning the inquest into the death of Mrs. William C. Harp, also known as Alice Astor and born Eugenie Antoinette Felicie Roussey, a real-life good-time girl who served as the model for my own protagonist, and whose 1915 murder remains unsolved to this day;

and to Lael Morgan, whose marvelous book, Good Time Girls of the Alaska-Yukon Gold Rush , first brought Alice and all of Alaska's early working girls to my attention;

and to Pierre Berton, for writing what remains the best account ever of the Klondike gold rush, The Klondike Fever .

The only way I can lose this election is if I'm caught in bed with a dead girl or a live boy. 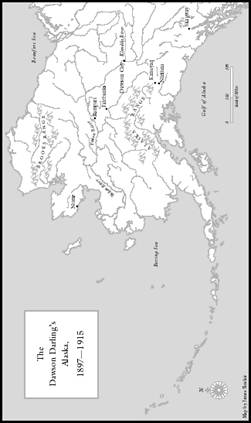 She walked out on stage wrapped in fifty yards of sheer white chiffon, a pair of high-heeled shoes with jeweled buckles, and nothing else.

There was a second of stunned silence in the packed, smoky saloon, before deafening and prolonged approval threatened to raise the roof.

She waited, a faint smile on her face, for the first roar to moderate and pitched her voice to be heard. “Good evening, gentlemen, and welcome to the Double Eagle's Christmas Eve auction.” Her voice was husky, with the slight hint of an accent she tried to control. She let her smile broaden, giving it her special up-from-under and through-the-lashes look, part Madonna, part whore, all woman, and added, “I'm the best present you’ll ever find under any Christmas tree you ever saw.”

This time the stage literally trembled beneath her feet, and she gave a fleeting thought to all the gold dust spilled on the floor this night, now being shaken through the cracks in the floorboards. It wouldn't go to waste. Japanese Jack and Big Ben Bentson would crawl beneath the building the next morning to sweep it up and add it to the night's till. Likely she wouldn't see her percentage, but at the moment she couldn't allow herself to be distracted by that realization.

Big Ben was the owner and Japanese Jack the bartender of the Double Eagle Saloon, doors open around the clock at the corner of Front and York Streets in downtown, boomtown, gold town Dawson City. The Double Eagle was the biggest building in Dawson, the first to add on a second story. It had a long mahogany bar that matched the mahogany wainscoting, eight mahogany gaming tables, a polished brass footrail that matched the brass spittoons, large, elaborate paintings of reclining nudes lit by tiered crystal chandeliers, windows made of stained and beveled glass, and a dozen rooms upstairs with thick carpets, many more mirrors, and furnished with suites in the very latest style. A cleaning staff of a dozen kept the place spotless, although they kept leaving to stake claims in the search for their very own Eldorado.

They were all men, the cleaning staff. Women could do so much better, selling dances for a dollar, a pint of champagne for eighteen dollars, an hour in one of the rooms upstairs for considerably more. Big Ben got fifty cents on the dance dollar, three-quarters of the price of the pint of champagne, and she never told anyone what the split was on the third.

She had been headlining there for the past year, specializing on stage in the Flame Dance that kept two hundred yards of chiffon in the air at one time, and specializing in what one reporter called “the long, juicy waltz” in the clubrooms upstairs. At the end of fourteen months, she had twenty-seven thousand dollars in the bank. She was twenty-two years old, although she admitted to nineteen, and it was her great good fortune that she looked even younger than that. Most laboring men Outside, of any age, were lucky to earn a dollar a day.

She could have kept working for years, especially here, where men outnumbered women six and seven to one, but she had plans, big ones. One more winter, one last contribution to her savings, and she would be ready to move on.

She looked around the room, at the sea of faces upturned to her, and felt that thrill of power she always felt at being the center of so much concentrated male attention. The chiffon began in a spiral of fabric at her ankles and finished up in a graceful swath around her shoulders, the loose end draped over her bare arm. So closely bound together were her feet that she could take only tiny, mincing steps, which was just as well given the height of the heels on her shoes. Big Ben had wanted her to go barefoot, but she knew what the heels did to the line of her legs, displaying their graceful and well-turned length to best advantage, making a man imagine them wrapped around his waist.

One miner had fought his way forward to the edge of the stage. He was ragged, bearded, and smelled as if he hadn't bathed since the river froze over. He looked hungry, and so very hopeless. She gave him a special smile all his own, inviting everything, promising nothing. She was a whore, but she was an honest whore. She gave value for money received, so long as the money was received. That didn't mean she couldn't be kind.

“It's going to be a long, cold, lonely winter, boys,” she said, and there was a shout of agreement. She walked down to center stage and out onto the catwalk thrusting into the room, the little mincing steps causing her breasts to shimmy. The tuft of hair at the vee of her legs was a shadowy patch beneath the chiffon; she put a little extra into the roll of her hips to underline just what was on the auction block that evening.

“For me, too,” she added, pouting, and they howled like wolves on the scent.

Again she felt the thrill, a flush of power that began somewhere low in her belly and spread up her torso and down her limbs. A faint film of perspiration broke out over her skin, and a commensurate low, prowling growl rose from the crowd. She performed a three-quarter turn and paused to cast a roguish glance over her right shoulder. “We have a saying here in the north country, boys. I know you've heard it. The odds are good, but the goods are odd .” She winked a violet eye at one man standing in the back, watching her over a glass of Big Ben's watered-down whiskey. He was a regular of hers, a banker who was as conservative with his own money as he was acquisitive of others'. He hadn't liked the idea of his favorite dance partner taking herself out of circulation for the entire winter, but then he wouldn't be bidding this evening, either. She had no doubt that he was ready to take her evening's earnings in deposit, however, just as soon as it had been paid over and Big Ben's commission deducted. She let one hand skim suggestively down her cocked hip, reminding him of what he'd be missing. His eyes narrowed against the smoke of the cigar clenched in his teeth, and she laughed her husky laugh. “I'm sure you'll agree, these goods aren't the least bit odd.”

Big Ben and Japanese Jack had been priming the bidders for the last week with announcements of the auction, including tantalizing hints as to exactly what skills and services the highest bid would bring. The flyers were papered all over town and every claim from Log Cabin to Circle City. The always needy miners of the Klondike had been quivering for days at the prospect of the Dawson Darling dancing the slow, juicy waltz just for them for six exquisite months. No one would notice the dark or the cold with the Dawson Darling waiting in his bed.

“Here I am, gentlemen,” she said. “It is generally held that my looks are pleasing and that my figure is good.” She waited for the chorus of agreement and was not disappointed. “What are my terms?”

She tossed the end of chiffon over her shoulder, where it trailed behind her like the train of a wedding dress as she walked downstage again. She came to the end of the catwalk and met the fierce blue eyes of a tall blond man standing near the double doors. In a room full of men who wanted her without reservation, the biting intensity of his look gave her pause, but she rallied and held his gaze, a definite challenge in her own. “Terms? Well, I'm willing to sell myself tonight to the highest bidder, to act as his wife in word— ” she paused delicately “—and in deed—” there was another roar “— for the next six months, from this night, December 25th, until June 25th.”

“Start the bidding!” yelled one man who had yet to look above her chin.

“But,” she said, raising one white, well-tended hand without breaking away from the stare of the blue-eyed stranger, “I reserve the right to accept the next lowest bidder if I do not like the highest.” Her eyes lingered on the Greek, who looked at her out of cold, acquisitive eyes that held no lust for her personally, only for the money she could make him when he put her to work in one of his cribs.

“The man who buys me must provide a decent cabin and a good stock of food. I'll cook for him, and I'll clean for him, and I'll—” she paused “—dance for him,” and again, she was forced to wait for the noise to subside.

“But understand this,” she said, smile vanishing, and there was something in her expression that caused all comment to pause. “The man who buys me, and lifts a hand to me . . .”

“We'd fix him for you, Darling, never you worry!”