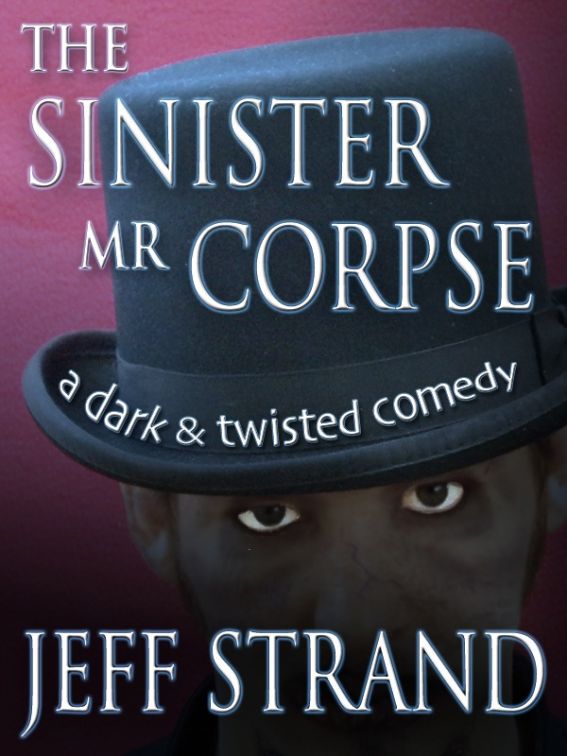 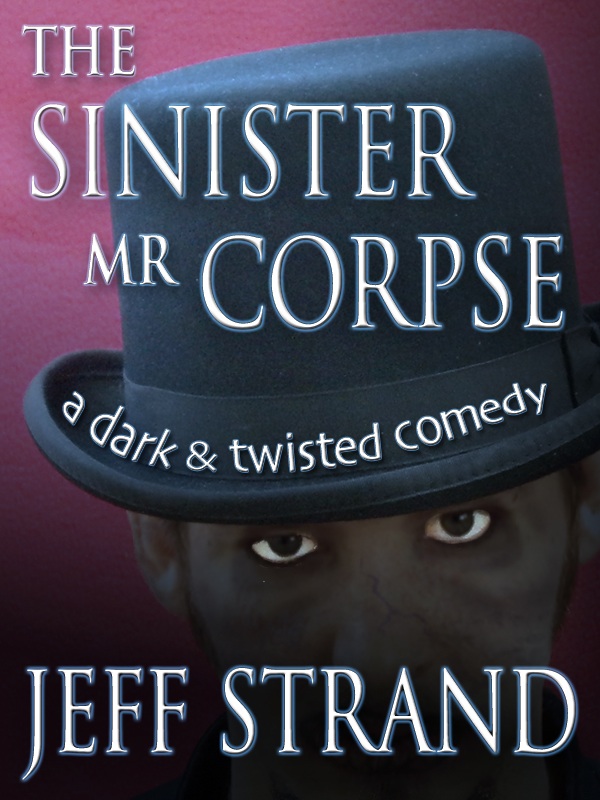 This book is a work of fiction. Names, characters,
places, and incidents are either products of the author's
imagination or are used fictitiously. Any resemblance to actual
events, locales, or persons, living or dead, is entirely
coincidental. No part of this publication may be reproduced or
transmitted in any form or by any means, electronic or mechanical,
without written permission from the author.

Did you notice how I avoided the "living, dead or
undead" joke that gets used all the time in things like this?
That's my commitment to quality. I'm also not going to say "No
zombies were harmed in the writing of this book."

For more information about the author, visit
http://www.JeffStrand.com

Dedicated to my wife, Janice. Here's to many,
many more years of love, friendship, and zombie movies.

"Whooooo-eeeeee, take a look at the size of
that thing, willya?" The elderly fisherman grinned and winked at
the camera as he lifted the thrashing bluegill out of the lake and
into his net. "Now
that
is a prize fish. Just like I said,
all the fancy mechanical lures and baits in the world can't compare
to a good ol' fashioned hook and worm."

He set his pole on the floor of the small
wooden boat and carefully removed the hook from the fish's mouth,
then proudly held his prize, still in the net, up to the camera.
"Sixteen inches. You see, any good fisherman knows that it ain't
about the technology, it's about patience and skill. Yep, patience
and skill."

The fisherman winked at the camera again. He
held the bluegill up to his face and made some kissy sounds at it.
"Betcha wish you hadn't gone for that worm, huh? Not quite as
comfortable in my net as it is in the cool fresh water, is it,
little fella? No, no, no, I'm guessing that you're not a happy
fishie at all right now."

The fisherman stood up, dropped the bluegill,
and stomped on it over and over until it was unrecognizable pulp.
"Die, you wormy piece of filth! Scaly vacant-eyed little bastard!
Die!"

As the fisherman scraped the mess on his shoe
off on the side of the boat, the words "
EXTREME
FISHING
!
" flashed on the screen, with the exclamation
point formed out of fish bones. Then a series of jump cuts set to
heavy metal music: a man gutting a large trout, a topless woman
firing a shotgun into a lake, a man getting his arm bitten off by a
great white shark, two guys burning a fish with lighters as it
dangled from the hook, and a man in a fish costume being severely
beaten with a baseball bat.

"What do you think, sir?" asked Martin Vines,
timidly. He was in his late twenties, wore a long goatee and
wire-framed glasses, and always dressed entirely in green, like a
Bohemian leprechaun.

Stanley Dabernath stared at the blank screen
for a long moment. "Did he really kill that fish?"

"I don't think we can show somebody bashing a
real fish to death. The animal rights groups will have a hissy
fit."

"Do they care about fish?"

"Are you kidding? Those squirrel-huggers get
their thongs in a twist over roaches. I liked the naked chick,
though. We could put her on the front of the box, maybe with
severed fish heads over her nipples. I'd buy that, wouldn't
you?"

"I could be convinced."

Stanley thought for a moment, then shrugged.
"Yeah, let's do it. Fuck the squirrel-huggers. We'll say it was a
CGI fish."

"Set up a meeting with the filmmakers for
tomorrow. Make it late so we can get some booze into them."

"Thanks, Martin. I need to make some phone
calls." Stanley pushed back his chair and stood up. "Keep everybody
out of my office for the next hour or so."

He sat down on his cot, pressed a
snot-stained pillow to his face to muffle the sound, and began to
sob.

Stanley cried and cried, occasionally
pounding his fist against the blanket. How had he ended up in such
a miserable existence? Sixty thousand dollars in debt, evicted from
his apartment, washing his clothes in the bathroom sink, eating
stolen Ramen noodles three times a day...it just wasn't fair. Hell,
the only reason he could work out a distribution deal for the
Extreme Fishing
tape was because he'd be screwing over the
filmmakers on the deferred payment clause.

Demented Whackos Video should have made him a
millionaire. He'd started this business with nothing more than an
e-mail account, the rights to a no-budget zombie flick, and a
$19.95 a month storage unit. Now, three years later, Demented
Whackos Video had thirty-nine offerings in its catalog, but he
could no longer afford the storage unit. The DVDs were stacked in
the trailer's kitchenette.

It just didn't make sense. Cheap horror crap
was supposed to be a sure profit, but nobody was buying it. He'd
fired and rehired his marketing department, Martin, eight different
times and nothing was working.

Stanley sniffled and wiped his nose on the
pillow. Oh well. Times were bad now, but he was not one to give up.
Yeah, it was pathetic that he was thirty-five years old and had to
swipe alcohol from his parents' refrigerator to use in business
meetings, but all he needed was one hit to put Demented Whackos
Video on the map. One sicko product to capture everybody's
attention.

Stanley got off the cot and put his t-shirt
back on. He always felt refreshed after his daily cry. Things would
be improving very soon, he could feel it.

And even though he would be dead within the
next hour, he was right.

Despite his line of business, Stanley had
never given much thought to his own mortality. His only real
concern was that he might be decapitated. He'd read somewhere that
the human head could continue to see for several moments after it
was severed from the body, and that idea seriously creeped him
out.

"What if you were decapitated, but your eyes
were poked out first?" his ex-girlfriend Charlene had asked as they
lay in bed one night. "Would you be cool with that?"

Stanley admitted that he probably wouldn't
care for that scenario either, and then dumped Charlene the next
morning (after the sex).

But beyond the decapitation phobia, Stanley
wasn't one to dwell on his own possible death. Physically, he felt
fine. He got plenty of exercise thanks to not being able to afford
car repairs or gasoline, and had a steady stream of girlfriends.
His love life was perhaps lacking the kinky threesomes with
gorgeous blonde twins that a handsome film distributor deserved,
but he wasn't complaining, save for the occasional comment about
the lack of kinky threesomes with gorgeous blonde twins.

Well, maybe "handsome" was stretching it a
bit, but he certainly wasn't ugly. He had thick black hair, cut
short, and almost perfect teeth in his winning smile. His ears
didn't stick out or anything and his nose was sized just right. If
he had to be truly honest with himself, he'd say that he was
average looking, but at the upper end of average. And despite his
career setbacks and daily wallow in shameful self-pity, he still
managed to project an aura of self-confidence.

Fourteen minutes before his death, Stanley
walked out of the trailer park and along the unpaved street. A good
cry and a long walk each day was what kept him sane.

He walked for a while, lost in thought. He
heard a large truck approaching behind him, and stepped further off
the road so it wouldn't mess up his hair when it rushed by.

Maybe a compilation tape would work.
The
Best of Demented Whackos Video.
He could use clips from
Vampire Splatter
and
The Bloodshot Eyeball
and
The
Mysterious Case of the Chunks of Flesh
and
Put Down That
Chainsaw, I'm Not Made of Wood
and--

Brakes squealed behind him.

Stanley glanced over his shoulder to see the
semi truck weaving off the road, headed straight towards him.

He dove out of the way and tumbled onto the
gravel, scraping the hell out of his arm and the side of his
face.

The semi came to a screeching halt.

Then it started to topple over.

Stanley frantically tried to scoot away from
the falling vehicle and almost succeeded. It struck the ground with
a thunderous crash, landing on Stanley's left foot.

He shrieked in pain.

Cold white liquid began to pour from the
vehicle. Stanley got a huge mouthful of milk and spit it out, but
more and more milk poured upon him. He desperately struggled to
free his pinned foot to no avail. As he screamed, milk filled his
mouth and his nostrils and burned his lungs and his eyes and he
felt himself choke.

And then a moment of peace.

A moment of clarity.

I can't fucking believe I'm going to die
by drowning in milk
, he thought.

Donald Mandigan clenched the microphone
tightly in his left hand, hoping that the beads of sweat on his
forehead wouldn't be visible on camera. This was either going to be
the big break that turned him into a television superstar, or he
was going to look like a complete ass in front of the entire
world.

Please, please, please don't let me look
like a complete ass in front of the entire world
, he
prayed.

Donald took a deep breath. As the floor
manager pointed to him, he addressed the camera.

"Death. Once upon a time, it was thought to
be the end of our worldly existence, at least in our current body.
But has this changed?"

Donald gestured to a steel door in the
hallway behind him. "Behind this very door, scientists are taking
out their felt-tipped red pens and rewriting God's plan. And here,
on live television, you are about to witness it for yourself. I'm
Donald Mandigan. What you are about to see may disturb you. It may
offend you. It may even terrify you. Because tonight you will
witness the very first resurrection of a human corpse, or at least
the first one since that popular Jewish carpenter a couple of
millennia ago."

"Is what you will see tonight wrong? Is it
evil? Is it perhaps even the beginning of the end? I suppose that's
only for the man upstairs to decide."