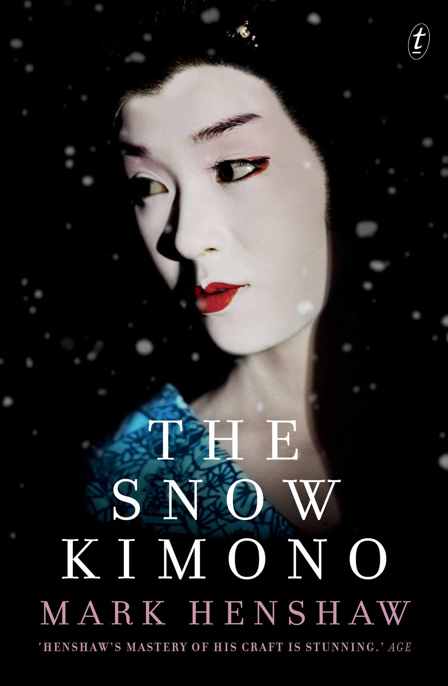 Mark Henshaw has lived in France, Germany, Yugoslavia and the United States. He currently
lives in Canberra. His first novel,
Out of the Line of Fire
(1988), won the FAW Barbara
Ramsden Award and the NBC New Writers Award. It was also shortlisted for the Miles
Franklin Literary Award and the
Age
Book of the Year Award.
Out of the Line of Fire
was one of the biggest selling Australian literary novels of the decade, and is being
republished in the Text Classics series.

In 1989 Mark was awarded a Commonwealth Literary Fellowship, and in 1994 he won the
ACT Literary Award. Under the pseudonym J. M. Calder, in collaboration with John
Clanchy, he has written two crime novels,
If God Sleeps
(1996) and
And Hope to Die
(2007). His work has been widely translated. For many years he was a Curator of International
Art at the National Gallery of Australia. He recently returned to writing fiction
full-time.

The moral right of Mark Henshaw to be identified as the author of this work has been
asserted.

All rights reserved. Without limiting the rights under copyright above, no part of
this publication shall be reproduced, stored in or introduced into a retrieval system,
or transmitted in any form or by any means (electronic, mechanical, photocopying,
recording or otherwise), without the prior permission of both the copyright owner
and the publisher of this book.

First published in 2014 by The Text Publishing Company

I could not have a better companion
with whom to share this great adventure.

I can be sure that even in this tiny, insignificant episode there is implicit everything
I have experienced, all the past, the multiple pasts I have tried in vain to leave
behind me…

If on a Winter’s Night a Traveller

On his return, after many years’ absence, Kenji-san went to see his blind friend.

He told him of Abyssinia, that mysterious land, of his many adventures there.

‘So, Keiichi,’ he said, when he had finished. ‘What do you think of Abyssinia?’

‘It sounds like a magical place,’ his friend said, as if returning from a dream.

The Night of a Thousand Brocades

THERE are times in your life when something happens after which you’re never the
same. It may be something direct or indirect, or something someone says to you. But
whatever it is, there is no going back. And inevitably, when it happens, it happens
suddenly, without warning.

When Auguste Jovert stepped out of his apartment building on rue St Antoine to get
his evening paper, it was dusk. The streetlamps were lit. Rain still fell in a thin
mist. The roads shone. To anybody else it would have been obvious—accidents hovered
like hawks in the air.

As he made his way along the wet pavement, in his coat, his umbrella unfurled above
his head, he was thinking about a letter
he had received that day. It was from a
young woman, someone he had never met before, who had made an extraordinary claim.
She claimed she was his daughter.

He had stood that morning in the cool, empty foyer of his apartment building reading
and re-reading the letter. He did not at first see the small photograph caught in
the corner of the envelope. When he did, he raised it to his face. One look into
the young woman’s eyes and he knew that it was true.

For thirty years, Jovert had worked as an Inspector of Police. Before that, he worked
for the French Territorial Police in Algiers. Recently he had retired, and ever since
then he had had the strangest feeling, the feeling that he was lost. While he worked,
he barely had time to think. Things kept at bay. Now, however, fragments from his
past had begun to replay themselves in his head. It was as if, now that he was approaching
the end of his life, the overall pattern of his existence was about to be revealed
to him. But the moment of revelation never came. Instead, he began to have doubts,
to wake up at night. What’s more, he constantly had the impression that something
was about to happen. Then something did happen. The letter arrived.

It seemed to him later, recalling the accident, that at one moment he had been thinking
about the letter, and the next he was lying flat on his back in the gutter looking
up at the intricate
expanse of the underside of a car. He could feel the heat from
the engine on his face and hear the tiny tinking sounds of its cooling pipes. Odd
drops of water fell about him and onto his forehead. One wheel of the car rested
on the pavement above his head.

In the distance, he could hear the urgent rise and fall of a siren. He turned his
head tentatively to his right. There, suspended beneath the rim of the car, was a
man’s face. He was wearing glasses. His upturned hat lay on the roadway beside him.

The man was kneeling down, staring at him. Jovert saw now that he was bald, that
his perfectly burnished head was studded with thousands of tiny, incandescent hemispheres
of light. He looked from one tiny dazzling world to the next. He saw the man’s mouth
moving. The tip of his tie rested on the wet roadway. A dark circle had begun to
form about his knee. Jovert had wanted to tell him. Then a peculiar thing happened.
All the lights went out.

Two days later, Jovert left his apartment once again to get his evening paper. This
time on crutches. Six weeks, the doctor had said. He had held the X-rays of Jovert’s
knee up to the hospital window. Maybe more, he said.

On his way home, Jovert sat down on the bench opposite St Paul’s to rest. He took
the envelope he had received earlier that week out of his coat pocket, read the address.

He looked at the stamp, brought it up close to his face. Only now did he see that
it had been franked some months before.

He took the letter out and read it through once again. She did not know whether he
was still alive, she said. She had only recently discovered that he was her father.
She wanted him to know that she existed. She did not say why. I make no demands on
you, she wrote. But then, at the end:
Perhaps, if you wanted, you could write to
me
. And she gave him a name, an address—Mathilde Soukhane, 10 rue Duhamel, Algiers.

He took the photograph out of the envelope. He recalled the day almost thirty years
before when he had seen her mother for the first time. It had been in Sétif, in a
narrow side street. He had been walking up the chipped stone stairs. She had emerged
suddenly, like an apparition, from an unseen door in the wall, her dress so white,
so dazzling in the light that it was like some momentary disturbance in the air itself.

Dire Distraction by Dee Davis
You by Zoran Drvenkar
His to Command #6: The Surrender by Opal Carew
Cherished (Adam & Ella) by Trent, Emily Jane
Blood Bond by Heather Hildenbrand
A Hologram for the King by Dave Eggers
El hijo del desierto by Antonio Cabanas
The Death and Life of Nicholas Linnear by Eric Van Lustbader
The Third Sin by Elsa Klensch
Tall, Dark, and Texan by THOMAS, JODI