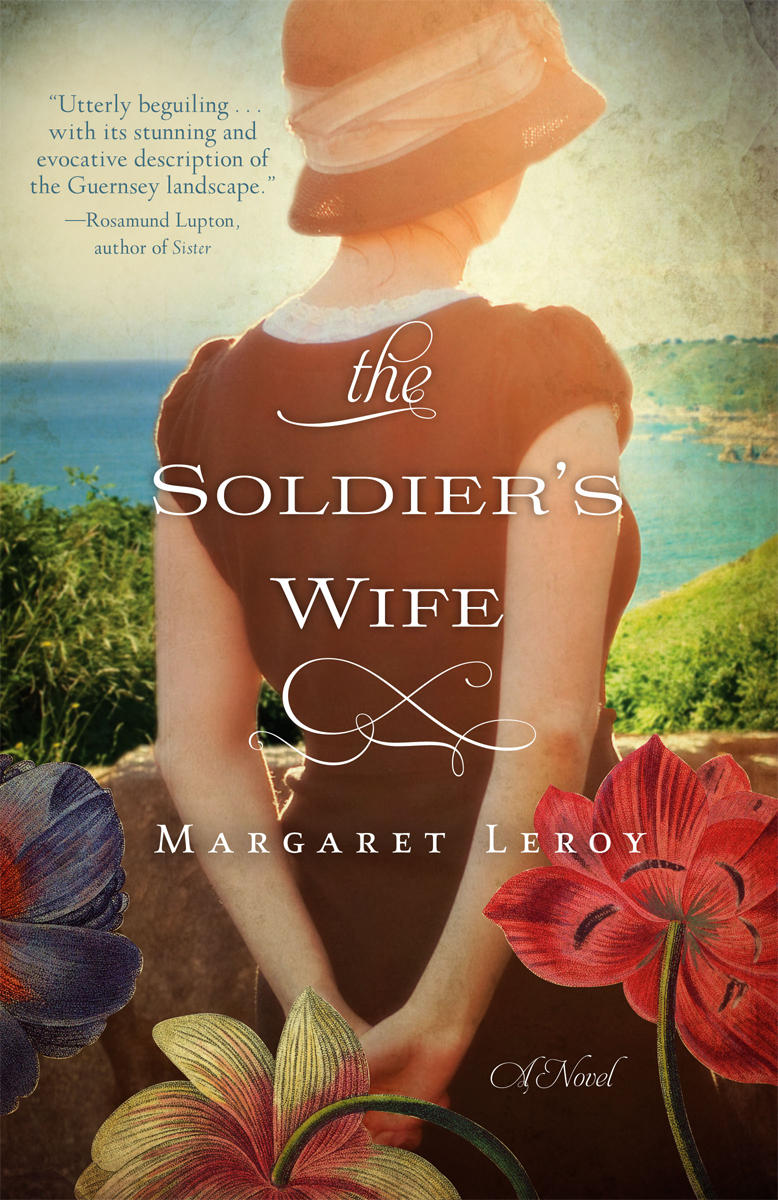 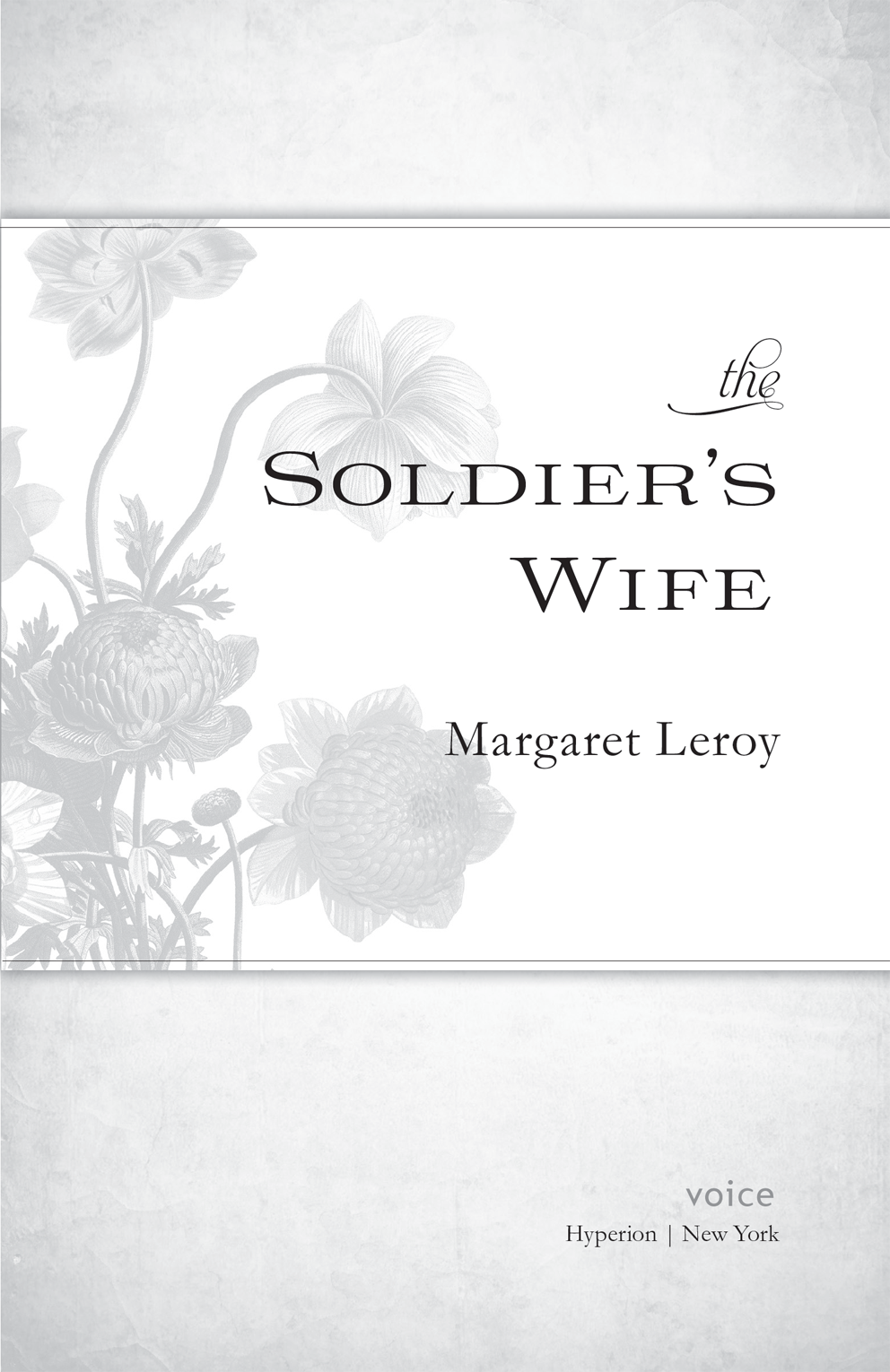 A Conversation with Margaret Leroy 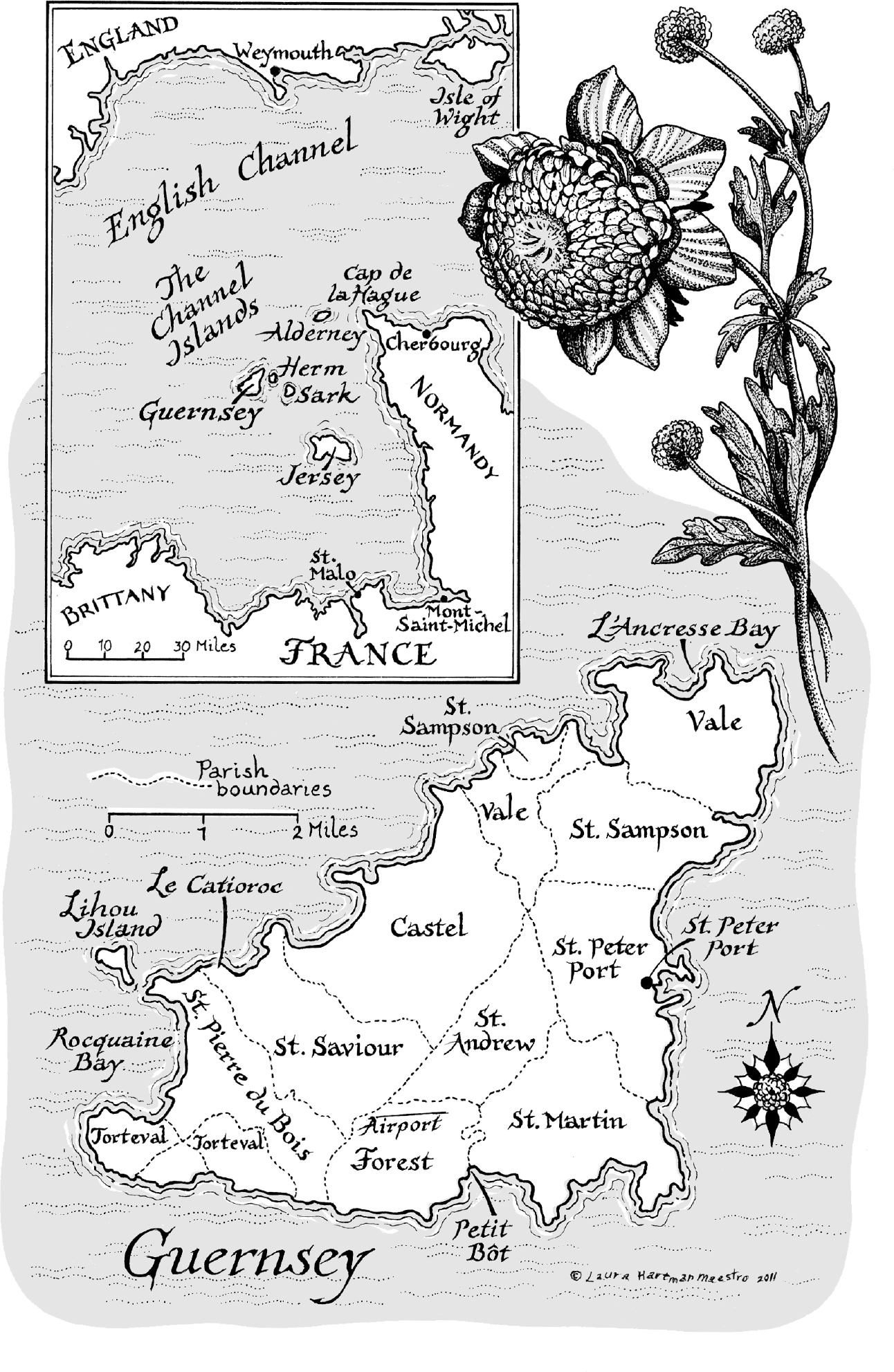 He who wishes to learn to pray,
let him go to sea. 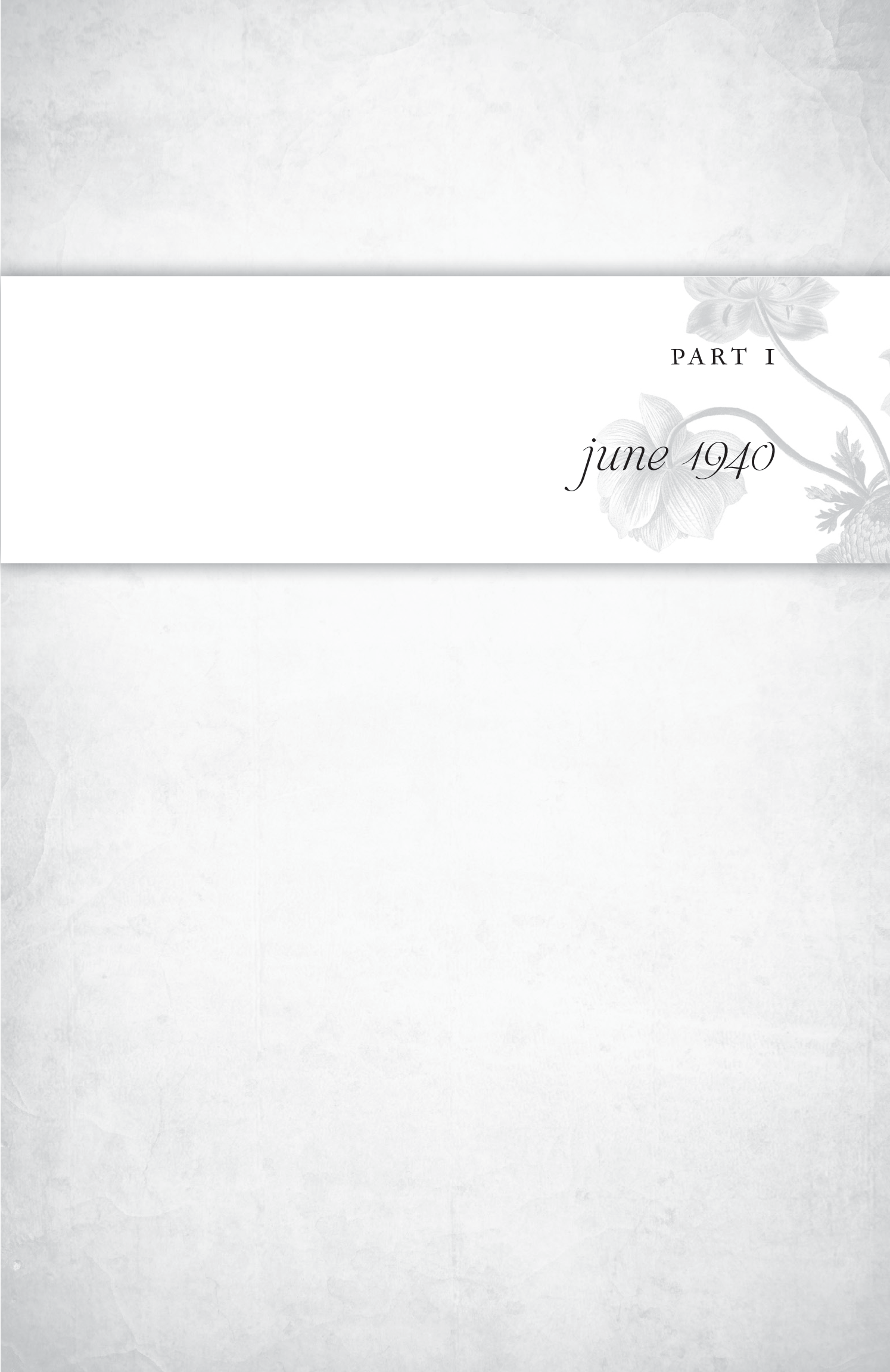 My voice surprises me. It's perfectly steady, the voice of a normal mother on a normal dayâas though everything is just the same as it always was.

“ âEvery night their door was locked, yet in the morning their shoes were all worn through, and they were pale and very tired, as though they had been awake all night. . . .' ”

Millie is pressed up against me, sucking her thumb. I can feel the warmth of her body. It comforts me a little.

“They'd been dancing, hadn't they, Mummy?”

Blanche sprawls out on the sofa, pretending to read an old copy of
Vogue,
twisting her long blond hair in her fingers to try to make it curl. I can tell that she's listening. Ever since her father went to England with the army, she's liked to listen to her sister's bedtime story. Perhaps it gives her a sense of safety. Or perhaps there's something in her that yearns to be a child again.

It's so peaceful in my house tonight. The amber light of the setting sun falls on all the things in this room, all so friendly and familiar: my piano and heaps of sheet music, the Staffordshire dogs and silver eggcups, the many books on their shelves, the flowered tea set in the glass-fronted cabinet. I look around and wonder if we will be here this time tomorrowâif after tomorrow I will ever see this room again. Millie's cat, Alphonse, is asleep in a circle of sun on the sill, and through the open window that looks out over our back garden, you can hear only the blackbird's song and the many little voices of the streams: there is always a sound of water in these valleys. I'm so grateful for the quiet. You could almost imagine that this was the end of an ordinary sweet summer day. Last week, when the Germans were bombing Cherbourg, you could hear the sound of it even here in our hidden valley, like thunder out of a clear sky, and up at Angie le Brocq's farm, at Les Ruettes on the hill, when you touched your hand to the window pane, you could feel the faint vibration of it, just a tremor, so you weren't quite sure if it was the window shaking or your hand. But for the moment, it's tranquil here.

I turn back to the story. I read how there was a soldier coming home from the wars, who owned a magic cloak that could make him completely invisible. How he sought to discover the princesses' secret. How he was locked in their bedroom with them, and they gave him a cup of drugged wine, but he only pretended to drink.

“He was really clever, wasn't he? That's what I'd have done, if I'd been him,” says Millie.

I have a sudden vivid memory of myself as a child, when she says that. I loved fairy tales just as she does, enthralled by the transformations, the impossible quests, the gorgeous significant objectsâthe magic cloaks, the satin dancing shoes. And just like Millie, I'd fret about the people in the stories, their losses and reversals and all the dilemmas they faced. So sure that if I'd been in the story, it would all have been clear to me, that I'd have been wise and brave and resolute, that I'd have known what toÂ do.

“ âWhen the princesses thought he was safely asleep, they climbed through a trapdoor in the floor, and he pulled on his cloak and followed. They went down many winding stairways, and came at last to a grove of trees, with leaves of diamonds and gold. . . .' ”

I love this part especially, where the princesses follow the pathway down to another world, a secret world of their own, a place of enchantment. I love that sense of going deep, of being enclosed. It's like the way it feels when you follow the Guernsey lanes down here to our home, in this wet wooded valley of St.Â Pierre du Bois. The valley seems so safe and cloistered, like a womb. Then, if you walk on, you will go up, up, and out suddenly into the sunlight, where there are cornfields, kestrels, the shine of the sea. Like a birth.

Millie leans into me, wanting to see the picturesâthe girls in their big bright glimmery skirts, the gold and diamond leaves. I smell her familiar, comforting scent of biscuits, soap, and sunlight.

The ceiling creaks above us as Evelyn gets ready for bed. IÂ have filled her hot-water bottle; she can feel a chill even on warm summer evenings. She will sit in bed for a while and read the Bible. She likes the Old Testament best: the stern injunctions, the battles, the Lord our God is a jealous God. When we goâ
if
we goâshe will stay with Angie le Brocq at Les Ruettes. Evelyn is like an elderly plant, too frail to uproot.

“Mum,” says Blanche, out of nowhere, in a little shrill voice. “Celeste says all the soldiers have goneâthe English soldiers in St. Peter Port.” She speaks rapidly, the words rising in her like steam. “Celeste says that there's no one left to fight here.”

I take a breath. It hurts my chest. I can't pretend anymore.

Now, suddenly, my voice seems strangeâshaky, serrated with fear. It sounds like someone else's voice. I bite my lip.

“What will happen to us if we stay here?” she says. There's a thrum of panic in her voice. Her eyes, blue as hyacinths, are urgent, fixed on my face. She's chewing the bits of skin at the sides of her nails. “What will happen?”

“Sweetheartâit's a big decision. I've got to think it through. . . .”

“Shut
up,
Blanche,” says Millie. “I want to hear the story.”

“No, sweetheart. People are sending their children away to the country. The Germans could bomb London. Everyone has gas masks. . . .”

“But we could stay in Auntie Iris's house. She said in her letter we'd be more than welcome. You
told
us. She
said
we could. I really want to go, Mum.”

“It could be a difficult journey,” I say. I don't mention the torpedoes.

Her hands are clenched into fists. The bright sun gilds all the little fair hairs on her arms.

“Well, we haven't got forever.”

I don't know what to say to her. In the quiet, I'm very aware of the tick of the clock, like a heartbeat, beating on to the moment when I have to decide. It sounds suddenly ominous to me.

I turn back to the story.

“ âThe princesses came to an underground lake, where there were twelve little boats tied up, and each with a prince to row it. . . .' ” As I read on, my voice steadies, and my heart begins to slow. “ âThe soldier stepped into the boat with the youngest princess. “Oh, oh, there is something wrong,” she said. “The boat rides too low in the water.” The soldier thought he would be discovered, and he was very afraid.' ”

Blanche watches me, chewing her hand.

“He doesn't need to be frightened, does he?” she says, triumphantly. “It's going to be all right, isn't it? He's going to find out the secret and marry the youngest princess.”

“Honestly, Millie,” says Blanche, forgetting her fear for a moment, troubled by her little sister's naÃ¯vetÃ©. “He doesn't realize that, does he? Anything could happen. The people in the story can't tell how it's going to end. You're four, you ought to know that.”