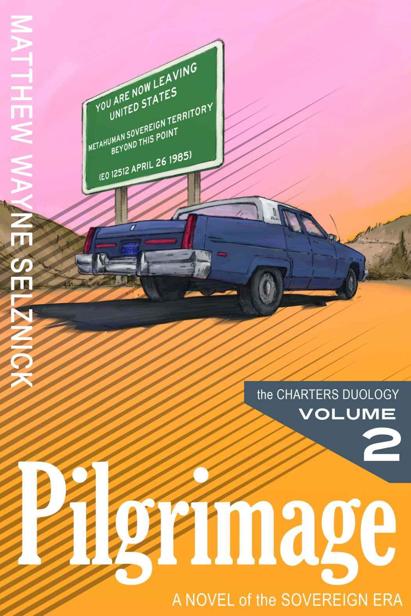 A Novel of the Sovereign Era

Pilgrimage—A Novel of the Sovereign Era

This book is a work of fiction. People, places, events, and situations are the product of the author's imagination. Any resemblance to actual persons, living or dead, or historical events, is purely coincidental.

All Rights Reserved. No part of this publication may be reproduced, distributed, or transmitted in any form or by any means, including photocopying, recording, or other electronic or mechanical methods, without the prior written permission of the publisher, except in the case of brief quotations embodied in critical reviews and certain other noncommercial uses permitted by copyright law. For permission requests, write the publisher at [email protected] with the subject line "Attention: Permissions Coordinator."

This ebook is unencumbered by digital rights management technology. Please remember that this ebook is intended for use by the legal owner. If you acquired this ebook without paying for it, please consider paying for it through an authorized retailer or through the author's web site:
http://www.mattselznick.com
. Visit this blog post for more on Matthew Wayne Selznick's position on unauthorized electronic file sharing:
http://bit.ly/selznickonpiracy
.

Find a typo, continuity error, or other mistake?
Please contact MWS Media at
[email protected]
and let the publisher know about it! We'll confirm it and, if applicable, correct it as quickly as possible. Thanks!

This is for Carmen, who makes it all happen.

This book may never have been written if not for the patient and persistent encouragement and enthusiasm of my community of readers and fans. Their evangelism and support continues to make a meaningful difference in my life and my art.

The following folks were willing and able to materially support the creation of this book through their generous patronage:

This story is largely told through the written journal of Nathan Andrew Charters. I have taken some liberties with the source material in the service of clarity and consistency, but I’ve endeavored to maintain Nate’s voice wherever possible, as this is, after all, his story.

The sections presented from the points of view of other characters are an extrapolation based on interviews, court documents and transcriptions, and the public record, and should be considered a storytelling construction.

(Adapted from a joint report of the Donner Institute for Sovereign Studies and the Office of Science and Technology Policy, November 14, 1985.)

The variety of Sovereign metahuman abilities is apparently without limit. However, we recommend the adoption of classification of Sovereign abilities for the purposes of defining and quantifying the Sovereign phenomenon.

Latent
Individuals appear physiologically identical to baseline humans. While psychological or physical stress may cause some individuals to manifest abilities of a different, higher ability class, most live their lives without realizing their potential.

There may be as many as 3,000 latent Sovereigns in the human population.

Nominal
Individuals possess minor psychic or physical abilities outside of the human baseline.

Psychic abilities provide measurable, reproducible results more reliably than could be predicted by statistical chance. Physical abilities are expressed through one to three specific characteristics that fall outside the measured human baseline. Abilities are usually passive in nature and personal in range.

Approximately 35% of all Sovereign belong to the Nominal ability class.

Standard
Individuals possess a “suite” of related psychic and/or physical abilities with a localized range. Physiological adaptations that support the ability suite may also be evident.

Passive and active abilities are found, with range limited to the immediate vicinity and restricted to line-of-sight.

Approximately 3% of Sovereign can be classed as Standard.

Exceptional
Exceptional-class Sovereigns also possess passive and active talent suites, but at a greater power level. Range is limited to a localized area around the individual, and targets (if any) must be in line-of-sight.

About 1.5% of all Sovereign can be classified as Exceptional.

We estimate the existence of no more than two dozen Titan-class Sovereigns.

Paramount
The Paramount class is defined by Sovereigns whose psychic or physical abilities have little or no discernible thematic connection. Paramount class abilities are demonstrably unrestricted in terms of power level or range.

Further, Paramount-class abilities appear to defy the laws of physics and our definition of reality as currently understood.

At this time, one Paramount-class Sovereign has been identified: Doctor William Karl Donner.

From The Journal Of Nate Charters – One

About a year later, I was a celebrity.

It was bad enough people would do a double take when they saw me in the grocery store, or passed me on the freeway. I was used to that. It’s how it’s been my whole life. When you look like me, it’s just what happens.

A year after Declaration Day, I was lucky if I didn’t see myself as a badly airbrushed artist’s rendition on the cover of
The Weekly World News
in the checkout line.

Me and Bat Boy, tabloid superstars. Except he’s not real.

Hard to know for sure, these days.

On Friday, April 11, 1986, a week before the first anniversary of Declaration Day, the lawyers decided it would be a good idea for me and my mother to be guests on
The Azarrio Show.

So there I was, Nathan Andrew Charters: household name, boy freak, full-on metahuman and fake Sovereign, roasting under the lights and sweating in a big sticky vinyl chair across the stage from the parents of my childhood rival, who were also trying to sue me and my mother into the poorhouse at best or help the feds throw us in jail at worst.

My throat clenched as the host, Hank Azarrio, strode across the stage. “Okay, gang… we’re back from commercial in thirty seconds.” He oozed an oily, gunky stink of hairspray, sweat, makeup like swampy clay, and really terrible cologne. I was the only one in the room bothered by that, of course. Just one of my little gifts. “Everybody all set?”

My mother’s “Yes” slipped out of pursed lips. She had righteous indignation to maintain.

Marc Teslowski, doughy and pink, nodded his square head up and down and blinked his piggy eyes. His wife, Jeri, was either terrified or starstruck or maybe both. She smiled with her lips closed and bounced her clenched, knobby little fists in her lap.

Our lawyers straightened their ties and stuck out their chins. The firm had sent Drake Ottman, a young dude with a soap-opera name, to sit in our corner. The name of Teslowski’s guy had slipped out of my head a second after I broke off our cold handshake.

What did stick with me was how he’d tried to avoid my fingernails by curving his hand, even after I’d gone to the trouble of clipping and filing them down for the occasion. I scared some folks. This guy was part of that club.

It bugged me, sometimes. Not so much, that day.

The red light over the studio audience blinked. Azarrio ran his hand lightly across his salt-and-pepper-and-cement hair, licked his bushy gross mustache with a thick, pale tongue, and addressed the live camera.

“We’re back on
The Azarrio Show
with four people at the center of a controversy directly connected to the story of the century: the remarkable phenomenon of the Sovereigns.”

Azarrio indicated me with a wave of his hand that pushed his stench up my sinuses. I suppressed a gag. As much as I didn’t want to care, I tried to look cool when one of the cameras zoomed in on my face.

“This young man, despite the fact that he probably needs no introduction, is Nathan Andrew Charters—your friends call you Nate, though, right?”

All the makeup in the world couldn’t hide the acne-scar pockmarks cratering his cheeks. I wondered if that acne had made him a pariah when he was a kid the way my… nature… had made me. I felt the corners of my lips twitch up at the thought of a junior Azarrio having his backpack emptied into a trash can.

Azarrio’s eyes narrowed slightly, but the grin beneath his bushy lip stayed steady.

“Nate, here, is at the center of an ongoing legal battle that has captured the fascination of the entire world. How does it feel to get all that attention, Nate?”

Fine. I was getting really good with confrontation.

Imagining my girlfriend, Lina, in the front row of the studio audience of housewives and unemployed middle-aged twits, I pushed down a little flurry of butterflies in my belly and kept my eyes on Azarrio and off the cameras.

“Are you asking how it feels to know the same people who turned my dad into a crazy freak and then tried to kill him are trying to pin two murders on me and him and my mom?”

Azarrio’s eyes glittered. It occurred to me that I was feeding him just what he wanted, but screw it. This whole thing was lame. In for a penny, or whatever.

“I guess it’s gonna feel great, once those people end up in prison and PrenticeCambrian and the government cut us a big check and stuff.”

Red light for me, green light for Azarrio. He addressed the camera.

“Nate’s referring to allegations from PrenticeCambrian—which, by the way, the powers that be want me to mention, is the parent company of some of our affiliate-station sponsors—that his dad, the former scientist Andrew Charters, killed two PrenticeCambrian employees and that Nate himself assaulted a high-ranking executive of PrenticeCambrian subsidiary Tyndale Labs.”

My mother’s scent drifted on the currents of the studio air-conditioning. It was barbed with tension.

“Call them what they were.”

She leaned forward in her chair. I imagined someone in the control room giving the word to put her on camera. “Assassins.”

“Alleged assassins, as I’m sure PrenticeCambrian’s legal team would want us to note.” Azarrio wore a mask of concern and empathy that didn’t match his almost-predatory scent.

I wondered if that was what this was for him—if he looked at his guests like prey to corner so he could extract reactions that would bring high ratings for his time slot.

I hoped my mother kept it together, even if I felt my own irritation scratching like bugs multiplying under my skin.

Necropolis by S. A. Lusher
Darling Jasmine by Bertrice Small
Red Hourglass by Scarlet Risqué
Enslaving the Master by Ann Jacobs
Tanner's Scheme by Leigh, Lora
With Cruel Intent by Larsen, Dennis
Birthdays of a Princess by Helga Zeiner
Stuka Pilot by Hans-Ulrich Rudel
One Kiss: An Apocalyptic Urban Fantasy (Transmissions from The International Council for the Exploration of the Universe., #1) by E.J Kimelman, Emily Kimelman
Insolent: The Moray Druids #1 (Highland Historical) by Kerrigan Byrne