Read The Space in Between Online

The Space in Between 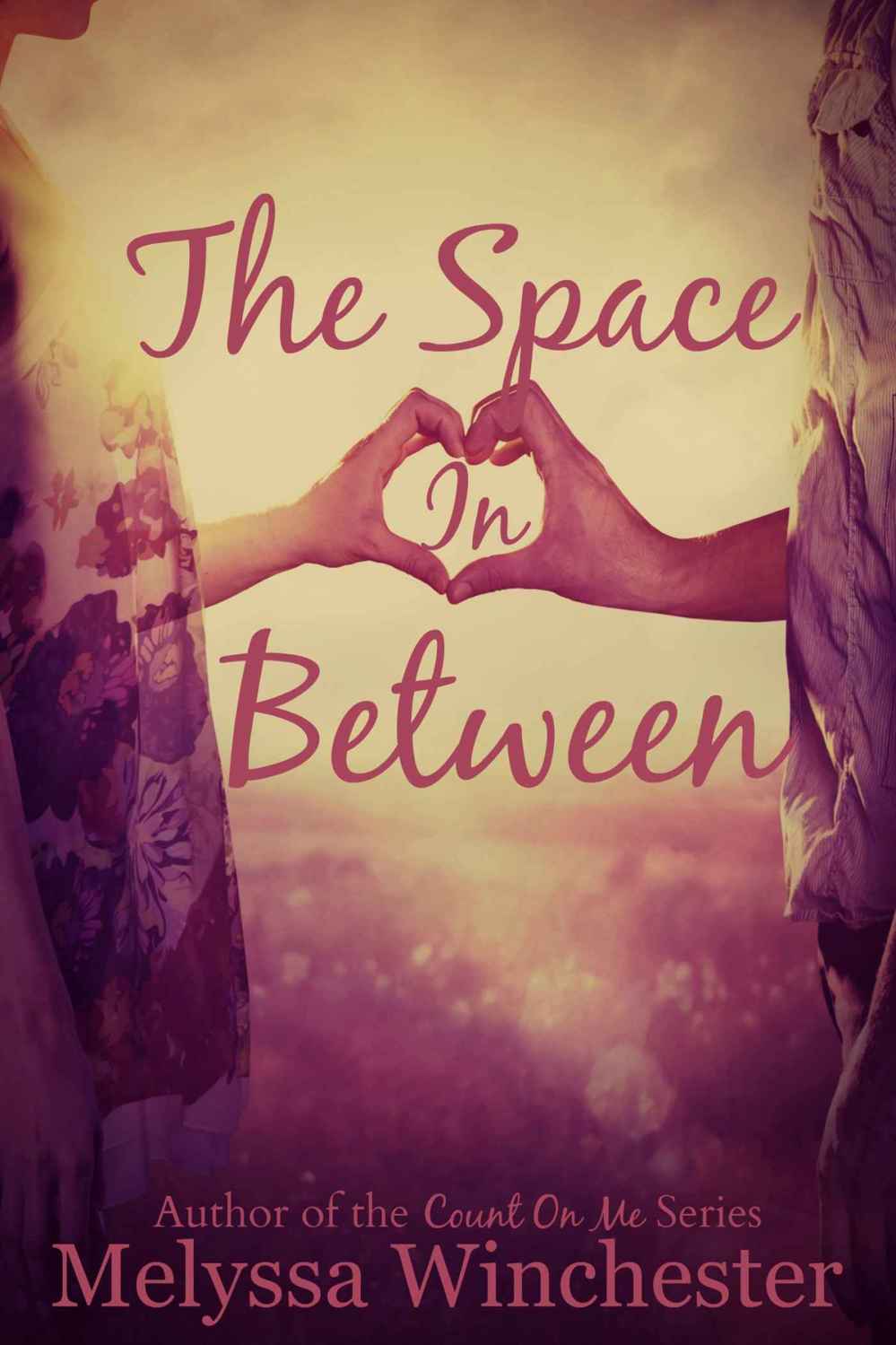 The Space In Between Playlist

The Space In Between

All rights reserved. No part of this publication may be reproduced, distributed or transmitted in any form or by any means or stored in a database or retrieval system without the prior written consent of the Author.

This is a work of fiction. Names; characters; places and incidents are the products of the author’s imagination or are used fictitiously. Any resemblance to actual events, locales or persons living or dead is entirely coincidental.

“Being deeply loved by someone gives you strength, while loving someone deeply gives you courage.” – Lao Tzu

I don’t know when it happened, but somewhere between the start of senior year and the spring leading into graduation, my life was hit with a blast of nuclear proportions.

Now, standing here in the aftermath, I’m trying to make sense of it all and coming up empty.

The summer of 2014 came and went the same way the last five or so have always gone, and honestly, I wasn’t expecting it to be much different when I went back to walking the halls of Greenville High in September.

Sure, I was about to be a senior, which meant I would be one of about two hundred or so kids running the school, but if there’s one thing that the entire world seems to have not gotten the memo for, it’s how unimportant all of that is to me.

So with an uneventful summer behind me, and what was sure to be the longest year of my life on the horizon, I prepared to spend another year under the radar. Watching as the same idiots annoyed the freshmen and the cheerleaders did everything in their power to exert their dominance while I stayed in the background aiming my lens in their direction to document it all through pictures for the yearbook and school paper.

I wasn’t one of those ugly ducklings you read about that the popular guys use to make themselves look like even bigger jerks. I wasn’t even unpopular or a wallflower. I just had more fun taking pictures than I did being part of the drama that four years of high school is guaranteed to create.

At least I was until a new guy stepped out of a Crown Vic on the first day.

It’s always a guy isn’t it?

An ordinary girl on the fast track to any school of her choosing, a long career as a photographer in her future, always seems to get tripped up by the guy.

I know, I know.
All the girls say that too. Thing is, I really mean it.

He’s also the guy that in a few months, despite how much I love him and how deep we’re in this thing together, is going to be off limits.

You see, Christian Cayne isn’t just a guy. He’s not even some guy I met the first day of senior year and later fell in love with.

I wish it was that simple. It would make what’s gotta come next a whole lot easier.

Christian Cayne is a lot of things to a lot of people, but in a couple of months, he’s going to have to be one thing only to me.

But to get to where we are now, you’ve gotta fully understand how we got here to begin with.

So sit back and let me tell you the story of my life, or with the way it feels right now, what could very well be the end of it.

You know what blows?

There’s a lot honestly, but being woken up at the crack of dawn on the first day of summer vacation just to be told you’re moving, pretty much takes the gold.

I didn’t have anything going on that this news messed with—other than what I think was a pretty wicked dream—but when you’ve spent seventeen years in the same house, surrounded by the same people, places, and things, it’s a sucker punch to the gut when you’re told it’s all going to change.

Truthfully, I was expecting this about four years ago, and when it never came, I resigned myself to the fact that I’d be living in the haunted house forever.

It wasn’t always like that. My house used to be a happy place. Bright, upbeat and full of life.  It was only after my mom got sick and my dad took a leave of absence from the force to take care of her that it turned into the way it is now.

Yeah, you heard right.  My dad’s a cop. A fact that for the first few years after I started school made me a narc. Sometimes, when people are feeling especially jealous, I still am one.
Whatever.
I’d rather be a narc than the one sitting in the back.

But wait.
I’m getting off topic.

As far back as I can remember, my mom was a heavy smoker and because of this, caught colds faster, had sore throats that lasted forever, and experienced other aches and pains more than the average person. It never seemed to phase her. At least it didn’t until the one time she couldn’t kick it and took her concerns to the doctor.

That was the day everything changed, and the start of what would eventually take her life.

For years after she was diagnosed, we stayed by her side, powerless to do anything but make her as comfortable as possible. Watching as she quit her job as a first grade teacher, ending up confined to her bed because she was too weak and sick to do much else. At least we did until her permanent bed became of the hospital variety and then, months later, a casket six feet under.

The day the music died for the Cayne family, and the period where I expected my dad to finally break and move us out of the house that was smothering us in memories.

A move that never happened.

Instead, I got to watch him drown in his grief by hiding away in his room every night when he thought I was asleep, breaking down and crying. Things he couldn’t show me because of some warped idea that a man breaking down was a sign of weakness.

The reality being, he shook the walls with his pain and taught me that even the strongest people, in an attempt to seem okay, can break when they lose their heart.

So now we’re driving along after leaving our half empty apartment and he’s taking me—in his damn cruiser of all things—to the place I’m going to call home for my senior year, and I’m just wishing he’d turn the damn car around and go home.

“I know this isn’t how you envisioned spending your final year, Chris, but I think once we’ve settled in, you’ll end up liking it here.”

As he’s talking, I’m visualizing every single time I’ve heard those same lines in a movie or read them in a book. I never took him for the type to do that, quoting cliché lines, but apparently, I didn’t give him enough credit.

What he doesn’t get is, as happy as I am that we’re out from under the memory of my mom that haunted our house after she died, I’m pretty sure I’m never going to like it here.

For the next year though, I’m gonna do a damn good job of faking it.

Grunting my reply, he chuckles to himself and before I can sit back, get comfortable and just enjoy the rest of the ride, he’s pulling the car to a stop.

Greenville High
.
Home to the Razorback’s football and hockey teams, and what’s sure to be the longest 190 days of my life.

“I know you hate this, but will you at least promise to give it a try?” he asks the second my hand goes for the door and what is my escape from this conversation.

“There’s always a choice, Chris, but it was time.”

He doesn’t need to say anymore. I get it. It was time four years ago if I’d been asked my opinion, but whatever. I know the drill. I won’t do anything to make him or myself look bad.

At least not yet anyway.

That’s another thing I didn’t mention with my little replay earlier. I made a promise to my mom the day they lowered her into the ground, and it’s one that up until this exact second in the car with my dad, I’ve stayed true to.

I will not make a fool of either of them. She might not be here physically, but I’ve been through enough church with both sets of grandparents to know that she’s upstairs watching, and I can’t have her seeing me act like a moronic jackass.

The world’s full of enough of those. For her, and even a little for my dad, I want to be better than that.

“Thanks.” he answers and I swear I see the weight disappear off his shoulders with my compliance. “You all straight on getting home?”

Chuckling, he hits me with a final slap on the shoulder and I finally get the breath of fresh air I’m after as I slide the car door open and slip out.

“Can’t blame your old man for being concerned.”

“Actually, I can. If you’re spending all your time worried about me, you’re not gonna be focused at work, and as ready as I am to be out on my own, I’m not a real big fan of being an orphan.”

“Very funny, but fine. Message received loud and clear. No worrying about my kid.”

Grabbing my bag off the seat with a grin, I shut the door and watch as he peels away slowly from the curb, turning only when I’ve watched him drive out of sight. With a sling of my backpack up and over my shoulder, I start taking the first tentative steps toward my new academic home. Straight into the path of an oncoming cyclist.

Frozen in place, only able to watch as the train wreck unfolds in front of me, the person calls out before swerving away, the bike wobbling as it loses balance, until the body tumbles off and hits the ground with a resounding thud.

As the rest of her statement—the voice easily discernable as female—gets muffled as she buries her face in her hands, my legs suddenly find their footing again and I move as fast as I can, not even concerned about what I’ll find when I do.

Fantastic start to your first day, idiot. Maybe focus on what’s going on around you next time.

As my knees hit the pavement, I lean over the moaning body of the girl that I’m sure once she catches sight of me, is going to kick my ass six ways from Sunday, and pray that the fall didn’t do any permanent damage.

“I’m sorry.” I run with first, and when I slip my hand out until it finds hers and grip it, bringing her to a sitting position on the ground, I go for broke. “I was so busy trying to talk my dad off a ledge, I wasn’t paying attention. Are you okay?”