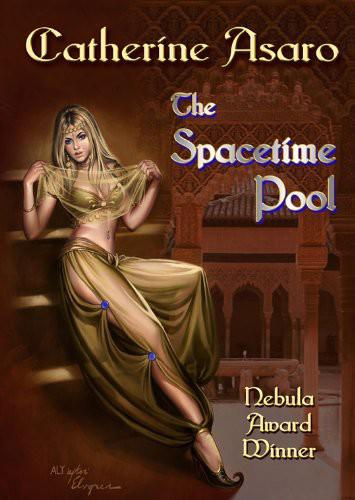 History is
a deep and complicated puzzle—especially when it involved more dimensions that
time.

Janelle peered at the
distant hill. She could have sworn a person had appeared there—and disappeared
just as fast. Perhaps it was a trick of the wind. The rhododendron bushes on
the hillside where she sat undulated in the breezes like a dark ocean frothed
with purple flowers, and a hum of cicadas filled the air. The Great Smoky
Mountains rose in the distance, green and gray against a late afternoon sky as
blue as a cerulean glaze.

She shifted her
weight uneasily, wondering if she should have come out here alone. Her hair
blew across her face in a swirl that reminded her of yellow corn in the fields
back home. The breeze whispered against her arms and rippled the summer dress
she had worn instead of sensible hiking clothes. Right now she probably
resembled some forest creature more than a new college graduate. She smiled at
the image that conjured up: Janelle the wild-woman stalking into math class,
strewing leaves and equations. Then her disquiet returned, like a hawk gliding
in the sky, circling a rabbit, ready to plunge.

“Oh, stop,” she
muttered, annoyed at herself. She pulled her hair out of her face. Birds
wheeled above the figure on the next ridge—

Someone
was
there. She strained to see better. A man was standing on that hill with his
back to her. As she rose to her feet, he turned in her direction.

Then he compressed
into a line and vanished.

Whoa. Janelle
squinted at the hill. She must have mistaken whatever she had seen. She had no
wish to share her solitude, but curiosity tugged at her. She hiked up the hill,
headed back to the trail, uncertain whether to investigate the vanished fellow
or return to her car. Although it would take thirty minutes to reach the
parking lot, she should probably go back; the afternoon had cooled as it aged,
and her flimsy dress couldn’t stave off the chill. Seeking an escape from her
hectic life, she had left her cell phone and purse in the car, taking nothing
more than her keys.

The leafy canopy of
an old growth forest arched above her. Wood chips crackled under her feet, and
a red squirrel skittered up the trunk of a basswood. Stretching out her arms,
she turned in a circle, her eyes closed. Sweet blazes, she loved these
mountains. Laughing, she opened her eyes. Life was good. She had finished her
math degree at MIT just a few days ago, and it felt great.

Like a shift in a sea
current, her mood changed. She had no one to share her happiness. It had been
two years since her father’s assassination in Spain. Her mother and brother had
unexpectedly joined him for lunch that day, and the explosion that destroyed
his car had taken them as well, her entire family. Even now, the pain felt raw.

Janelle inhaled
deeply. She would survive this moment, as she had all the others, until the
grief became bearable.

What the...?
She whirled around.

A man stood several
paces away. He resembled the figure from the hill, though she hadn’t seen him
well enough to be sure this was the same person. She stepped back. He had only
said her name, but given that they had never met, that was plenty to make her
nervous.

His presence did
nothing to allay her unease. He was too tall, maybe six foot six, with a
muscular physique that reminded her of her vulnerability. His clothing was
strange. She had nothing against unconventional self-expression, but in some
subtle way, this went beyond that. The blue of his shirt vibrated in the
shadowed forest, as vivid as an ocean where sunlight slanted through the water.
His black pants were tucked into black boots. Silver links set with abalone
gleamed on his shirt cuffs and in the silver chain around his neck.
Well-trimmed hair brushed his shoulders, glossy and black. It wasn’t the length
that surprised her, but the gray at the temples. Although obviously hale and
fit, he seemed rather old to adopt such styles. Then again, just because she
knew no one his age who made such fashion statements, that didn’t mean it never
happened.

What compelled her
the most, though, was his face. His high cheekbones and strong nose, and the
dark brows arching above his gray eyes, made her think of a senator in the
Roman Empire. He projected a sense of contained force.

Then she saw what
hung from his belt. Ah, hell.
Dagger
was too tame a word. The sheath for
the knife stretched as long as her forearm.

“I didn’t mean to
startle you.” His gravelly voice had an unfamiliar accent, harsh and throaty. “You
are Janelle Aulair, aren’t you?”

She stood poised to
run. “Why do you want to know?”

With relief, she
realized what must have happened. Ben, the grocer in town, had sent him to
check on her. Ben always worried when she came up here alone. The last time he
had sent his sister and brother-in-law, and they had startled her the same way.

“Have we met?” she
asked. “At Ben’s?” She thought she would remember someone so striking, but
maybe not.

“Never,” he said.
Then he added, “Destiny requires your presence,” as if that explained
something.

Destiny indeed. She
should get back to her car. He hadn’t threatened her, but if that changed, she
could surely outrun someone his age. She stepped to the side—

“No, wait!” he said,
lunging forward.

Startled, she jumped
away—

Darkness enveloped
Janelle, muffled and cold. Muted voices echoed, calling, fading. Then the light
brightened. She stumbled on the sand and barely caught her balance.

A white beach
stretched around her, dazzling in the bright day. Waves crashed a few yards
away, and their swells glinted in the slanting rays from the Sun, which was low
in the sky. The ocean stretched to the horizon, wide, blue, and endless.

“What the blazes?”
Janelle spun around—in time to see the man appear out of thin air.

He came out of
nothing, taking a long, slow step. His progress was slowed to a surreal speed,
and his body flickered as if he were a projection of light. It
couldn’t
be real. He had to be doing this with mirrors. Either that, or she had
overworked herself in school more than she realized, and her mind was lodging a
protest by wigging out.

The man solidified.
For a moment he just stood, focusing on her. He seemed as disoriented as she
felt. The large tendons in his neck corded under the chain he wore, and the Sun
caught gleams from the abalone. The metal looked like real silver. The contrast
of his powerful build and the jewelry unsettled her; no one she knew wore such
items, let alone a man this daunting. It wasn’t right or wrong, just eerily
different.

“Are you all right?”
he asked.

What a question. Her
heart rate had ratcheted up and her head was swimming. “Is this a movie set?”
If he had equipment to create this illusion, she should have seen it, but she
grasped at the possibility like a swimmer clutching at driftwood in the ocean.

“A moving set? No.”
He rested his hand on the hilt of his knife and scanned the area. “Did anyone
see you?”

She glanced at the
knife, then at his face. “I don’t want trouble.”

“Nor do I.” He
stepped toward her. “We shouldn’t stay here.”

She stepped back. “Why?
Where is this? What happened to the mountains?”

He spoke carefully,
as if she were breakable and his words were hammers. “They are elsewhere.” He
indicated a line of straggly trees up the beach, where the sand met a sparse
forest. “We must go. We will be safer if we aren’t in plain view.”

“Safer from what?”
She wasn’t going anywhere with him.

“Raiders.” He scanned
the beach, poised as if he were ready to fight. Wind blew his hair back from
his face, accenting his prominent nose and strong chin. His profile looked like
it belonged on a coin. “We must leave before they come.”

He turned toward her
and she was acutely aware of his height. Large men rattled her. They lived in
another dimension, one where you could use the top of bookcases and see over
the heads of a crowd. They loomed, and he was doing it much too well.

“I’m not sure you can,”
he said. “This last time, I barely made it through before the gate closed.”

“What gate?” Sweat
was gathering on her palms. “Who
are
you?”

“You may call me
Dominick.”

“What do you want
with me, Dominick?”

“You are part of a
prophecy,” he said, as if that were a perfectly reasonable statement. “Before
my brother or I was born, it was foretold that whichever of us married you
would kill the other.”

Marriage and murder.
Right. She should have listened to Ben and not gone hiking alone. “Don’t play
with me.” Her voice cracked on the last word.

His strong features
softened unexpectedly. “I am sorry. I didn’t really expect the gate to open.”

“My friends are
waiting for me.” She was talking too fast. “If I don’t show up, they’ll phone
the police.” In truth, no one expected her for days. But he didn’t know that.
She hoped.

As Janelle whirled to
run, the sand shifted under her feet and she tripped. Dominick easily caught
her. Twisting in his grip, she raked his arm with her fingernails, and the two
of them nearly fell into the sand. He ended up swinging her in a circle with
one arm around her waist. He wrapped the other arm around her torso, pinning
her while he bent over to hold her in place. He felt as if he were built from
iron. She struggled, and he tightened his hold.

“Janelle, listen.” He
spoke urgently. “I won’t hurt you. But if we stay here, we could be killed.
Outlaws have been raiding homesteads in this area. You’re a beautiful woman. If
they find you with no defense except me, you would be in far worse trouble than
you think I might cause you. And I would be dead.”

She didn’t want to
listen. But she had to do something. What if he was telling the truth? What if
he
wasn’t?
If she made the wrong choice, could one or both of them end
up dead?

She took a deep
breath. “All right.” For now.

He released her, then
grasped her upper arm and set off for the trees. She had to run to keep up with
his long-legged stride. So much for her assumption that age would slow him
down; he could easily outrun her. His large hand engulfed her arm. His grip
could have bruised, but he didn’t let it. The contrast between the contained
violence of his personality and his careful touch confused her.

The fine-grained sand
showed little trace of their progress. They soon reached the forest and strode
under its sparse cover. He kept up the grueling pace as they plunged into the
deepening woods, until a stitch burned in her side.