Read The Story of Ireland: A History of the Irish People Online

The Story of Ireland: A History of the Irish People 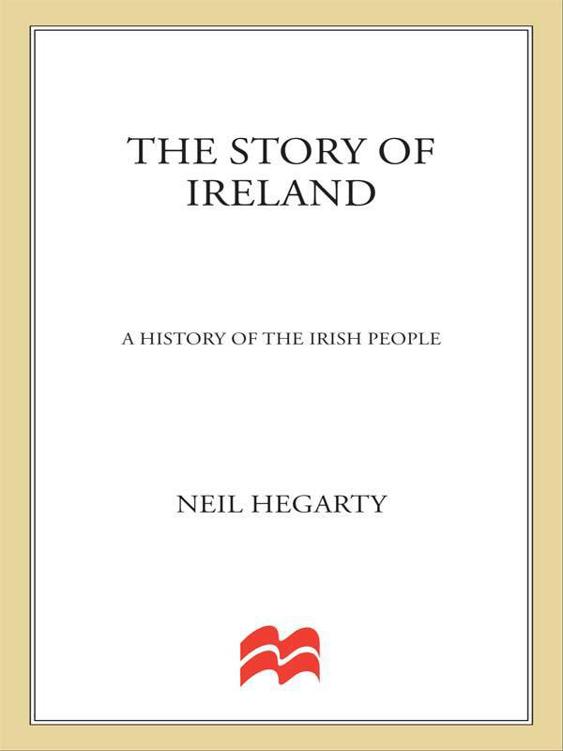 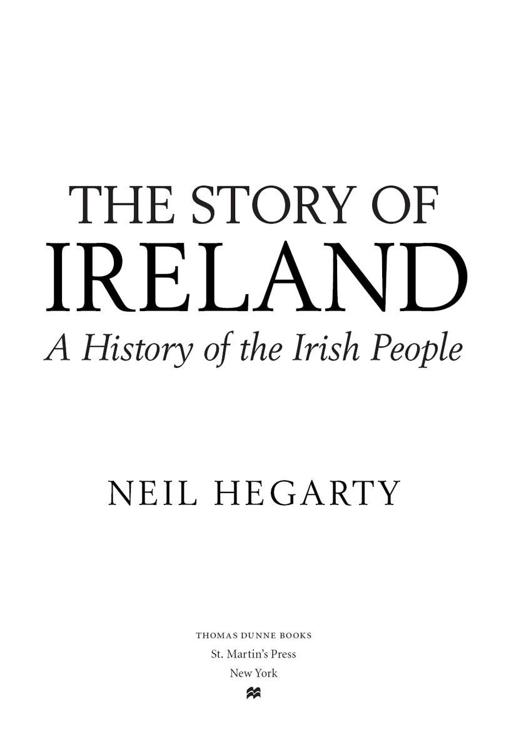 They are begging us, you see, in their wordless way,
To do something, to speak on their behalf
Or at least not to close the door again.

Chapter One: Children of God

Chapter Three: The Lordship of Ireland

Chapter Thirteen: Between Here and There

As a foreign correspondent I am naturally inclined to view the world as a place where the histories of different peoples continually bump up against each other; where trade and culture, great migrations, revolutions, the rise and fall of empires constantly alter the patterns of settlement, belief and identity. Whether standing in a remote Angolan town looking at the ruins of an old Portuguese cinema, watching the British flag being lowered for the last time in Hong Kong, or listening to the Inuit in the Canadian high Arctic recall the stories told by their ancestors of the coming of the white man, I am struck by the connections, both intimate and grand, that are braided through the histories of vastly different peoples.

When asked to write and present
Story of Ireland
for BBC Television and RTE I wanted to describe the role of events beyond our shores in creating the Ireland of today. In recent times the multi-billion euro international bailout highlighted the intermeshing of Ireland’s economy with the rest of Europe. This is not to claim the Irish narrative has been entirely directed by outside forces. As those who read this book and watch the television series will see: this is above all the story of Ireland. But that story repeatedly intersects with, and is shaped by, the story of other peoples and nations.

Nothing reduces me to despair more than a vision of Irish history that reduces the debate about the past to a simple paradigm of the Irish versus the English, who was right and who was wrong, as if history could be reduced to a crude morality play. As this book will show, it is not only misleading and reductive but profoundly self-limiting. The real story of Ireland and the Irish is so much bigger.

How can one possibly understand the violence that traumatize Ireland during the Elizabethan era without understanding the passion of the religious wars that devastated Europe in the mid to late sixteenth century? English terror of the Counter Reformation becomes both motive and alibi for atrocities in Ireland. Come forward to the age of revolution in the eighteenth century and witness the impact of the American and French revolutions on Irish political thinking, or three decades later the influence of Daniel O’Connell’s mass political movement on a generation of European reformers, including the English Chartists.

In America the Scots–Irish community would help to frame the American constitution and give the new United States one of its most famous presidents, Andrew Jackson, the son of Presbyterian immigrants from Ulster, who went on to lead America in a war against Britain. Jackson’s bitterness against the British, stemming from the Revolutionary War, was as vivid as anything expressed by the Catholic enemies of the king.

In the aftermath of the Famine of 1845–8 Catholic migrants became one of the largest populations in the cities of America’s east coast. In New York, at the famous Cooper Union, a building synonymous with great American political rhetoric, the Irish who had arrived as ragged peasants a decade before were commanding large audiences, and the attention of the
New York Times
, for their rallies against British rule in Ireland.

By the middle of the 1850s there were more Irish living in New York than in Dublin, and they brought with them the techniques learned in Daniel O’Connell’s campaigns, creating the machine politics that helped the Democratic Party control many of the country’s major cities. A century later this community would also provide one of the most notable American presidents of modern times, John Fitzgerald Kennedy.

In the modern age we can see how the Anglo-Boer war, World War I, and the advent of the European Community in the aftermath of World War II, would all play a part in making the Ireland of today. The most dramatic event of recent modern history – the attack on the Twin Towers in New York on 11 September, 2001 – changed utterly the international environment in which militant nationalism operated. After that, any lingering attachment to the bomb and the gun on the part of Sinn Féin and the IRA became an impossible prospect.

At every turn I took while making the television series I was aware of international connections. The first Irish were people who had come from elsewhere, probably around 8000
BC
, part of the great human migrations that first reached Britain, and then crossed the Irish Sea. The elaborate passage tombs they built at Newgrange in County Meath belong to an Atlantic pattern stretching from Spain to Scandinavia; the amber with which Ireland’s bronze age jewellery is so beautifully decorated reached the island via a Baltic trading route, perhaps from as far away as eastern Germany or Poland; resin from the Pyrenees was used to style the hair of an Irish king born 2500 years before Christ.

Our ancestors were nomadic peoples with highly developed hierarchies, whose struggle for survival was underpinned by their faith in a spiritual world. They worshipped the gods of nature as they drove their cattle in search of grazing. Along the same routes that brought precious materials such as amber came stories and ideas. Standing in the gloom and damp air of a Newgrange tomb, I heard Dr Gabriel Cooney, one of Ireland’s leading archaeologists, describe the information superhighway of 3000
BC
.

‘I think that, like today, people would have tended to put things in their own context, these early farmers building this monument would probably have had stories of places that were far away, and would have realized how things worked in other areas.’ We shared a Celtic culture with peoples in Britain and continental Europe. The Irish Sea witnessed a burgeoning exchange of trade and ideas with the peoples who inhabited Cornwall, Wales and Scotland. It was far easier to sail to a Welsh coastal village from County Wexford, or from the Antrim coast to the Mull of Kintyre than it was to travel from the east to the west of Ireland by foot.

One of the great historical absolutes of my childhood was that because Ireland had never been conquered by the Romans she somehow remained aloof from the changes that radically altered British society. It was Julius Caesar who invented the myth of Hibernia, a land of winter into whose mists civilized men dared not venture. There may have been a self-serving element to this, the future emperor of the Romans justifying his own reluctance to embark on a potentially costly conquest. And while there is no evidence of any large Roman military operation against Ireland, there were plenty of traders willing to ignore the grim warnings and visit Ireland’s east coast. Harbours grew up to service the boats that carried Irish leather to clothe the Roman legions. The Irish cattle barons of the plains became rich in the process. As Ned Kelly, keeper of antiquities at the National Museum of Ireland, told me: ‘The cattle barons start getting notions of grandeur and they become the important provincial kings of early medieval Ireland. You have the establishment of dynasties at that time, and they continued in power for hundreds of years afterwards. They were looking to model themselves on the Roman emperors.’

The traffic in goods and ideas was a two-way process and the greatest Roman export to Ireland was spiritual. The faith that would come to be seen as an indivisible part of Irish identity was carried across the seas from Roman Britain, where it had become the state religion on the orders of the Emperor Constantine. Through the efforts of saints such as Patrick, Declan of the Decies and a host of others, the Roman faith was spread through the island, creating monastic centres around which faith and commerce could thrive, and where an aesthetic revolution would take place. Scholars came from the continent to be educated at the great monastery of Clonmacnoise in County Westmeath.

The exquisite
Leabhar Gabhaile
– the Book of Invasions – is an example of the artistic and literary magnificence that emerged from the scriptoria of the Irish monasteries. This seventh-century account of the roots of the Irish weaves us into the stories of the ancient world and emphatically, and with considerable self-satisfaction, concludes that the Irish are a people of many origins, the best possible combination of numerous peoples! The Book of Invasions fuses legends, oral history, biblical stories and no end of vivid imagination to create an overarching myth of Irish origin. Its historical significance is what it reveals about how our ancestors saw their place in the world: they did not see themselves as cut off, or insignificant, and they were confident of their identity.

That cultural confidence would be challenged by the Vikings in the nineth century, and by the Normans two hundred years later. I travelled to Normandy and to Norway to understand the dynamics that had propelled the invaders towards Irish shores. It is too tempting to see them in familiar stereotype, as the demons who prowled the texts of our primary school history lessons, violent louts who despoiled our land of saints and scholars. They were certainly all of that, but there was more to these rough warriors than rapine and pillage.

It is also worth remembering that the lot of the Irish peasant varied little whether it was a Gaelic, Viking or Norman boot upon his neck. Warring Irish kings inflicted hideous damage on the monastic settlements, and monasteries themselves went to war over the control of land. In one notable battle between the monks of Clonfert and Cork there was, according to the Irish annals, ‘an innumerable slaughter for the ecclesiastical men and superiors of Cork’.

Labelling the Vikings or Normans as evil foreigners is poor history. How much more fascinating to journey into the world that made them, and to see their descent on Ireland as a process inspired by the imperatives of their own societies. In the snow-dusted fjords of the Norwegian autumn, I met Professor Jon Sigerdsson of the University of Oslo, who described a Viking society straining under economic pressures in the sixth and seventh centuries
AD
. As one of the world’s foremost experts on Viking culture, he believes a lack of resources in Norway, and the ingrained Norse habit of wanting to be better than the next man, helped inspire the attacks on Ireland.