Read The Stranger in the Lifeboat Online

The Stranger in the Lifeboat 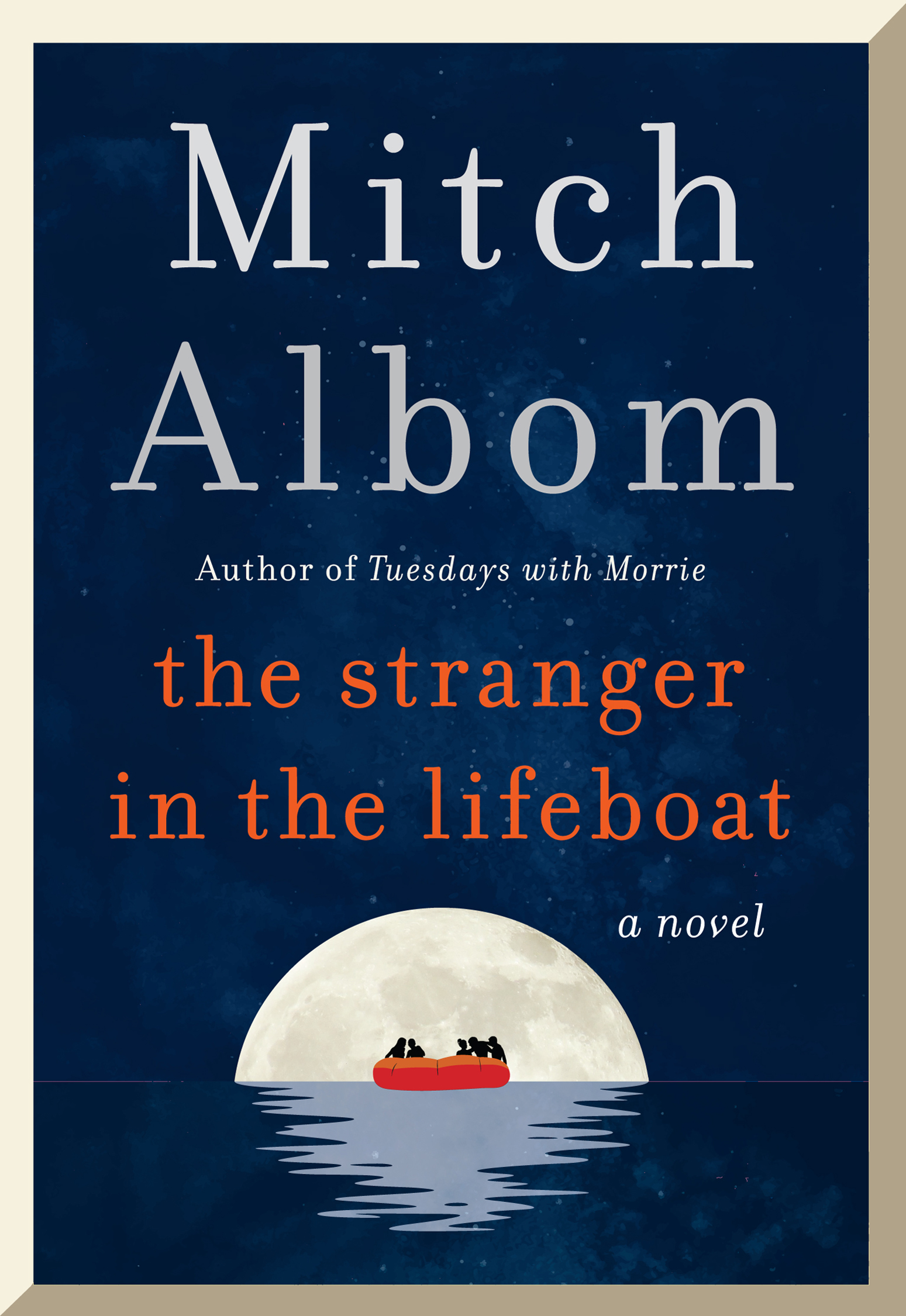 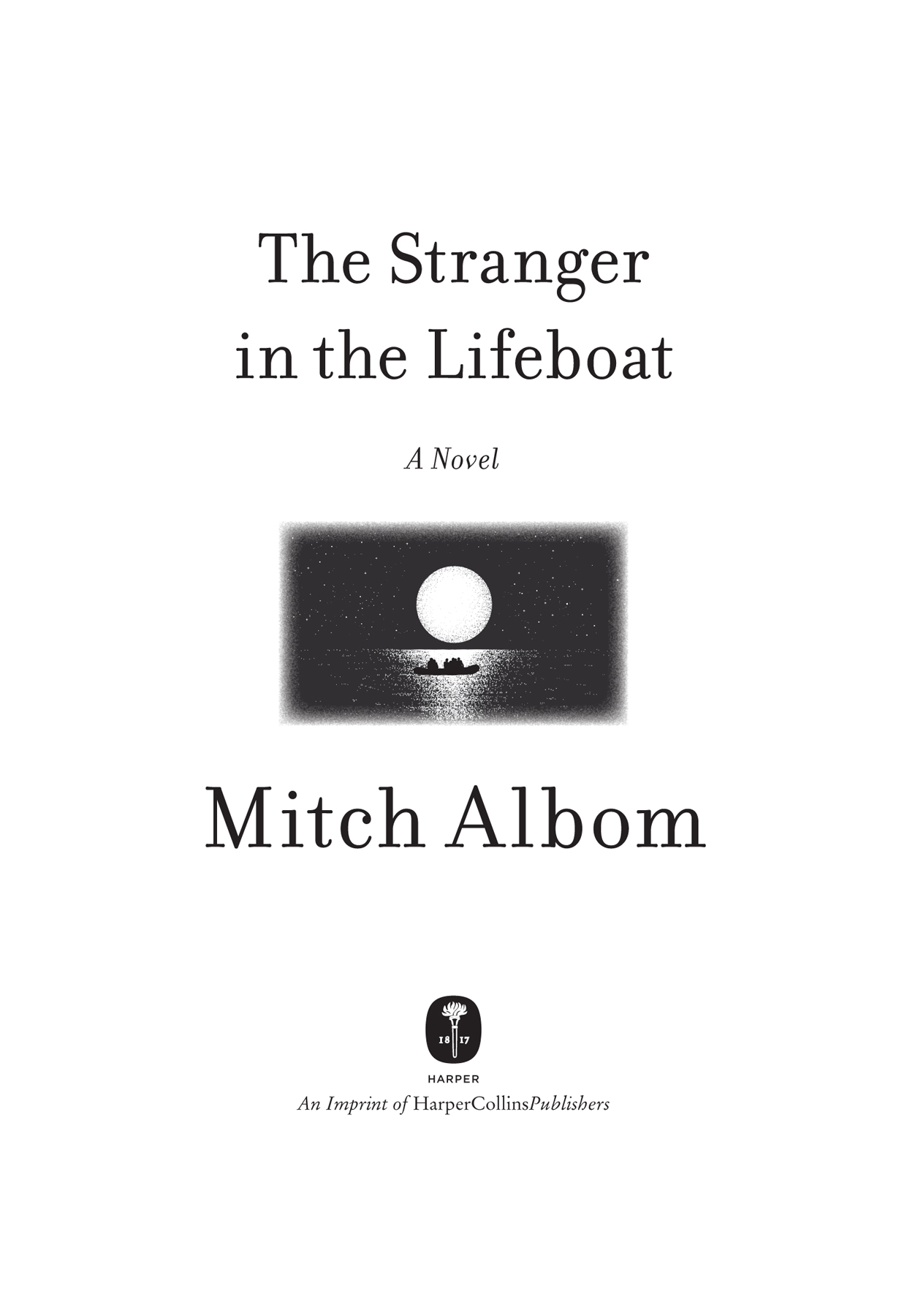 To Janine, Trisha, and Connie, who show me, every day, the stunning power of belief

When we pulled him from the water, he didn't have a scratch on him. That's the first thing I noticed. The rest of us were all gashes and bruises, but he was unmarked, with smooth almond skin and thick dark hair matted by seawater. He was bare-chested, not particularly muscular, maybe twenty years old, and his eyes were pale blue, the color you imagine the ocean to be when you dream of a tropical vacationânot the endless gray waves that surround this crowded lifeboat, waiting for us like an open grave.

Forgive me for such despair, my love. It's been three days since the
Galaxy
sank. No one has come looking for us. I try to stay positive, to believe rescue is near. But we are short on food and water. Sharks have been spotted. I
see surrender in the eyes of many on board. The words
We're going to die
have been uttered too many times.

If that is to be, if this is indeed my end, then I am writing to you in the pages of this notebook, Annabelle, in hopes you might somehow read them after I am gone. I need to tell you something, and I need to tell the world as well.

I could begin with why I was on the
Galaxy
that night, or Dobby's plan, or my deep sense of guilt at the yacht exploding, even though I cannot be sure of what happened. But for now, the story must begin with this morning, when we pulled the young stranger from the sea. He wore no life jacket, nor was he holding on to anything when we spotted him bobbing in the waves. We let him catch his breath, and from our various perches in the boat, we introduced ourselves.

Lambert, the boss, spoke first, saying, “Jason Lambert, I owned the
Galaxy
.” Then came Nevin, the tall Brit, who apologized that he could not rise for a proper welcome, having gashed his leg trying to escape the sinking vessel. Geri just nodded and balled up the line she had used to tug the man in. Yannis offered a weak handshake. Nina mumbled “Hi.” Mrs. Laghari, the woman from India, said nothing; she didn't seem to trust the newcomer. Jean Philippe, the Haitian cook, smiled and said, “Welcome, brother,” but kept a palm on the shoulder of his sleeping
wife, Bernadette, who is wounded from the explosion, badly wounded, I believe. The little girl we call Alice, who hasn't spoken since we found her clinging to a deck chair in the ocean, remained silent.

I went last. “Benji,” I said. “My name is Benji.” For some reason my voice caught in my throat.

We waited for the stranger to respond, but he just looked at us, doe-eyed. Lambert said, “He's probably in shock.” Nevin yelled, “
HOW LONG WERE YOU IN THE WATER
?” perhaps thinking a raised voice would snap him to his senses. When he didn't answer, Nina touched his shoulder and said, “Well, thank the Lord we found you.”

Which is when the man finally spoke.

“I
am
the Lord,” he whispered.

The inspector put out his cigarette. His chair creaked. It was already hot on this Montserrat morning, and his starched white shirt stuck to his sweaty back. His temples were throbbing from a hangover headache. He gazed at the thin, bearded man who'd been waiting for him when he arrived at the police station.

It was Sunday. He had been in bed when the call came.
A man is here. He says he found a raft from that American yacht that blew up.
The inspector mumbled a curse. His wife, Patrice, groaned and rolled over on her pillow.

“What time did you get home last night?” she mumbled.

He dressed without answering her, made instant coffee, poured it into a Styrofoam cup, and kicked the door frame as he left the house, banging his big toe. It still hurt.

“My name is Jarty LeFleur,” he said now, sizing up the man across the desk. “I am the chief inspector for the island. And your name isÂ .Â .Â .”

LeFleur sighed. “What is it?”

LeFleur wrote it down, then lit another cigarette. He rubbed his head. He needed aspirin.

LeFleur looked up to see the man staring at a desk photo of LeFleur and his wife swinging their young daughter over a beach towel.

“Is that your family?” Rom asked.

“Don't look at that,” LeFleur snapped. “Look at me. This raft. How did you know it was from the
Galaxy
?”

“It's written on the inside.”

“And you just found it, washed up on the beach?”

LeFleur was sweating. He moved the desk fan closer. The story was plausible. All kinds of things washed up on the north shore. Suitcases, parachutes, drugs, fish-aggregating contraptions that swept into the currents and floated across the North Atlantic.

Nothing was too strange to roll in with the tide. But a raft from the
Galaxy
? That would be a major event. The huge luxury yacht had sunk last year, fifty miles from Cape Verde off the West African coast. It made news around the world, mostly because of all the rich and famous people who'd been on board. None of them were found.

LeFleur rocked back and forth.
That raft didn't inflate itself.
Maybe the authorities were wrong. Maybe someone had survived the
Galaxy
tragedy, at least briefly.

What do you say to that, my love? Maybe under normal conditions you laugh or make a wisecrack.
You're the Lord?
Buy the drinks.
But alone in the middle of this ocean, thirsty and desperate, well, it unnerved me, to be honest.

“What did he just say?” Nina whispered.

“He said he was the
Lord
,” Lambert scoffed.

“You got a first name, Lord?” Yannis asked.

“I have many names,” the stranger said. His voice was calm but husky, almost hoarse.

“She's right,” Geri said. “The water temperature is sixty-seven degrees. You can't live in that for three days.”

Geri is the most experienced sea person among us. She was an Olympic swimmer when she was younger and has that take-charge toneâconfident, curt, intolerant of stupid questionsâthat makes people pay heed.

“
DID YOU FLOAT IN SOMETHING
?” Nevin yelled.

The stranger looked at Yannis when he said “for Christ's sake,” and Yannis closed his mouth, as if trying to suck the words back in.

“I am here,” the stranger said.

“Haven't you been calling me?”

We glanced at one another. We are a pathetic-looking lot, faces blistered by the sun, clothes crusted by salt water. We can't fully stand up without falling into someone, and the floor smells of rubber, glue, and vomit from our retching. It is true, most of us, at some point, thrashing in the waves that first night or staring at the empty horizon in the days that followed, have cried out for divine intervention.
Please, Lord!Â .Â .Â . Help us, God!
Is that what this new man meant?
Haven't you been calling me?
As you know, Annabelle, I have struggled with faith much of my life. I was a dutiful altar boy, like many Irish kids, but the church and I parted company years ago. What happened with my
mother. What happened with you. Too much disappointment. Not enough comfort.

Still, I never considered what I would do if I called for the Lord and He actually appeared before me.

“Is there any water you can share?” the man asked.

“God is thirsty?” Lambert said, laughing. “Great. Anything else?”

“Perhaps something to eat?”

“No!” Nina yelled abruptly, her face contorting like a denied child. “Let him talk.” She spun toward the man. “Are you here to save us?”

His voice softened. “I can only do that,” he said, “when everyone here believes I am who I say I am.”

No one moved. You could hear the smack of the sea against the boat's sides. Finally, Geri, who is too practical for talk like this, surveyed the group like an annoyed schoolteacher.

“Well, buddy,” she said, “you let us know when that happens. Until then, we better adjust our food rations.”

REPORTER:
This is Valerie Cortez, aboard the
Galaxy
, the spectacular yacht owned by Jason Lambert. The billionaire businessman has assembled some of the biggest names in the world for a weeklong adventure, and he's here with us now. Hello, Jason.

REPORTER:
You've called this extravaganza “the Grand Idea.” Why?

LAMBERT:
Because everyone on this ship has done something grand, something to shape their industry, their country, maybe even the planet. We have technology leaders, business leaders, political leaders, entertainment leaders. They're big-idea people.

LAMBERT:
Well. Ha. I don't know about that.

REPORTER:
And you brought them together for what reason?

LAMBERT:
Valerie, it's a $200 million yacht. I think a good time is possible!

LAMBERT:
No. Seriously. Idea people need to be around other idea people. They spur each other to change the world.

REPORTER:
So this is like the World Economic Forum in Davos, Switzerland?

REPORTER:
And you hope many grand ideas come out of this trip?

LAMBERT:
That, and some quality hangovers.

REPORTER:
Hangovers, did you say?

LAMBERT:
What's life without a party, Valerie? Am I right?